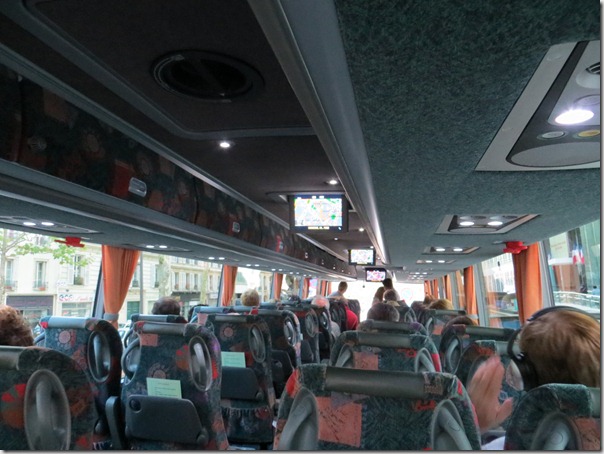 Time to switch gears and head out of town. The really nice thing about the Rick Steves tours we have taken, and this one also, is that the bus is always able to seat far more people than are on the tour, meaning that you are not crowded. 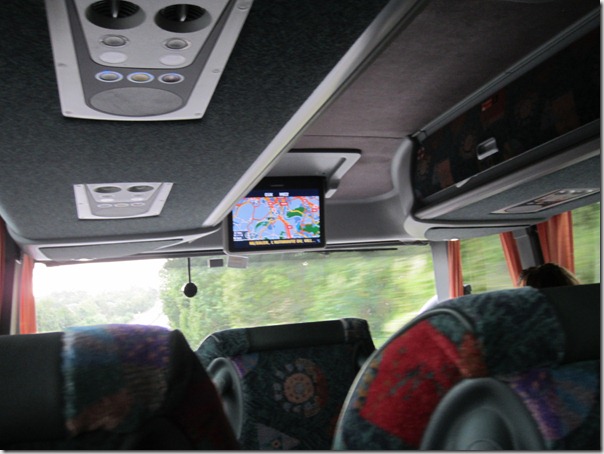 Linda likes to sit up front, while I prefer the back. It really doesn’t matter if couples sit together or not, as there is plenty of room, especially in the back half of the bus. This one has a husband and wife driving team from the Netherlands. I liked the monitors above the aisle that showed the GPS screen of where we were. 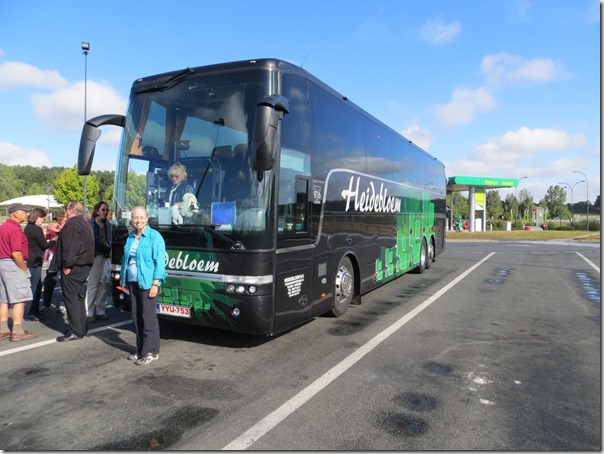 To say the bus is very nice is an understatement. 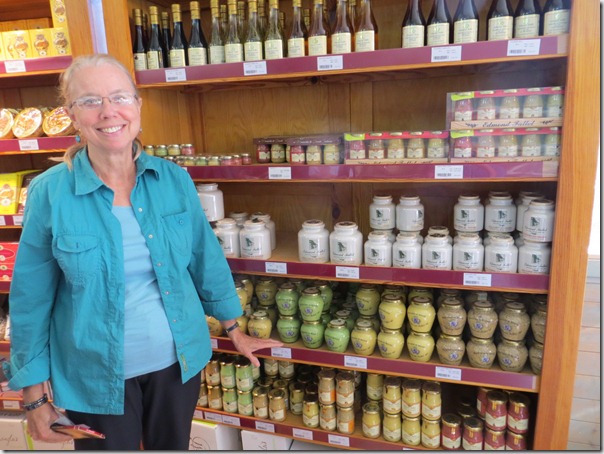 Linda in front of the Dijon mustard section at one of our rest stop breaks. There wasn’t a lot of driving today, the first section being the longest at 2 1/2 hours. What they do is stop every hour and a half for about 30 minutes, so it isn’t like you are sitting on the bus for hours at a time with no break. And no, we did not buy anything, though there were a number of the group who wanted the real thing rather than the gray poop-on we have in the States. My lamb brains appetizer I ordered with dinner had some superb mustard on it, so I got my taste even if Linda didn’t. 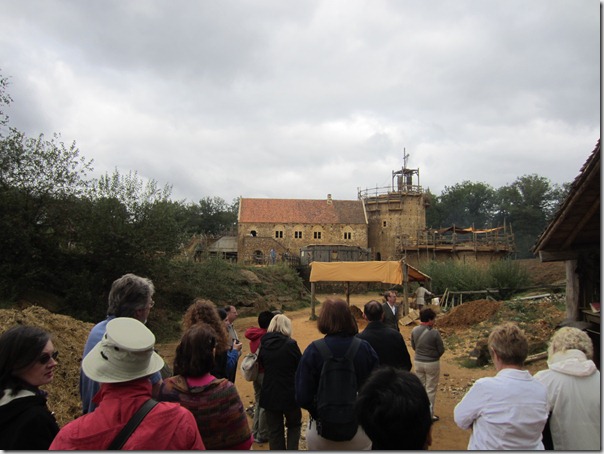 Some things have to be visited to be appreciated, or to even realize the exist. The brochure for this tour said we would be stopping at a 13th century castle that was being built today. A better description be, you will be traveling back in time to the 13th century to see a castle being constructed. 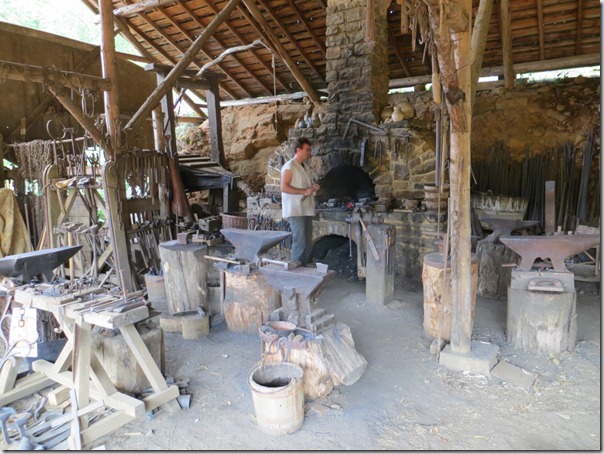 Okay, so it’s a blacksmith shop, lots of historical sights have them. This one is different. Not only has everything you see been made on this site, they even smelt their own iron beside the shop. They do make a few concessions to modern times, such as wearing steel toed boots, and many of the artisans and craftsmen wear safety glasses, and some of the rock cutters wear breathing masks, but otherwise, back in the 13th century, that’s where you are. 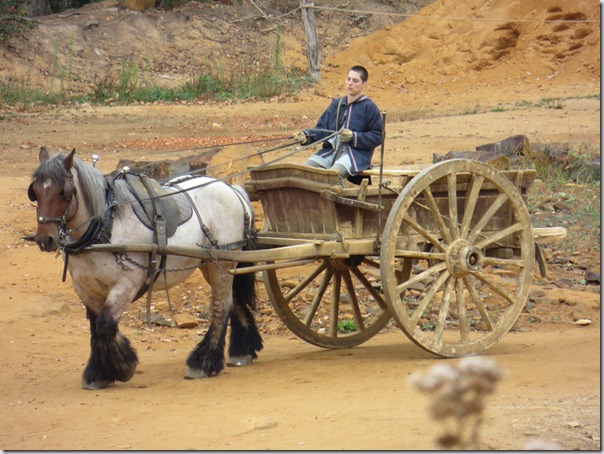 Rock being transported from the quarry to where it is is formed and cut. 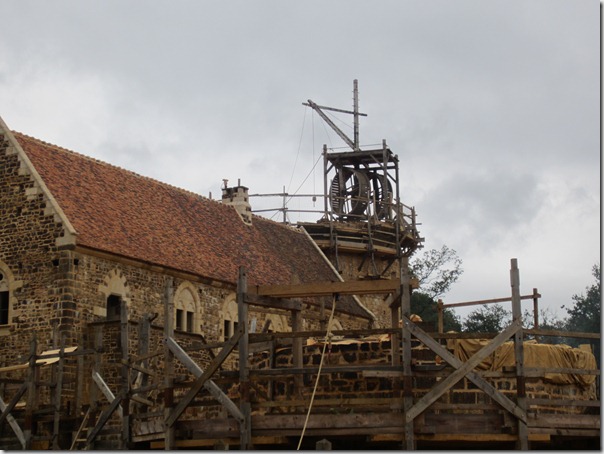 One of the towers being constructed. Men stand in the large wheels and as they walk the wheel rotates, the rope is wound on the axle and the load of rock, mortar, or whatever is hoisted to the top of the tower. 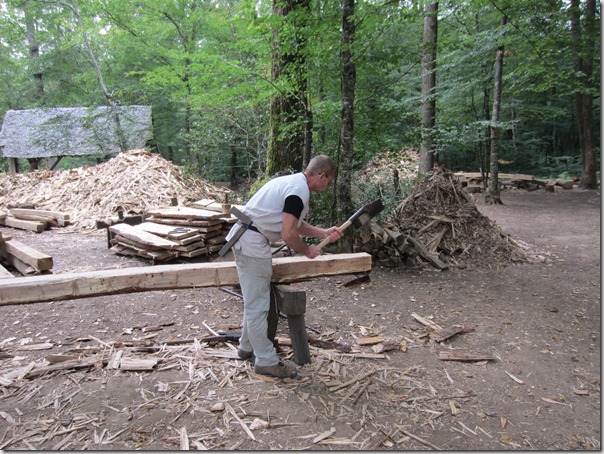 In the 13th century if you wanted a beam, you didn’t just have the lumberyard deliver it. You couldn’t even go to the saw mill, as it would be a case of what is a saw? No, if you wanted a beam, or anything else from wood, you used bladed hand tool to laboriously shape a tree into a beam. For boards, they split the tree into planks. There is living history, and then there is Living History. 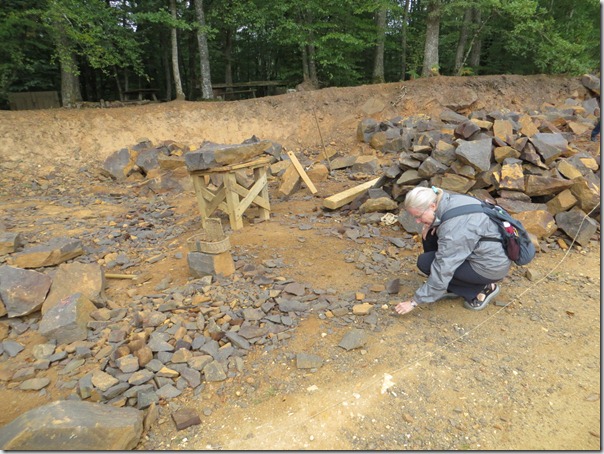 In the quarry area you know who just had to find the perfect rock to carry around for the next several months. I noticed there were also several other ladies picking up small rocks in the same area. This must be one of the those women things. 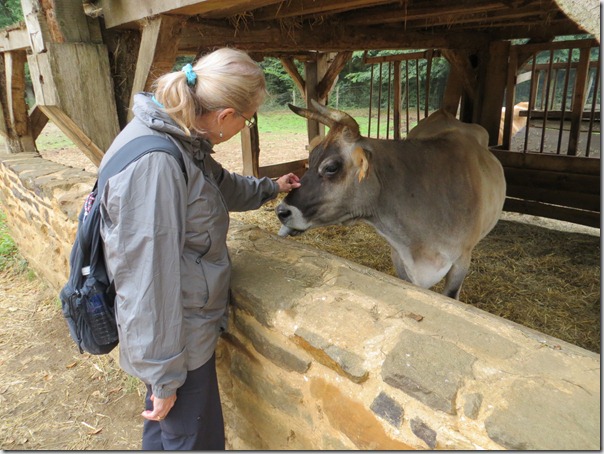 Linda found a friend. In case anyone wants to check out Guedelon, <a href="http://www.guedelon.fr/index.php?lg=en" target="_blank">here</a> is the link to there website. If for some reason that link doesn’t work, just do a search for Guedelon. It is an example of how the vision of one person can end up affecting far more lives than he ever imagined. 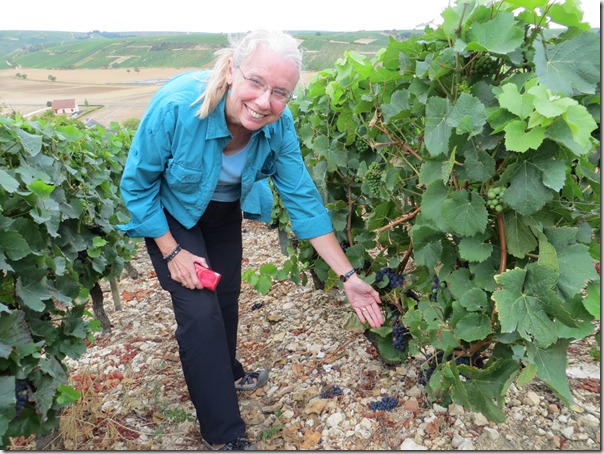 A quick stop along the way to check out the local vineyards. They asked us to please not sample the grapes, and much to my surprise, my wife actually did what they asked. I suspect the fact she knew I would write about her criminal conduct if she tried to sample a grape probably had something to do with her good behavior. 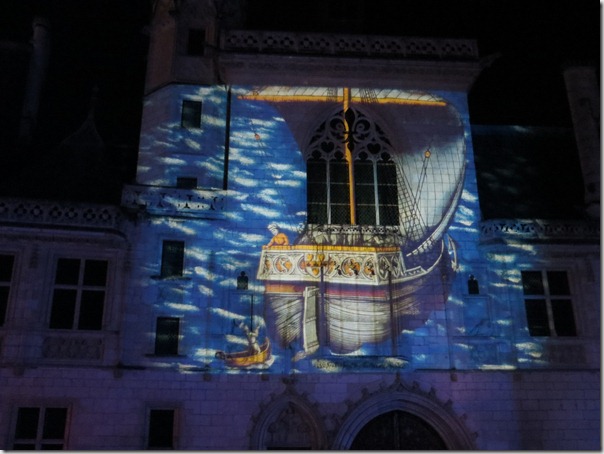 I’ll spare you the photos of dinner tonight. We did enjoy a real multi-course French meal, with all the courses. Linda started with some kind of potato pastry while I had the lamb brains. Then we both had Coq a Vin with local style noodles, next came a goat cheese course, of which I got to eat both mine and Linda’s, and for dessert it was an apple something or other for Linda and hazelnut crème brulee for me. All of which was washed down with what was made from all those grapes we saw growing alongside the road.

The photo above is part of a light show they do on weekends in the summer in the town we are staying in, Bourges. Narrow twisting medieval streets, lots of half timbered houses, uphill, downhill and “we’re going the wrong way” is part and parcel of towns like these. It was another great day on the road to adventure we call Life.
Posted by Bob and Linda at 12:18 AM

Email ThisBlogThis!Share to TwitterShare to FacebookShare to Pinterest
Labels: Bourges