The title says it all. We have over 500 photos. We have been there and seen only the tiniest fraction of what is known as “The Longest Day.” Brittany and Normandy, there is no way a few days can even begin to give one an appreciation of what is here. We will be back. We owe it to the thousands of young men who lie in rows above a beach called Omaha. They and the hundreds of thousands who returned to America gave us the opportunity. That was what today was all about. Once again we took over 500 hundred photos between us and you will see just a few. 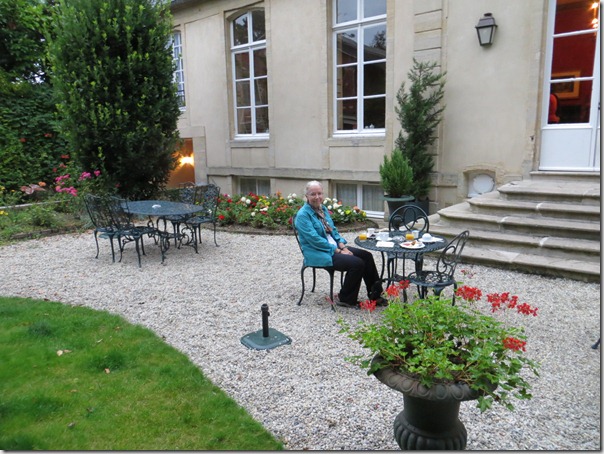 When we arrived for breakfast this morning, those who were already eating were inside. To Linda, eating in Europe means outside, so that was where we went, and it wasn’t long before the other tables around us were filled with tour members. We certainly don’t claim to be leaders, but we certainly do claim to do our own thing. A number of times during conversations this past week we would be asked how we found out about something or other. We always tried to answer, but in the end I really think it comes down to experiences. We have spent so much time over here that our experiences build upon each other and we do things without even thinking about it. It’s akin to being in your first week of fulltime RVing or being in your seventh year. You’re just as excited, but how you look at things is far different. 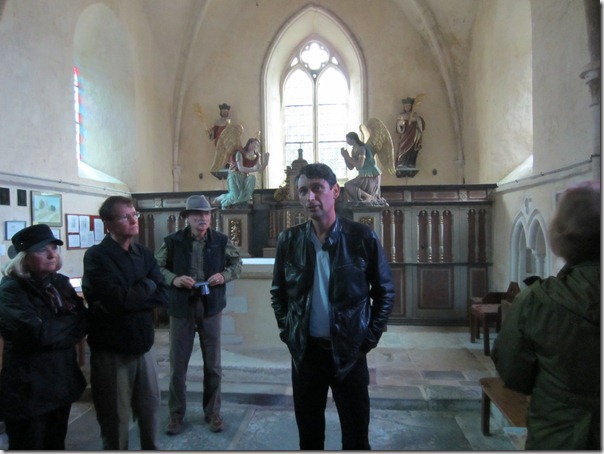 I need to say right now that if you are looking for a review of all the famous places associated with D-Day, buy a DVD and watch that. This is Nigel, our guide, and a very interesting British chap. We are inside a small church that was an even smaller part of the battle that day, but one which clearly illustrated that events such as D-Day are simply a large canvas that is made up of myriad seemingly insignificant and unrelated events. You only have to take a quick glance at Jerry, arms crossed and with a look of intense concentration, to understand what today meant to us. 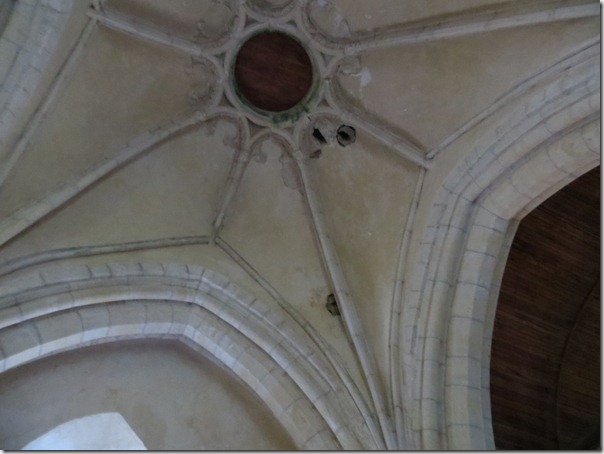 This church was used as a hospital, one where Americans treated Germans, G.I.’s and Tommy’s, though they did keep the Germans in the front of the church and the Allies in the back. Still, any man wounded in battle deserves a chance to be treated for his wounds. There are two small black holes in the ceiling of the church, one just to right of the large dark circle and one further down near next to the rib. Mortar rounds, both duds. Luck or something else? 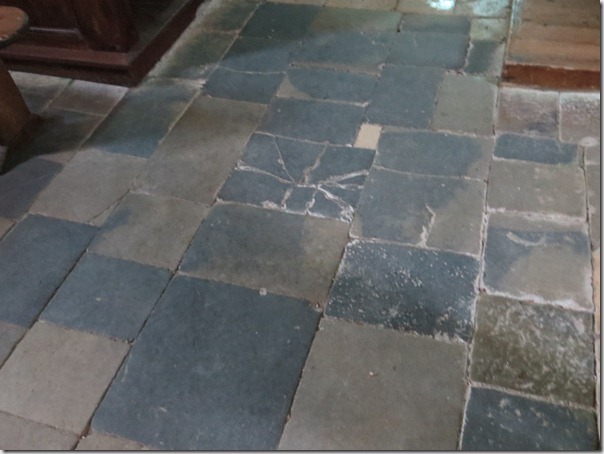 A cracked stone in the floor of the Church. That small black hole higher up was from the mortar round that penetrated the roof. The cracked stone is where it landed in the Church, which on June 6, 1944 was  a hospital full of wounded soldiers and those caring for them. Just one small incident that day. Change it and hundreds of others, and how different our world might be today. 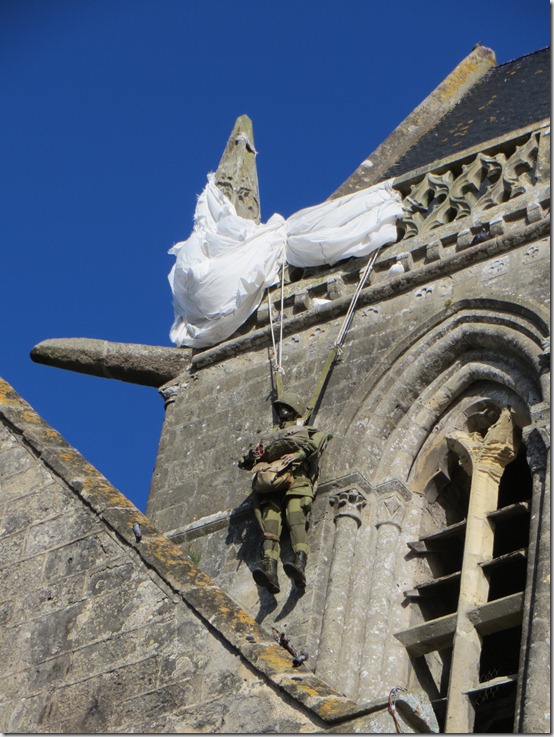 Another town, another Church. It was true that an American paratrooper got hung up on this church. He was cut down by the Germans, taken prisoner, and later escaped. It has become part of the lore of D-Day, in books, movies and here at the church. With one small exception as Nigel pointed out. He was actually hung up on a spire on the other side of the church, but since the parking lots and all the visitors are on this side of the church, that is where the parachute and mannequin are displayed.  It’s a concept that is universal, never let the actual event get in the way of tourist dollars, besides, few tourists even known that things weren’t as they are shown to be. Hey, for all I know the town may have hired an American consultant to find a way to get more more Americans to visit the town and this was his idea. After all, isn’t that the American way? 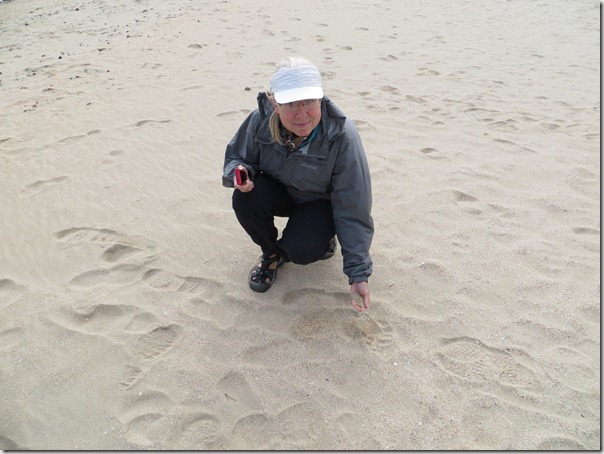 Linda touching the sand on the nearby beach. 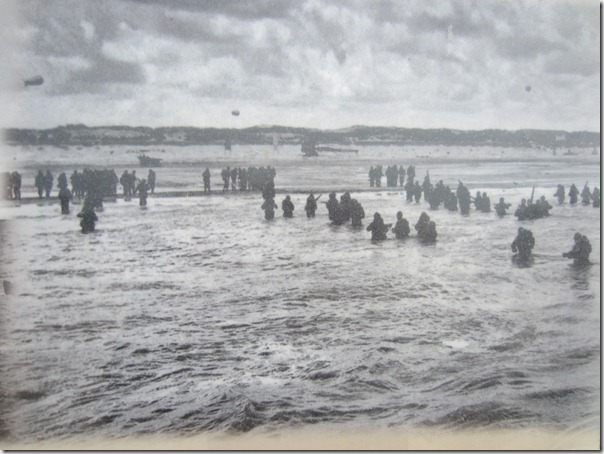 That same beach on a June day in 1944. Abraham Lincoln said it for the ages: The brave men, living and dead, who struggled here have consecrated it far above our poor power to add or detract. 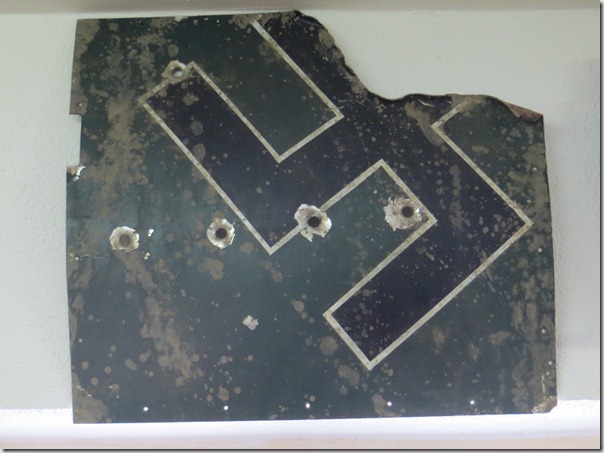 Men fought here. Men died here. Politicians start wars, young men pay the price, and thousands to millions of others die or are maimed. My only wish is that any politician who wants to fight a war, no matter what the reason, no matter which country, and especially the US, whether caused by others or not, has to send every relative he or she has, no matter how distant, to fight in the very front lines as long as war rages. In olden days the kings led their men into battle, now the cowardly Presidents and Generals stay in the rear claiming they are to important to risk their lives in battle. They are not important, they are merely gutless. And to think we elect these cowards as our leaders. End of rant number 1. 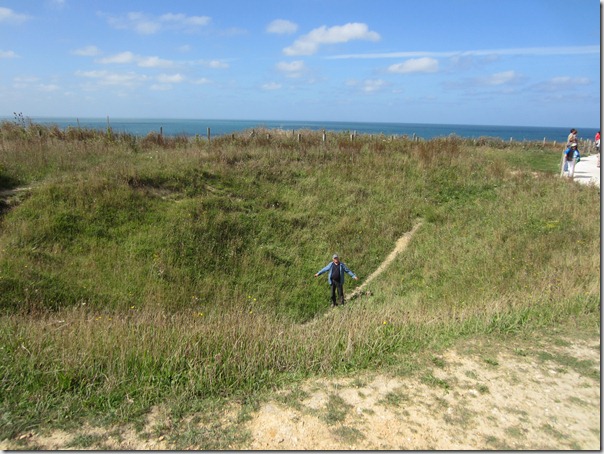 Battleships are big. 16 inch guns are huge. I am standing in a crater made by the explosion of one of those shells. Nearby are enormous concrete gun casements that were blown to pieces by the explosion of one of these shells, the huge pieces of concrete scattered around as though tossed by the hand of a giant. D-Day, June 6, 1944, Normandy, France. It is something that our parents and those of our generation instinctively think of every June 6th, but what about the younger people. Do they even think every July 1, 2 and 3 that tens of thousands of Americans were killed and maimed in the Battle of Gettysburg in 1863? It is said that those who forget the past are doomed repeat it. Even today our young men are dying in the Middle East so another of our continuing list of, want to be elected President but don’t want to do what a President should do, President’s, can appear powerful and presidential. Are we really that stupid, or do we simply not care. And which is worse? End of rant 2. 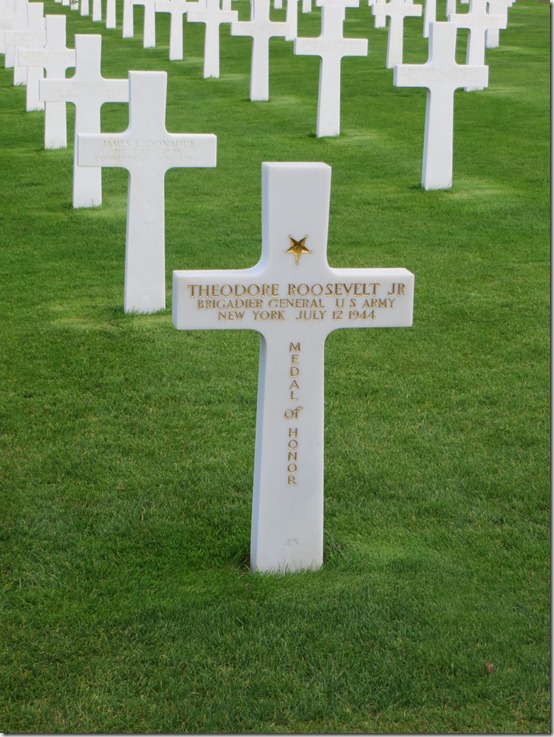 The absolute height of political arrogance and hypocrisy. The cousin of President Franklin Delano Roosevelt. He died of a heart attack. And he gets the Medal of Honor. Politicians are the lowest form of slime on the face of the earth and this man and his Presidential cousin are the lowest of the low. It could be said  to dishonor every other soldier who was awarded the Medal of Honor. But it can’t. Let the scum that is the Roosevelt family burn in Hell. Let those that were rightly awarded the Nation’s highest honor ascend to the Heavens. 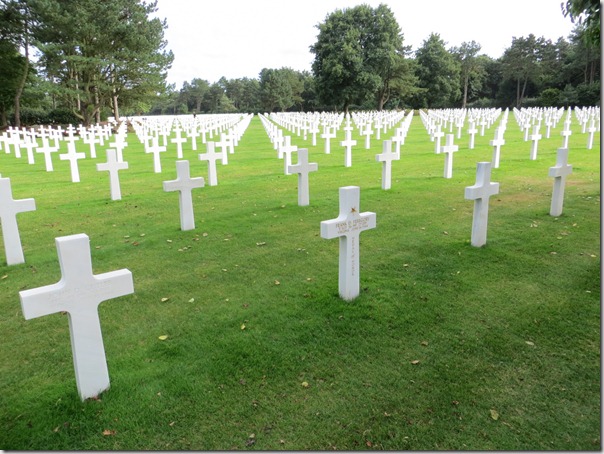 The row on row of those who are buried on the hill above Omaha Beach. Medal of Honor recipient Frank D. Peregory’s grave in the front center.
His Medal of Honor citation reads:
Citation:


On 8 June 1944, the 3d Battalion of the 116th Infantry was advancing on the strongly held German defenses at Grandcamp-Maisy, France, when the leading elements were suddenly halted by decimating machine gun fire from a firmly entrenched enemy force on the high ground overlooking the town. After numerous attempts to neutralize the enemy position by supporting artillery and tank fire had proved ineffective, T/Sgt. Peregory, on his own initiative, advanced up the hill under withering fire, and worked his way to the crest where he discovered an entrenchment leading to the main enemy fortifications 200 yards away. Without hesitating, he leaped into the trench and moved toward the emplacement. Encountering a squad of enemy riflemen, he fearlessly attacked them with hand grenades and bayonet, killed 8 and forced 3 to surrender. Continuing along the trench, he single-handedly forced the surrender of 32 more riflemen, captured the machine gunners, and opened the way for the leading elements of the battalion to advance and secure its objective. The extraordinary gallantry and aggressiveness displayed by T/Sgt. Peregory are exemplary of the highest tradition of the armed forces

Six days later he was killed during the continued fighting in Normandy. 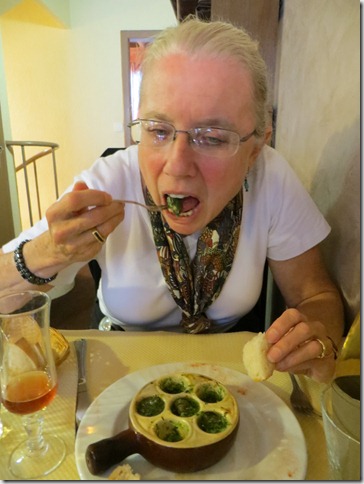 Today we were tourists visiting Normandy. Tonight Linda enjoyed another plate of escargot. Tomorrow we return to Paris. Life is good.

Email ThisBlogThis!Share to TwitterShare to FacebookShare to Pinterest
Labels: D-Day