And It Got Even Better


It was still dark this morning when a few of us made the long walk up the many steps to the entrance of the Abbey. Julie had arranged for us to be able to sit and watch the morning service, and seven members of our small group were the only ones there. We were led into the Church where the monks and nuns were kneeling in silent prayer. Then for five full minutes a monk stood next to us and rang the masive bell. Then the monks and nuns stood and chanted Psalms. When it was over we realized that none of us had taken any photos. It didn’t matter because it truly was one of those times when photos, videos or recordings wouldn’t even begin to convey what we experienced. The term, “once in a Lifetime experience” is bandied about far to often. Therefore I’ll put it this way, this was a ONCE IN A LIFETIME EXPERIENCE. 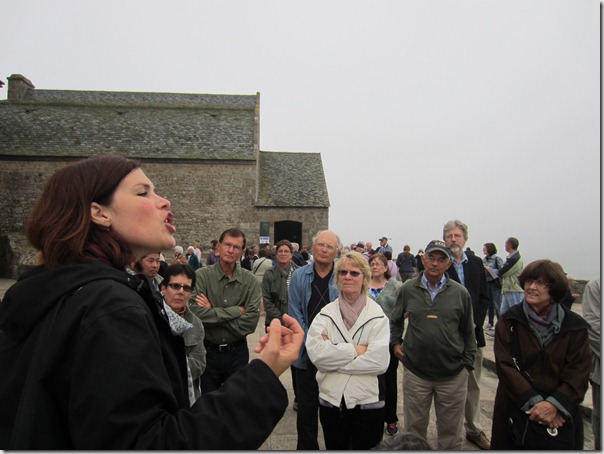 After breakfast we toured the Mont with a local guide who was very good at not only pointing out the obvious, but who also talked about the not so obvious. From the look of concentration on our faces you can tell that we hung on virtually every word. 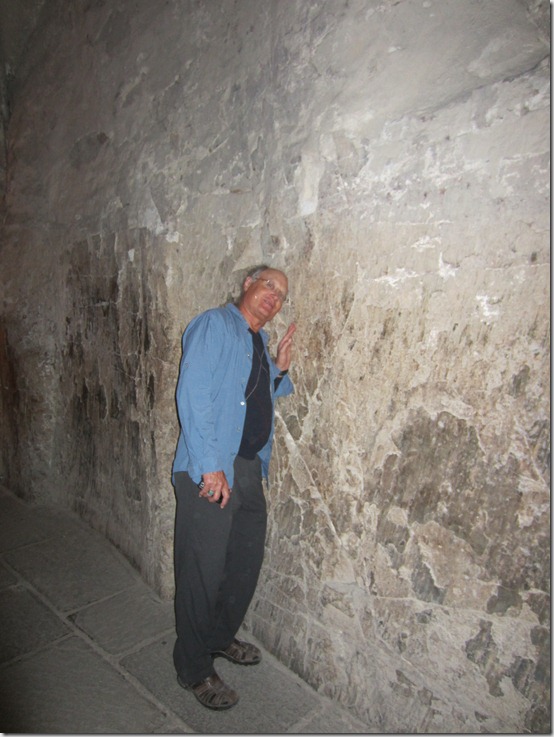 Deep inside the Abbey, the rock of the Mont has been used to form the wall of a small room. This photo is of and for me. If you never dare to dream, your dream can never come true. This is proof that dreams do come true. 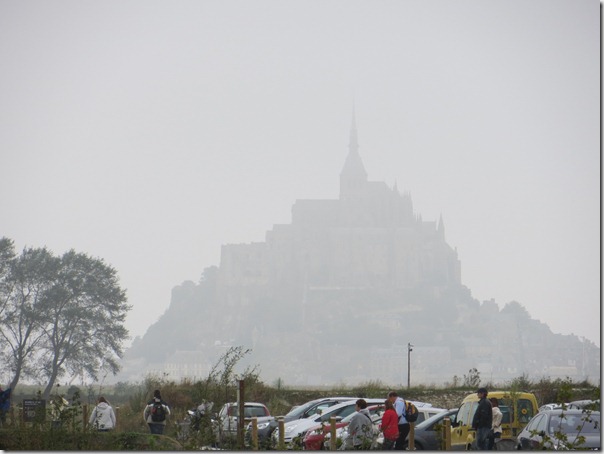 All things come to an end, and so it was with our visit to Mont Saint Michel. The fog was in this morning and as we stood in the parking lot, waiting to board the bus, the Mont was already fading in the distance. What can never fade are the memories of the past 18 hours. Picture books and TV programs show you what is there. But being there, it is an experience I cannot adequately put into words, but one I shall never forget. 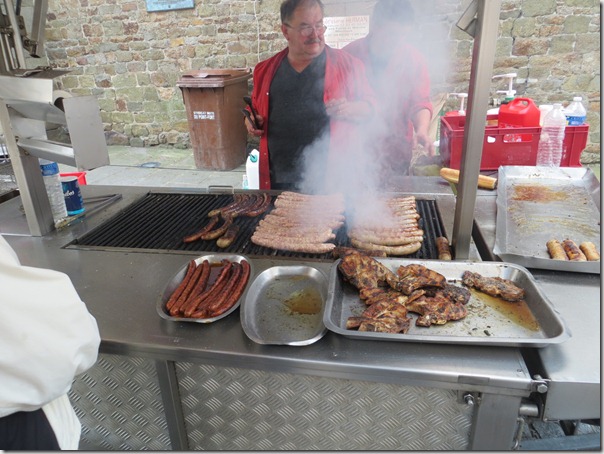 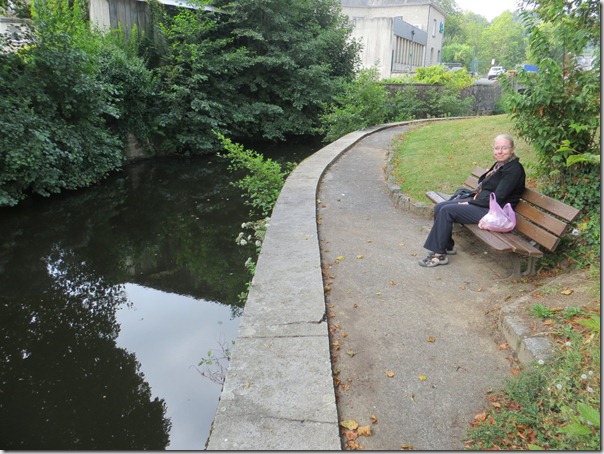 This where we ate our lunch. There is nothing wrong with those who prefer to only travel in the US. After all, it makes it easier for us to find places in Europe like this. And why is it that towns with places like this are the norm in Europe, but something we rarely ever find in the US? 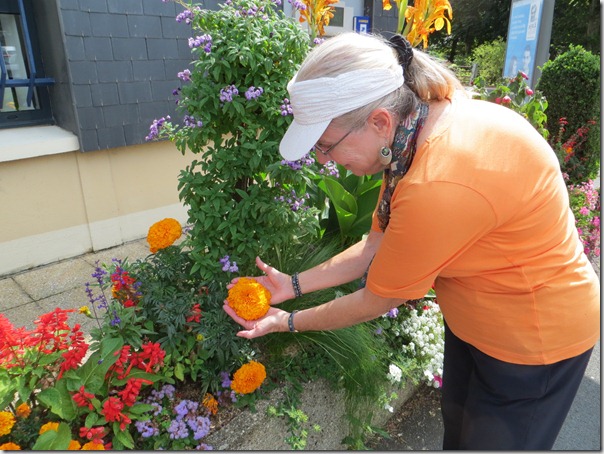 Flowers everywhere you go. So many flowers that Linda rarely stops any more to take photos. What she is more likely to do, is to commune with the flowers. To cuddle up to them and shower them with affection. I may have to stop taking a shower every morning and let the dirt build up on me, then douse myself with flower seeds. Problem is that once they started blooming I’d probably have to shoo her to get any time to myself as all she’d ever want to do is to cuddle. Guess I’ll forget that idea. 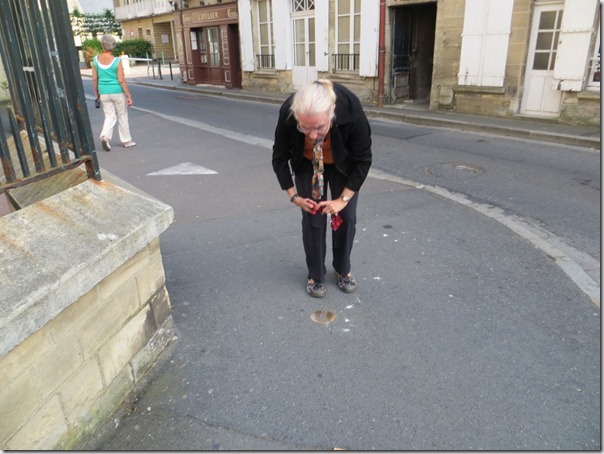 In the background, a French woman elegantly striding down the sidewalk. In the foreground we see an elegantly dressed, beautiful American woman taking a photo of a pigeon poop splattered bronze emblem in the sidewalk.  I think I might have an inkling as to why Europeans always seem to be able to spot Americans 1.6 kilometers away. 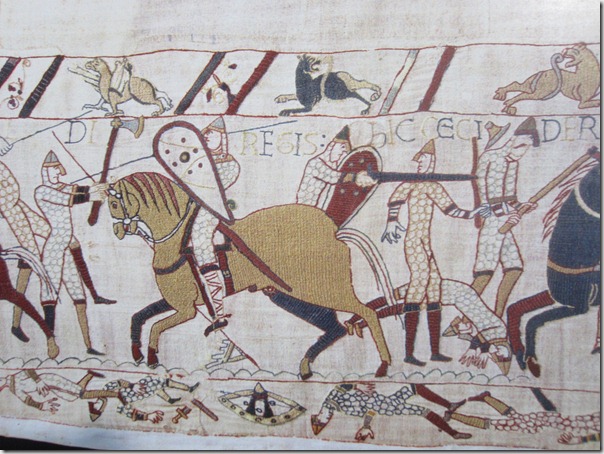 The Bayeux Tapestry this is not, as no photos are permitted anywhere in the museum. It certainly wasn’t what I was expecting, and it ended up blowing me away, as it seemed to do to everyone else in our tour group. I realize I seem to over use the phrase, “had to be seen to be appreciated”, but darn it, that is just exactly what so much of what we are seeing and experiencing is. It is not a huge rug like wall hanging as most of the tapestries we have seen are. This is narrow, on light colored linen and with panels that progressively tell the story of what we Americans know as the Norman Conquest. As you walk along an audioguide relates what is on each panel. The section above shows just how horrific the Battle of Hastings was, note the dead along the bottom of the panel. You can bet that when we are in London we will be making a day trip to the site of the Battle of Hastings. 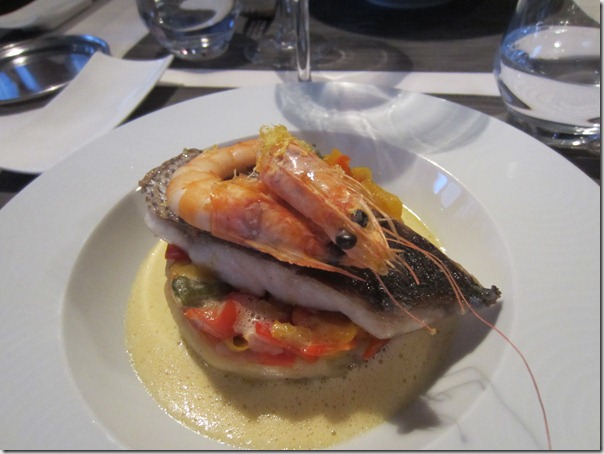 Food photo of the day. Two huge prawns, a fish filet, a mixture of peppers, onion and garlic atop a potato cake and surrounded by a butter and cream sauce. As long time readers know, this is something that Linda would have once declined to eat, in fact she would probably have asked for it to be taken away. Her comment as we left the restaurant, “ If you could learn to make that, I’d eat eat it five nights a week.” We may not know exactly what French cooking is, but we sure do know what it tastes like. All this gets me to thinking that if I actually could learn to cook food like this Linda might quickly become jealous of all the other women who would want me to cook for them. Maybe I could have a harem! In your dreams Bob, in your dreams. 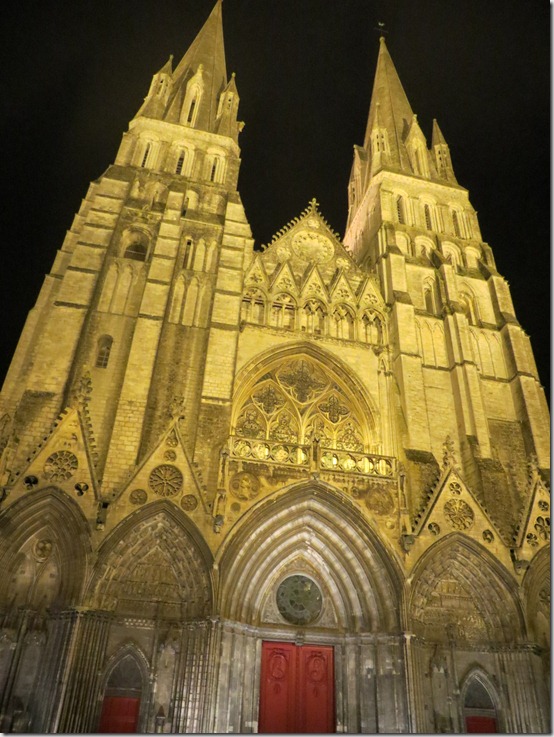 This is not Mont Saint Michel, it is the cathedral in Bayeux where we are spending two nights. At 10:30 at night there were several dozen other people also taking photos just as I was. The cathedral was open during the day and illuminated at night. Earlier we had listened to the massive pipe organ fill the cathedral with music, making it a treat to the ears. Now it was treat  to the eyes. We took over 500 photos today, about two hundred more than we usually do. You saw ten of them. We have millions of memories, with still more to come tomorrow when we have a day at the beach.
Posted by Bob and Linda at 2:36 PM