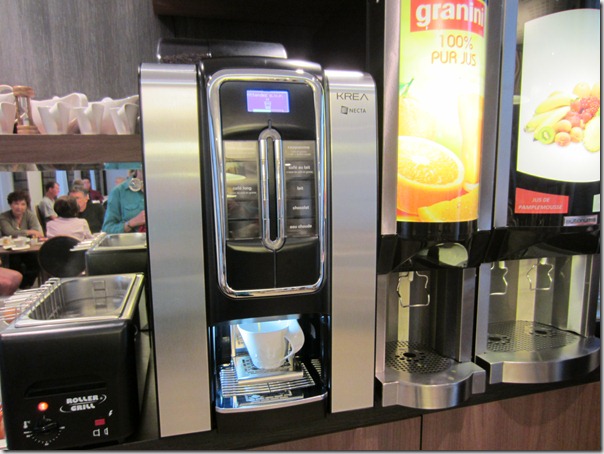 Breakfast came very early this morning, but there was a cure for making sure Linda was wide awake, this automatic coffee machine. Put your cup in it, select from the many options available (Linda chose cappuccino) and within a few seconds your cup is filled. My adventure was with the machine next to it where I learned that just because it has a photo of mixed fruit on it, if you can’t read French you will get a glass full of extremely sour grapefruit juice. Now that first mouthful was a real wake me up drink. 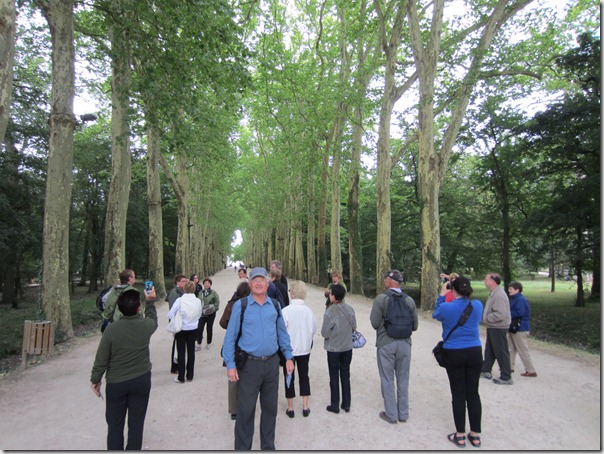 A very long road lined on both sides by trees. People taking photos of it. Not really, it’s what’s up ahead that counts. Because what’s up ahead was the residence of the King’s Mistress, then when the King dies, the Queen after she boots the mistress out, and later other Queens and still later there is a high count of Counts. 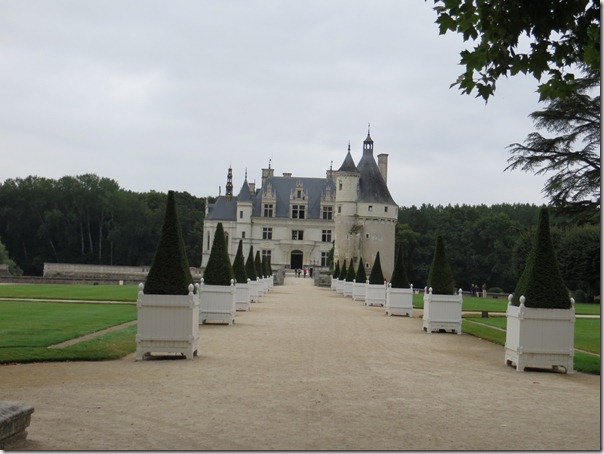 Looks like a castle, not the fighting medieval kind of castle, but the residence type of castle from the 1600’s when peace was more the norm in France. 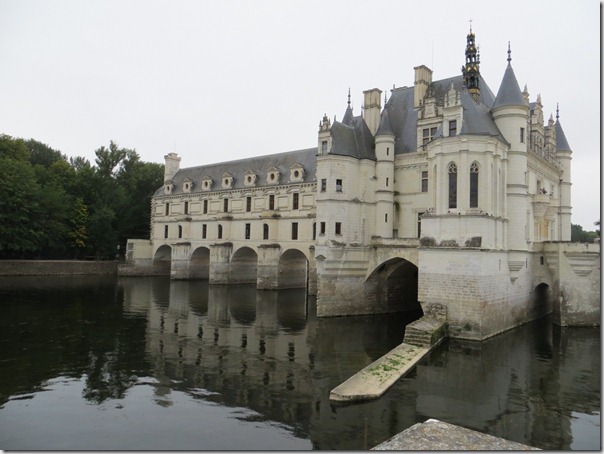 Or is it a bridge with a castle built on it? A little bit of both actually. The castle section to the right came first, which was where the King’s mistress lived. She being rather smart and knowing the King liked to hunt had a bridge built to the left across the river to make easier for him to hunt and to entice him to show up more often. Later the rooms were added to the bridge giving the castle the look it has today. 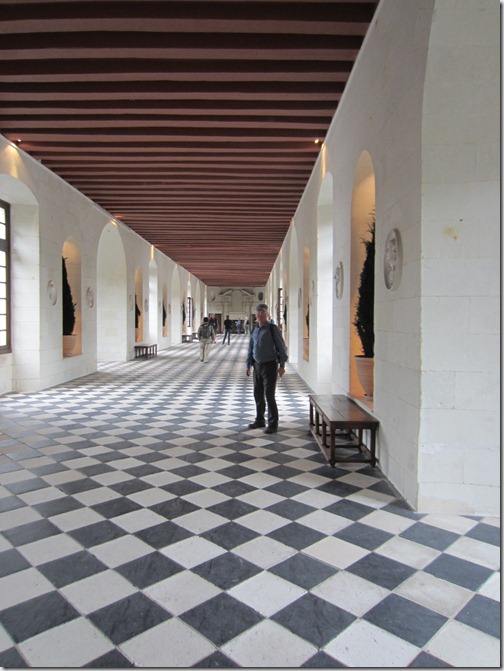 The Grand Hallway, which extends the length of the bridge. The interesting thing about this is the floor. The black squares are slate, the white squares are tuffeau.  Slate is extremely wear resistant, tuffeau is soft and wears easily. So what do you think the surface of the floor is like after centuries of people walking on it. Hills and valley’s isn’t exactly right, but it gives you an idea on just how uneven the surface is. We found it easier to walk on if we just made sure we stuck to putting our feet on just one color. Now that’s something they don’t put into the school history books about old castles. 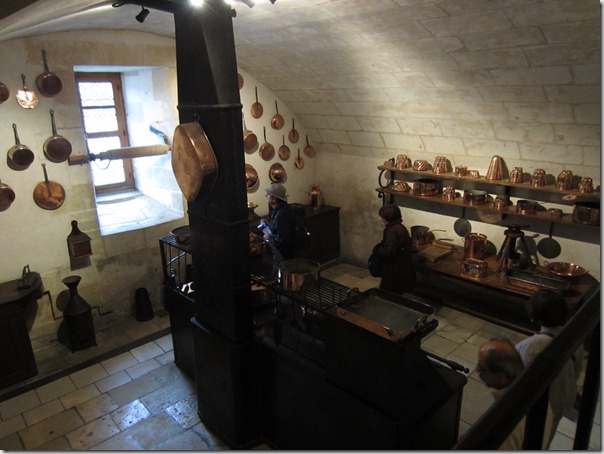 A well equipped 15th century kitchen. Actually this is only one of the many rooms that made up the kitchen of the castle. Located on the lower level of the bridge it had all the latest comforts, including a bakery, a butchery and quarters for the superintendent of the kitchen. There was fresh water drawn from the river just below, and one trust the chamber pots were all emptied into the river on the downstream side of the castle, and a roasting spit that was automated by the use of gears and a weight. 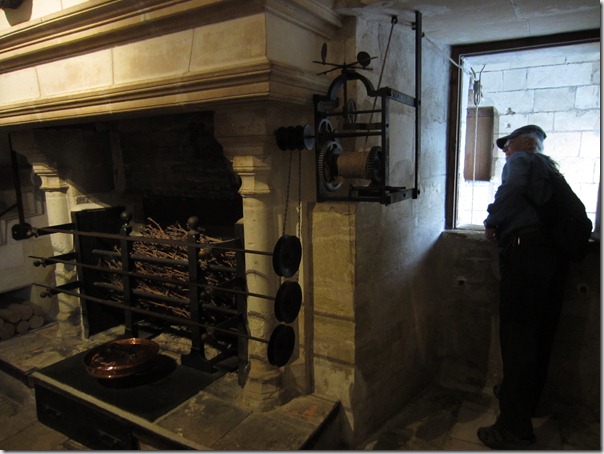 The spit with the weight hanging out the window. 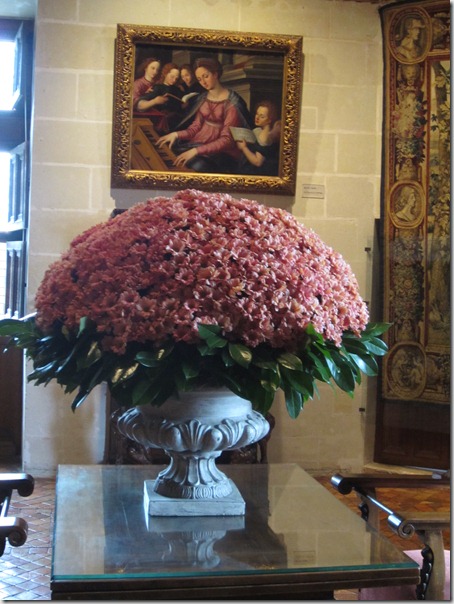 This one is for Linda. She takes so many photos of beautiful flowers where ever we go and I hardly ever include them. These are fresh flowers, and as we learned a little later in our visit, they have a enormous flower and vegetable garden on the castle grounds where all the flowers used throughout the castle are grown and cut. 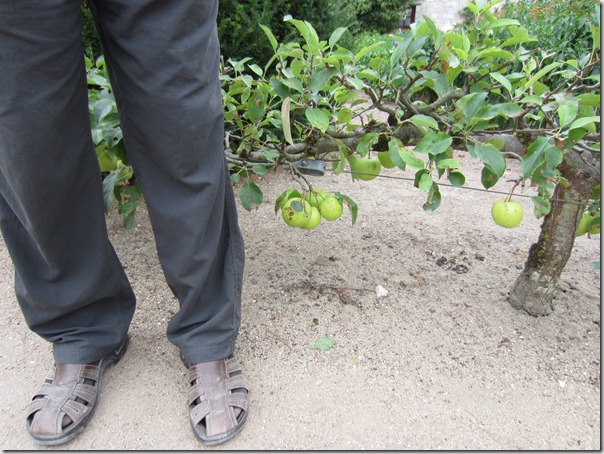 Enough castle photos for now, here’s one of the gardens I was just talking about. This is one of the apple trees. And we kid you not, it is an actual apple tree loaded with apples. They call it espalier and it is where plants are pruned and tied to control their growth. In this case you end up with an 18” high apple tree that has two limbs that grow in opposite directions. That’s the trunk growing out of the ground on the right side. 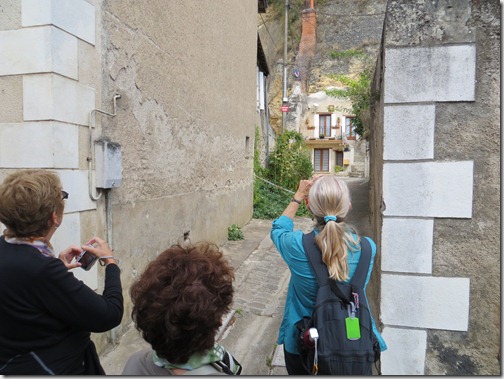 In the nearby town of Blois we ate lunch and then walked to the house where Leonardo da Vinci spent the last three years of his life. This is not a photo of that house. That same soft white rock that was on the castle floor is everywhere in the region. The fact that it is so soft lends itself to another interesting use, cave houses. Just dig back into the cliff, then dig a vertical shaft for a chimney, partition off some rooms and you have yourself a house. Put some windows in the front and you also get a great view of all the tourists stopping and taking photos of your house. 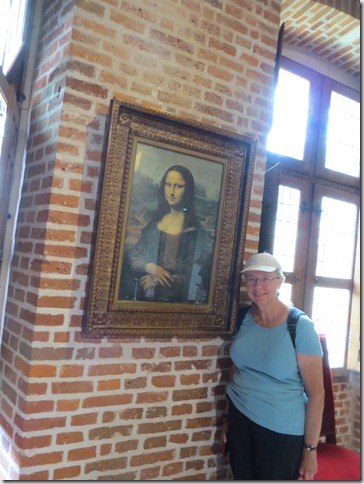 When Leonardo journeyed from Italy to France, he brought very little, but he did bring three paintings, one of which was the Mona Lisa. The original painting of the Mona Lisa is in the Louvre, and no one knows who the Mona Lisa really was. From this photo I have a pretty good idea of who the model was, but I’ll say no more lest I embarrass her. No, I didn’t mean she was as old as the Mono Lisa, I meant she has the same enigmatic qualities as the the Mona Lisa. Almost got myself into big trouble there. 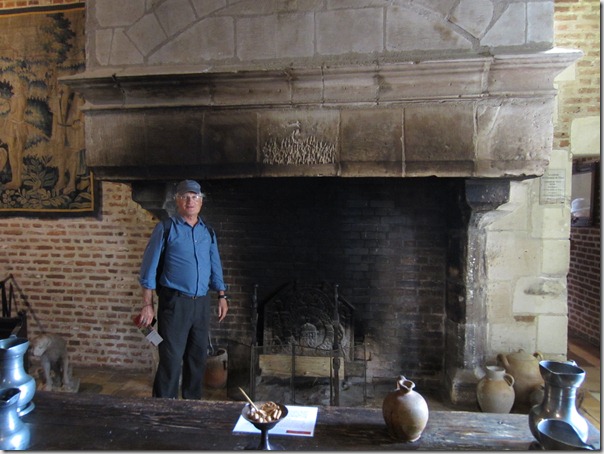 I’ll end the day with this photo. They say Leonardo, one of the most brilliant men to ever live, would come down here to the kitchen and warm himself before the fire. Isn’t it interesting that as Linda took a photo of that very same fireplace an apparition seemed to appear in it. While this fellow is obviously not Leonardo, for one thing Leonardo did not invent was baseball, so he wouldn’t have worn a cap like this obviously brilliant fellow has on. Other than that there are probably more similarities than differences between this unknown apparition and the great man himself.

Back to reality, tomorrow we head off to the north where I get to see and visit one of my life long dreams, Mont Saint Michel. Tomorrow will be a very long day,including a late night group dinner and an early start the following morning, so if I don’t post tomorrow, you’ll know why. But there will be a post for every day of our trip, that I promise.
Posted by Bob and Linda at 1:58 PM