Not interested in genealogy or family history? Proceed with caution. 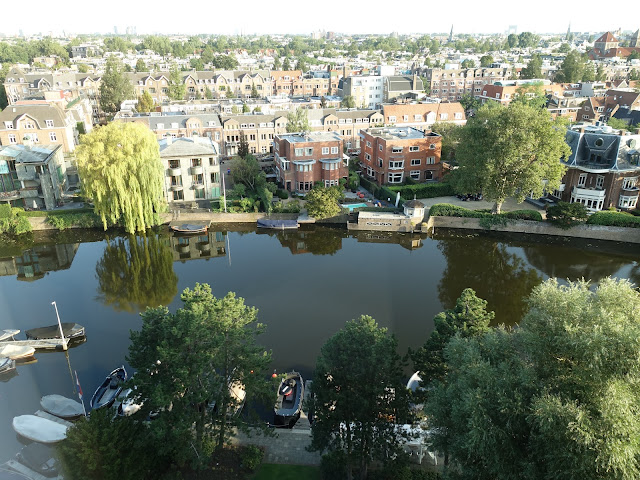 My turn for the morning photo out the window. This is one of those, if there was time to post process it, which there isn't, I could have lightened the very bottom a little and slightly darkened the buildings on the other side of the river. It is something I might have done in the past so I guess you could say I'm just getting old and lazy. Or you could say I just spend my time doing what's important which is having a great time in Europe. This year I've opted for the latter and am happier for it. 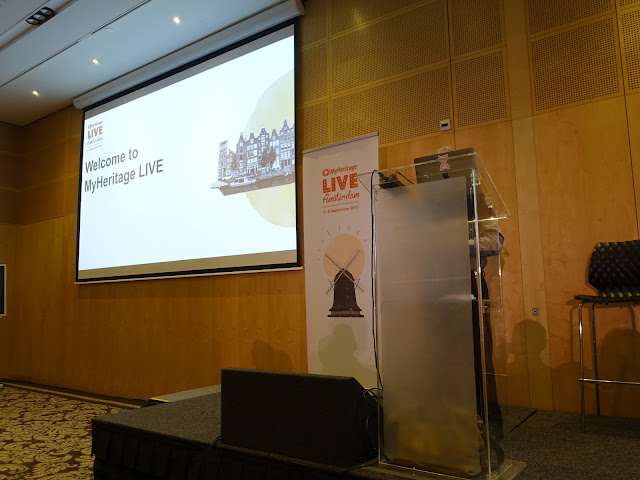 To be blunt about it, there were a lot of things wrong about this year's conference on the technical side particularly. There is a speaker standing behind the podium. Obviously these were left over podiums from talks from NBA players, not normal people. We've joked in the past about how tall the average Dutch person is so maybe these podiums are considered normal sized here. 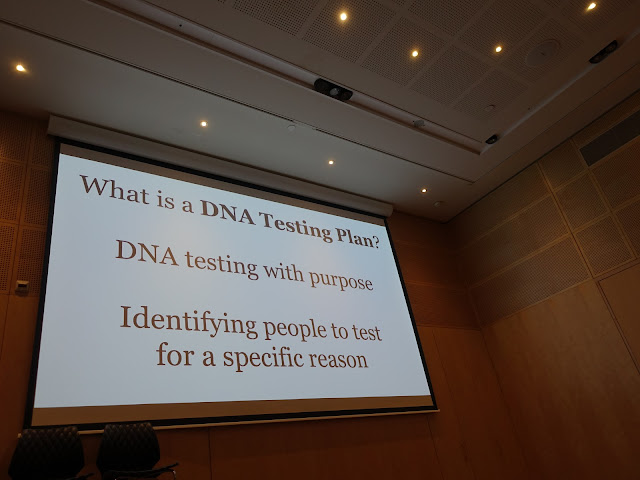 Slide from one of Blaine Bettinger's talks which dealt with formulating a DNA testing plan. In a roundabout way we've talked about this subject at our Retama genealogy group meetings. One of the biggest problems is that people think DNA testing is a one and done proposition. In reality it is anything but that. 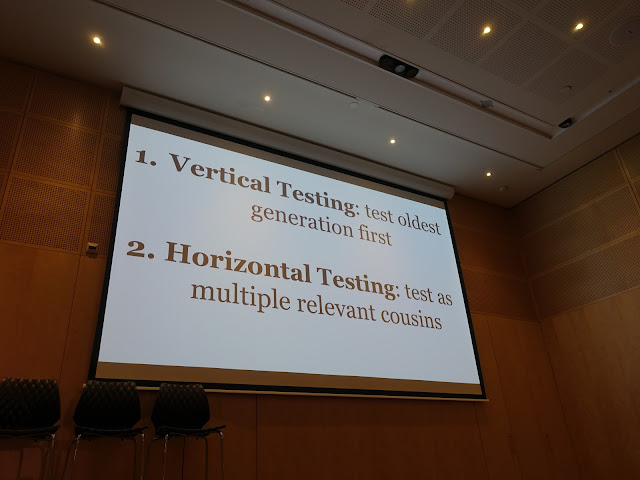 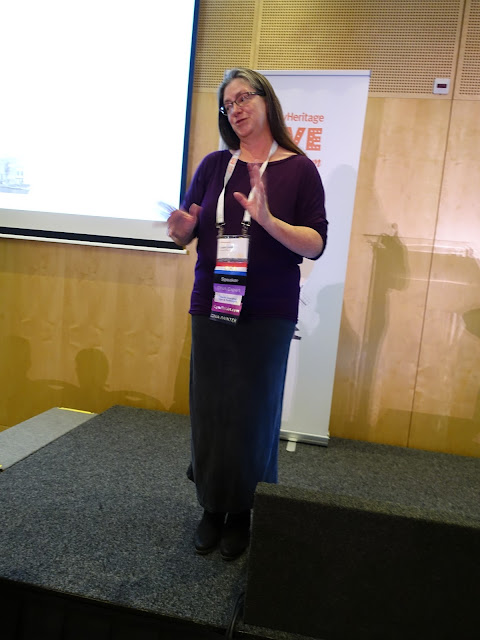 Leak Larkin, who with her clustering approach to shared matches revolutionized how we work with our DNA results. 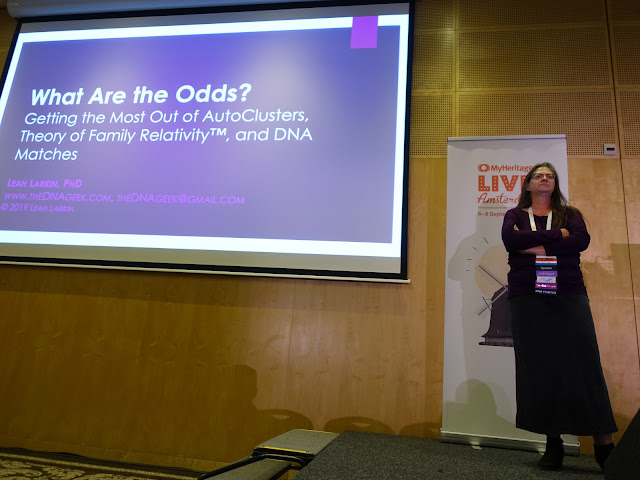 On an intellectual level she is beyond brilliant and so good at bringing things down to the average person's level of understanding. Note her posture. This was taken before she started speaking while she was impatiently waiting for the signal from the LiveStream director to begin. From a past life I can totally understand her attitude. 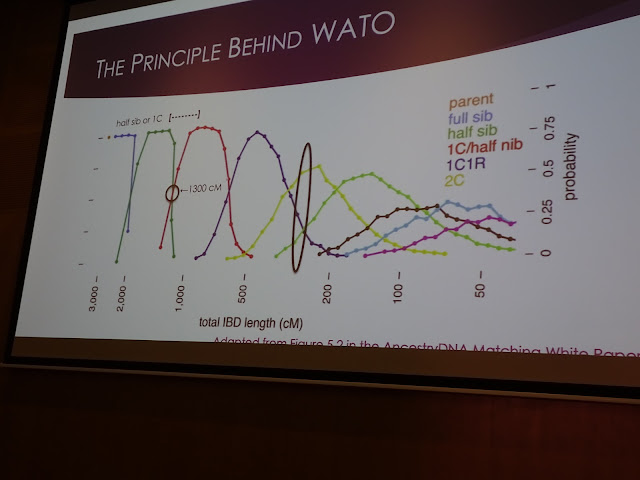 The science behind why you can only do so much with the What Are The Odds tool. 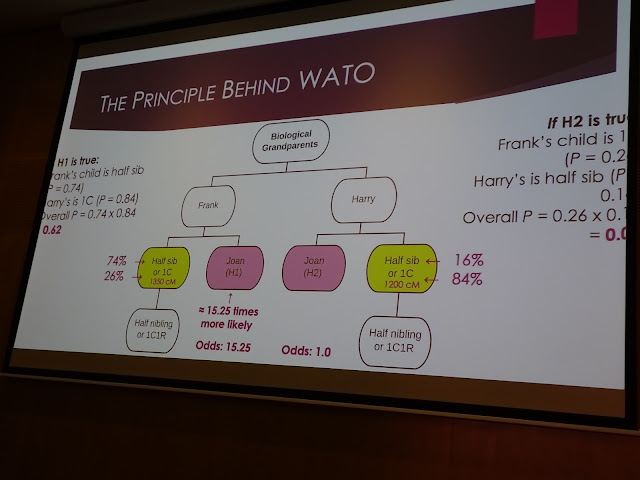 As the title of her slide says, the principle behind What Are The Odds tool. Linda had been intimidated by the seeming complexity of it, so she hadn't tried it. But after the presentation she is now gung ho to use it on one of her brick walls. Now it's my turn to confess that I couldn't understand it at all so I hadn't used it either. Translation: I was just as intimidated by it as Linda. 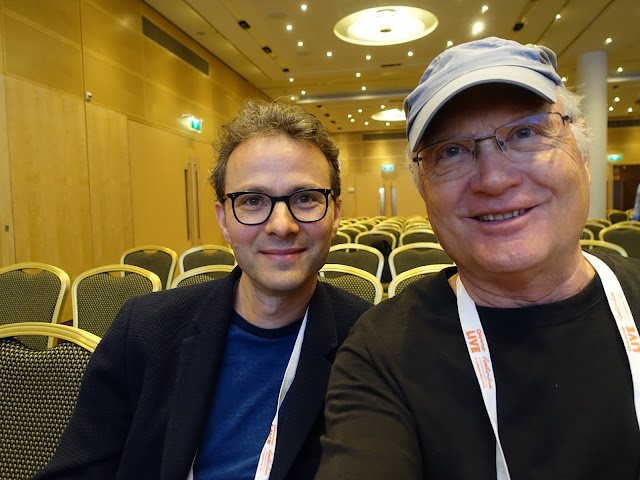 The man behind both DNA Painter and What Are The Odds, Jonny Perl. I'll just say he's even nicer talking one-on-one than he is doing one of his wonderful presentations. And no he didn't do a presentation at the conference, he was just attending. Linda, who doesn't often talk to the experts, went up to him after I left and had a great time talking to him. As an aside about what a neat guy he is, when Linda walked up to him sometime after I left, he asked if she was my husband. He had to remember my name and associate her name with it. It's no wonder he has the smarts to develop tools like that in his spare time. It's things like this that make attending conferences so special. 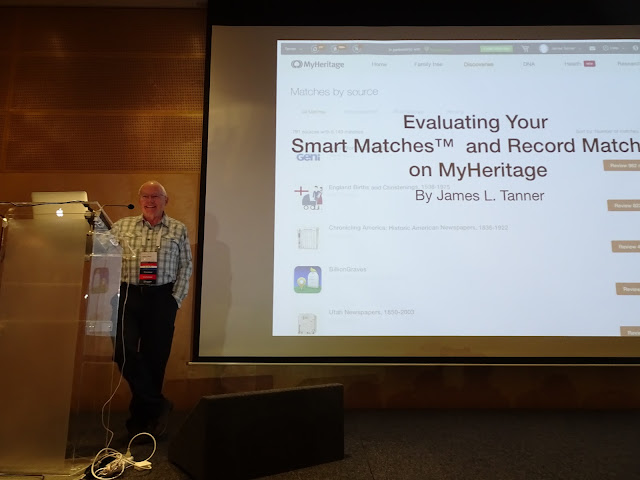 James Tanner has done many videos on genealogy. 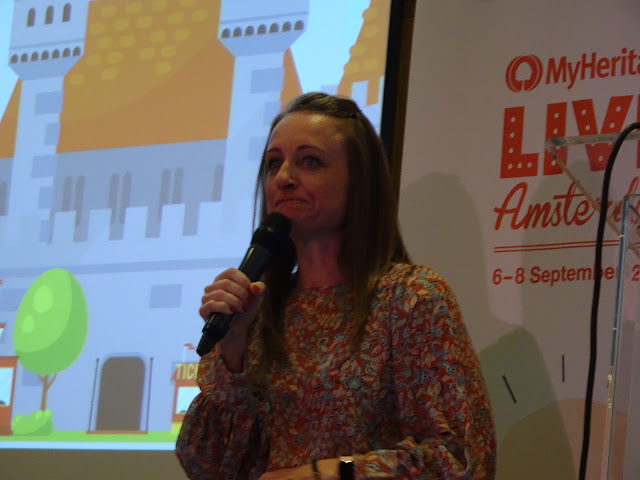 Diahan Southard. She has to be the Energizer Bunny of genealogy lecturers. Going back to Japhet's opening address when he mentioned passion as being the key, she is a living example of what he meant. 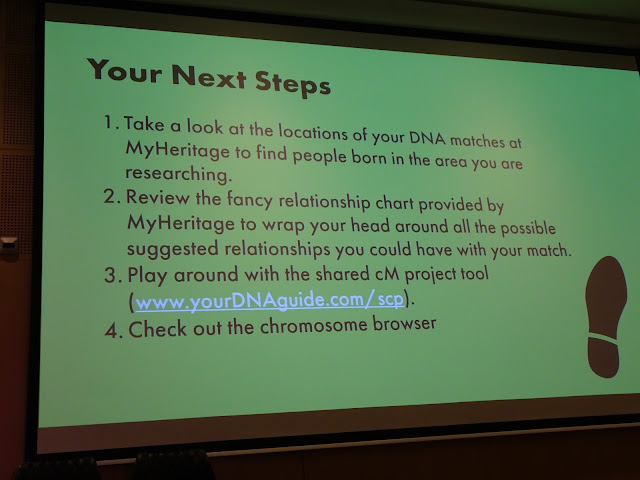 I was off learning about Geni which is a large collaborative tree while Linda sat in on Diahan's presentation and learned a bunch. Most of the time we try to attend different presentations because any that we miss will be available in video form later. 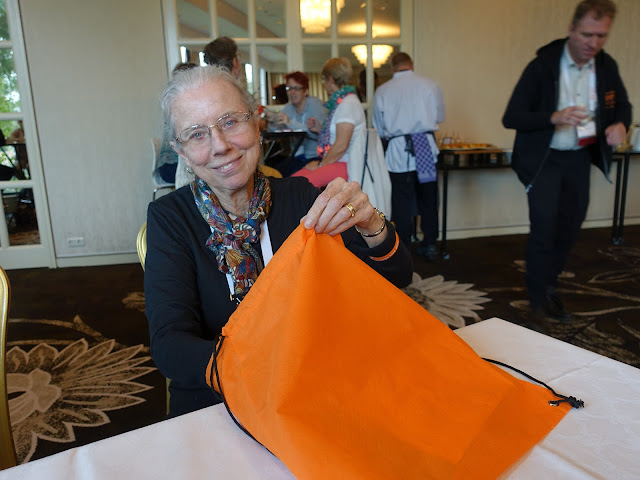 You might notice the dessert table in the background mostly hidden by the people. The big smile is because I had just accused her of hiding some desserts for later snacking in her bag. Of course it wasn't true but how do I know that might not of been what she was thinking. 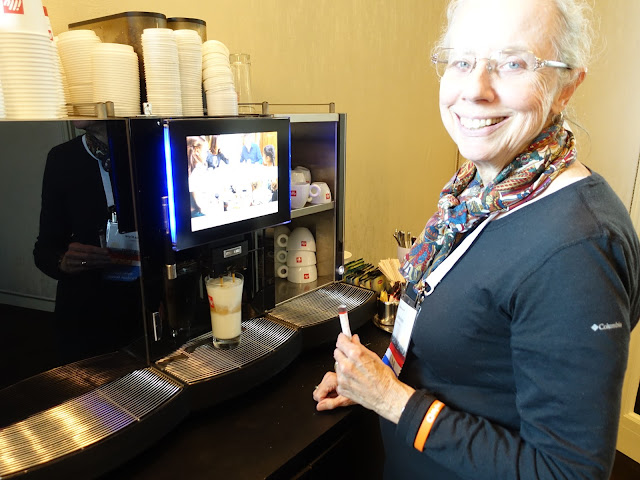 Another of those, a little post processing would do wonders, photo. I don't know what the drink was called, but I had three of them and there is coffee, chocolate, milk, and frost milk involved. Add a packet of sugar to it and you're guaranteed not to fall asleep during the sessions after lunch. Unfortunately I should've had a fourth because I did once nod off during a afternoon session. 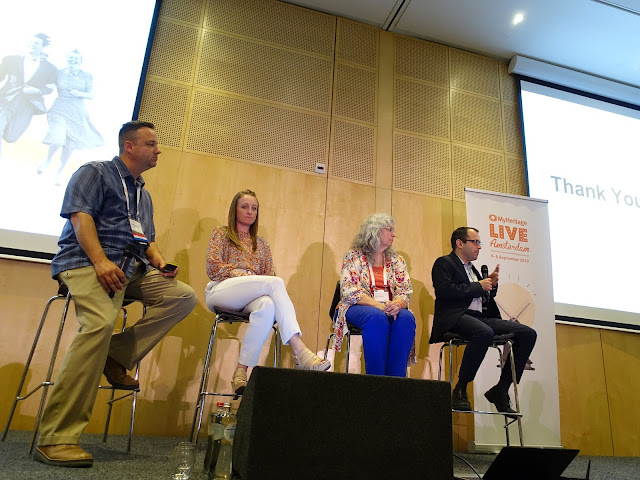 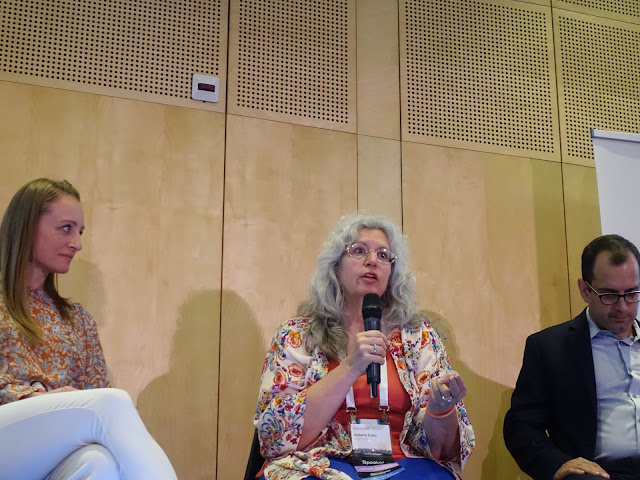 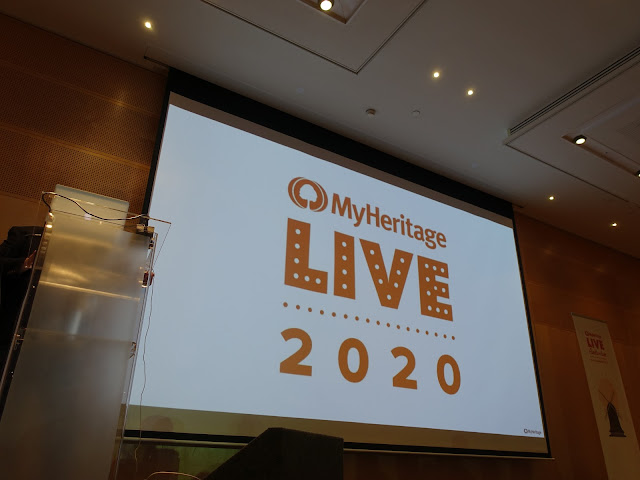 So where will the conference next year be? 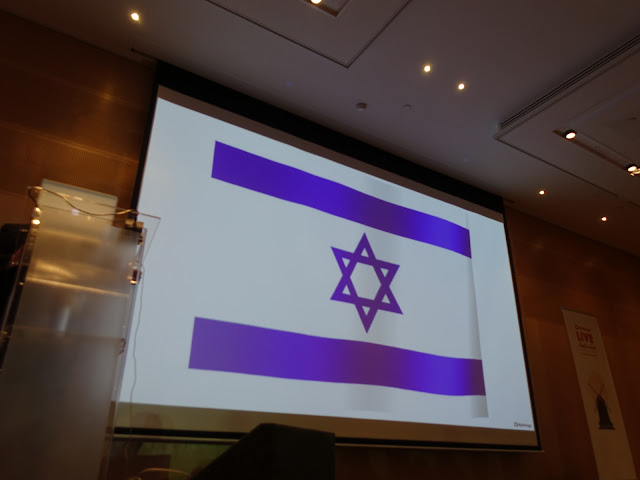 And we're not at all sure were going to attend, most likely not. Though we will try to attend a conference by some other organization in the US next year. I'll sum it up by saying we're glad we came, though it definitely could've been better and certainly didn't come up to the standard they set last year in Oslo. Still we learned a lot that will help us in the future with our genealogy. Just as a person's genealogy is never done, learning how to do genealogy better is never done. 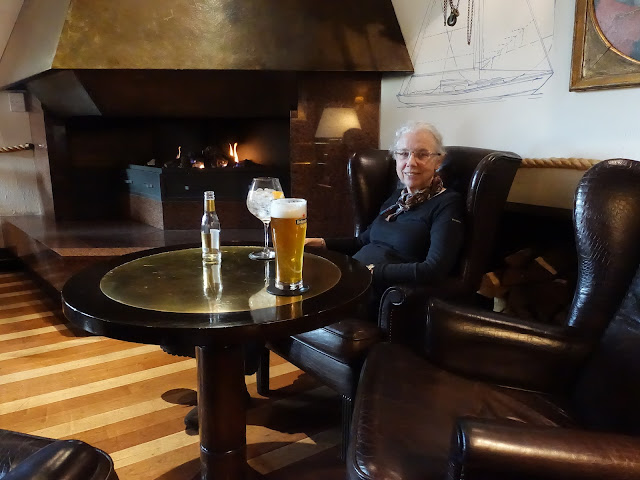 With the conference over, the lounge was not nearly as busy tonight. She who knows a good thing when she sees it, instantly made a beeline for this comfy chair by the fire. 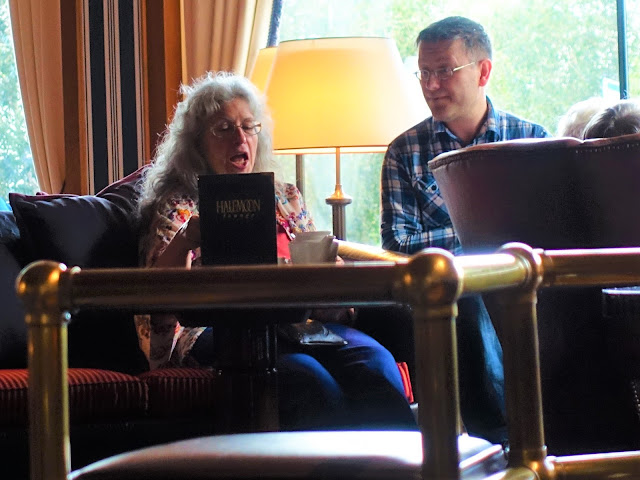 There were a few people who had been at the conference having those last-minute discussions. 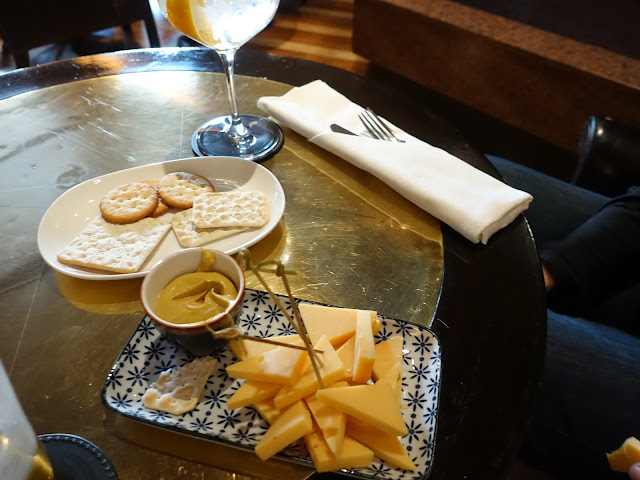 Ms. Loves Cheese knew what to order for a proper fireside snack. 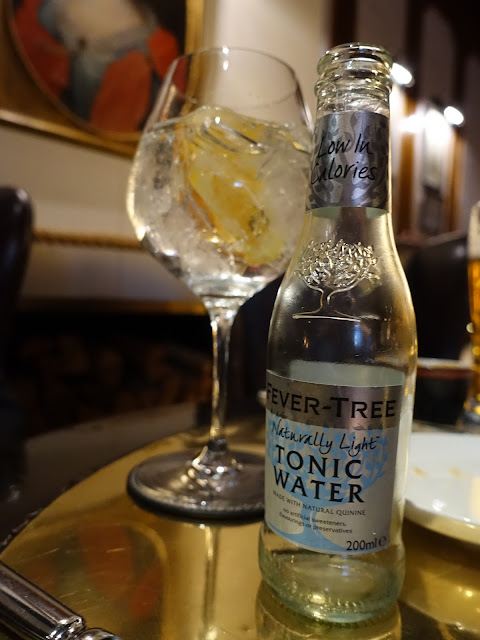 Someday I need to compose an ode to Fever Tree tonic water as a gift to Linda, since she is totally head over heels in love with it. 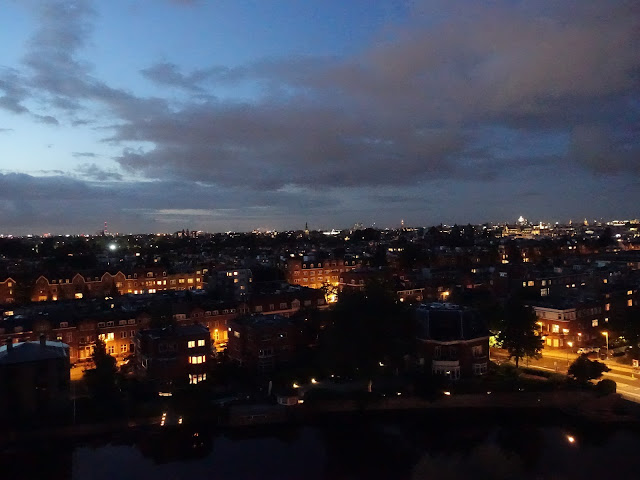 Returning to our room after an enjoyable several hours by the fire, Amsterdam at night lay before us. Tomorrow morning we leave for London and a week of theater. Amsterdam, we will miss you. London, we are happy to be coming back again.