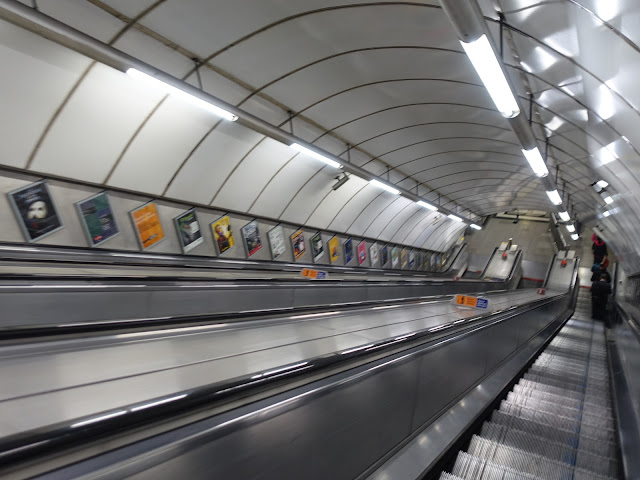 From the look of this escalator down to the Piccadilly line at Holborn station you think we were the only ones using the tube this morning. Wrong. We were on our way over to Leicester Square to buy discount theater tickets at the TKTS booth 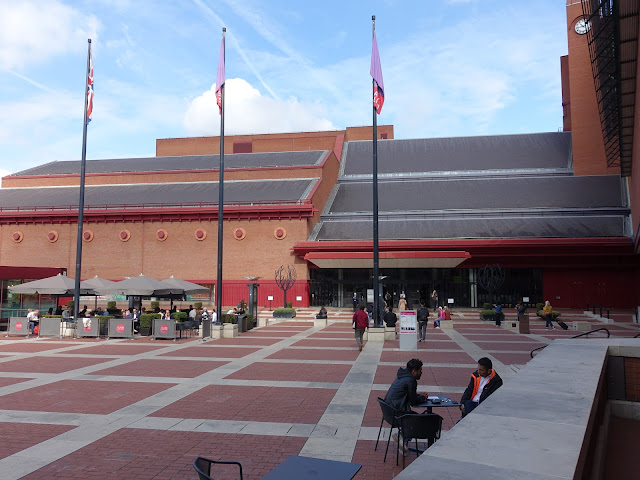 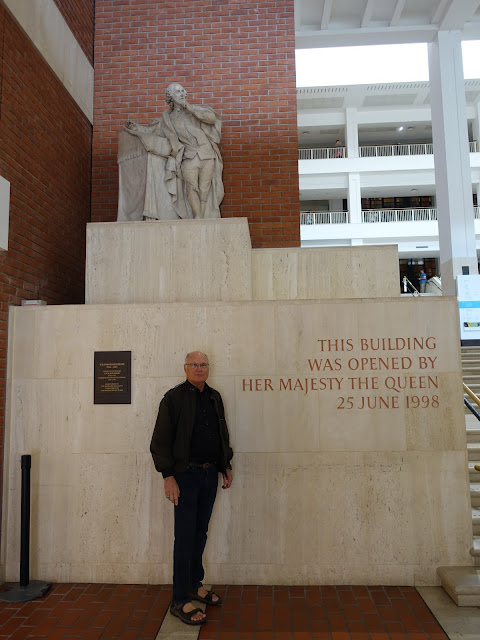 When I think about it, having Shakespeare's head chopped off at this place is almost sacrilege. 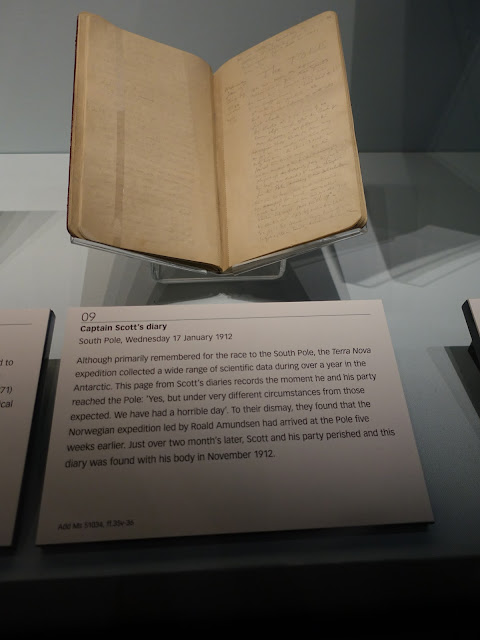 We come to the British Library for the treasure room and there was a surprise this year, instead of the sign when you enter saying no photography, there were signs on only a few of the exhibits saying no photography. To leap ahead there will be no photographs of the Beatles display, but some of the original lyrics s we'd enjoyed in the past had been replaced by different items that were okay but not as cool as seeing the original lyrics to a song written out on the back of a birthday card.

I've tried to include not only the item but also the explanation of what the item is in the following photos. 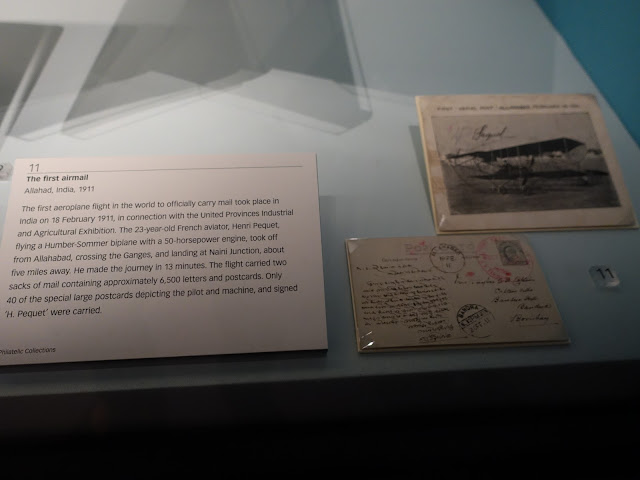 I know, it's a little hard to read, but it is one of the pieces of mail sent in the very first ever official airmail delivery. Interestingly enough, it took place in India. 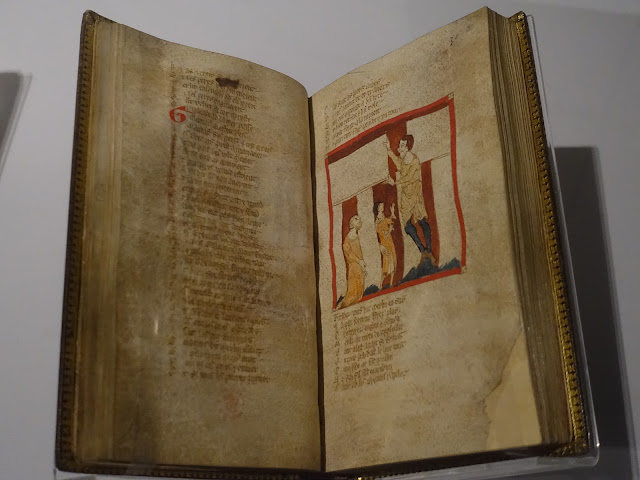 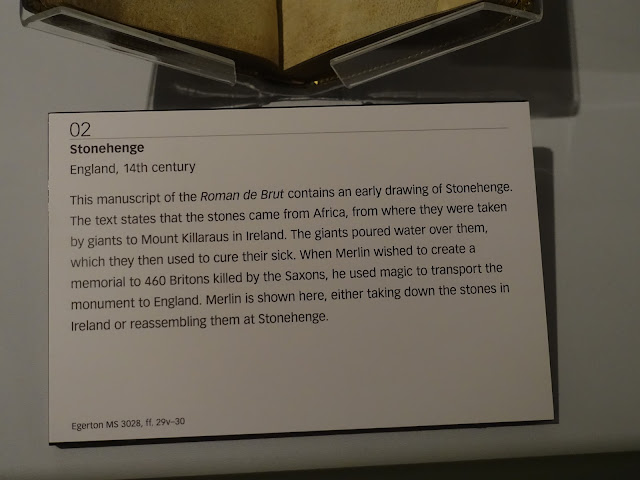 Tomorrow we are going back to Stonehenge again and we both found this story about how Stonehenge came into existence very fascinating. Think of it as a little bit like the stories that are passed down about your family, somewhere in it there is a kernel of truth, it's up to you to discover what it is. In this case it's the fact that the rocks were transported to England, however their origin was Wales. 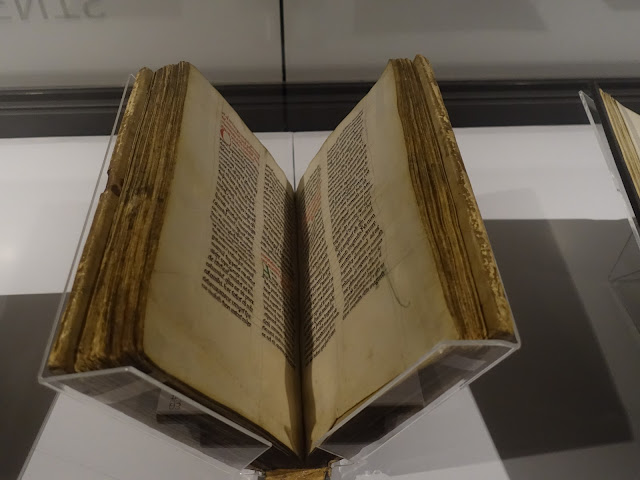 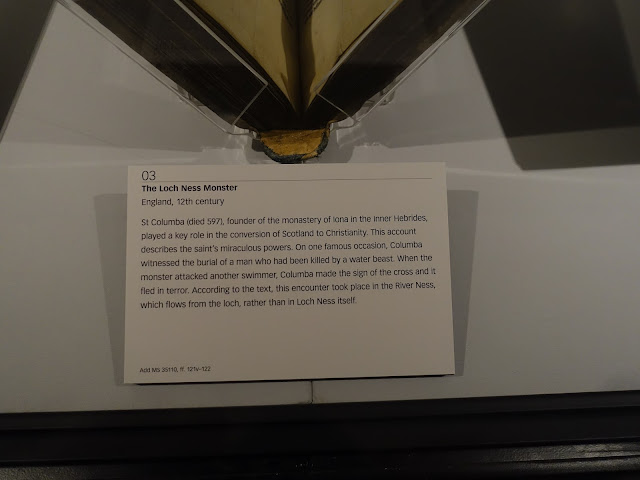 Having been to Loch Ness last month, this one caught our eye. 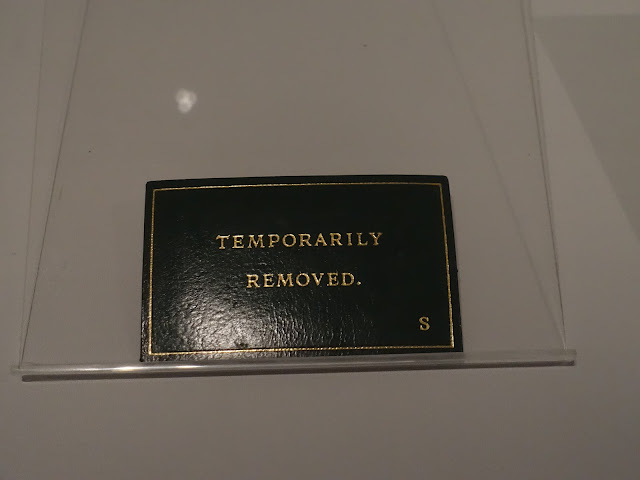 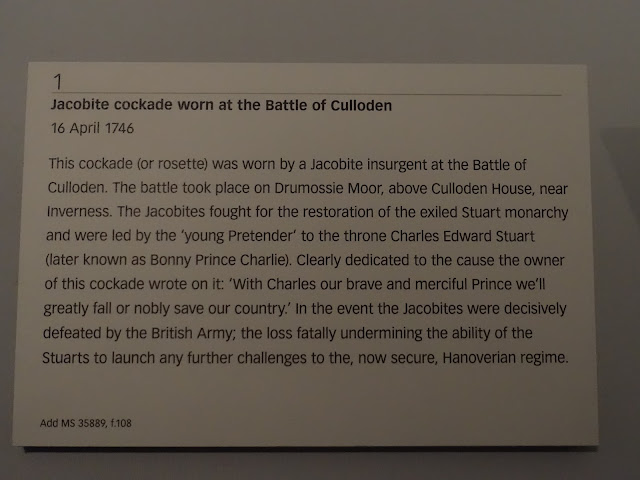 The story of my life. It's possible some of my Donaldson ancestors were at the battle of Culloden. We walked that battlefield last month and here was a chance to see something from it in the library. I wonder if my ancestors, who were also Jacobites, may have worn a rosette like this one that I didn't see. Sad Bob. 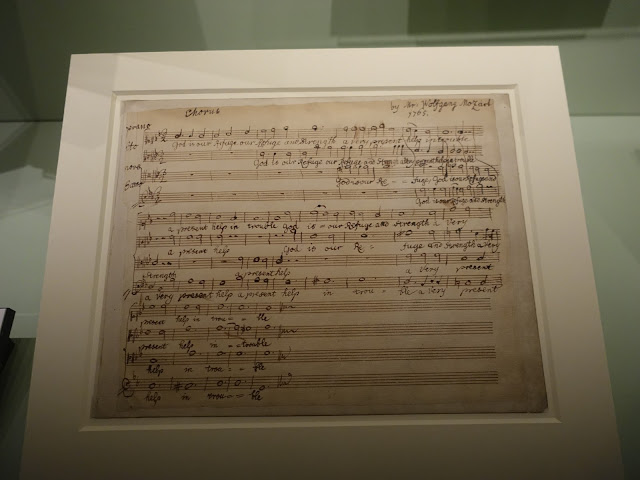 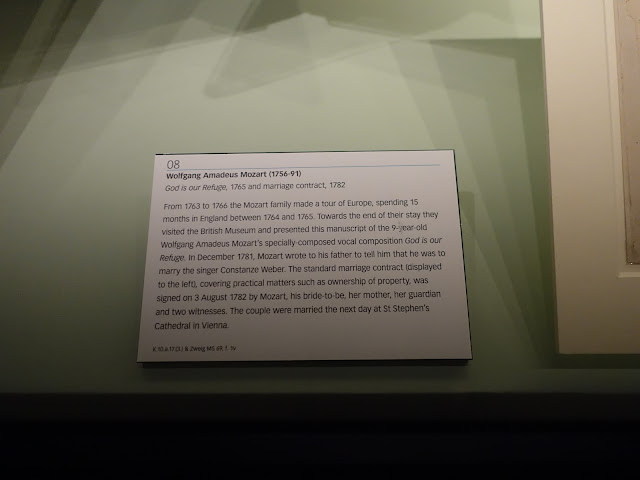 A little bit of something for any music lovers who read my scribblings. Rhythmless Bob. 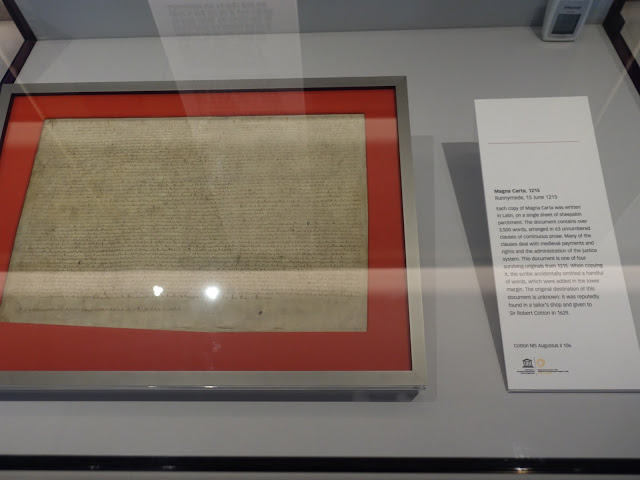 Yes it's very hard to read, actually impossible. It's very well protected. It's one of the four existent copies of the Magna Carta. It was basically a statement that the King was bound by the same laws that the people were. A short time after it was signed, the Pope revoked it saying that it did harm to the royalty. Of course since the concept was that royalty and God were intertwined, it threatened the power of the Pope. Everyone has the right to believe what they want to, even if they what want to believe come across as nonsense. Opinionated Bob. 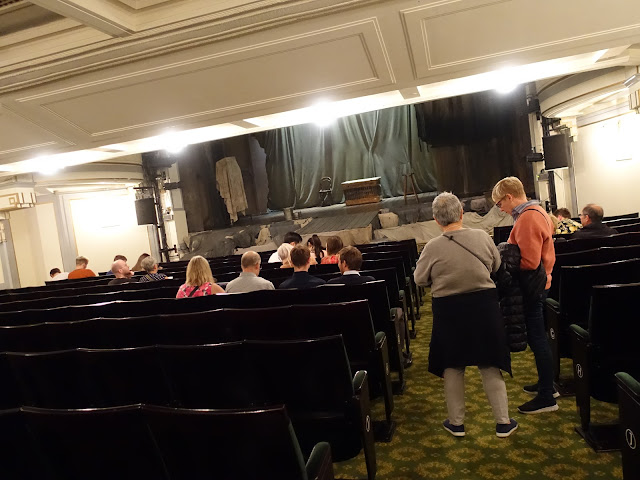 Theater time. This is the Fortune Theater, a small old theater. As we waited for the play to begin, finishing up our gin and tonic's, I counted the seats in the stalls. There were only 200 so I would imagine the theater probably held at the most 400 as there seem to be only one Circle. 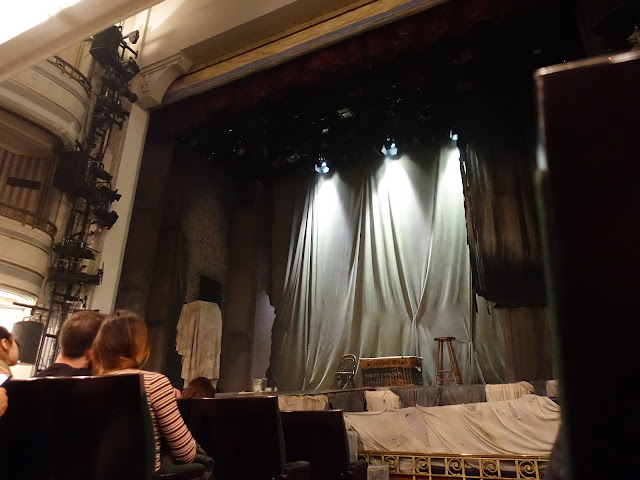 The play was The Woman In Black which had been running for some 35 years, making it the second longest running play in the West End. The set was very simplistic and there were only two actors. The playbills proclaim that it is the scariest play ever. I'm not sure about that but I do know that the woman sitting next to me jumped a number of times during it. Afterward we both agreed that it was "different." It's likely if we were coming to London to only see one or two place this would not be on the list, but since this is our theater week, it's good to expand our horizons. 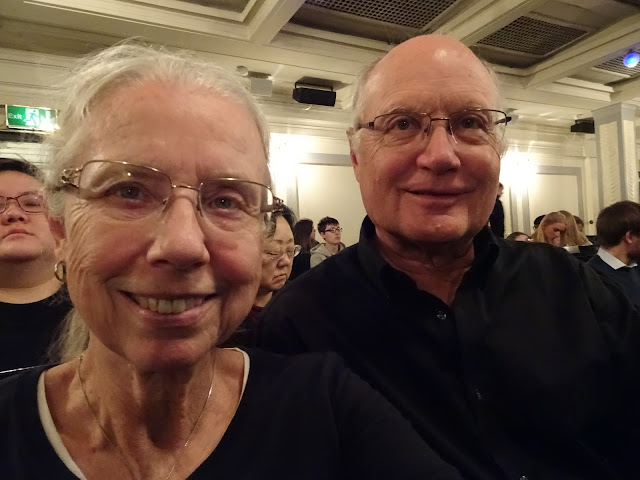 Obligatory theater selfie. The woman in the photo is the one that was jumping during the play. 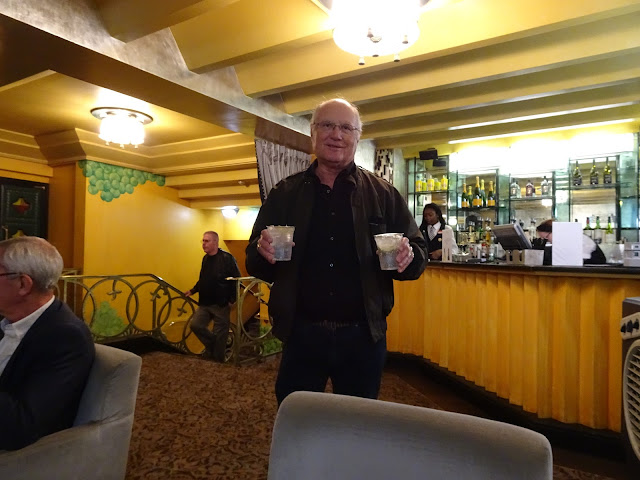 Linda's manservant doing what is required of him. Actually there's a story about the evening performance and I'm going to tell it. We got to the theater and while there weren't crowds out front one of the bars for the stalls was full and this one had two chairs available. I told Linda to go sit in the chairs and I get the gin and tonic's. Since it's the evening performance they were doubles and I made sure she got Fever Tree light and an orange. We been sitting there while and while there were people entering it didn't seem like there were as many as there should be. That's when I checked our tickets and found out that we had arrived at 6:30 thinking the play started at seven when it actually started at 7:30. We ended up getting a good laugh out of that but realized if we had arrived at our usual time of a half hour before the curtain rises we would never have gotten seats in the bar. Sometimes it's better to be lucky than to know what you're doing. Lucky Bob and Linda. 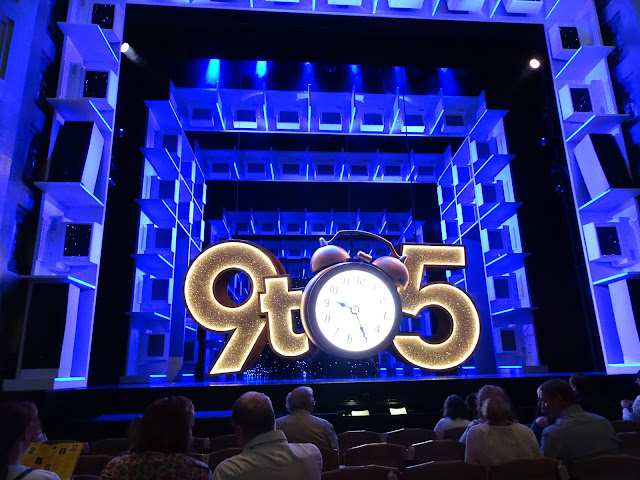 This was the evenings play. I'd rate it merely okay. We knew Dolly Parton was a did it yet all the promotional literature features her name. To begin the play there was a video playing in the clock face of her cracking some jokes that weren't terribly funny. The songs weren't the greatest and the choreography seem to leave a lot to be desired. One of the telling things was that when the play was over there was applause but it certainly wasn't sustained like it is invented the other performances we go to. Then again we only paid half price for these excellent seats so will just chalk it up to experience. Theater Critic Bob
Posted by Bob and Linda at 2:49 AM