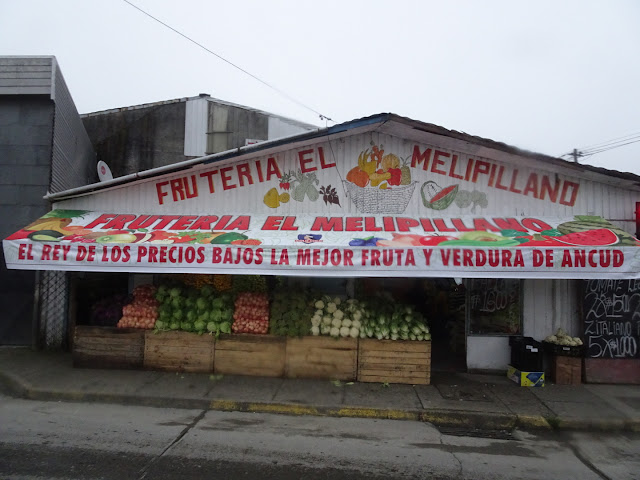 Most of the shops we see are very small, many only six or eight feet wide and from 5 to 15 feet deep. This is a larger one. In the bigger towns and cities the shops come in all sizes. Walmart has a few "hyper" stores in the very largest cities, they are called Lidel, I think, and Linda says that is what they are, so it must be true. Yes Dear Bob. 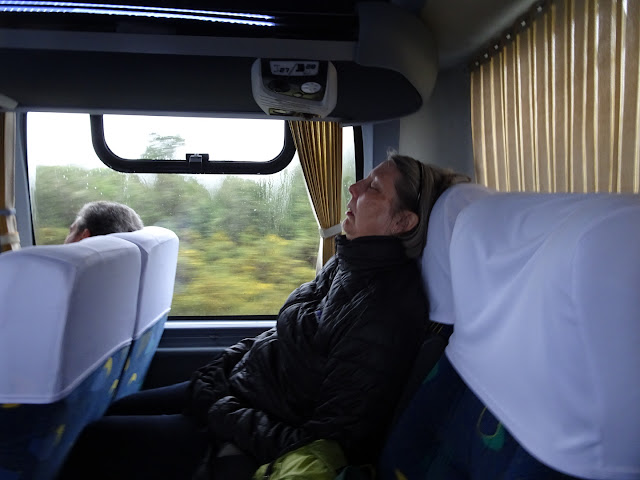 It was a very quiet bus ride this morning, with many in our group doing their best Linda imitation. The nice thing about sitting in the back seat is that Judy and I have no completion for our seats. Judy asked me if her snoring bothered me. I politely said I hadn't even noticed, and I hadn't. Heck, compared to Linda a chain saw is quiet. Bad Bob. 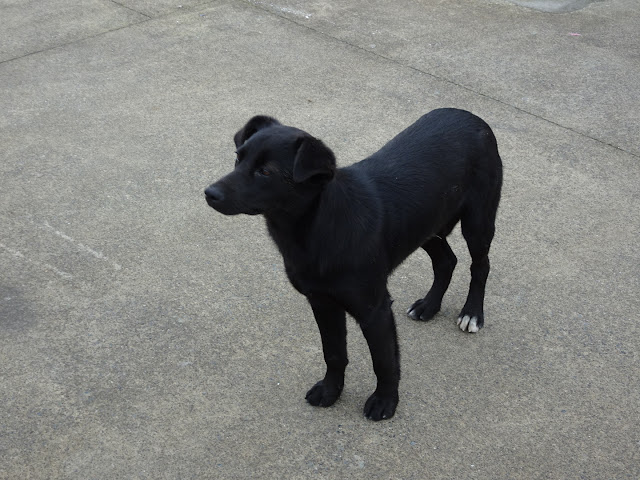 As I've mentioned before, the dogs here often run free, yet they are never aggressive, even with each other. It is not unusual for tour members to carry small treats in their pockets to give to these polite panhandlers. And when they get a treat they don't bug you for more, nor do other dogs come running to get some themselves. No purebreds, virtually no small dogs, just good sized heinz 57 dogs. And the Chilean people are just as friendly as are the dogs. 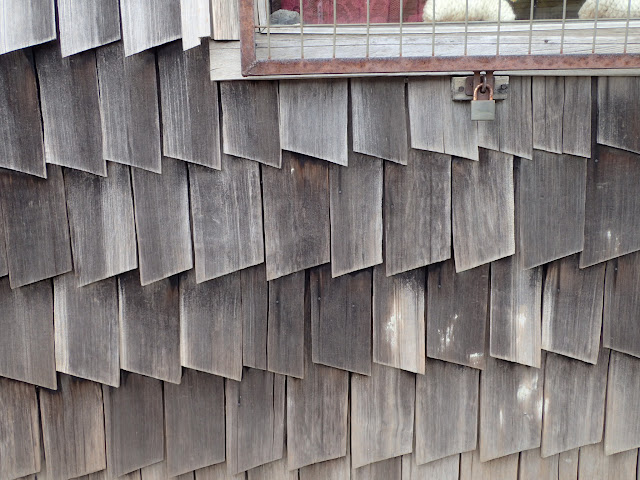 We visited several small towns and Linda found a new hobby. Photographing all the different shapes and colors of shingles that cover the sides of the buildings. This is a land were wooden buildings house both prince and pauper. From large church to small house, it is shingles. Linda plans to put a collage of them together when return home. The one I picked above was unpainted, but believe me the come in almost every color imaginable. 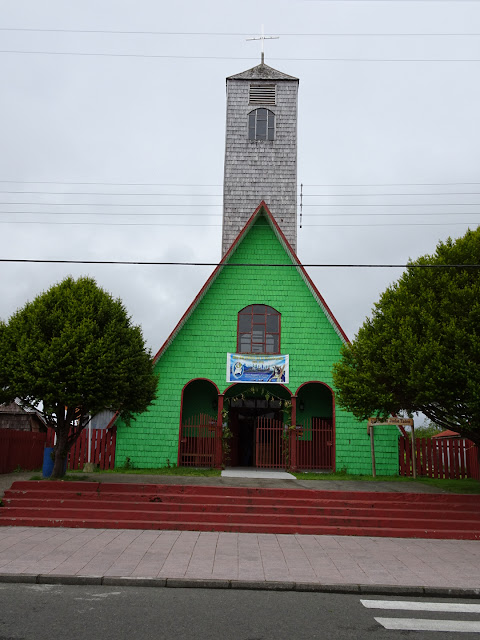 And it is just not houses that display this plethora of color, even the shingles on the church make a striking statement. 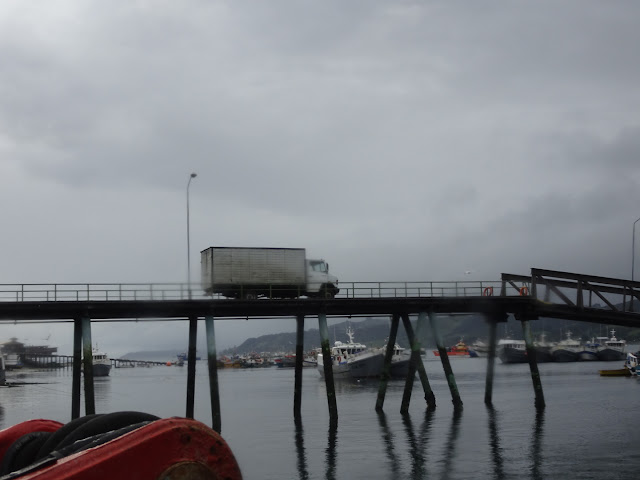 It's not really a bridge to nowhere. As the bus waited to drive aboard a ferry, trucks were using this elevated one lane bridge to drive out to a large loading dock where their cargo was loaded aboard small boats to be taken to the many nearby and faraway islands. 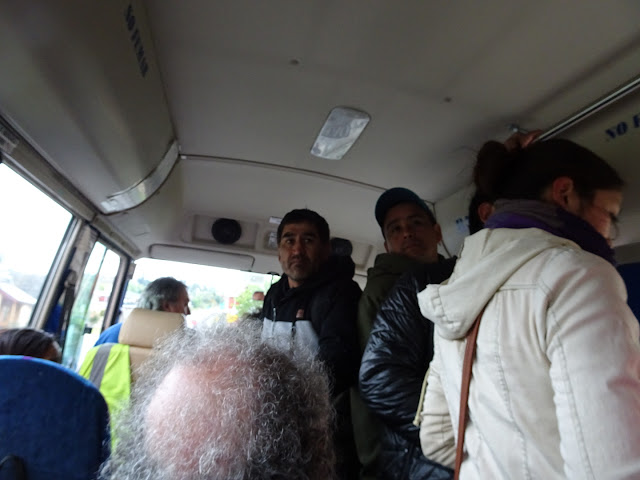 As part of our local experience, we used a city bus to get around. There are not many large buses here in Patigonia, most having 22 seats. That doesn't mean there won't be 35 or more passengers on board as was the case with us. Efficient, inexpensive and frequent bus service all over the country seems to be an inalienable right of the Chilean people. At least that's my observation. 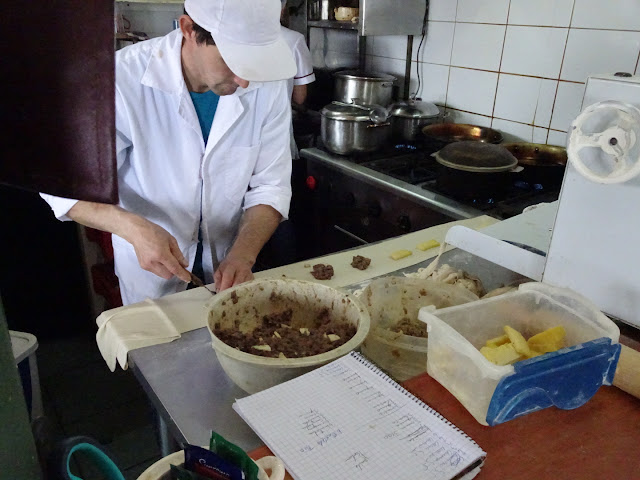 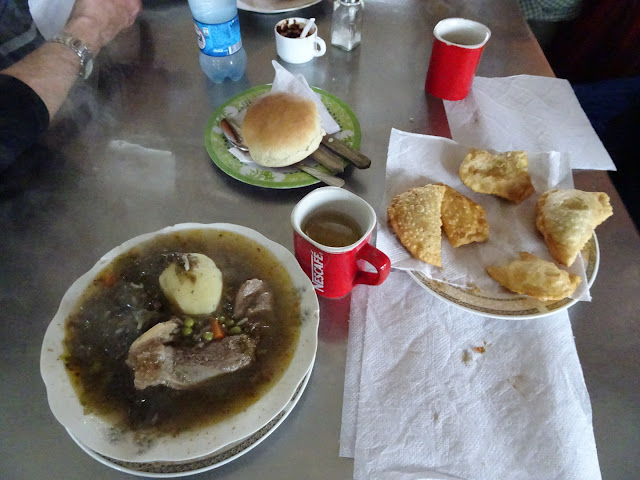 We ate lunch at a small indoor stand that served freshly made food. Two cheese, two beef and two seafood empenadas plus a bowl of lamb and seaweed stew. We also ordered two cups of tea. They arent permitted to serve alcoholic drinks here, but if you order tea guess what you get. First time we ever drank wine out of Nescafe mugs. You can probably guess what foods Linda ordered and which I ordered. We split the empenadas, each getting one of each kind, but the stew was supposed to be mine. My wife actually ended up not only eating half of the stew, but used the bread we were also served to sop up the bits in the bottom of the bowl. Travel has taught her not to reject a food because of what it sounds like, by trying it she almost always discovers something very delicious. Granted the same thing made in the States would probably taste like garbage due the mutton instead of the spring g lamb, gotta make it cheaper, or fishy tasting seaweed, the real stuff is to expensive you know and Americans wouldn't know the difference away. Those of you who travel overseas likely know exactly what I am talking about. Soapbox Bob. 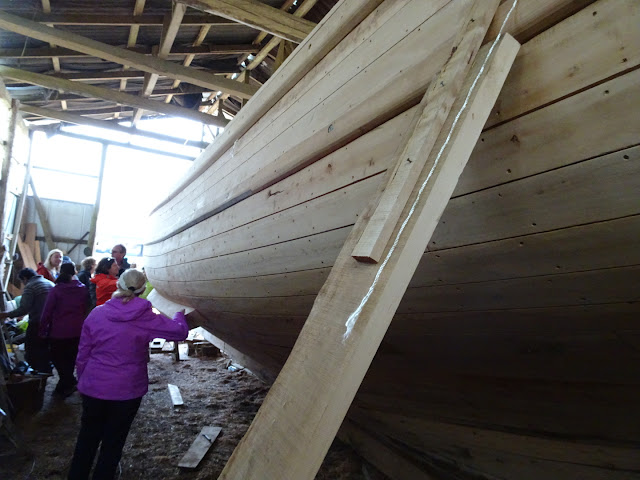 Another interesting stop. A father and son who build commercial wooden boats the way they have been built for centuries. A dying art we were lucky to see first hand. 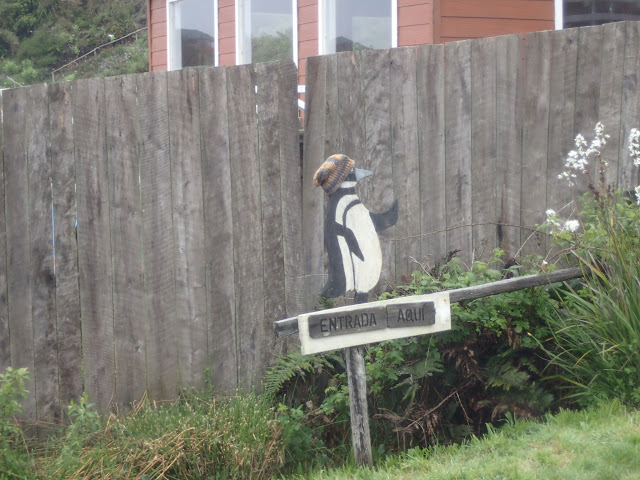 We ended another long day with a long drive to see penguins. We were to take a boat out to an island where the penguins roost for the night. Everything in Patagonia is controlled by the weather, and our penguin viewing was no exception. Because of the high winds the Chilean Navy, who controls the waters of Chile, shut down the ports along the coast. Linda did her best to get a photo of one of those flightless avians. 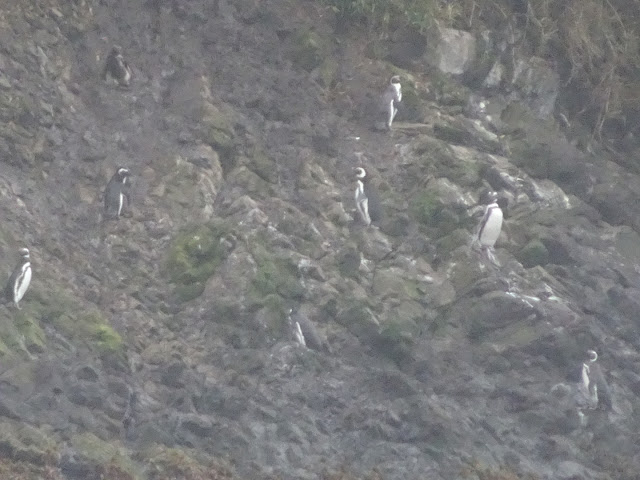 By walking up the beach we were able to barely see them out on an island. My camera barely picked them up. Linda had hoped to get much closer to them like we did in Australia, but it wasn't to be. I was glad. Why you say? Because now there is an even better reason for us to travel to Antarctica. To see the penguins!! Yea!! Optimistic Bob.
Posted by Bob and Linda at 3:58 AM