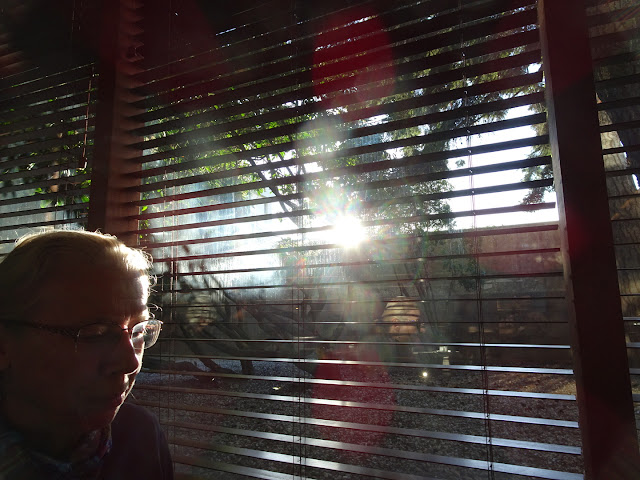 Annie joked that this morning would be a once in a lifetime experience for us. There was a sunrise that we actually saw. Unfortunately Linda and I missed it, we were on the opposite side of the hotel and even so, it was long over before we were up at six oclock. This was the first night of the trip we both slept straight through until the alarm went off. Darn! A double darn was there wasn't any salmon at breakfast. Poor Bob. 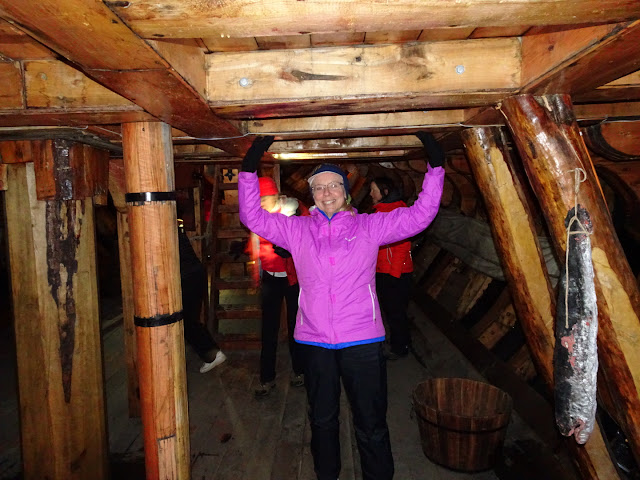 Our first stop of the day was at a replica of the only one of the 5 ships in the Magellan expedition to complete the circumnavigation of the globe. It was still sunny as we got off the bus. Luckily for me, I opted to wear a full compliment of foul weather gear and moments later the wind was blowing and it was raining and sleeting. Such is the way the weather changes in Patagonia. As you might guess, Linda had fun playing sailorgirl. 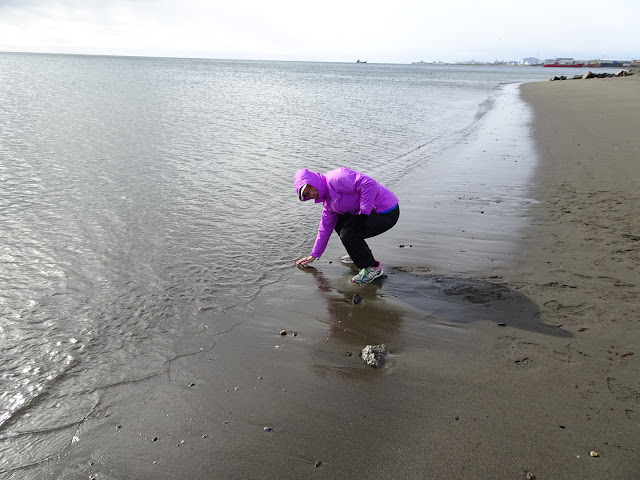 The ship is located beside the Straits of Magellan. Annie said it was our chance to put a foot into the waters of that famous bit of water we all learned about in school. You can see that Linda wasn't quite as adventurous as she could have been. But then no one else in the group stuck there "foot" into the straits of Magellan either. 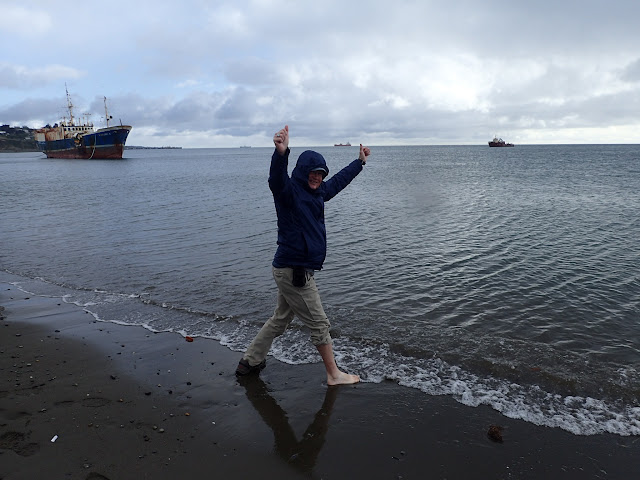 Okay, so there was one exception to no one sticking their foot in the straits of Magellan. As you can see the family female photographer missed the moment that my foot was in the water, meaning it was going to have to be recreated several times to get the shot correct. Yes the water was very, very cold. But I did it. Cold Foot Bob. Or as some might say, Cold Fool Bob. 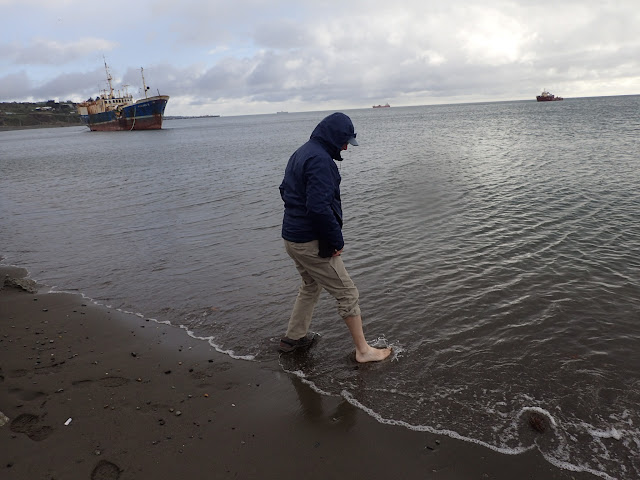 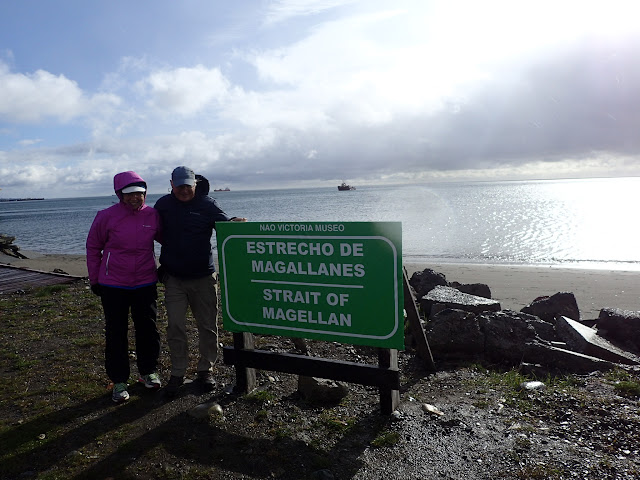 Obligatory photo to prove that we really were at the straits of Magellan. 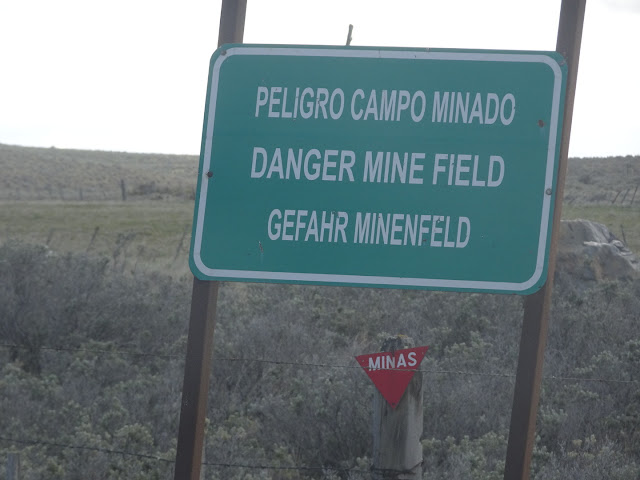 Obligatory photo to show that going on an OAT tour is not for the faint of heart. 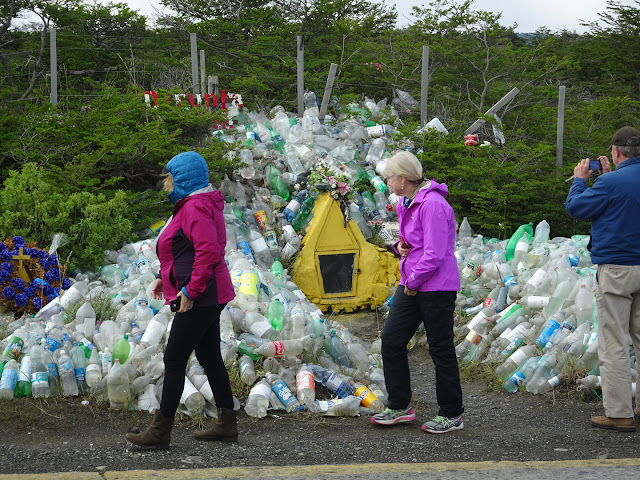 A roadside shrine in the middle of nowhere. A young woman traveling with a baby died of thirst out here many many years ago. When she was found, underneath her was her baby who was still suckling at her breast even though the mother was long dead, hence the miracle that led to the mother's sainthood. Travelers place plastic water bottles around the shrine with no cap on to catch water when rain falls in order to provide water for the saint. Just another reason why we travel. 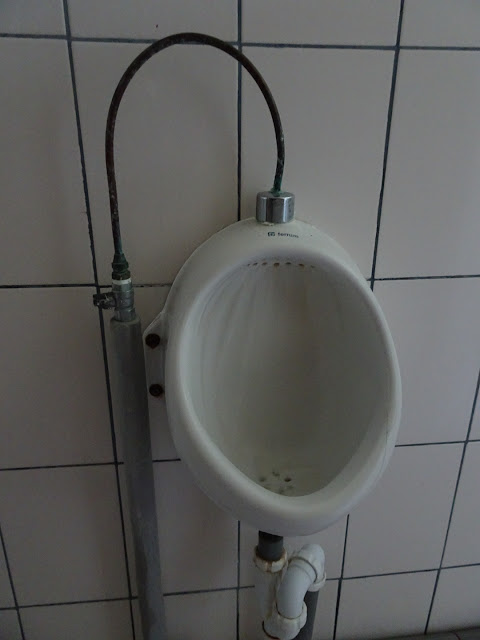 I have really been slow on the uptake this trip. Here we are, over two weeks into it, and this is my first image of these unique restroom features. The thing I liked about this one is the valve on the copper tube you could use to flush it. The other thing is if they would install these in the women's restrooms it would appreciably shorten the lines to use their restrooms. 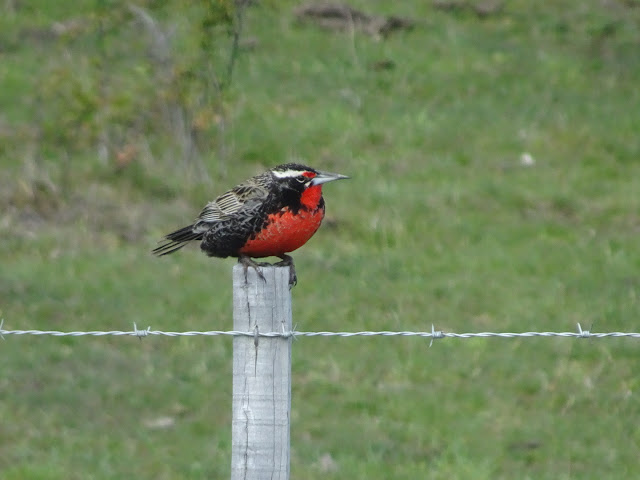 We were told what this bird was, it's definitelt a very pretty one, but neither of us can remember it's name. And we never saw another one the entire day. 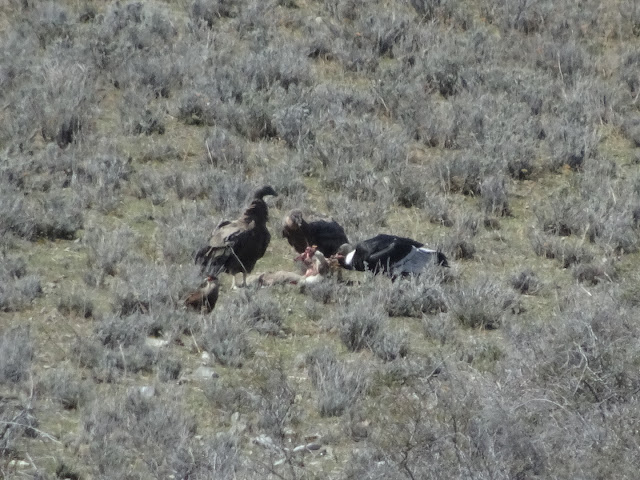 Condors enjoying a meal of spring lamb. It was a pretty awesome sight if you weren't the lamb or its mother. 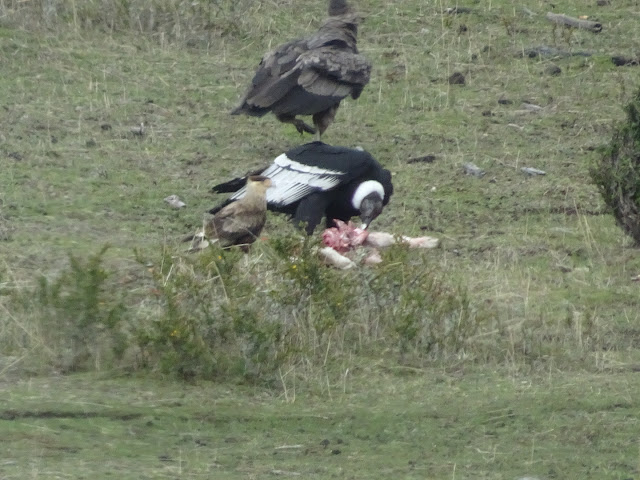 Further down the road another condor feast of spring lamb. All I can say is that a condor is one very big bird. They were one of the things we hoped to see in Patagonia and we are getting an eye full of them both overhead and on the ground near the road. It probably has as much to do with the fact that it is lambing time and the lambs are susceptible to the cold weather occurring now. Mother Nature has her way of balancing things out. We were lucky enough to be here at the right time. 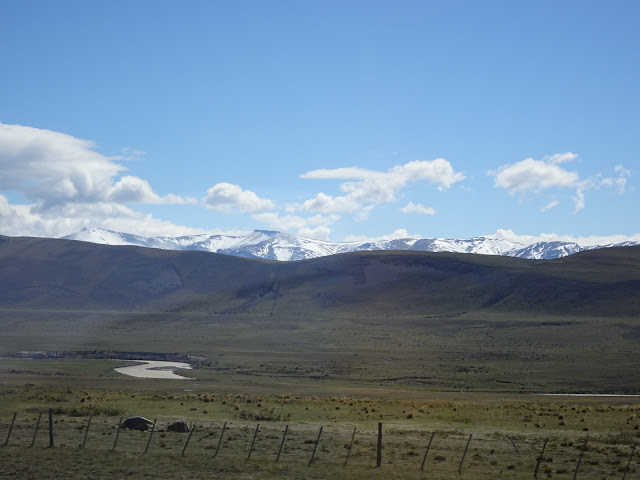 Time for some photos of beautiful scenery which is everywhere. Patagonia is everything we hoped for and much much more. Our route into the park had to be changed because the winds are so high today that higher profile vehicles like the bus cannot negotiate several of the roads. Also there are several sections where the wind will be picking up rocks and there is an excellent chance that some of the windows in the bus would be broken if we drove that way. As Annie explained to us, when we are in this area of Patagonia the bus driver is the one who dictates whether we go somewhere or not. We thought we knew what winds were but we're finding out we really had no concept of what high wind is. I remember us thinking, why we have wind at Retama all the time so we will know about it. When you literally get blown 3 steps by the wind just getting off the bus it sure isn't like that little tiny gentle breeze that blows at Retama. 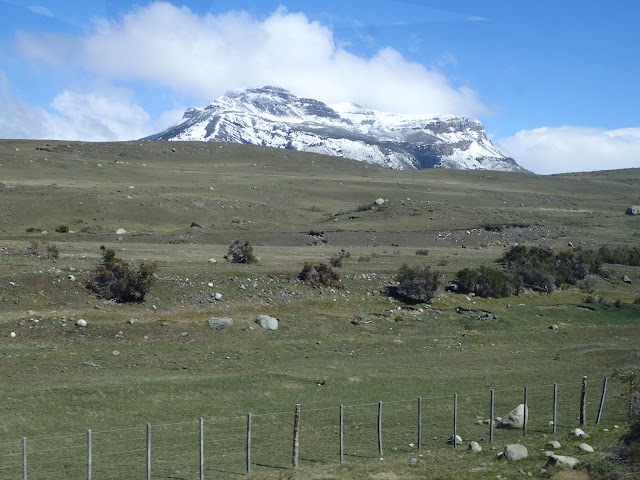 Every turn in the road brings a new view. 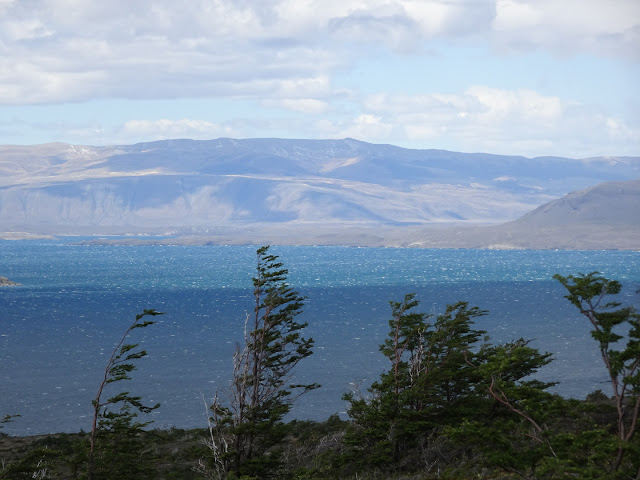 We are in Torres del Paine National Park. 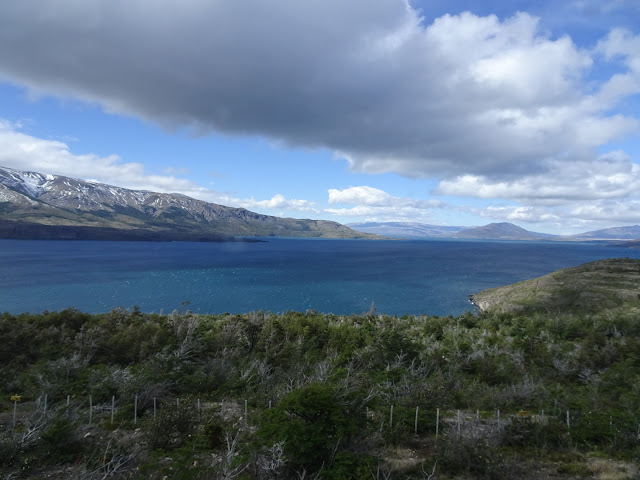 I just wanted to give everyone an idea of the scenery here. The told us were are extremely lucky to have such good weather. Lucky is as lucky does. 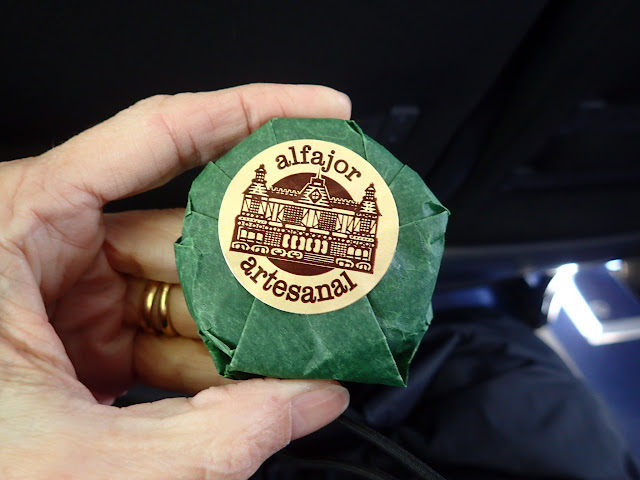 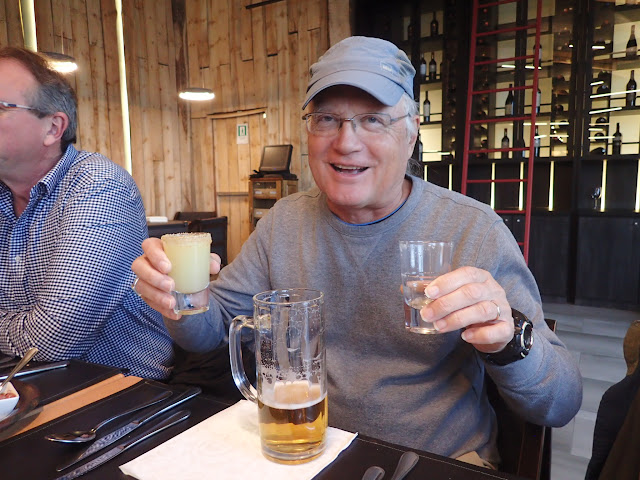 Woman may live on chocolate alone, but man needs more.