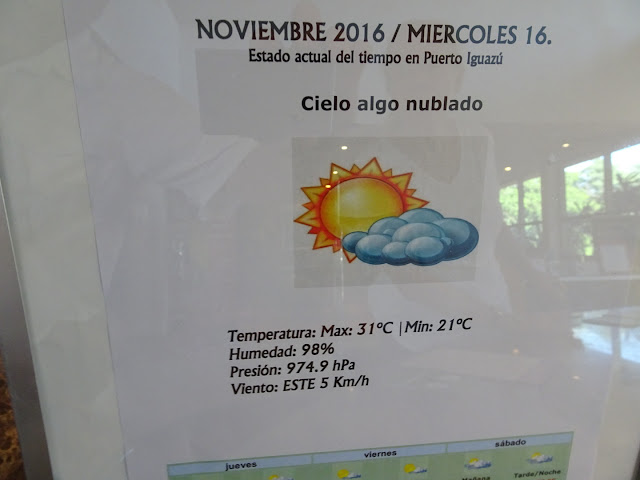 The weather forecast for Iguazu Falls today, I expect it isn't all that different from Retama. This is a travel day, or maybe I should say, 28 hours of travel , since we leave our hotel this morning a 10 am and don't arrive home until 11 am tomorrow morning since Argentina is 3 hours ahead of Texas. It is going to be a long trip. Half of that will be in the air, the rest is getting to and from airports or waiting for flights. Absolutely no problem with any of the viruses that have been in the news. Any signs we saw seemed to indicate there was no danger from them in that location, but since my knowledge of Spanish is limited mainly to one syllable words, I could be mistaken in my interpretation. No Hablo Espanol Bob. 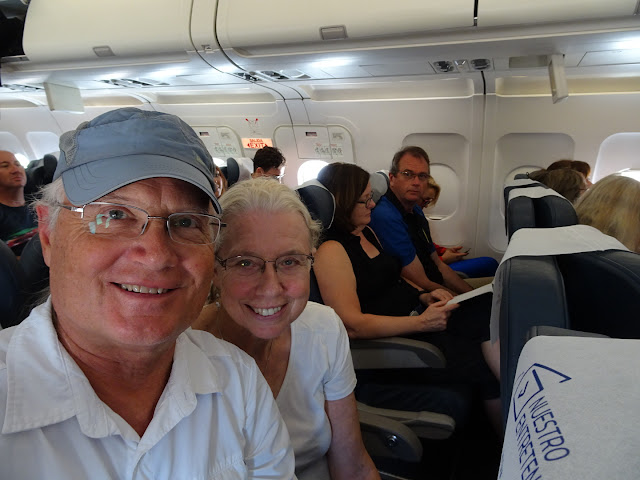 I suspect all y'all are hoping this is the last selfie I'll be posting, and unless I forget and post another one, it is. And to go out with a bang, it is a double selfie with Denise and Ron, who were on the trip in the background. They were Canadians, but were traveling incognito, having removed the dozens of Canadian flag emblems that would have normally adorned every piece of gear and article of clothing they had. They must have also taken US English language lessons prior to the tour because I don't recall hearing a single "eh" from them the entire trip. Two nicer people you will never meet. 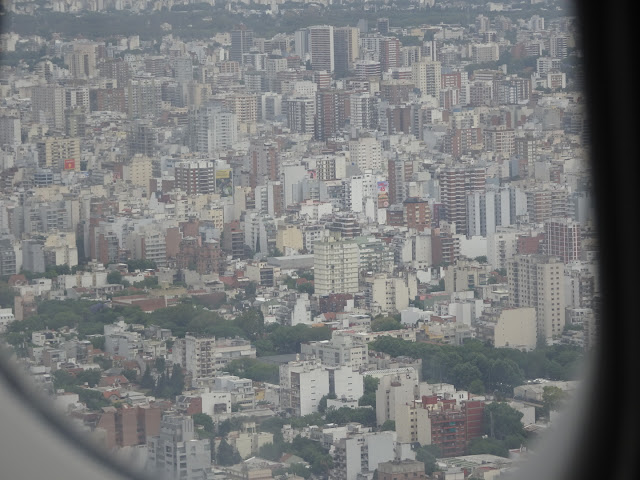 Buenos Aires from the air. 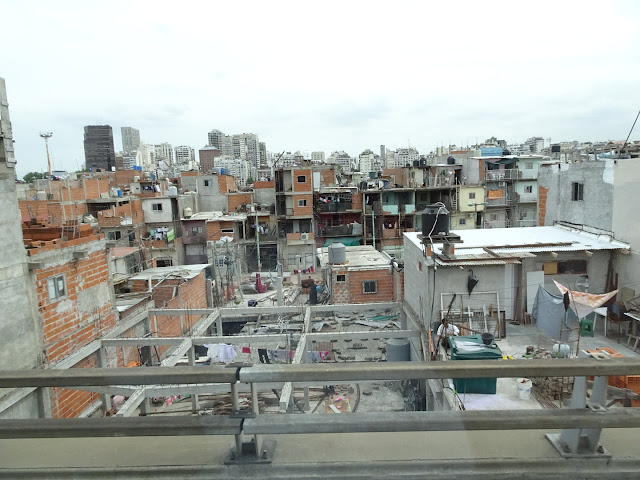 A Buenos Aires slum. We arrived at one airport and are leaving from another on the opposite side of town. Because of the length of time between flights and the fact some of the people were staying over in Buenos Aires, we stopped at the hotel we had stayed at during our two previous times in BA. We would only be there for an hour and a half before heading to the international airport, but the wifi at hotel was great, and I was able to upload the blog posts for the previous four days. As for Linda, she enjoyed two chicken empenadas while I was engaged in blogging. Woe to the poor blogger who toils away informing and entertaining with tales of travel to foreign climes while his lovely companion enjoys the pleasures of self same distant land. Maybe I should call that "Ode to an Argentine Urge". Poet Bob. Evita Peron may be long gone, but Peronists keep her memory alive. As Annie said, people either think she was a great person, or they think the opposite. As more and more facts are uncovered about her the pendulum swings back and forth. So it is with leaders everywhere. Wonder if anything can trump how the US pendulum is swinging now? Punster Bob. 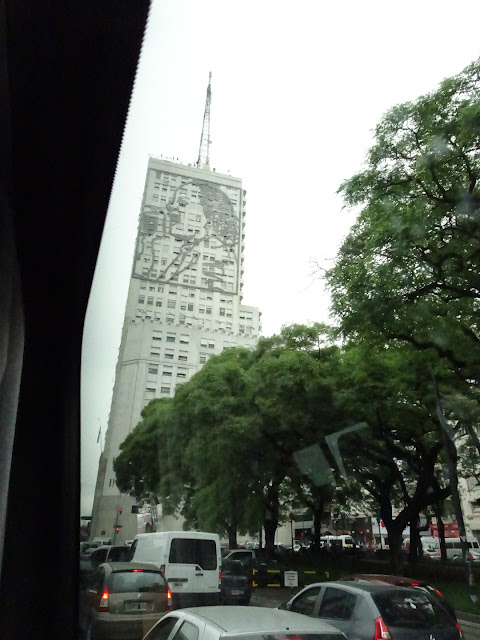 So, what is a Pringle can photo doing on the blog? It's Linda's fault. Actually it was a very good fault. She put some toilet paper in the bottom and some toilet paper in the top. No, it is not a pee can for emergencies on the plane. Disclaimer entered because with her Appalachian hill girl background. It was to protect my hearing aids when I sleep during the overnight flight. And she got to eat the pringles! Super Smart Linda. 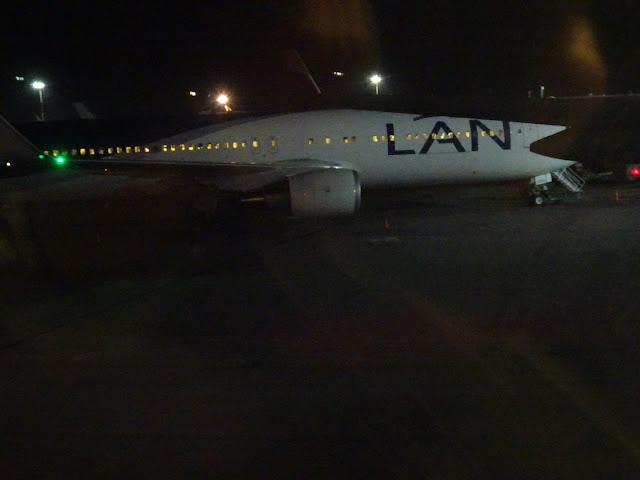 No more flights on LAN/LATAM. This was the view out my window as we waited for takeoff. Yes, you heard that right. After having a center seat with Linda in the aisle and someone always in the seat on the other side of me on the previous 9 flights, I finally got a break. This flight, on a 777, was only two thirds full. We were in row 44, the next to last row. Just before takeoff a flight attendent asked if we wanted to move to the two seats in row 43 on the left side. Quick as a mongoose I was over a bewildered Linda and in that window seat. Once recovered, she moved the aisle seat beside me. I have to believe this was just another of those special things that happened to us this trip because of Annie's good karma. Very Happy Bob. 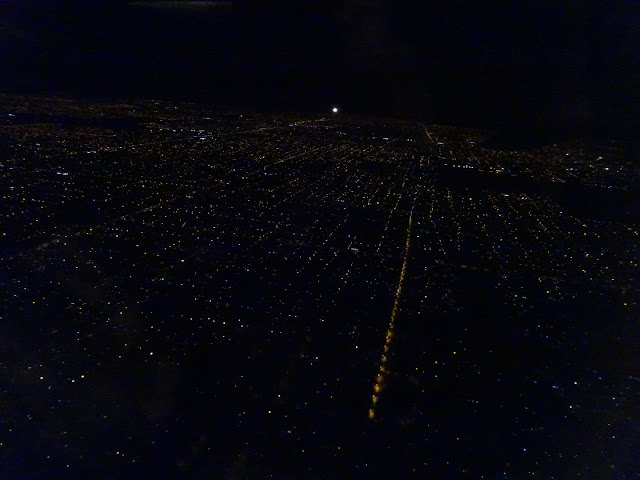 Buenos Aires from the air, we are on our way home. What grand time we had, and we are already planning our next trip, just waiting to get back to Texas to commit to it. One of the first orders of business is going to be learning how to make empenadas that taste like the ones we have been experiencing. Soon we will be exiting the plane and looking for Dianne and Roger's big smiles. Travelling is fun, but so is being home with friends. Life is good indeed.
Posted by Bob and Linda at 7:39 AM

Email ThisBlogThis!Share to TwitterShare to FacebookShare to Pinterest
Labels: Argentina