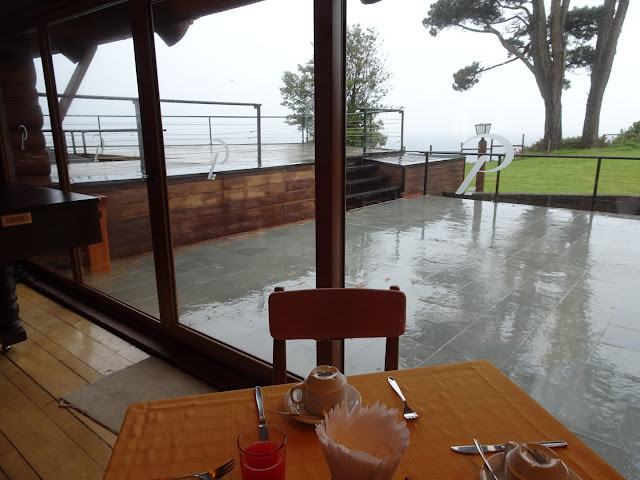 It was another typical day in this part of Patigonia, rainy. Actually it stopped raining about mid morning, making it a non-typical day. We could have come in January or February, the middle of the summer and had warm sunny days interspersed with rain, but that wouldn't be the real Patagonia. Just the real thing for us. 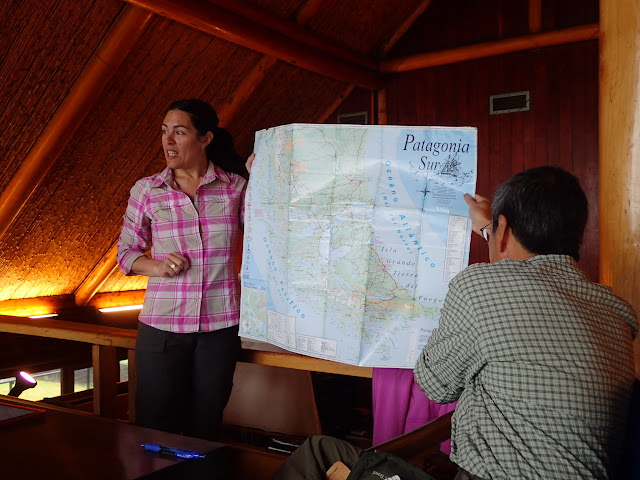 Annie conducting the morning briefing. We learned that today we are heading much further south. Tomorrow the weather of the last few days will seem down right balmy. Temperatures hovering around freezing, with either rain, sleet or snow. Winds between 28 and 35 mph, gusting to a point that they carry small rocks and pebbles, making the wind chill down in the teens. And just when you think it can't get worse, the forcast for the next day is even higher winds. Maybe visiting the real Patigonia wasn't such a good idea after all. 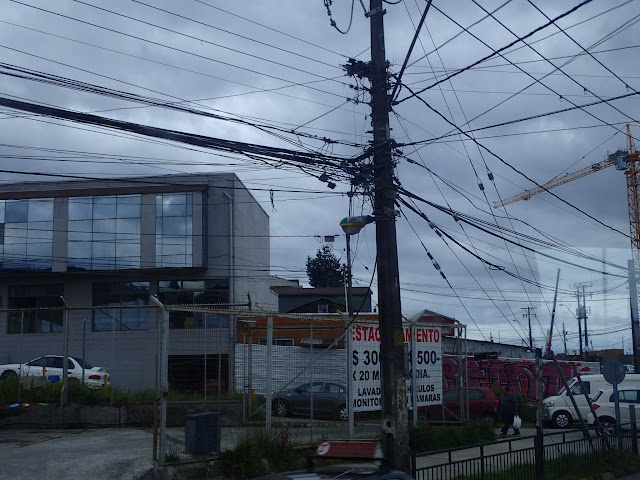 I'm not sure where Linda took this photo but it would appear this town may be where they train the Easter Island telephone linemen. 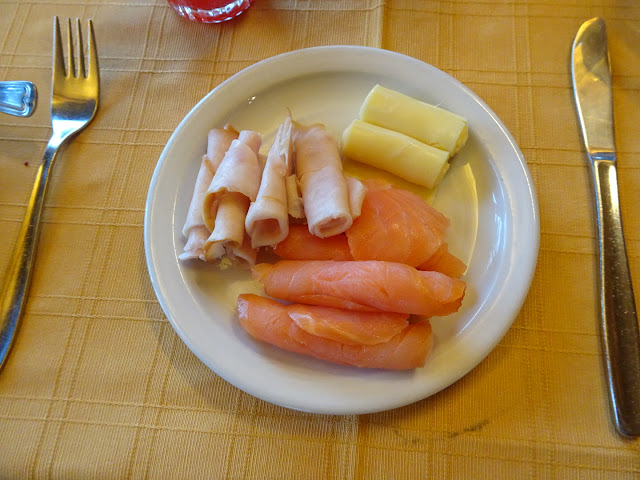 Since I have been in a self imposed ban over posting of breakfast food photos, I have been getting the jitters whenever I take one knowing it won't be posted. Time for that to end right now. My breakfast this morning. What doesn't show is that I went back two more times for salmon. Happy Bob. 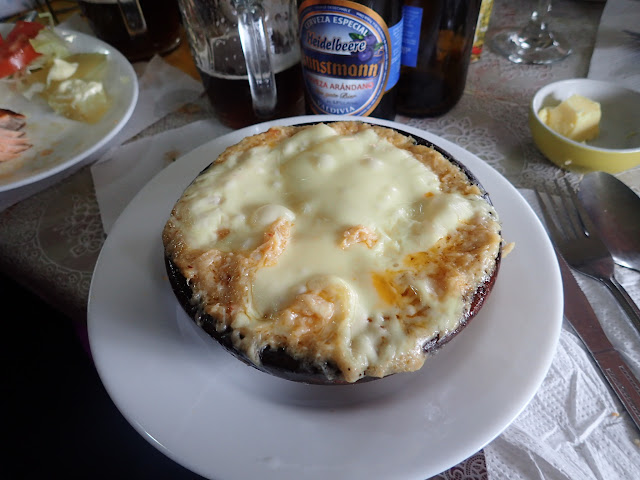 Continuing the food theme, here is the so called crab stew I had for lunch. Bob, can you say, "The best crab imperial you've ever had?" I sure can! It was beyond outstanding, and in another hole in the wall place to boot. Just when you don't think it can get any better it does. Stuffed but Happy Bob. 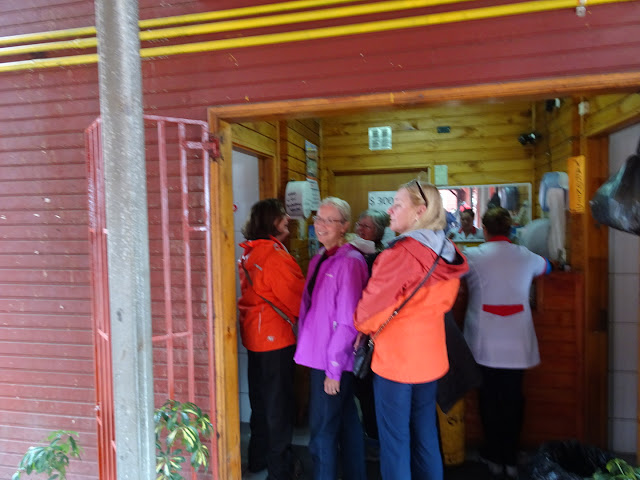 Something the girls did after lunch. They lined up to pay 300 pesos to use the bano. Meanwhile the guys were in and out with no wait. I have my theory as to why they take so long, but if I mentioned it I'd likely be in very big trouble. Quiet Bob. 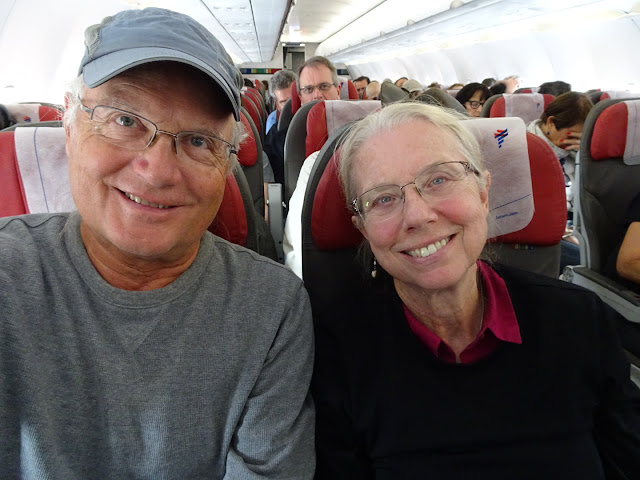 The "Our flight to Pont Arenas selfie." 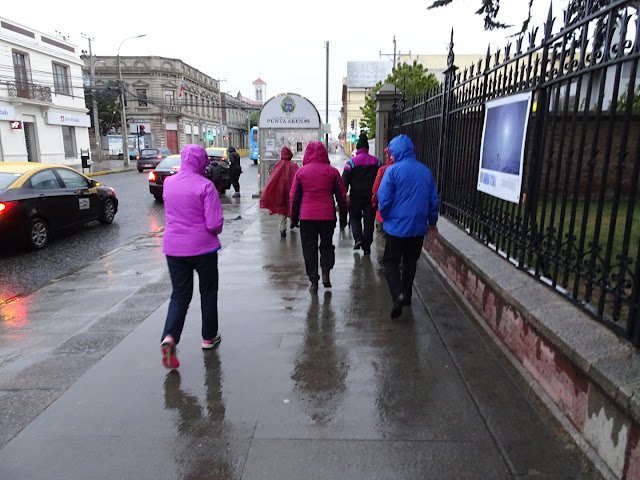 Heading out to do some shopping before entering the National Park tomorrow. The wind was howling, the rain lashing, it was a normal day down here. We are so far south it gets light around 5 am and dark around 10 pm as it heads towards 24 hours of sunlight.

This really may be the last post for a while. The wifi at the lodge in the park is extremely spotty, plus we will be on the go much of the time we are there. Until tomorrow. Maybe.
Posted by Bob and Linda at 4:30 AM