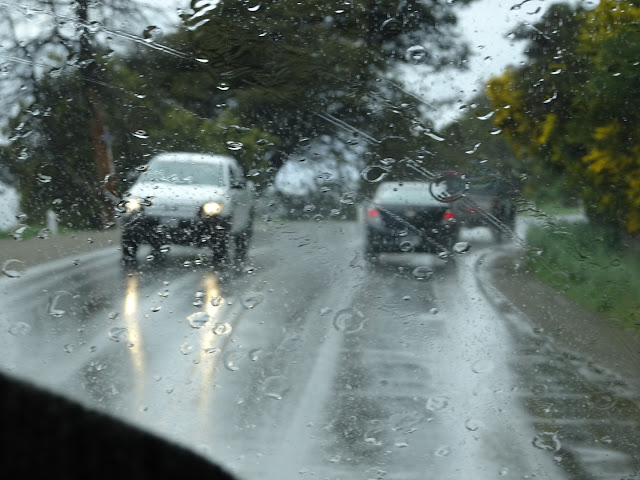 We had a float trip on a nearby river schedule for today, the weather forecast called for rain, it was right. Annie, our guide, had said that in Patagonia the weather changes from minute to minute and from location to location, so who knows what it would be like 45 minutes away where the raft trip started. Several people in the group cancelled out but Linda, I and six others went ahead hoping for the best. 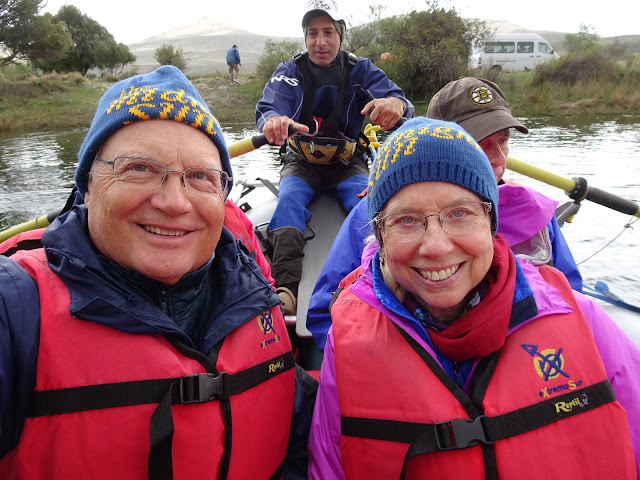 From this smiles you can tell we made a good choice. 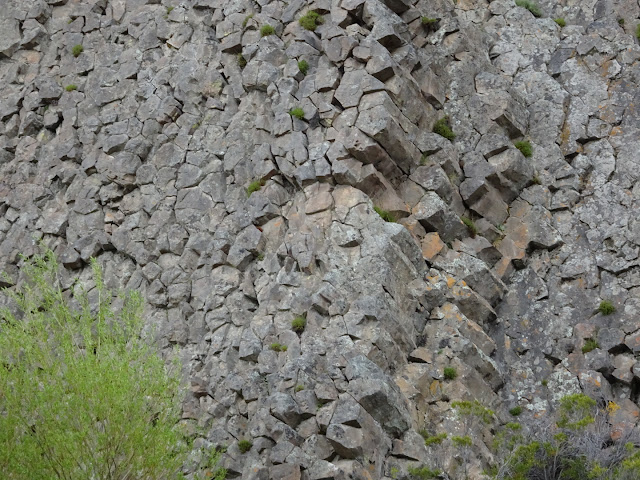 Near the start there was a Canyon that was basalt . Normally the hexagonal blocks of basalt are in a vertical position but here the rock had been twisted 90 degrees so that they were holorizontal, something we've never seen before. 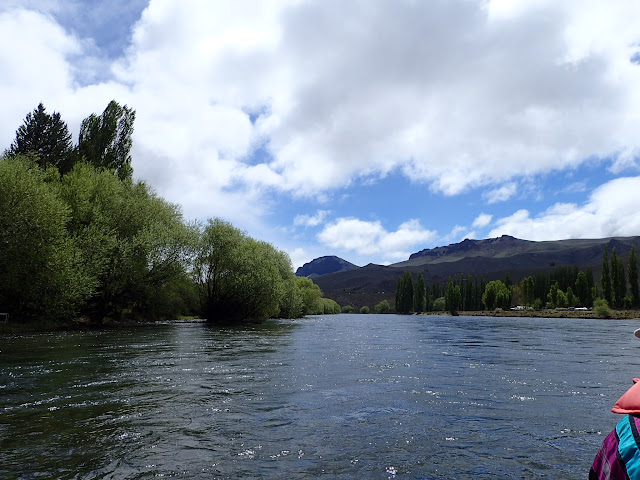 You couldn't have asked for a better weather to take a raft trip. Remember, it was raining when we left Bariloche and as you might imagine, when we finally returned much later it was still raining. Somehow we didn't feel all that sorry for the people who elected to stay at the hotel and watch the rain rather than chance the weather. 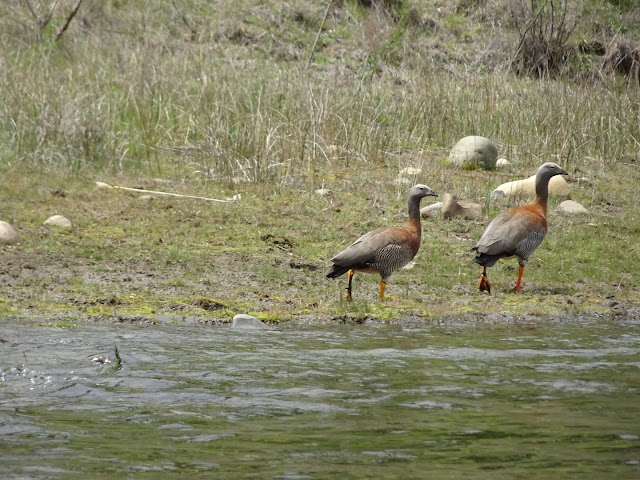 Bird photo of the day. Our guide said they are rather rare in this area. Sorry but I can't remember, and neither can Linda, as to what they are called. 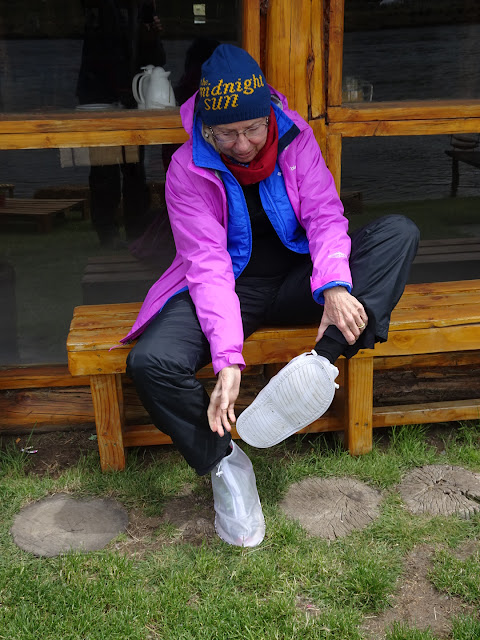 Since Linda requires special shoes for her feet she couldn't buy any waterproof footwear for the trip. Searching on Amazon she found these lightweight slip over waterproof covers that worked like a charm. Several of the ladies on the trip asked her all about them. Smart Linda. 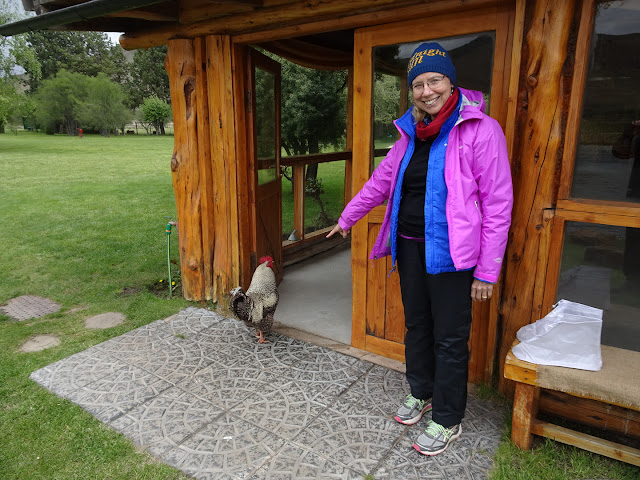 Linda found a friend where we were eating lunch after the end of the float trip. 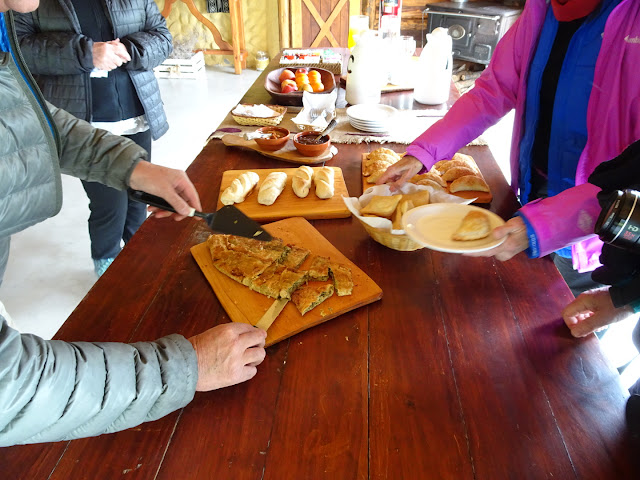 It is amazing how simple yet how good the food has been at the meals we've eating here in Patagonia. We are going to miss it when we finally head home. 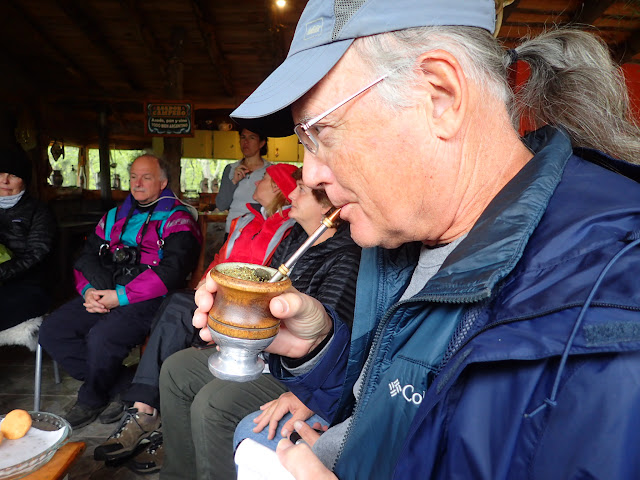 Later in the day the entire group went on what is known as a home visit where the group is hosted by a family for several activities and a meal. The welcoming part was sharing in the experience of Mate. If you don't know what Mate is, it's a special drink made from the leaves of a tree which is extremely popular in Argentina. It's also a case were Google is your friend. 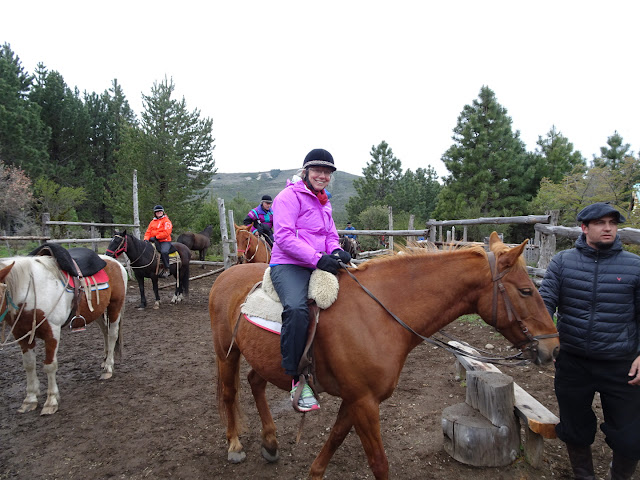 Next came a horseback ride. I think Linda looks like a real horse woman. It was about 45 minutes long and I can report thar no saddle sores were experienced, though we did experience snow. The weather was typical for Patagonia today. A little bit of everything. 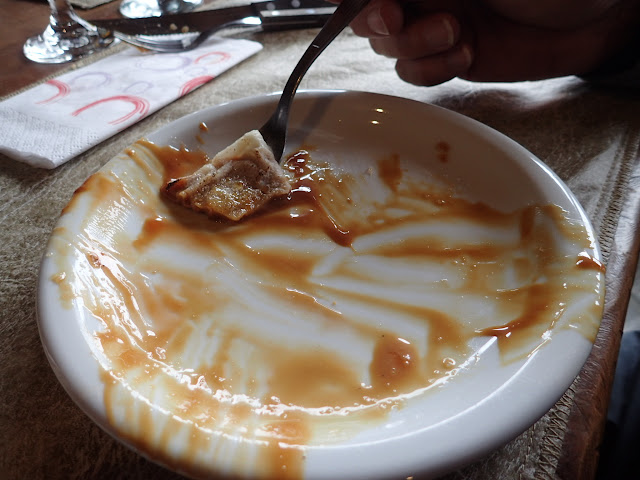 The perfect end to a long day.

Short post today sorry, it was another long day and we're both tired, plus its going to be a very long day tomorrow on the bus as we head out early to drive over the Andes. We were told to expect at least 10 hours on the bus ride, plus the weather report calls for snow. We are also heading into the part of Patagonia where the Internet is very spotty at best, so again if my posts seem to cease its not that I'm not writing them it's the no internet to post them. Until later. Tired but Happy Bob.
Posted by Bob and Linda at 8:15 PM

Email ThisBlogThis!Share to TwitterShare to FacebookShare to Pinterest
Location: (0.0 0.0)