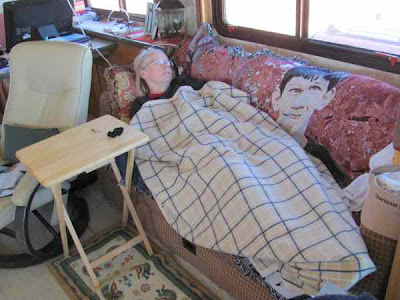 When asked what we did today, I could only answer truthfully, "I suffered mightily from the ebb and flow of the grizzly's growls." At least whatever it is that has laid Linda low has not interfered with her ability to cut loose with the occasional megadecible grizzly growl that would not only wake the dead, but that would also wake Linda herself. I almost wore myself out, what with the number of times I rose from my perch in front of the computer to walk over and check on her, which usually coincided with her saying, "That was pretty loud, wasn't it."

I would usually only smile, when in reality, loud didn't begin to describe the blast from her that had the windows vibrating and plaster falling from the ceiling. Okay, so the there is no plaster in the ceiling of the coach, it if there was, it would all be on the floor by now, such was the concussions that resonated through our abode during the day. It's no wonder it is taking her so long to recover, if I had to worry about shattering the windows of the coach if I fell asleep, it would set back my recovery also. 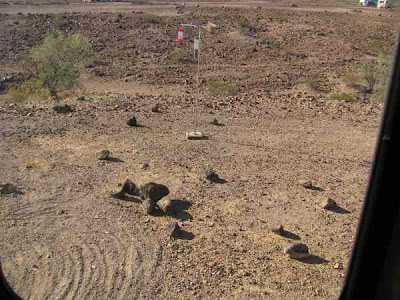 There really were twenty or more birds on the ground around the feeder just before I took this photo. Really, really there were. Some people are wildlife photographers, then there are people like me who are great at taking photos of the landscape where the wildlife just was. What can I say, calling our website by the name: "Just was a Bird Here RVer's" just wouldn't be the same. What can I say. Some people can take photographs, some people can write, and some people can just make a fool of themselves. Linda can tell you into which category I fall.

Some people complain that life does not treat them fair, which is their choice and they are happy with it. We think Life is not a dress rehearsal. Don't be afraid to laugh, love and retire early. Some people never realize that if the winds are blowing against them, they might try turning the boat around. For us, today was a great day even though Linda missed most of it, and no, we never had the TV on to watch the Super Bowl commercials. But honestly, is our Life any less for having missed it?