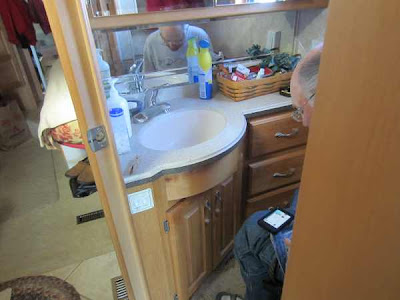 The heck with all that one percent garbage, Linda and I are proud that we sit solidly with the 75 percent. As you can see, though you'll have to take my word for for it, there is very solid proof to back up my part of that claim. I took a similar photo of Linda, but unfortunately it has been banned from these pages by her due to the fact I took it with her camera, which has a wide angle lens. I know that some people may think this evidence doesn't pass the smell test, but I'm sure Linda can testify that it certainly did. And you were beginning to think all I ever posted were bird pictures. Shame on you. 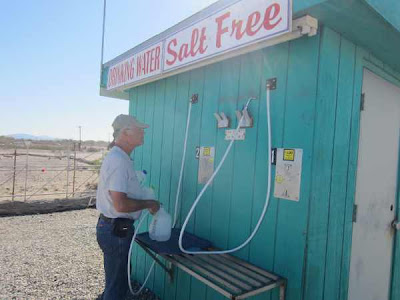 Poor Linda, she has this thing about not liking to drink water that has a taste or has so many minerals that it oozes rather than flows. That meant a trip down to the Christian Center was in order. I guess you could say that on Sunday they save souls and the rest of the week they save your taste buds. At the standard going rate of 25 cents a gallon, it was a real deal as we only had to drive a few miles to get there, plus they have a post office where you can mail letters and buy stamps. Sort of a two for one deal. By the way, it takes years of practice to be able to hit the hole one handed and without looking like I am demonstrating here. Devilish Bob. 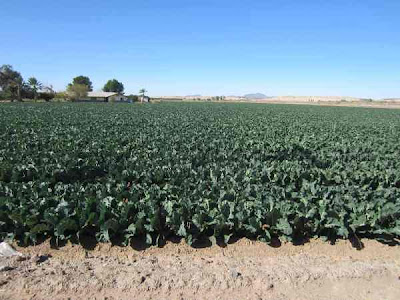 From the Christian Center we headed on down to Imperial Date Gardens. Alongside the road to the date place there was field after field of leafy vegetables being grown and harvested. We saw head lettuce, cilantro and parsley, all of which Linda took a blurry photo of as I sped along. Finally I said, "Do you want me to pull over so you can get a good picture?" to which she gave a very loud, "Yes."

Shortly there afterward I spotted this field with its beautiful dark green color, and said, "How about here?"
"Sure" was her reply. After she had taken her pictures and thanked me for stopping, I asked her what it was that she had taken a picture of because I sure didn't know. "I don't have a clue" was her answer. And dear reader, we shall leave it there. Smart Bob 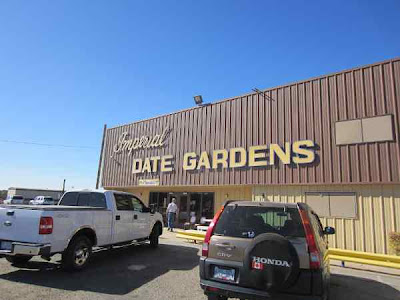 As you can see, people come from all over the world to visit Imperial Gate Gardens. I think I overheard these Canadian's asking if they had blind dates, double dates or even the new one minute dates, but I could have been wrong. Actually we always buy at least one thing when we stop, and that is the date shake. It may be the economy, or just my perception, but I would swear my date shake had a lot less dates in it than in the past. Still it was more than worth the trip, as was the other date products we ended up purchasing. When the date trees are right beside the place you buy them, how can you go wrong. Delusional Bob. I hate to admit it, but I totally blew it. Linda must have taken a couple of hundred photos of the cactus out in front of the building, and I was so busy sucking on my date shake I never took a photo of her taking a cactus photo. Well maybe it wasn't quite a hundred photos, but it sure seemed like it. I must be getting old and enfeebled missing out like that. It pains me to see Paul of R Sanity RV Adventures post a photo of Marti taking a cactus photo and me miss out on taking one of Linda. As Linda's really neat, but "much older" sister Katherine says, Getting older is pigeon poop. 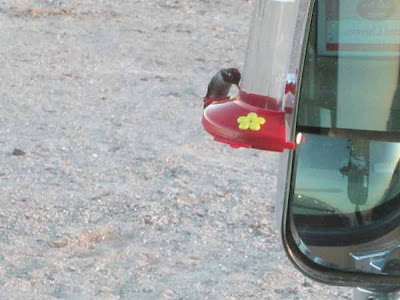 Knowing Linda as well as I do, she would probably never forgive me if I didn't post at least one photo of her beloved hummers at the feeder, so Linda, this one is for you. Life isn't always about problems and worries. Some days we need to just put all those small things aside and concentrate on the joys of Life. Such has been today's Daily Journal. Life is not a dress rehearsal. Don't be afraid to laugh, love and retire early. Plus there is nothing wrong with continuing to laugh long after you are retired. Wonderful Linda, Lucky Bob Fantastic Life.