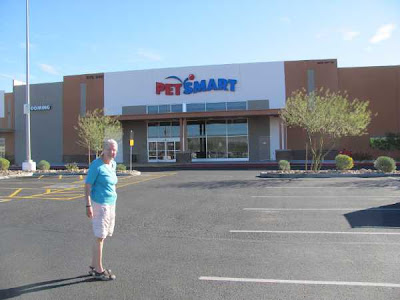 Our first morning in a town with a pet store since Red Rob met his untimely end, and that is where we were headed, to get Red Rob's replacement. I have never figured out what the difference is between a Petsmart and a Petco because they look pretty much the same. I do have to say that in general the fish in Petsmart always appear to be healthier and the live plants are in better condition. Based on that, I guess we are lucky that the pet store in Bullhead City is a Petsmart. Whatever it was, you can see Linda was impatiently waiting for me take the photo so we could go inside and buy a Betta. 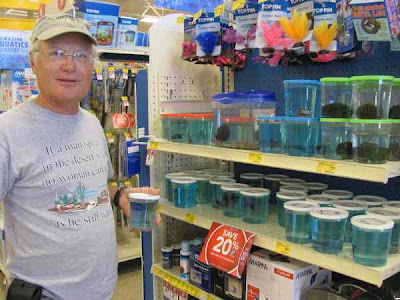 Look at all those Bettas. If you're looking for the very best one, look no further than Bob's hand. There you will see the yet to be named Blue Max. As for the origin of Blue Max, Max comes from the name of our son's cat who is a real live wire. The blue is more obvious, as it reflects our state of mind after the loss of Red Rob. 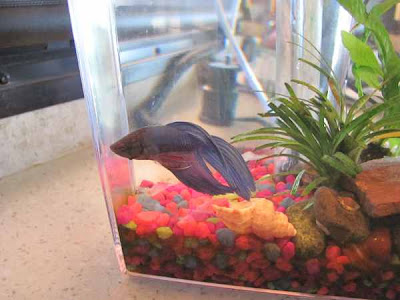 Not the best photo of our new boy, as he will need a few days to acclimate and have his colors brighten up. For now, he's mostly blue on top, with red and blue below. He still has a whitish cast to him which is due to the stress he is going through. The great thing is that he has been very active in the aquarium, exploring all the corners readily taking the large Betta Bits that Red would never eat. He is also leaving the shrimp alone, meaning he just may not have an aggressive nature. As Linda said, "We never realized how much we missed Red." 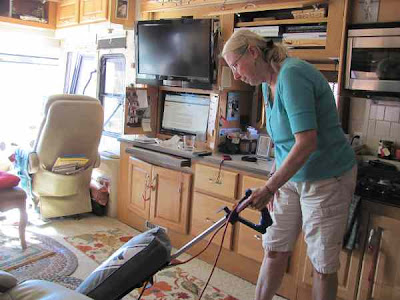 While the aquarium was being explored by its new inhabitants, Linda was busy making the coach more inhabitable for we humans. Besides the sweeping she also managed to do four loads of laundry, three of which I didn't realize she had done, meaning I didn't help her fold the clothes. Bad Bob. On the other hand, the coach is as clean as it has been in weeks, our clothes are clean and fresh smelling, and I later fixed her a strawberry margarita. The latter more than making up for my laundry miscues. Then at the five o'clock hour we sat outside with George and Kelli until sun settled below the horizon and the day drew to a close. It turned out to be a very good day indeed, and what more could we ask for.