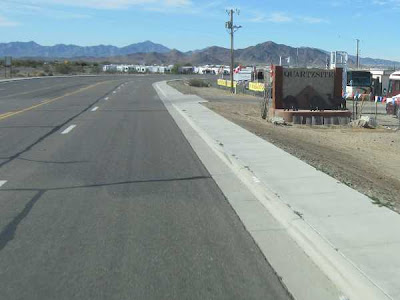 Time to say goodbye to Quartzsite for a while, and when we return in late April it is likely to be just a shell of what it is now. And now sure isn't what it was just a couple of weeks ago, either. Before leaving town we fueled with diesel at the Arco at the east end of Main Street, and one thing that always amazes me is how the price of fuel varies. Leaving town we saw it was a few cents cheaper at the Chevron and a whole lot more expensive at the Shell. Fortunately, or unfortunately our route didn't take us past the zoo that is the Love's and Pilot stations on the west end on town, and soon we were heading north on 95 towards Bullhead City where we will be staying for the next couple of days. 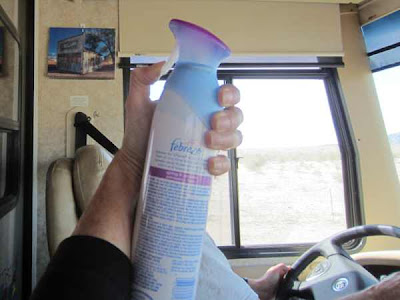 Looking at this photo I realized that some of the more perceptive readers of these daily musings might see something in that photo that isn't there. Yes, that is a can of Febreze Linda is holding in her hand. And yes, she is spraying the air with it. And I'll concede that yours truly is partially hidden behind the can of air freshener. But I am most certainly NOT the reason the air is being freshened even though that appears to be the case. It seems that boondocking for long periods of time caused the water in at least one the waste drain traps to evaporate, the result being a not so subtle reminder of how things were in the days of chamber pots. I told her to pour water in the traps, she grabbed the air freshener, which just goes to prove how smart I was in marrying her. Good Bob. 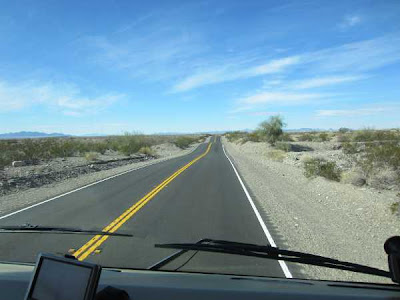 Certain portions of the drive were more interesting than other. Actually I should probably just say that the sights, sounds and smells of the drive varied from place to place, which would encompass everything. Linda named these portions of the drive, The Dragon's Back, and I really had to agree with her. For not driving any great distance I couldn't believe how tired I was when we arrived in Bullhead City. I'll just blame it on the heavy traffic, the narrow roads and the incessant whoosh of air freshener. Or is it possible it could have been brain fade due to air freshener overload? 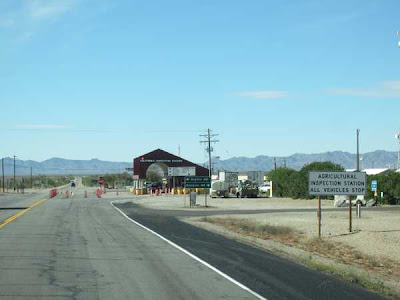 Now we know how the other half lives. Our first time in 30 years going through a California Ag Inspection Station with out of state plates on an RV. Linda had to laugh when the inspector didn't recognize the giant jumbo Kiwi fruit we had bought in Quartzsite, but which had been grown in California. Thinking back we should have said, "Why that's what a Kiwi Fruit grown it Texas looks like, they're not at all like the puny little California, want to be kiwi's they sell in the stores around here. 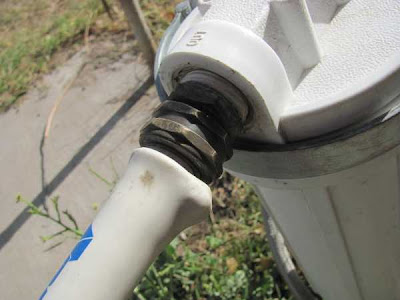 For the past several years the end of the water hose has been a pain, not only figuratively, but also literally. That ended tonight when I took off the old oversized hose clamp and replaced it with the small one I had bought in Quartzsite. It was as if everything that could go wrong, did, but with the help of two different types of pliers, a screwdriver, a file and the socket set, the job was done at last. I will not go into how the screwdriver slot in the new clamp was only partially cut out, or how a burr on the clamp prevented the right socket from being used. I can say that by the time I was done, the clamp was looking like it should have if it had been made right in the first place. I even managed to pull the PVC protector over the clamp so it is even better than new. Good Bob.

We also got a kick out of surprising George and Kelli who we have met several times in our travels over the past few months. We read in their blog that they were staying at a park in Bullhead City, and that was why we picked the same park to stay at. We ended up parked right next to them, and to say they were surprised to see us pull in is a definite understatement. It's the great thing about this Life. If you want, you can go miles out of your way surprise someone, and get as much or more enjoyment out of it than they do. We know fulltimers who have their reservations made months and even years in advance. That works for them. Sara N. Dippity and spontaneity work for us. The key is not in how one does it, it's the fact they're doing it and loving it.