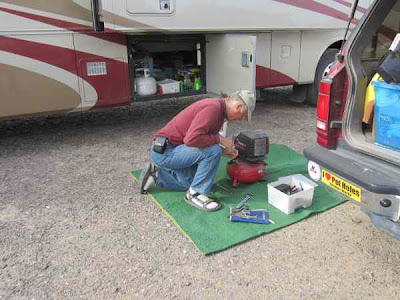 The first project of the day was to replace the quick connects and install the new air hose. There is a reason why we were doing this here at Quartzsite, namely because it's not very far into town to buy the things we didn't buy that we now needed to buy to make what we originally bought work. For example, the quick connect that came off the compressor had male pipe threads. The replacement I bought had female threads. The solution was a trip to Herb's Hardware for a brass nipple, and soon things were definitely looking up. 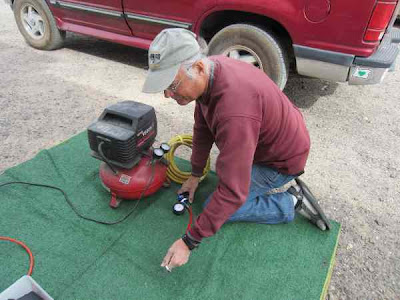 The moment of truth. Well, not really, but Linda sure did have a big smile on her face when this test showed that there were no leaks and the quick connects did exactly that. It wasn't anything major in the way of fixing something, but the satisfaction of a job well done is not always in the size of the project, sometimes it is in the knowing that you did a good job. 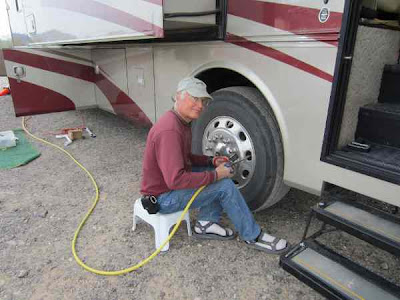 The reason for all the Mr. Fixit activity, airing up the tires on the coach. I wanted to increase the air pressure in the tires by five to seven pounds over what they have been inflated to, plus the tire monitor was saying that the tire I had messed up during the process of installing the tire monitor on it, was, shall we say, a little lower than it should be. In the end the front tires were at 110 psi and the rears at 108 psi, which we will monitor for a while, with the thought of increasing the rear tires by four or five pounds. One of these days we are going to have to get it weighed again so we will know for sure what the tire pressures should be, but until then our tire pressures will be under Linda's watchful eye as we travel down the highways of Life. 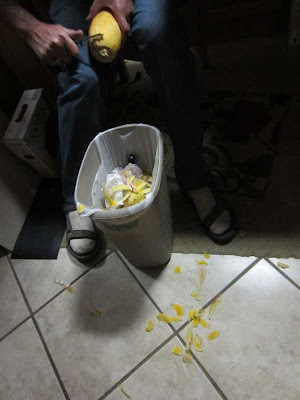 Just to show that not everything turned out as it should today. Dinner was one of our favorites, butternut squash soup, and it was absolutely delicious. However my technique with the vegetable peeler was a little wild according to she who has to mop the floor. And I had thought I was doing good, leaving no bits of peel on the squash. To hear Linda you would think I had left no floor tile uncovered with squash peelings. Just kidding, just kidding.

Actually she was laughing at my efforts at squash peeling as she picked up the pieces, which is what Life is all about. Glass half full, glass half empty. A mess on the floor, something to angrily clean up or something to laugh about. The choice is ours.