This morning found us traveling by minibus far up above Cusco. Cusco was The religious center of the Incas in this region, but because of how their religion was practiced and the sheer number of people, the common people viewed the city from a site overlooking the valley where Cusco lay. That site was our morning’s destination. 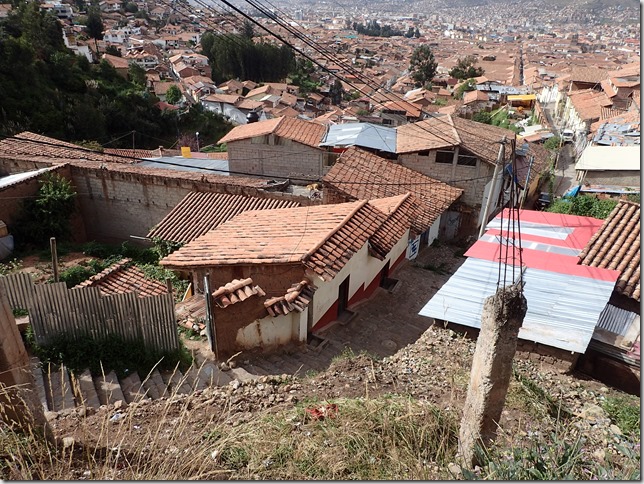 Pulling off to the side of the road, we got out to take in this view. We soon found out why. The steps at the lower left of the photo and the street further down the hill that curves then becomes a straight line in the upper right marks the old Inca trail into Cusco. 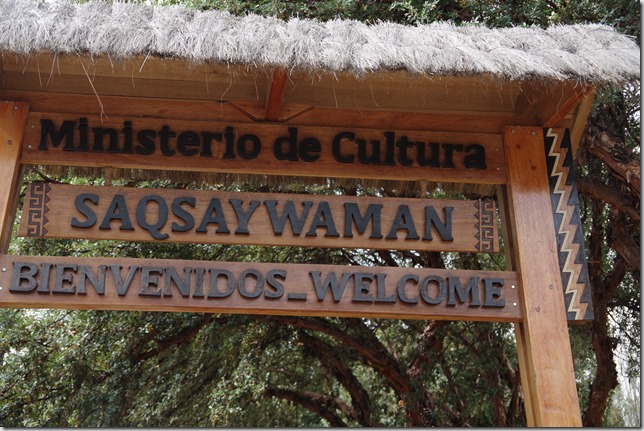 The Inca’s named the site Saqsaywaman. The syllables, say them fast and you’ve got the pronunciation. Have trouble with it? The easy way to say it is: sexy woman.  And no, as far as we can remember, there were no stories about young maidens being sacrificed at Saqsaywaman. (Parenthetical comment: It is really hard trying to write about what we heard a month after having visited the site. Forgetful Bob. And Linda is no help either.) 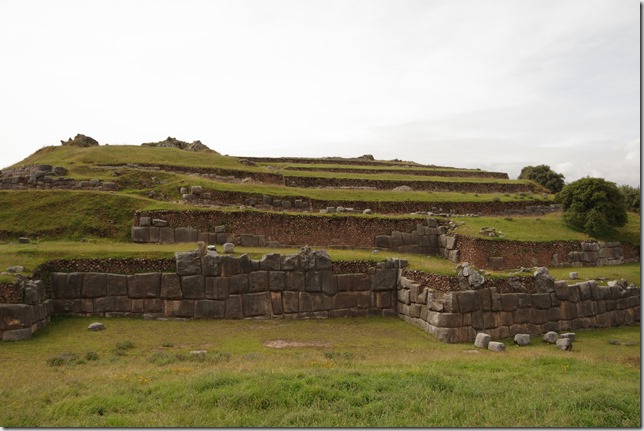 So what is at Saqsaywaman? Rock walls, rock wall and more rock walls. Though what we see today is a minor portion of what was originally here as the Spanish took most of the stones to build their government buildings, houses and churches in Cusco that kept falling down whenever there was an earthquake of significant magnitude. Seems our history books have it all wrong about who was the advanced civilization and who where the savages. 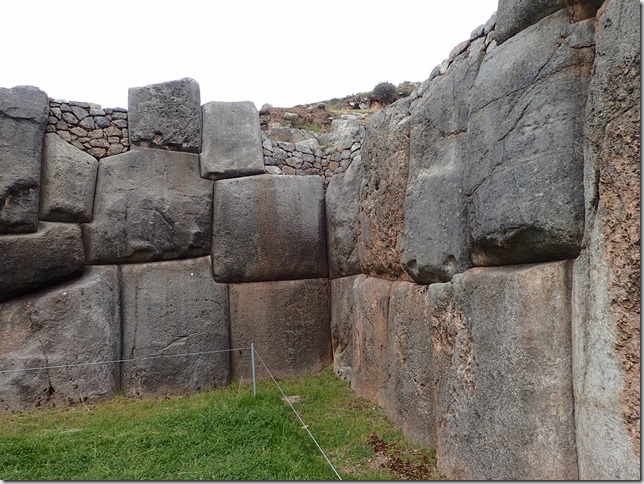 It is amazing just how exact and accurately the stones fit together. And the fact is, we still don’t know what method the Inca’s used to get them to fit so precisely. Obviously the stupid Spanish weren’t intelligent enough to understand it or utilize it. 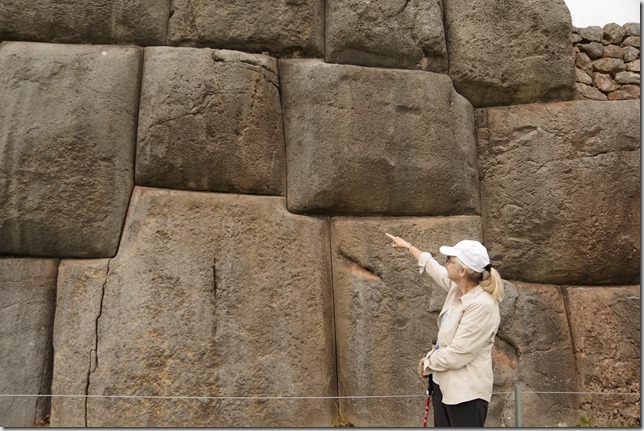 This gives an idea of just how large the remaining stones are. 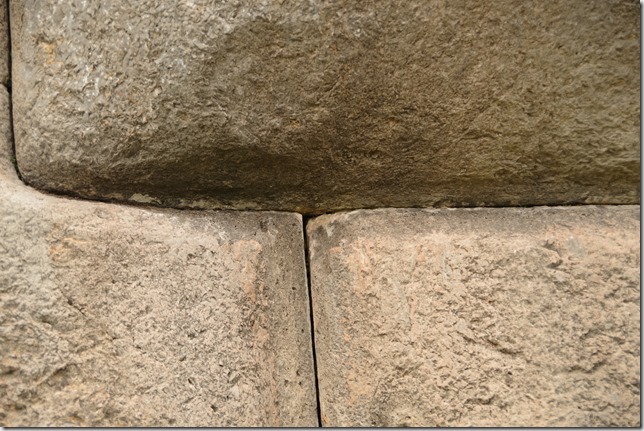 Close-up the area Linda is pointing at in the previous photo. Look ma, no mortar, no fall down in earthquake even centuries later. Many joints are so tight you can’t even slide a piece of paper between the stones. Unfortunately I wasn’t thinking at the time or I’d have a photo showing it. Guess my DNA showing I have some Spanish ancestry is correct. Bob, the partial uncivilized savage. 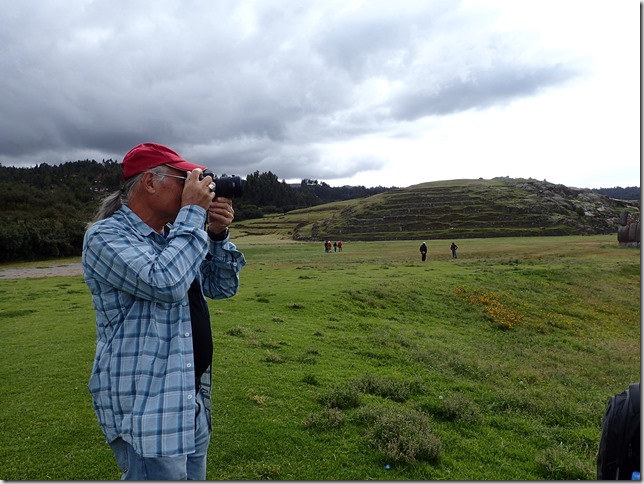 Just to prove I did take some photos of the site. I really was interested in what the guide was telling us about the place, that the thought of taking photos was not anywhere near what it should of been. The really sad thing is that I don’t seem to remember much of what the guide was saying. Since we were above 12,000 feet I'll blame it on the altitude, and likely be correct. Oxygen deprived Bob. (Is that another way of saying I was partially brain dead?) 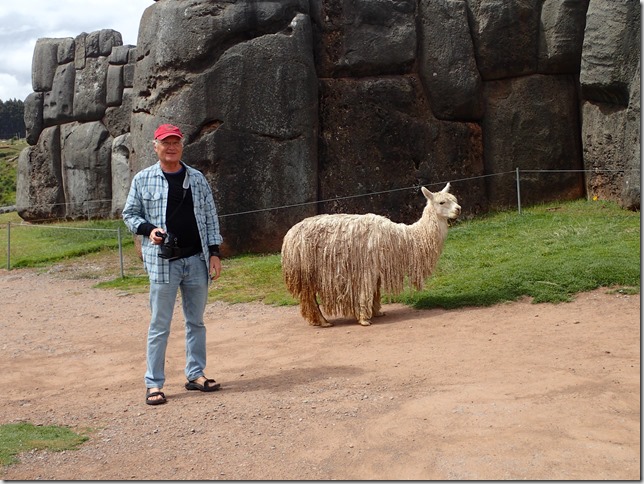 llamas were attempting to keep the grass controlled. This but one of the several dozen photos she who likes llamas took. 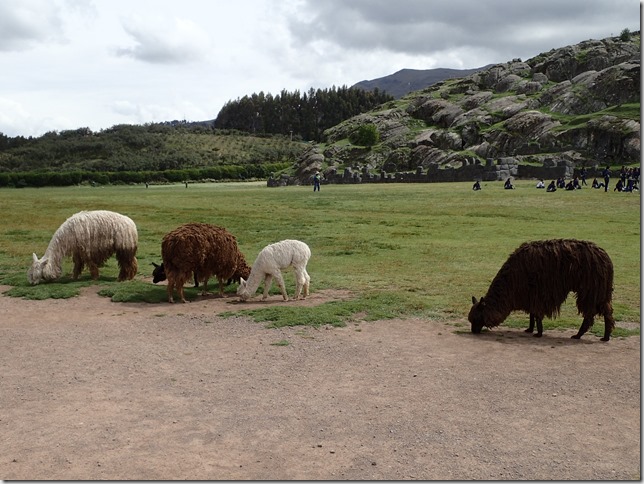 I do remember the guide saying there were three different types of llamas here. Beyond that my mind is a blank. 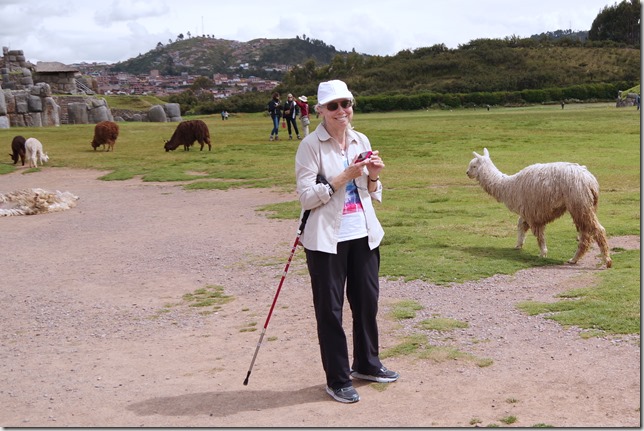 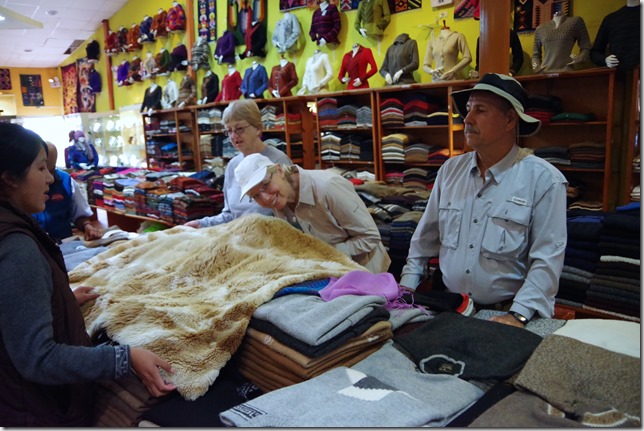 There is more than one way to skin the cat when it comes to touching a llama. 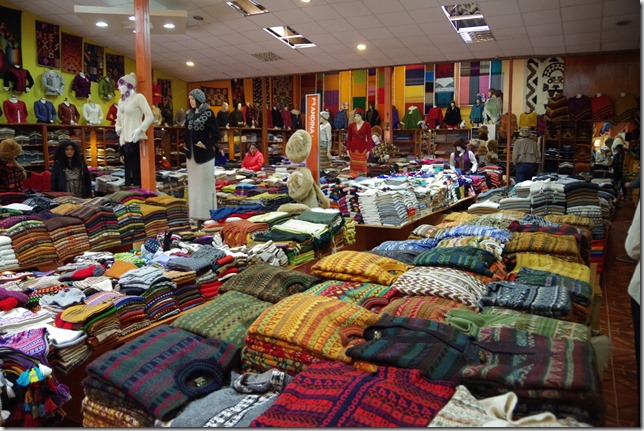 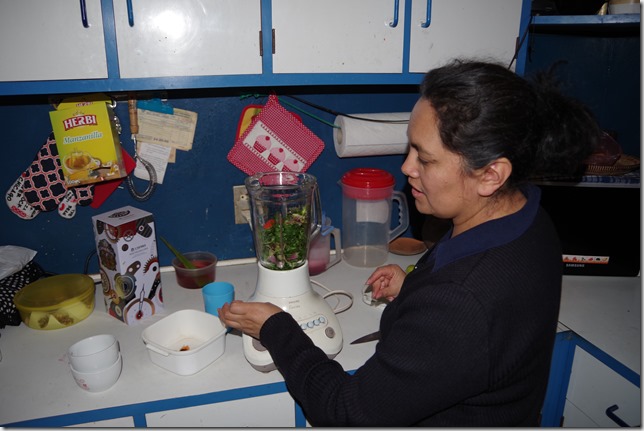 Next was a home hosted meal. One thing we had learned about Peru is that there is a hot sauce or two that accompany every meal. They are basically all the same, yet completely different. Onion, garlic, cilantro, lime, salt and peppers. It is the variety of each ingredient and the amount added that makes the sauces/salsas so different. 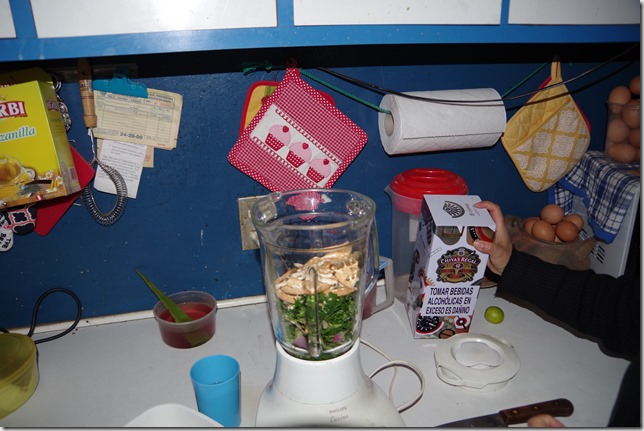 Then there is the special ingredient that puts it over the top. You can see what it was in this case. Saltine crackers. Not not 12 year aged Chivas Regal. The crackers were kept in the Chivas Regal tin. The consistency of the sauce is just as important as the flavor and spiciness. All three must be in harmony or the sauce is nothing special. At the end small slices of an extremely spicy were added and tasted to attain the exact degree of heat desired. Two kinds were served with the meal, spicy and really spicy, yet neither was burn your mouth hot though there was definitely heat there to go along with the great taste. Hot sauce made the way it should be. 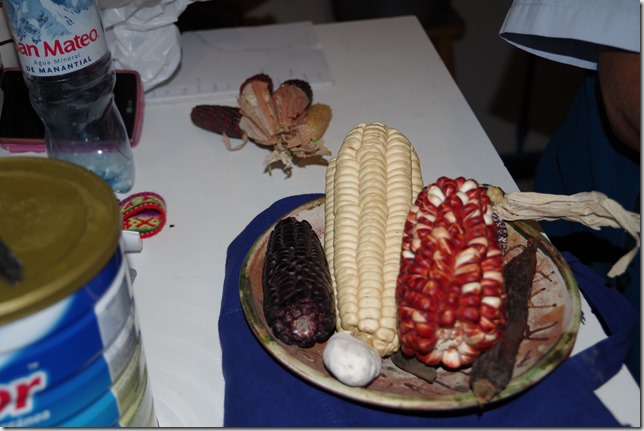 We in the states have no comprehension of corn, what it can look like, taste like, or be used for. 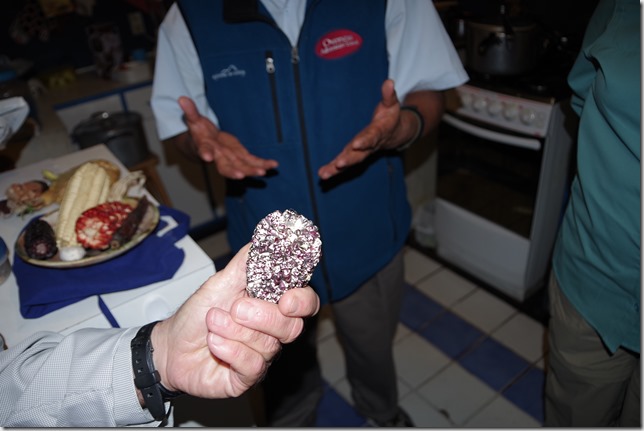 Everywhere you turn there is another kind of corn. 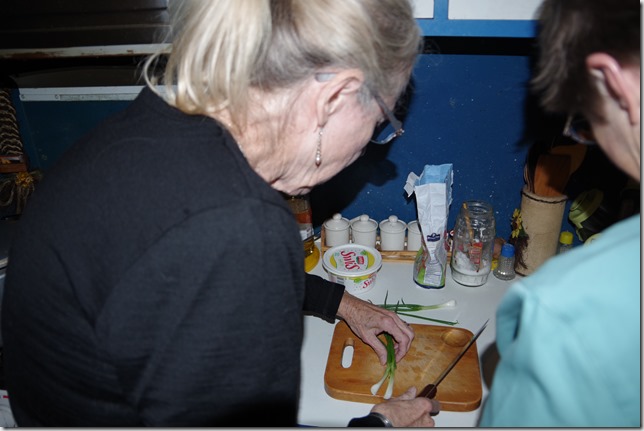 Everyone had a hand in fixing the meal. 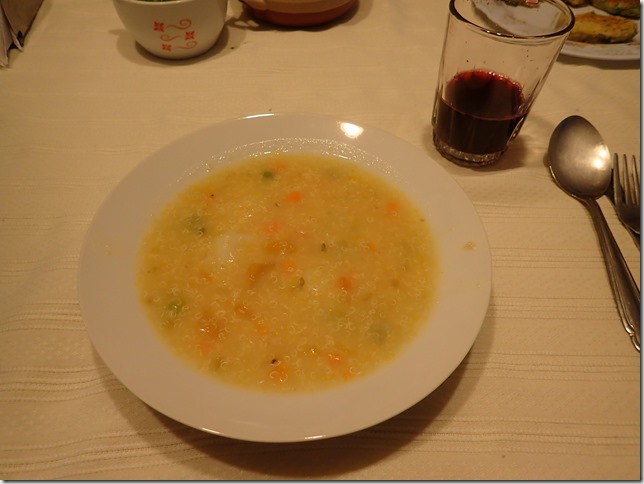 I’ve been saying that we seem to have quinoa soup with every meal. Here’s more proof. 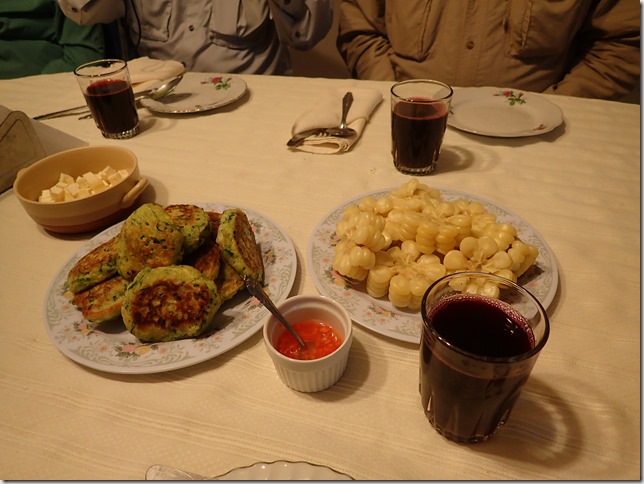 These home hosted meals are one of the things we love about O.A.T. tours. In this case it was a family that was low middle class. There were multiple courses as is typical of Peruvian meals, but no meat was served. The quinoa was the protein. The corn is cut into three row rounds, but was it ever good. The beverage is made from boiled purple corn and is it ever good. 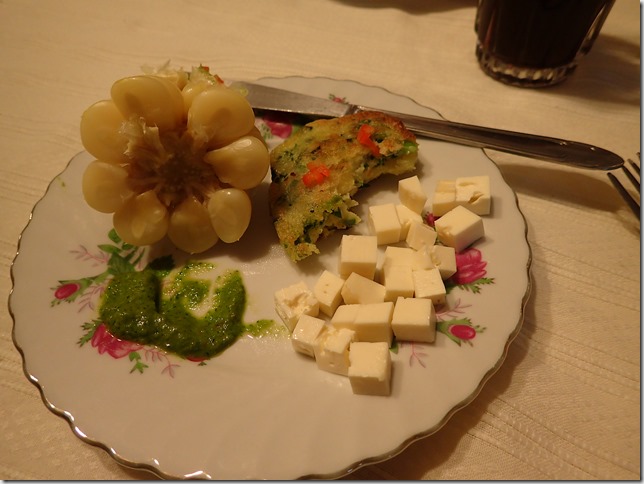 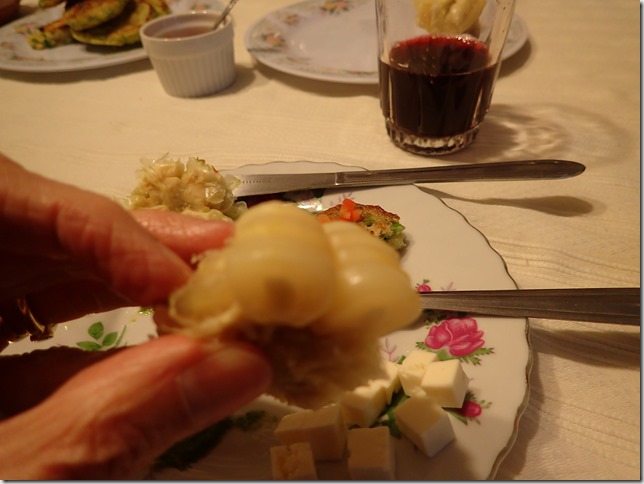 I believe Linda took this one to show what happens to the corn. I’ll title it corn round just prior to entering mouth. If she’s willing to take the photo, I’m more than willing to post it. Considerate Bob. 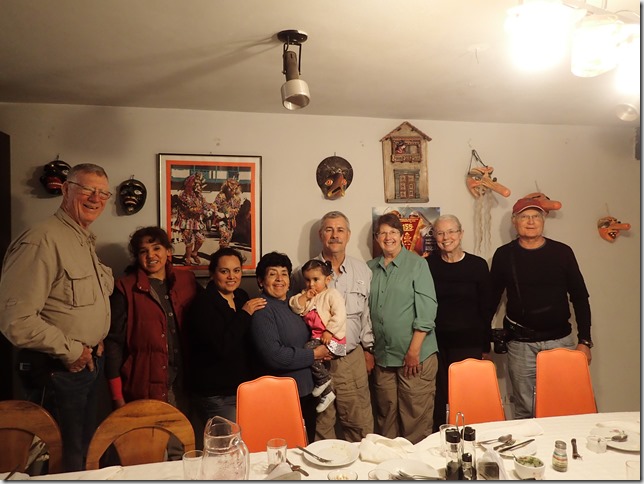 In every case where talked about housing, we were told that multiple generations all live under the same roof. Two sisters, their mother and her grandchild. Not much in the way of speaking English just as none of us spoke Spanish, but much in the way of understanding. 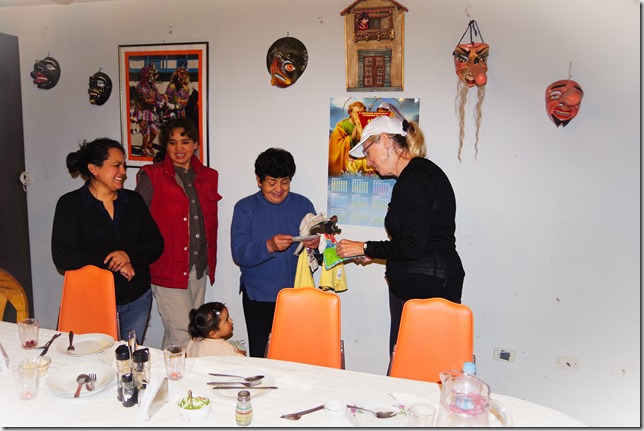 A gift given to our hosts to say thank you. I love the fact Linda always hand makes whatever she gives the families as a special way of saying she really appreciates the time they took to share their home and lives. 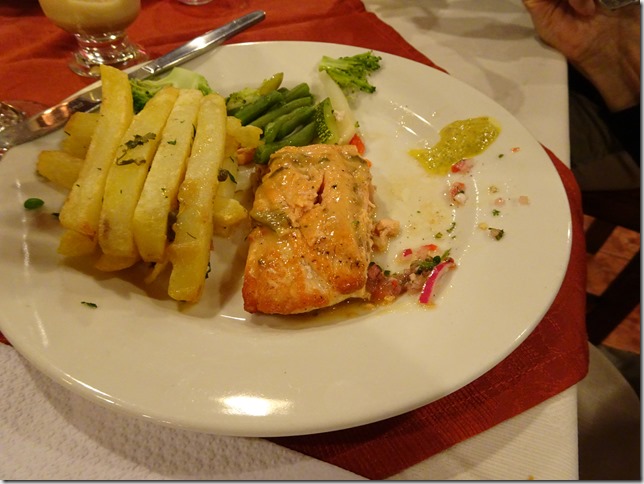 Restaurant food for the evening meal. It was okay, but after what we had for the afternoon meal, let’s just say there was no comparison. 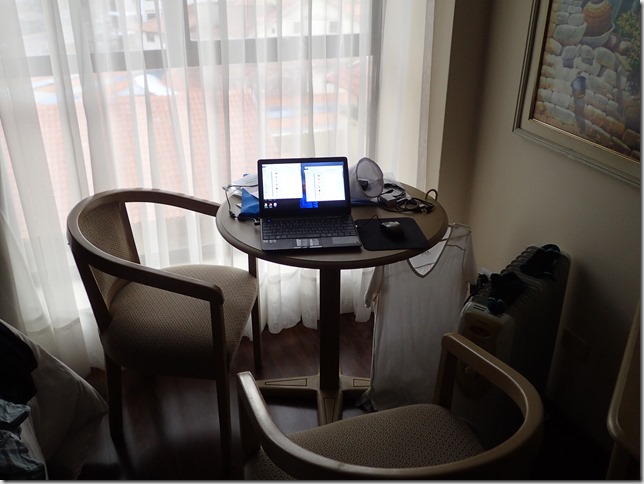 I took this photo between the time we retuned to the hotel in the late afternoon and we went out again just to show that I tried to write the blog during the trip. I really did, but there just wasn’t enough time in the day. Well intentioned Bob.
Posted by Bob and Linda at 7:21 PM