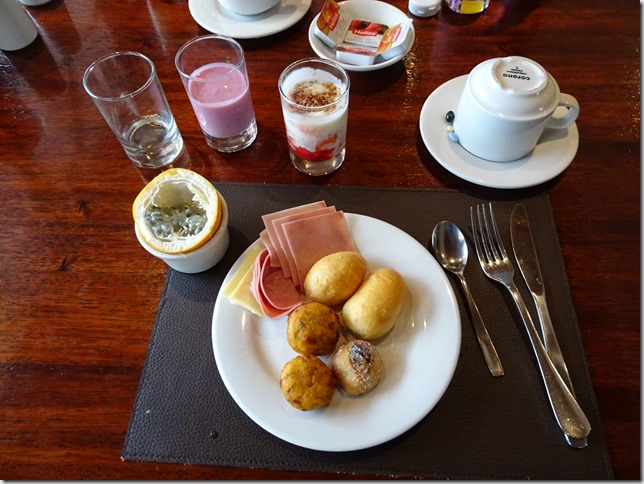 I have to say that I really like the breakfasts in Ecuador. There’s no photo, but Linda, the fruit lover was in her on version breakfast heaven. 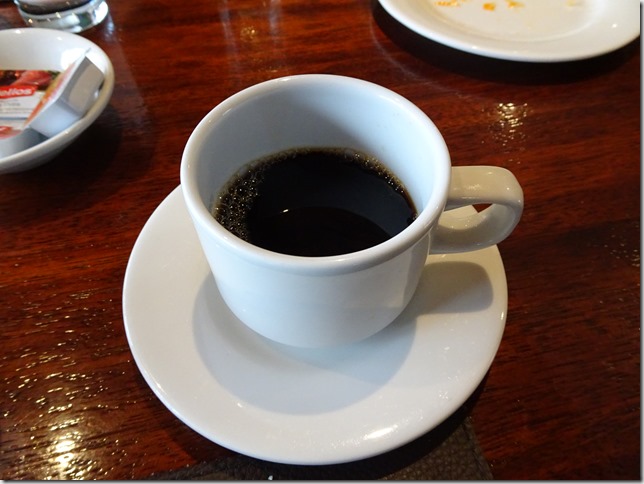 But even better was the coffee. We are talking restaurant coffee here, but with Ecuador being a coffee producing country, and the coffee as strong as we make at home, we both were making repeated trips to the coffee pot. 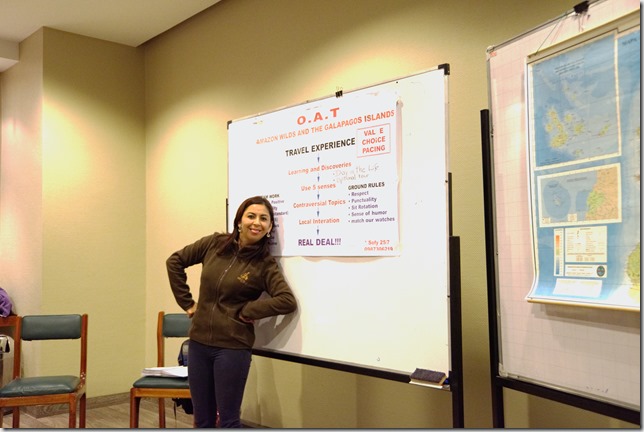 Our guide, Sofy. Point the camera at her and she posed. As time went on I got somewhat good at catching her unawares. It’s little things that make the OAT guides special, that and the really know their stuff. 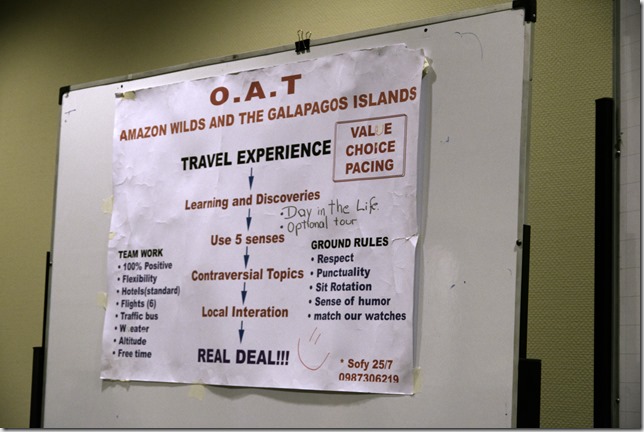 The principles we will live by over the next couple of weeks. 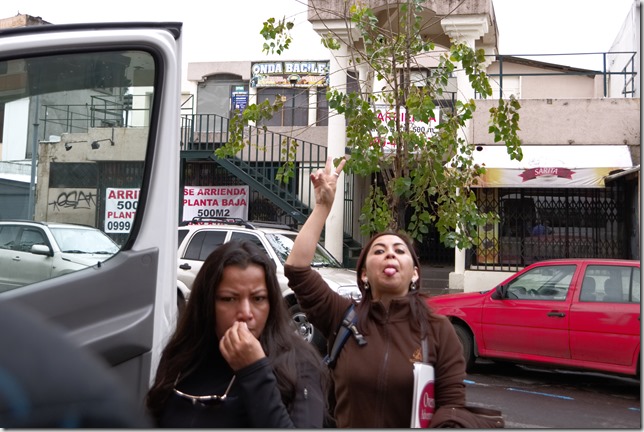 See what I mean! FYI, the serious one is Jessica who will be our guide in the Galapagos. Don’t let her fool you. She made the energizer bunny look like a sloth once we got the the Islands. 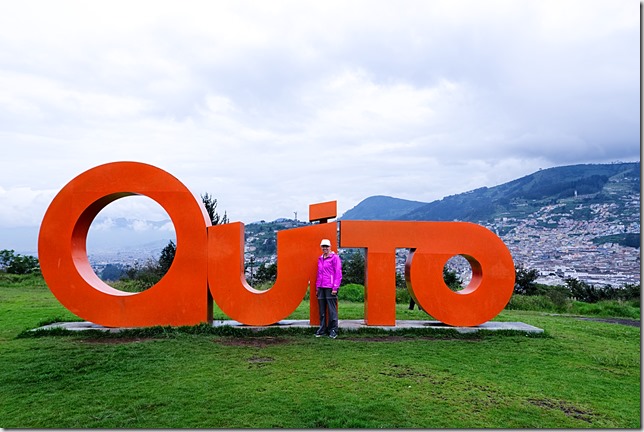 Just to establish were really were in Quito, Ecuador. 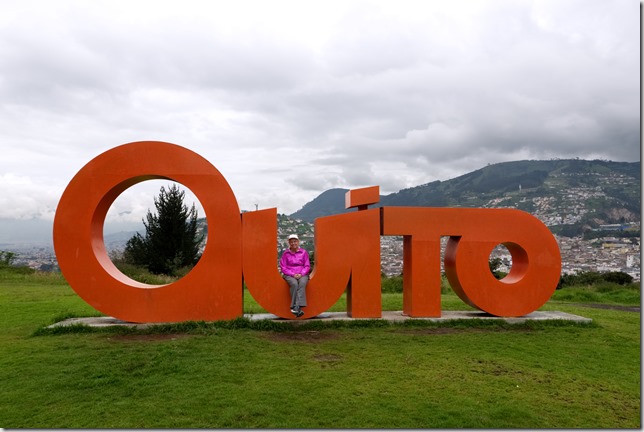 What can I say, I think they are really cool photos. 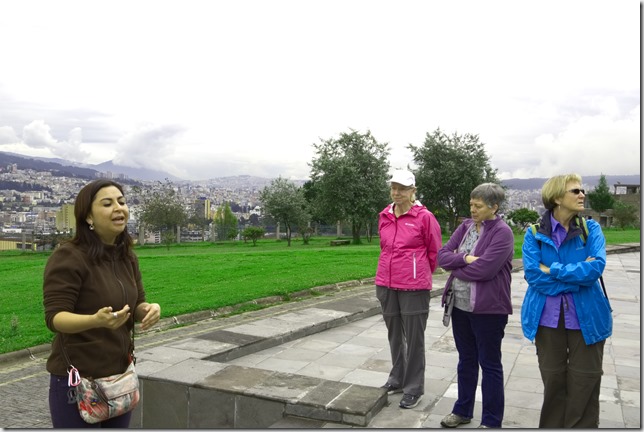 Linda, the sponge, soaking up everything Sofy said. 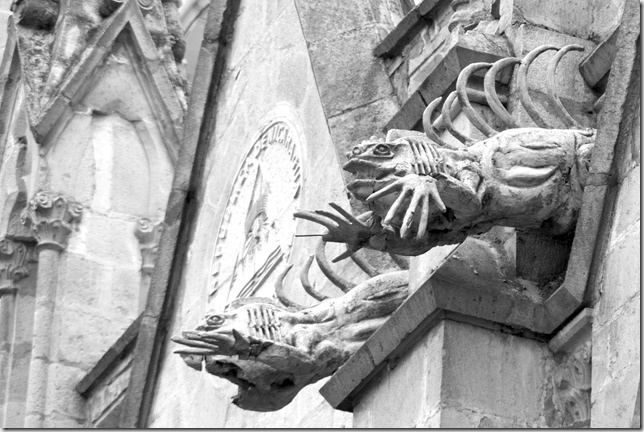 These gargoyles on the Basilica del Voto Nacional are iguanas. Next week there will photos galore of the real thing. 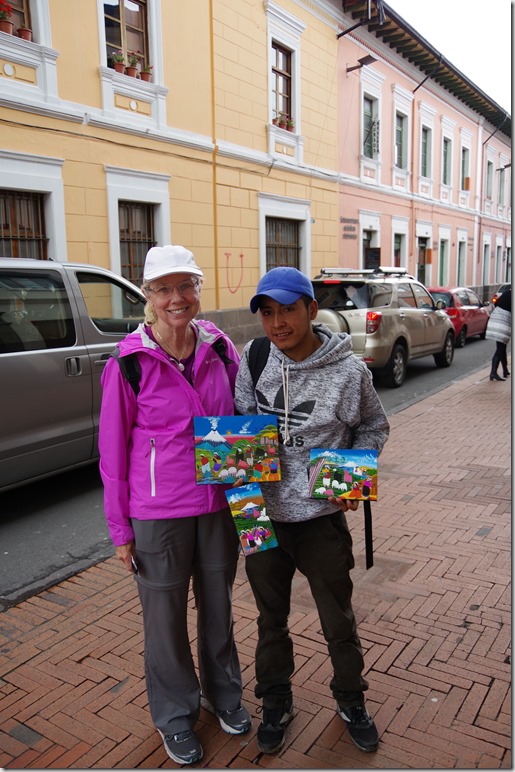 This young man was from a small countryside village. He had a talent for painting and was selling these paintings. The canvas was actually sheep skin, and colors just popped. We just had to buy one for the coach house, and at $15 dollars, it was a steal. Just so you know, the currency of Ecuador is the US dollar. They send gold to our Treasury Dept. and we send them US currency, both bills and coins. 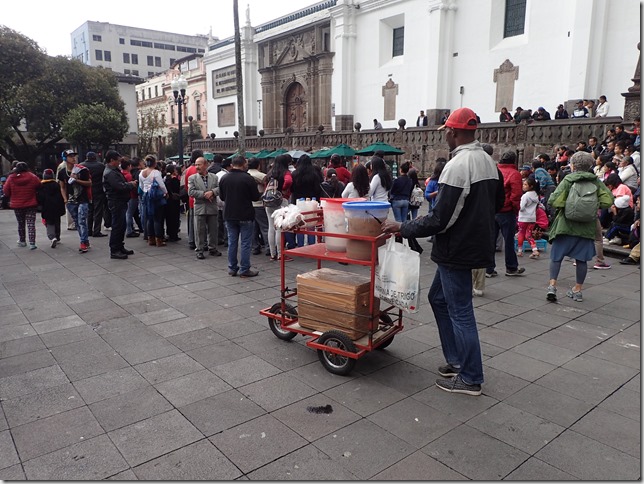 The crowds in the main square, Independence Plaza. 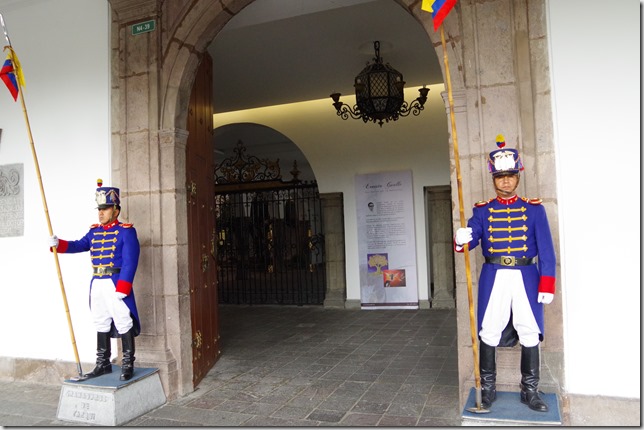 Guards outside the Public Entrance to the Presidential Palace of Ecuador. 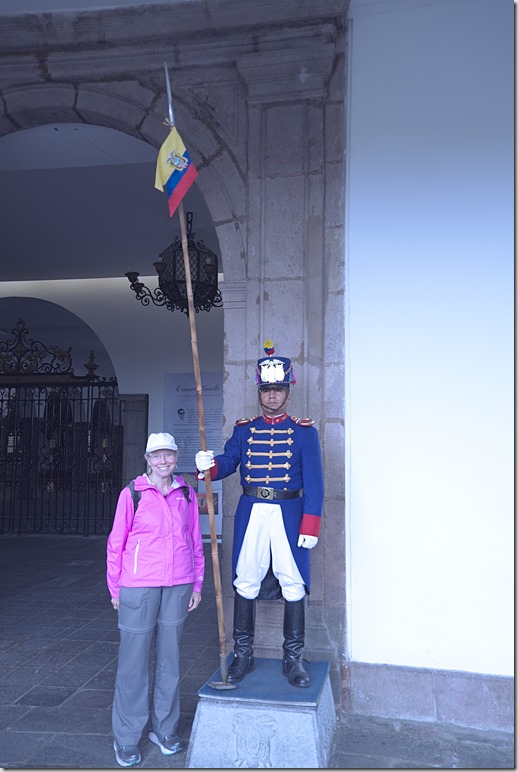 Just like at Buckingham Palace, they never move, and never change expression. We watched as other Americans made faces at them, etc., trying to get them to change expression. Later an Ecuadorian group came by, they took photos only, no clowning around. It’s no wonder we show so little respect, even in our own country. 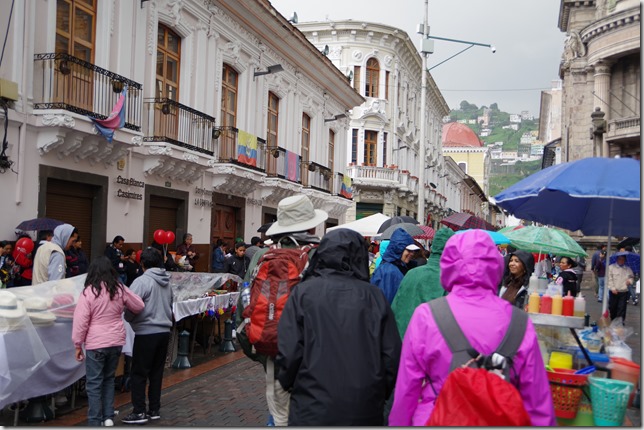 One of the very few times it rained during the trip. 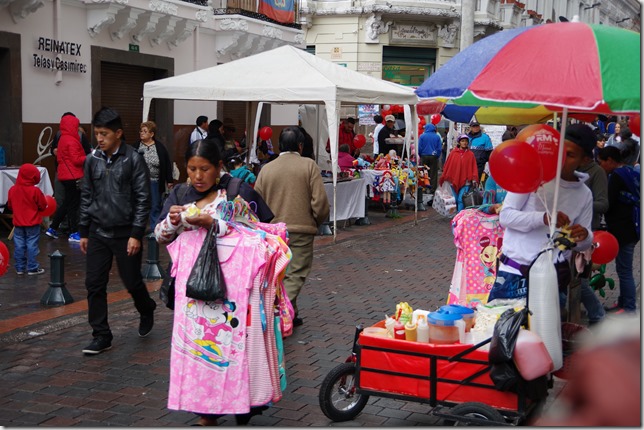 The streets are literally alive. 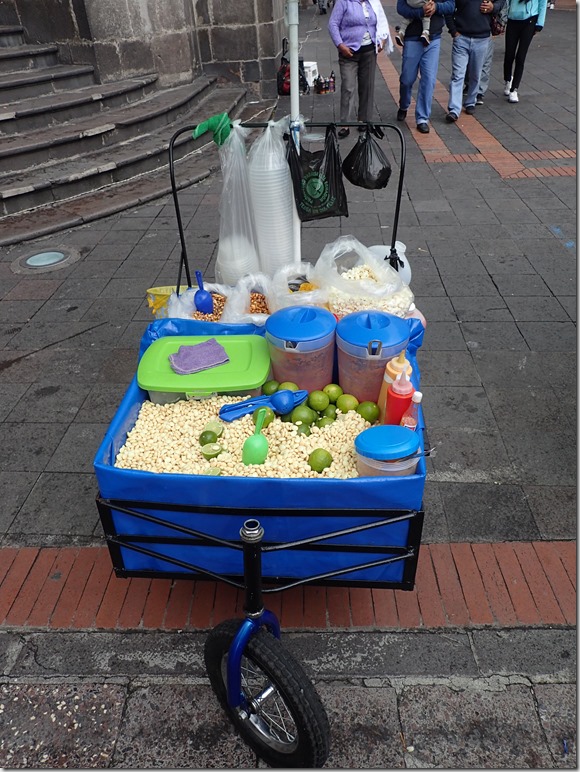 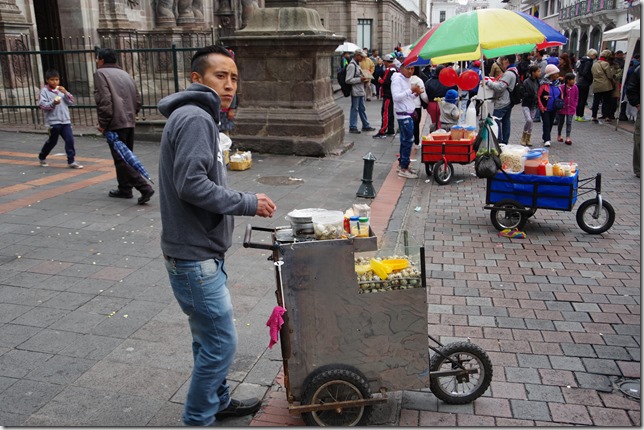 See what I mean. This fellow is selling quail eggs. 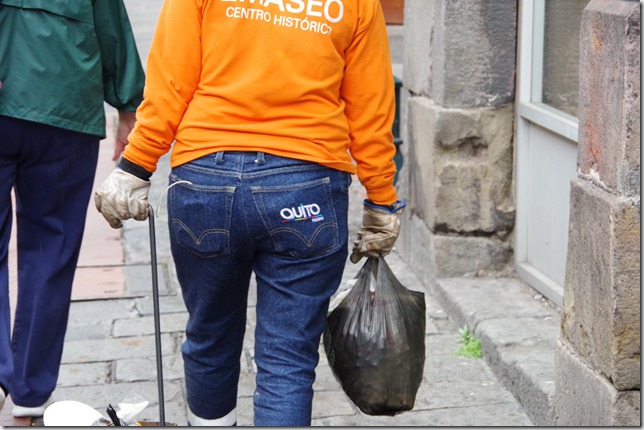 City worker keeping the sidewalks of the central historic district of Quito clean on a Sunday afternoon. Have to love the Quito on the jeans pocket. 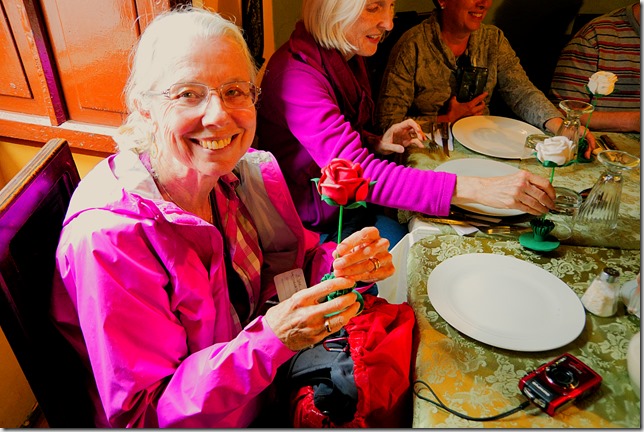 Handmade roses from the restaurant owner for the ladies on Mother’s Day. 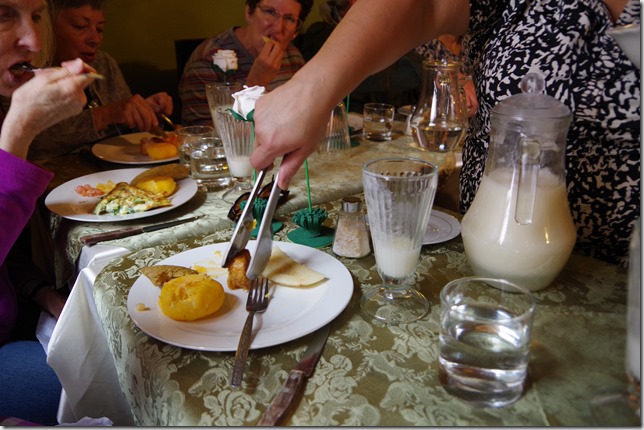 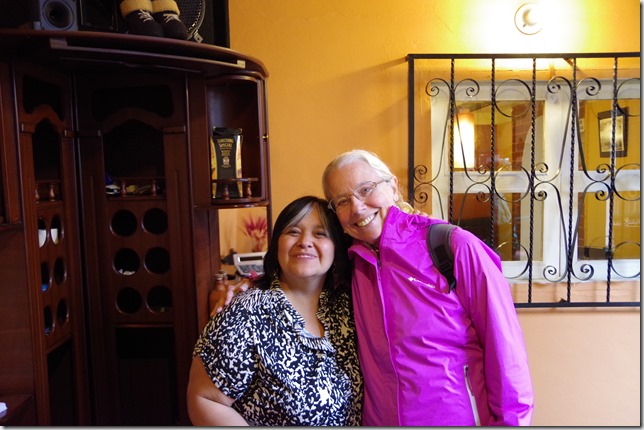 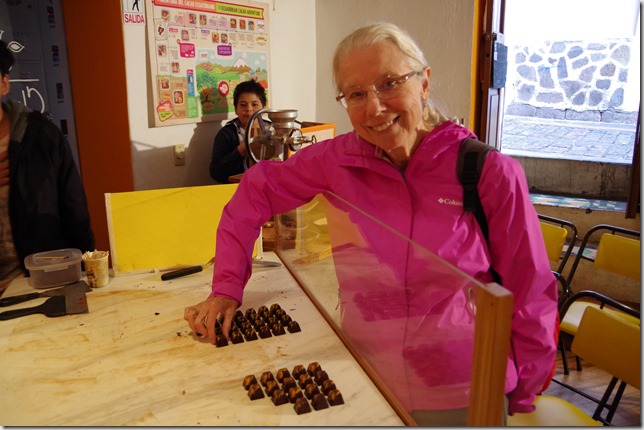 Chocolates on Mother’s day? You better believe it. 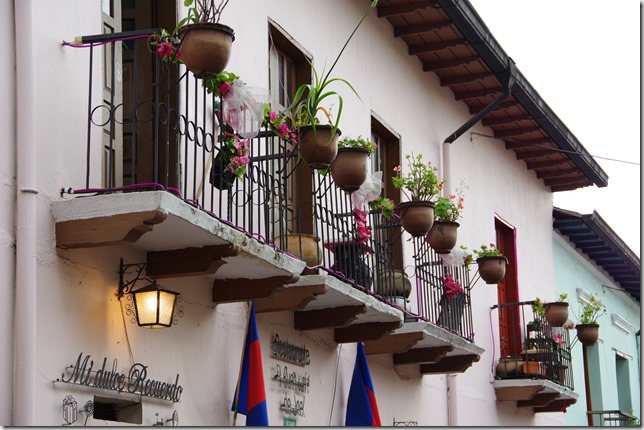 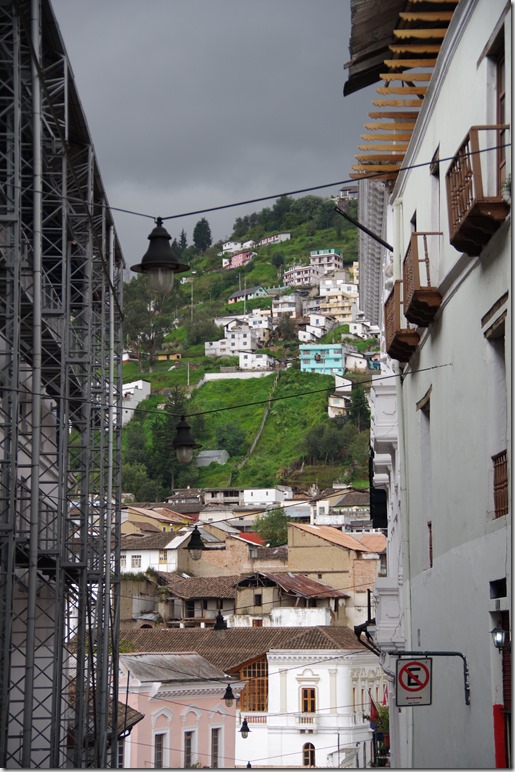 Looking up we discover there’s more to the city than just the sidewalks and shop fronts. 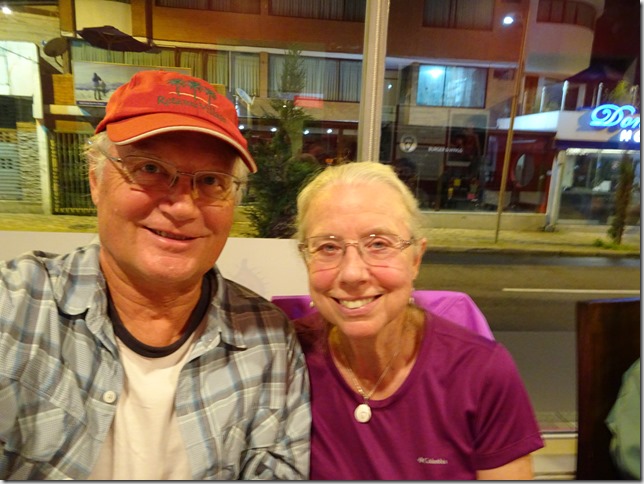