The following posts for our trip are being written and posted starting June 1, after our return to the US. As we wereer reminded by our tour guides a number of times during the trip, “You can rest when you return to the US.” Since I’ve now rested for two days, it is time to write about our trip says she who commands to me who obeys. Obedient Bob. 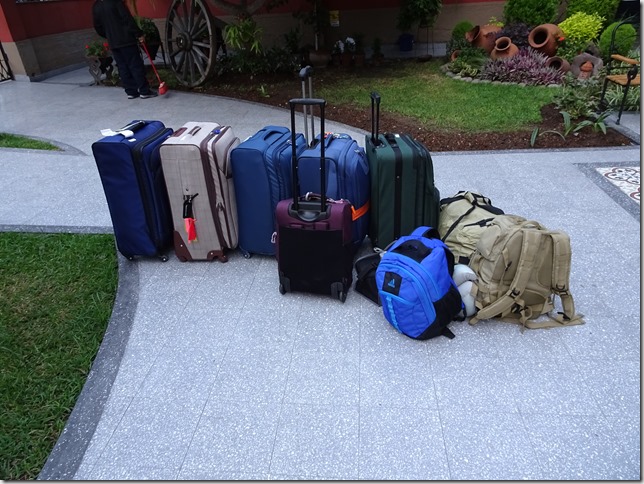 The first luggage photo. Linda’s maroon carry-on is front of our large blue bag. Guess which one which she had designated mine? Since she was the one who packed everything but the faucet from the kitchen sink, though I believe the kitchen sink may actually be in there, I would think she would be the one lugging that blue behemoth around instead of me. As big as it is, it is still smaller than the big bags of the other people on the tour. I guess I should be thankful for little things. 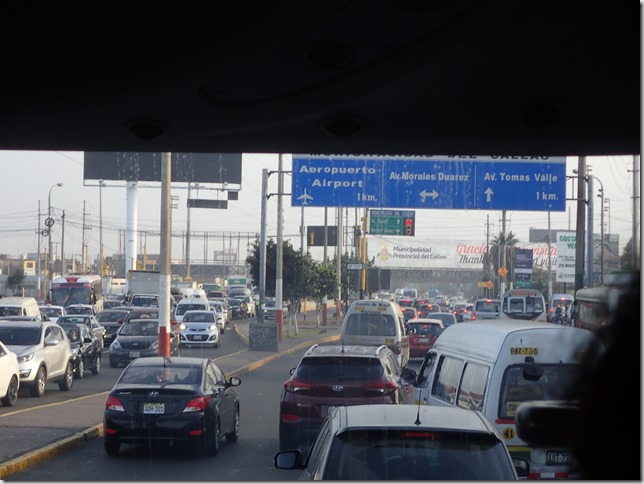 Today, or as would be better stated, early today, we fly to Cusco, and the start of our acclimation to altitude, especially for Linda. We haven’t been in Peru but for a short time, but I can assure you that I would never rent a car here. 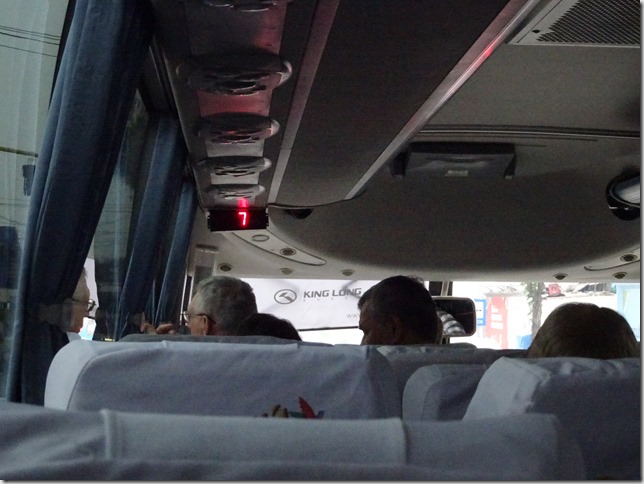 Stuck in traffic and with all navel lint contemplated, I searched for something to occupy my mind. That was when the red number grabbed my wondering attention. First time ever where the the speed of the bus was displayed for the passengers. It took a while but I finally took a photo that showed something other than zero. 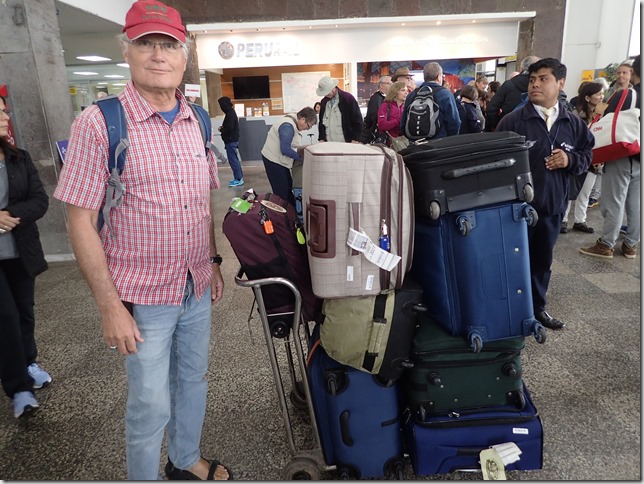 With only seven people on the pre-trip, the luggage all fits on one cart. 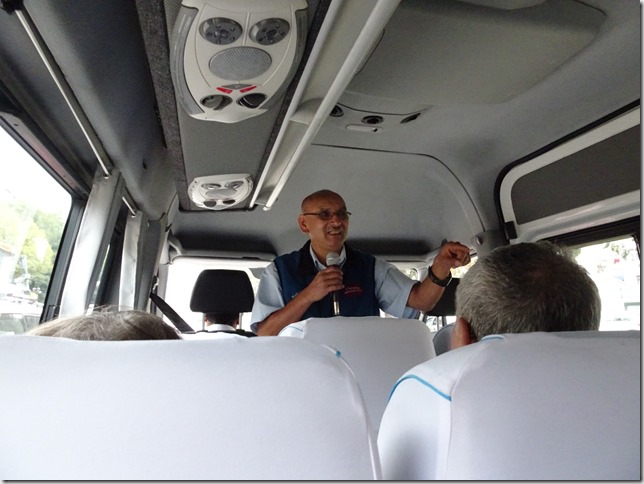 We would have three different guides during this trip, Edgar for the Machu Picchu area, Sophy for Ecuador, and Jessica for the Galapagos. Three guides with what turned out to be three totally different styles. There was the father figure, the fun loving girl and the energizer bunny. Each excellent in their own way. 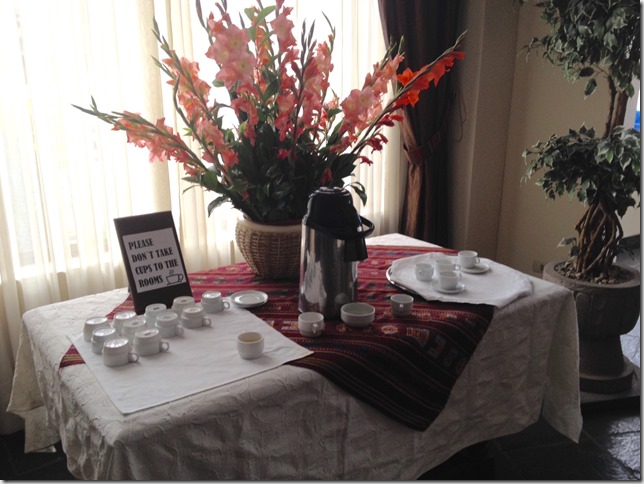 Cusco is at 11,157 feet, meaning altitude sickness is a fact of life for many visitors. Coca tea is available in the hotel lobby. You can buy coca candy, coca gum, coca energy bars, coca leaves and more everywhere. The people of Peru have used it for centuries, we were only there for a few days, but even with the brief time, it really does work. More on altitude sickness later. 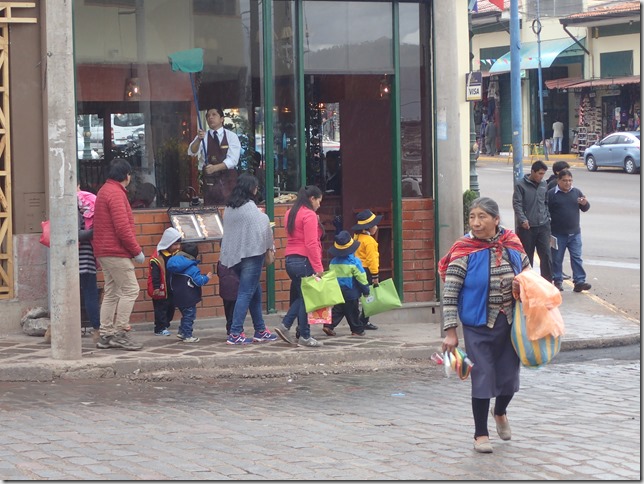 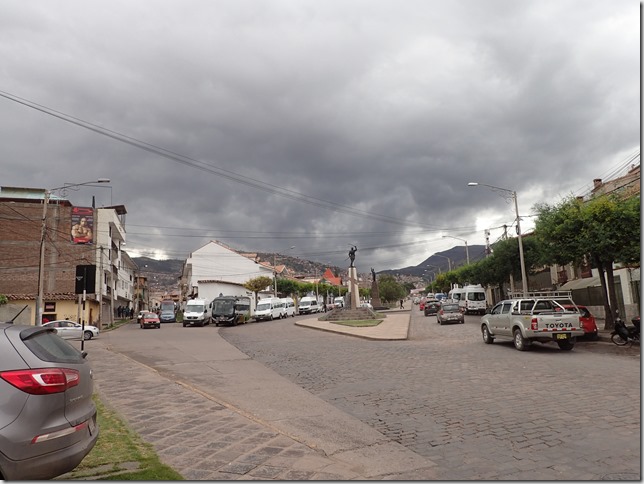 It didn’t take us long to realize why our guides were always admonishing us bring along our rain jackets whenever we were out. 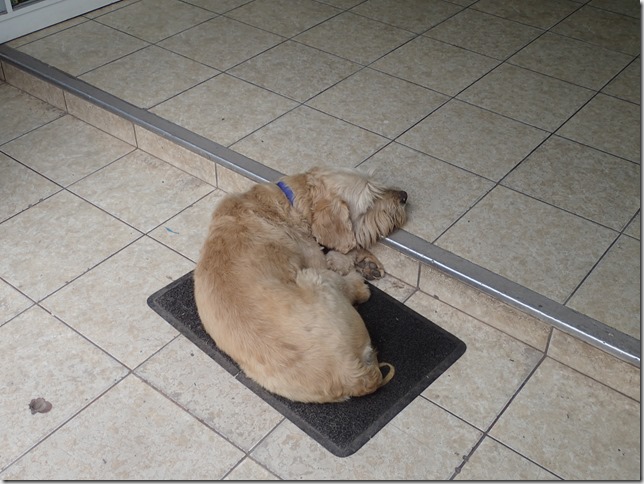 Why I always enjoy downloading Linda’s photos. I most likely stepped right over it, never even noticing it. As has been the case in our other travels, dogs roam free and are as friendly as can be. Assuming they aren’t taking a nap, of course. 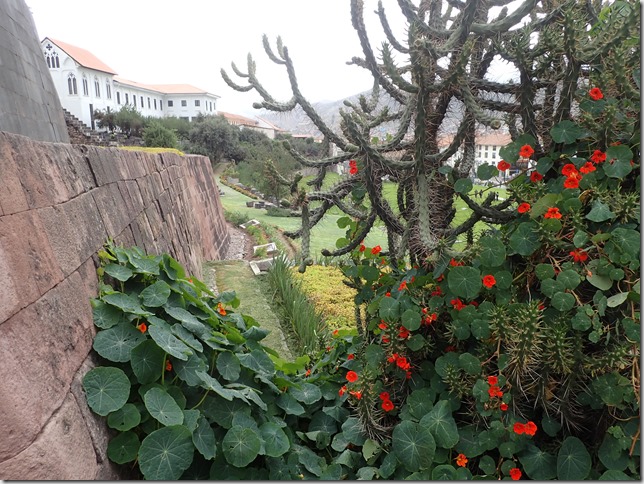 Inca wall that was part of of one of their temples. It and the temple have stood unfazed for many centuries. The church the Spanish built atop the Inca temple has been destroyed several times by earthquakes. Does it say something about the Spanish versus Inca building methods, or Inca versus Spanish gods? 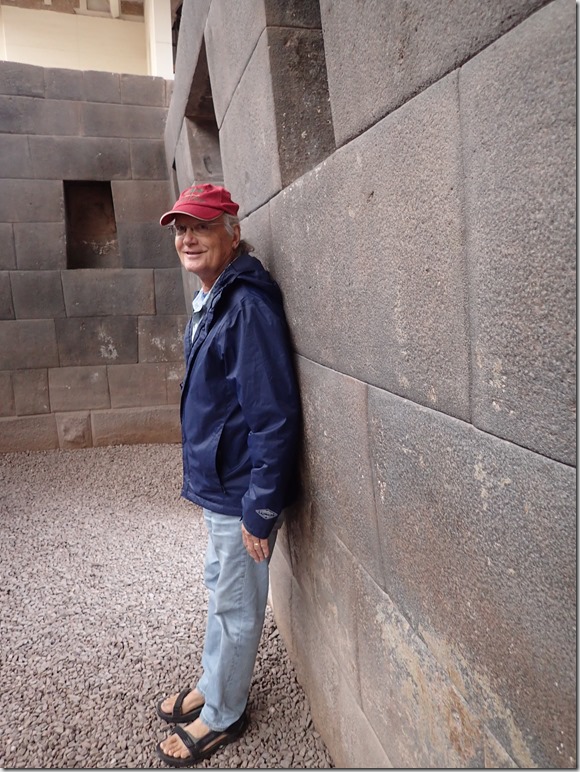 I’m standing upright, the temple wall is slanted. Those Incas were very intelligent people. You might also note they used no mortar in their construction. 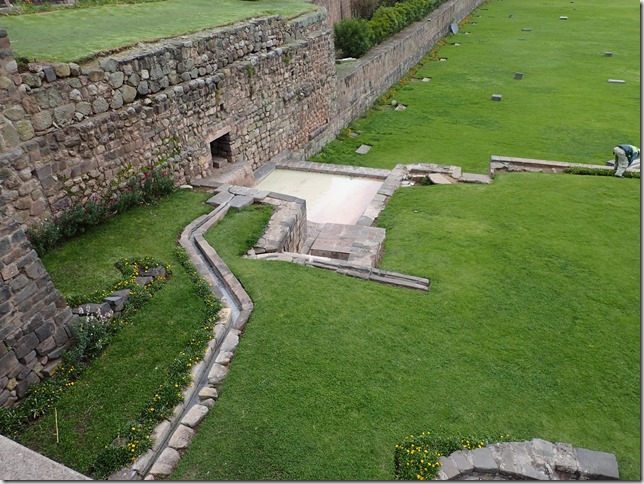 Easy to tell the original Inca stone work from the fall down and rebuild Spanish wall section. 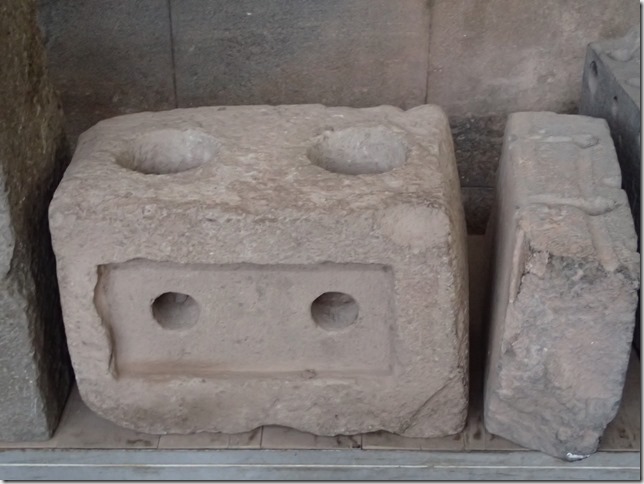 Inca stonework. You survive a earthquake by moving with it, not resisting it. 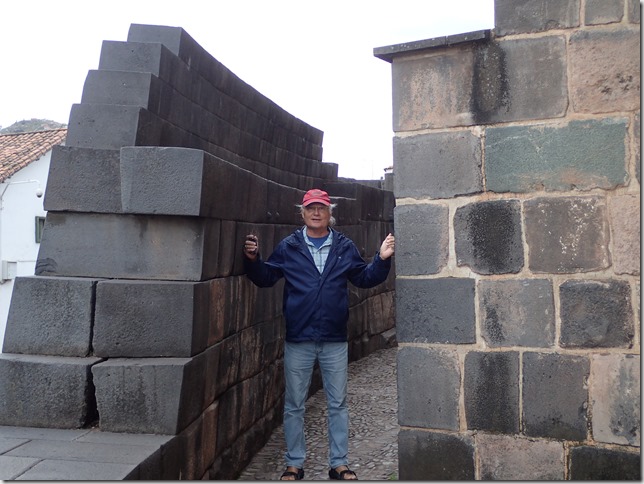 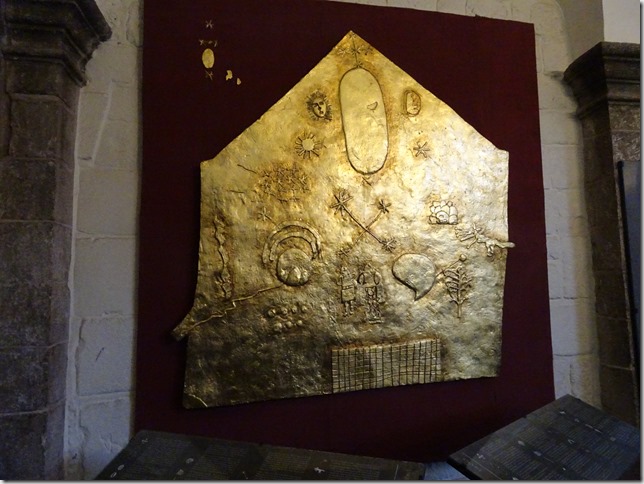 Gold had no monetary value to the Incas. It was used for decoration. Spanish greed stole virtually all of it. The Spanish Governor of the region wrote that God had monetarily rewarded his believers for bringing Christianity to the native people. Interesting that the Spanish stole all the gold and enslaved the native people in the name of the Catholic Church and King of Spain. Travel is more that just seeing, it also opens your mind. 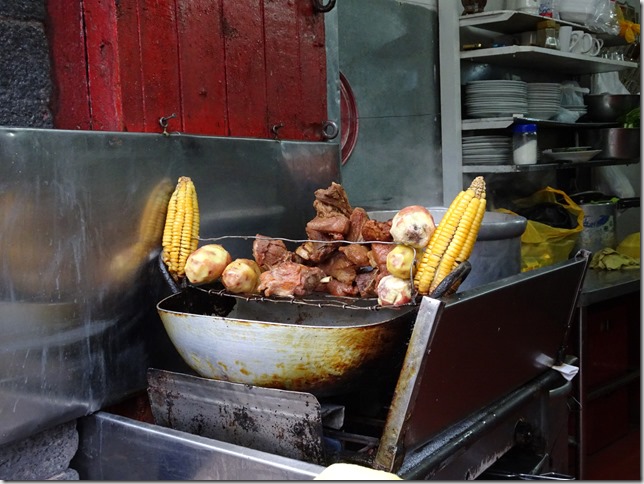 It seems everywhere you go there are tiny hole in the wall shops and places to buy food. This one has pork, potatoes and corn. I can tell it that it many not look perfect like our corn does, but it tastes a hundred times better. 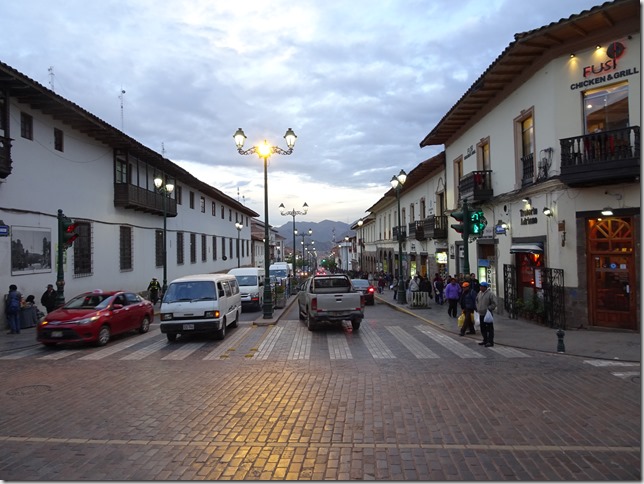 Near the equator it gets dark early as the days are the same length the year around. Also, when the sun gets lower in the sky, the temperature plummets at this altitude. It’s not what the thermometer says, it’s what you feel in your bones, and everyone was definitely feeling cold to the bone by this time. 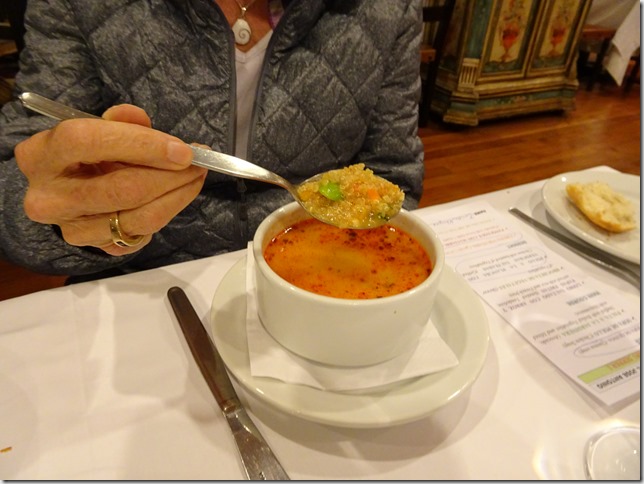 We were also learning that Quinoa is a very common ingredient in food. Since we often eat it at home, we really enjoyed it, though others on the tour who had never had it may have begged to differ about it. One interesting thing was we were warned not to eat red meat or drink alcohol because of the altitude. One person had both for dinner. Funny how they got sick during the night. 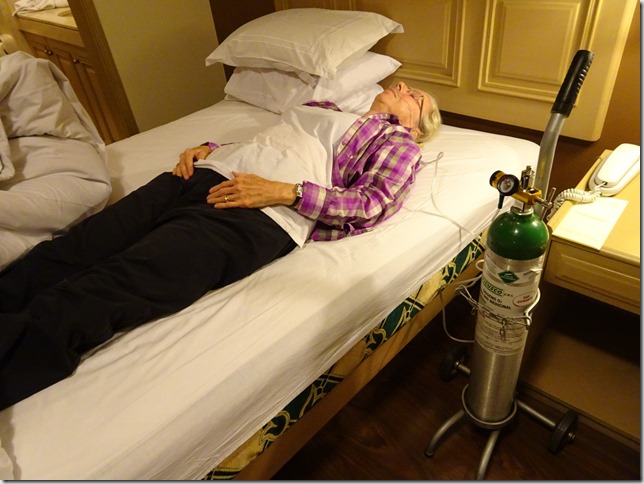 This WAS NOT the person who got sick in the night. The hotel provides free oxygen treatments for their guests and this is a person who took an oxygen treatment just before going to bed and sleep like a babe all night long. We took along a fingertip blood oxygen tester, and everyone had a great time checking their reading. Linda was at 83 before the treatment and after just a couple of minutes she was back up to 98. As for me, I had absolute no ill effects from the altitude. Linda says it isn’t fair. I just smile.
Posted by Bob and Linda at 2:48 PM