It was short night but knowing it takes two to tango but only blow from an enraged grizzly to end a life, I opted to be quiet as a church mouse and let the sleeping bear enjoy every minute of sleep it could. Smart Bob. 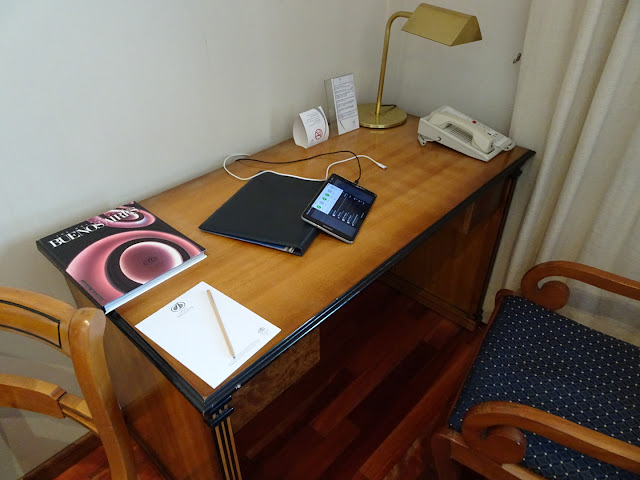 The Buenos Aires office where this blog is written and published, at least when you know who needs her sleep. Normally I would sit in bed and dictate the blog, but knowing just how miserable my Life would become if I did that and She was awakened because of it I sat at the desk and silently index finger typed. Very Smart Bob. 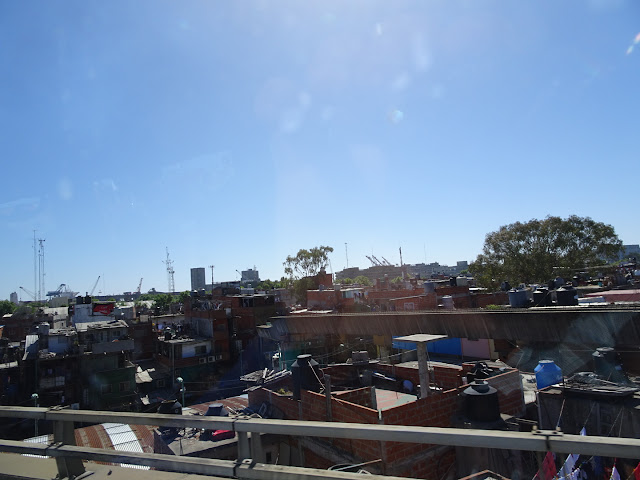 On the way to the airport passed by a slum that Annie said had popped up following one of the major financial crisises that seem to plague Argentina. Whenever one occurs more poor people from distant areas of the country move to Buenos Aires in search of a better life. To put another way, it is better to almost starve in Buenos Aires than to certainly starve where they were before with absolutely no chance of ever bettering their circumstances. As is the case everywhere, people want a better life for themselves and their children. There is little immigration from outside the country, though there were two great waves in the past. The fist was right at the turn of the 20th century, the second around the time and after the two world wars. Annie pointed out that Buenos Aires has the second largest Jewish community in the hemisphere, exceeded only by NYC. 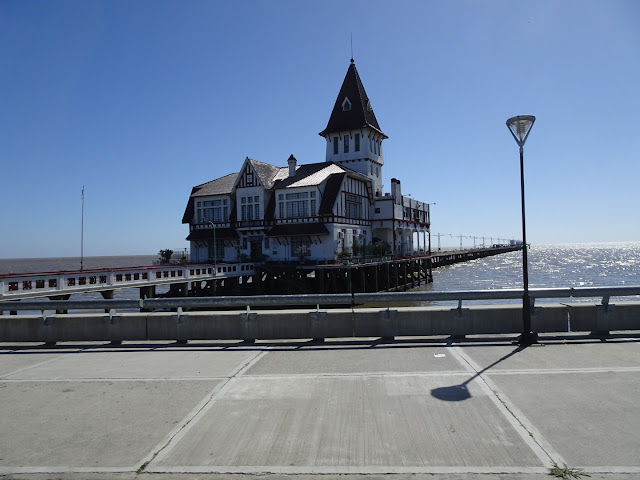 The airport we were flying out of, Buenos Aires has two major airports, is located right next to the Rio la Plata. Annie proudly informed tha it was in lyrics a 50 minute ferry ride across it at this point, but at its mouth it is 2000 km across. That one thing I will have to fact check as it seems to be more like a bay than a river from looking at the map. 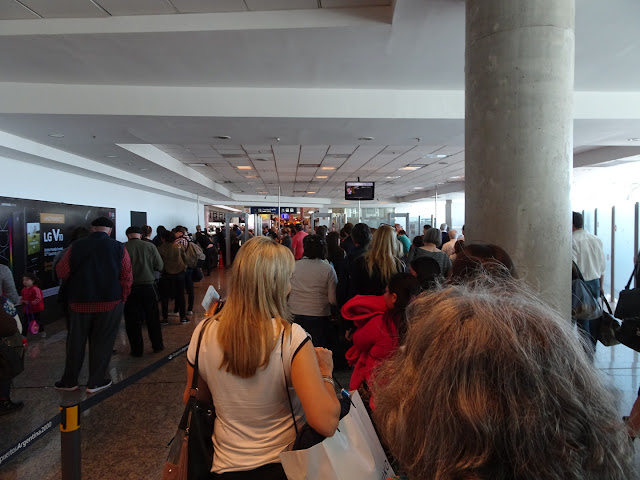 Lines are the norm here and one of them almost did Linda in. At the security checkpoint we had to take off our shoes. Not belts or watches, just shoes. A number of the stylish ladies were high heeled boots and it was fun wat hang them remove then replace them where there are no chairs or benches to sit in. But I digress, back to Linda and her problem,one that entailed a full three cavity search. Before you leap to the wrong conclusion, the three cavities were the three zippered areas in her daypack, the one that has everything but the kitchen sink in it.

Before we reached the scanner, she handed me her boarding pass so she could remove her shoes. I then handed it back to her, you can probably sense where this is going, after her daypack cleared the scanner they comm e need to search it, eventually leaving everything laying around it. They never did find anything which only served to further "aggravate" Linda. Stuffing everything back inside she walked over to the place where I was putting my shoes on. That was when the you know what hit the fan. I, in all innocence asked her where her boarding pass was. She spat back, "You have it." I could sense where this was going and it was a place I wanted to. There are too many things I want to do in Life to have it end today.

She quickly looked in the two lower sections then chased down Annie to tell her it must have gotten stuck in the scanner. Annie went to talk to the security personnel. When Linda came back we had a brief discussion, then she again checked the bottom two sections. I mentioned the top section and got the glare that meant she never ever puts it in that section, opened it. Her boarding pass was right on top, so I took off to let Annie know Linda had found it. Upon my return I asked Linda if all the excitement had made her slight headache she had, go away. I was informed that it was much worse. At that point I decided leaving her and her boarding pass alone was my best option. And I thought she would be excited to find it. Woe to Bob. 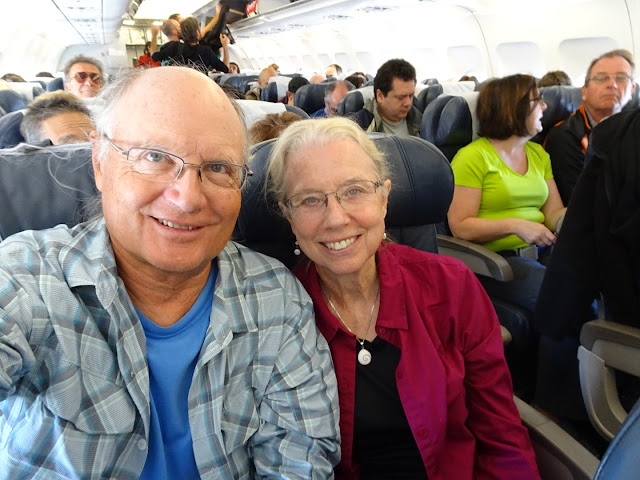 Just to show that happier times prevailed and we did make it on board the flight. 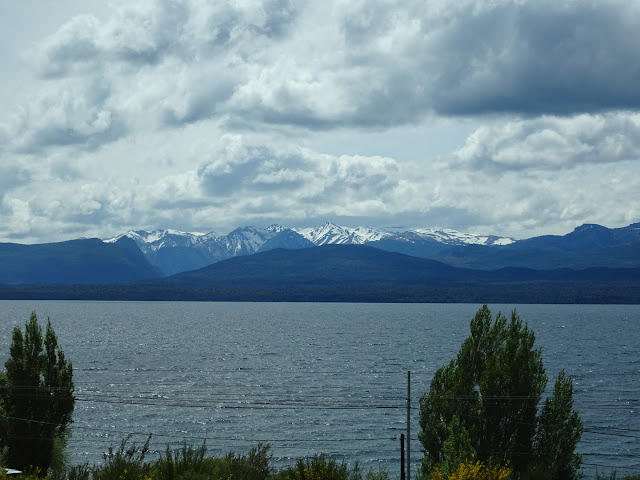 View out the bus window on the way to our hotel in Bariloche. We are definitely going to enjoy Patagonia. As Annie described it, Bariloche is the Gateway to Patagonia, a place where we can ease into the Patigonia experience before heading across the Andes and going further south. 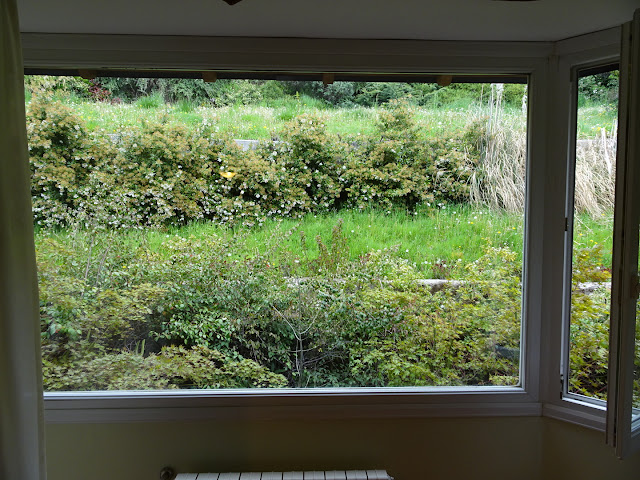 Our hotel is perched on the side of mountain overlooking the lake in the previous photo. You can guess on which side of the hotel all room is located. Sometimes you win the room lottery and sometimes you don't. 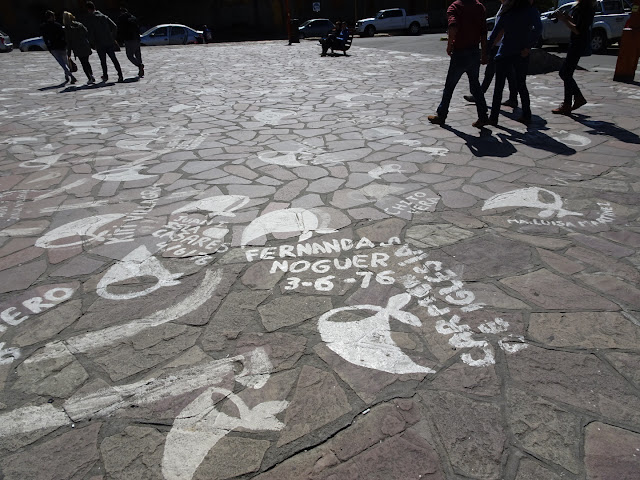 A terrible thing happened in the 1970s in Argentina. The military overthrew the government and soon thereafter began what is known as the disappeared. Young people, those primarily of college age, simply disappeared. No one knew what happened to them and no one dared ask unless they too become a disappeared. With the passage of time the truth began to come out. They were deemed a threat to the military government , so they were murdered and the bodies disposed of so that they could never be found. The total for the country is estimated to be approximately 30,000. The square in Bariloche is covered with painted on bandanas and names, some of which bare a date. These are the disappeared from this area and the date they disappeared. 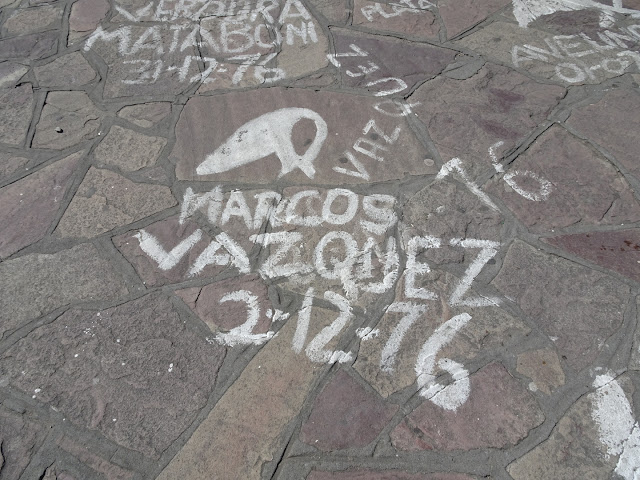 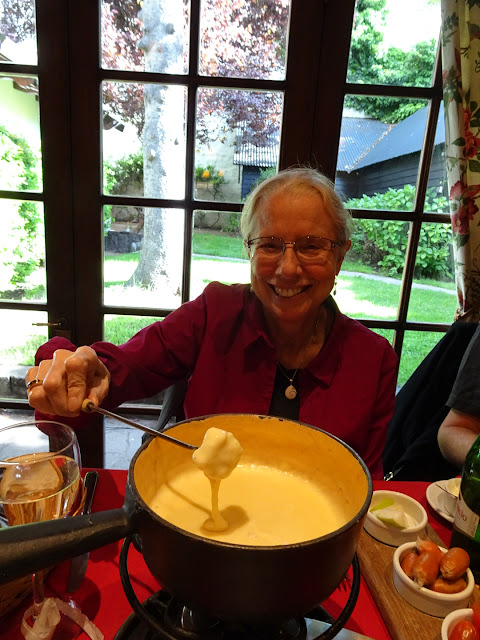 Emmentaler cheese fondue, only pan reside was left. This area was settled by Swiss immmigrants and hence is renowned for it fondue and chocolate. Linda sure lucked out when she married me. I wonder if she chose me because I was 50% Swiss rather than because I was both good looking and very smart, plus having excellent potential? Poor Bob. 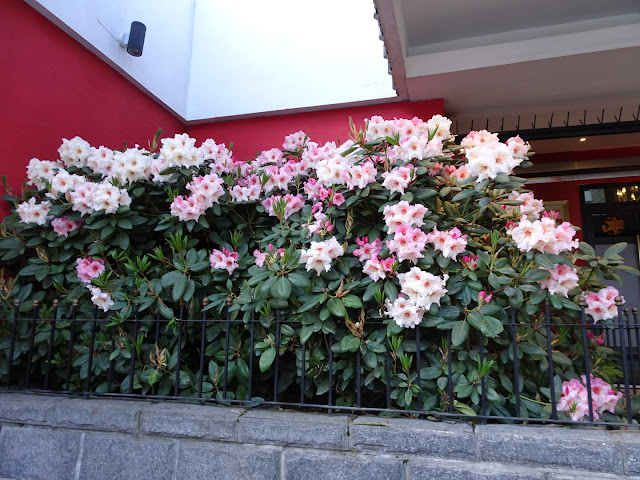 It is springtime in Patagonia. The rhododendrons are in full bloom. Along with all kinds of other plants and trees we can't identify. 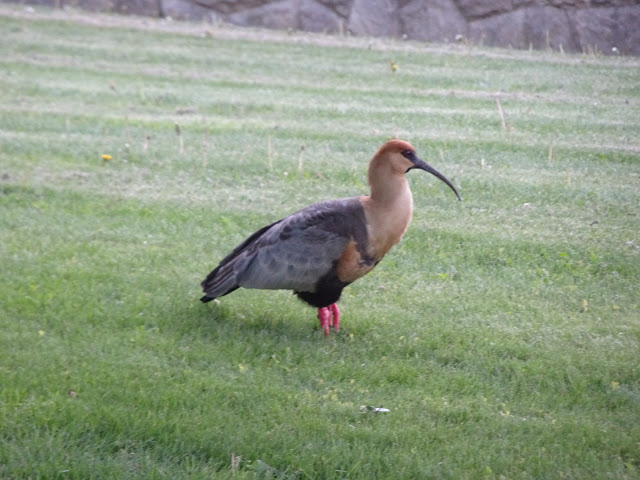 Also under heading of can't identify. There are english sparrows galore, but other than that we are totally lost when it comes to the birds. That's it for the day from a land of our dreams, Patagonia.
Posted by Bob and Linda at 8:16 PM