The title does a good job of summarizing the day, as it started early and ended after midnight. There were several breaks in the action and you can be assured the sweeter side of the family used those times to refresh herself while her mate enjoyed working on the blog. Well rested and read Linda. Blurry eyed Bob. 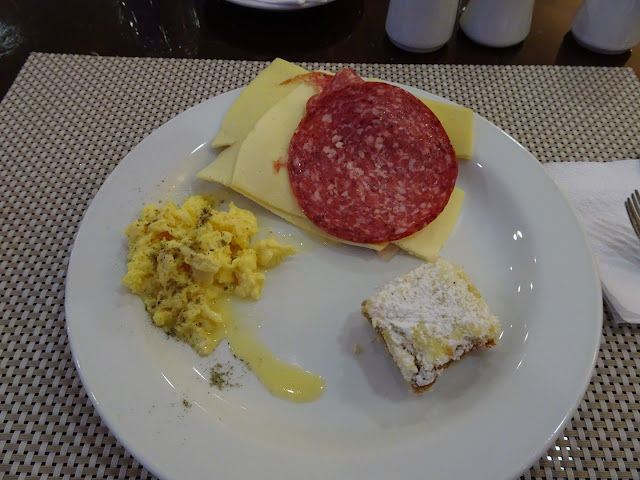 I was not a happy boy this morning when I dished out my scrambled eggs. Note the yellow line extending from those eggs. Did you know that the writer of this blog does not like soft runny scrambled eggs. And if you didn't, you do now. It's not that I won't eat them, but I really, really prefer them firm, as in very, very firm. I guess you could say I'm the Quigley of scrambled egg eaters. I wouldn't have eaten them but there were no tomatoes to place above and below my meat and cheese so I had to make do with what was available. Dieting Bob. 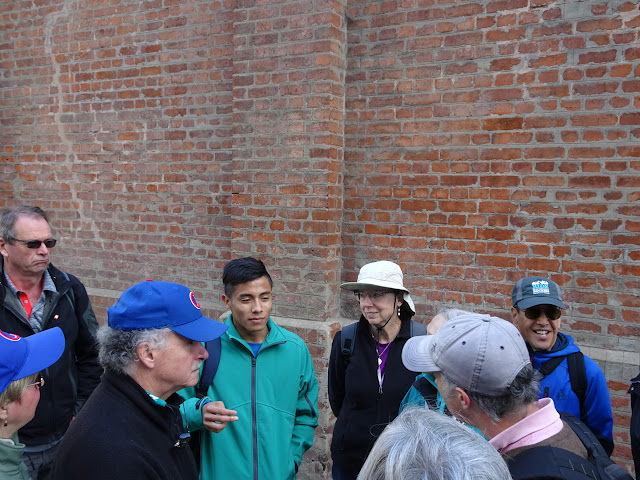 One of the things that makes travel so special. Our guide was giving us an orientation talk when this teenage boy joined the group. It turned out he was going to a private high school some distance outside the city. He welcomed the opportunity to practice his English, telling us about his schooling, his hopes of attending college, which is free in Argentina, then becoming a professional. I wasn't quite sure if he meant a doctor or some other profession, but with the attitude and personality he displayed he is sure to succeed. 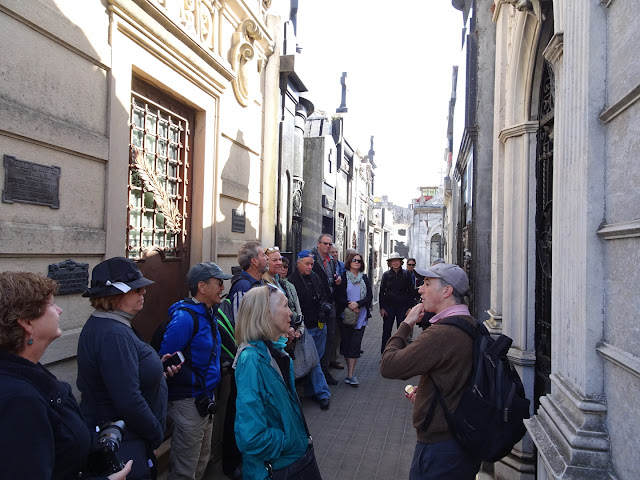 The one place everyone who visits Buenos Aires has on their must see list, the grave of Eva Peron. As is always the case, no person is either all good or all bad. So was it with Evita and to approximate how Bill so aptly put it, the good that (wo)men do lives after them while the evil is often interred with them. That however is not the way it is in Argentina with Eva. Good or bad, she continues to be a polarizing figure far larger than life, even many decades after her death in her early thirties. 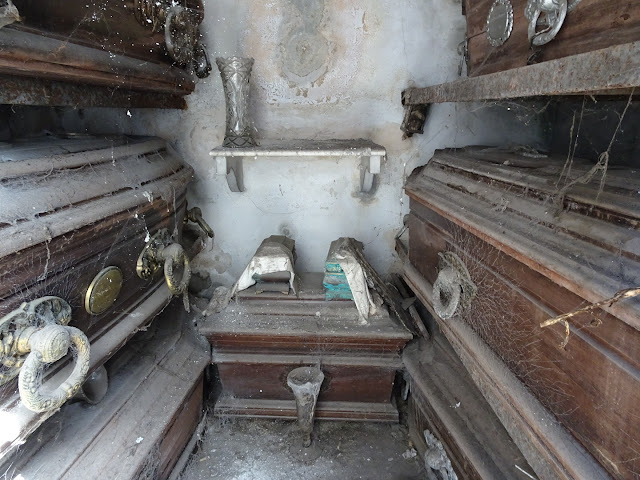 The interior of many of the crypts in the cemetery are visible through the ironwork decoration on their front. This one had coffins and urns for ashes. As long time readers know, Linda and I have a special attachment to cemeteries. While ranking cemeteries is not something we typically do, this one would have to be up there in our top five if we did. 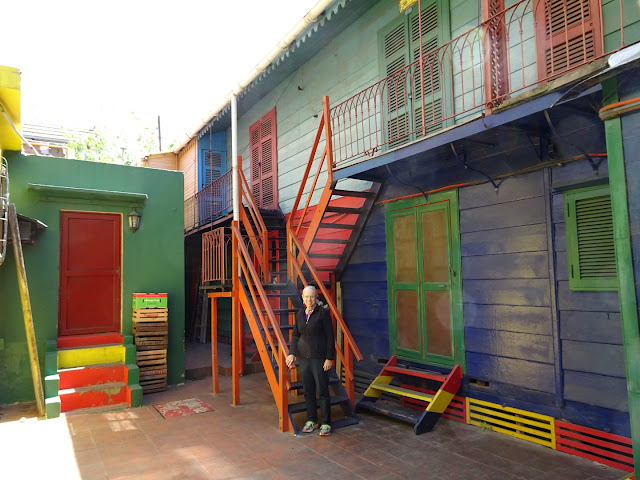 Another area of Buenos Aires we stopped at was called Caminito. It is an artists area that also has a lot of souvenir shops and other goodies that are sold to tourists. Linda and I looked at the area and thought it somewhat reminded us of Venice, so we started hunting for the little alley ways that lead off the business area back to where the residents live. As the photo shows we found one, and it was a special place. And no, we spent no pesos on any of the things that the shops were selling to all the tourists. With Patagonia coming up there's likely to be some more authentic things to buy. 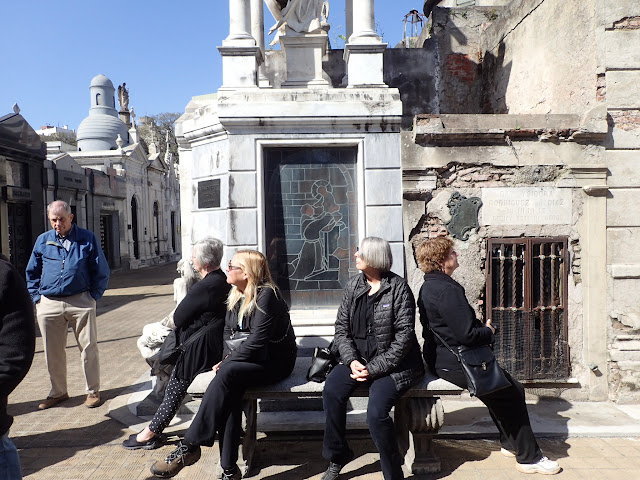 No, this is not the famous sculpture of the four angelical maidens. It it four ladies from our group resting their weary soles. Sorry Brenda, Debra, Judy and Abby, I just couldn't pass by this photo Linda took. So if you want to blame anyone, you better blame her. Blameless Bob. 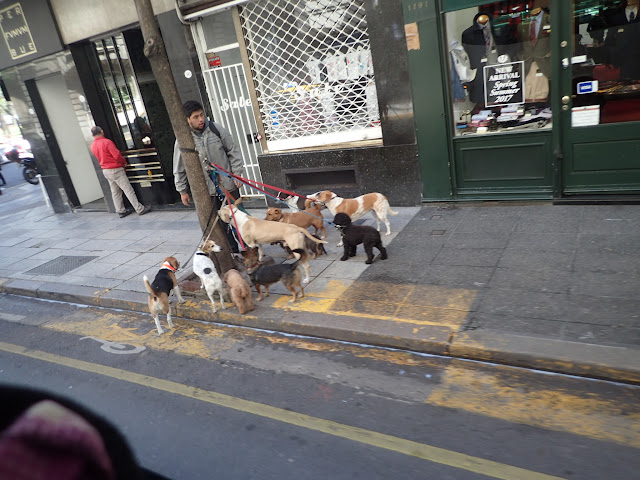 When there is only one tree in a number of blocks it can sure draw a crowd. 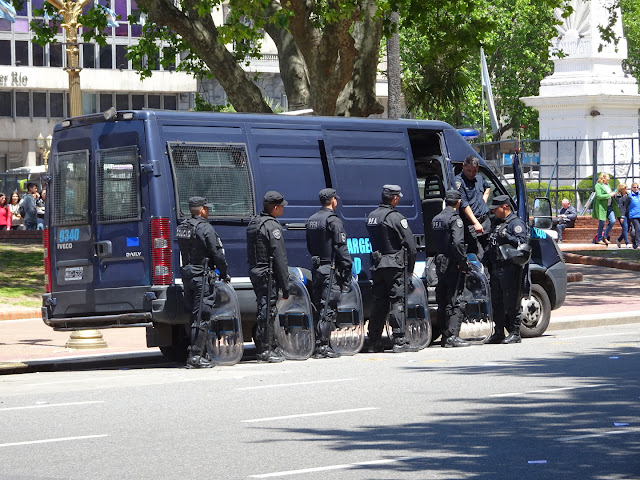 The police getting ready for a large demonstration put on by the bank employees. Annie explained that demonstrations occur every day in Buenos Aires and are just a normal part of life. Leading this quite large group of protesters were several men who constantly set off fireworks. It was so large it took a half an hour for it to pass by. It was being held to demand a 48% wage increase in the next year. Understand that the rate of inflation in Argentina is often between 45 and 50% per year and so their demand is not outrageous. 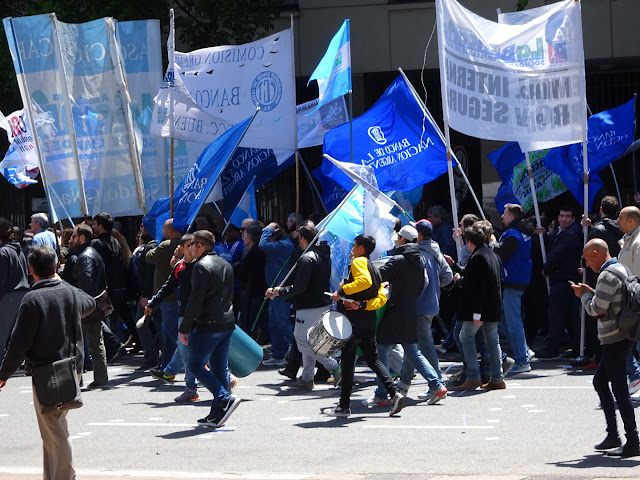 A tiny fraction of the demonstrators passing by. 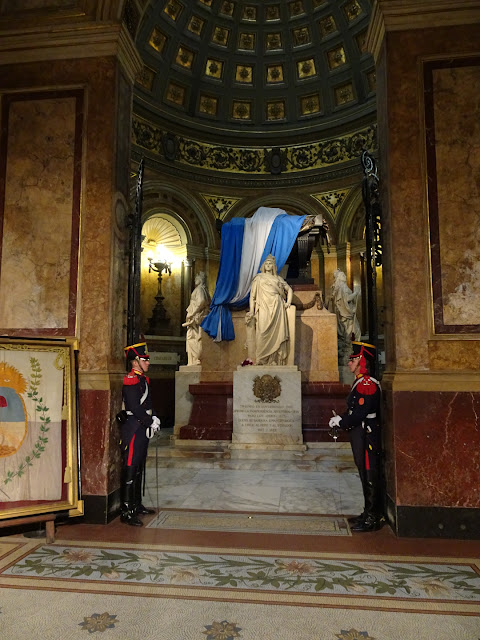 The Tomb of Jose de San Martin the man who fought against Spanish rule and was responsible for the liberation of Argentina, Chile and Peru. He is considered to be the Argentinian equivalent of George Washington. 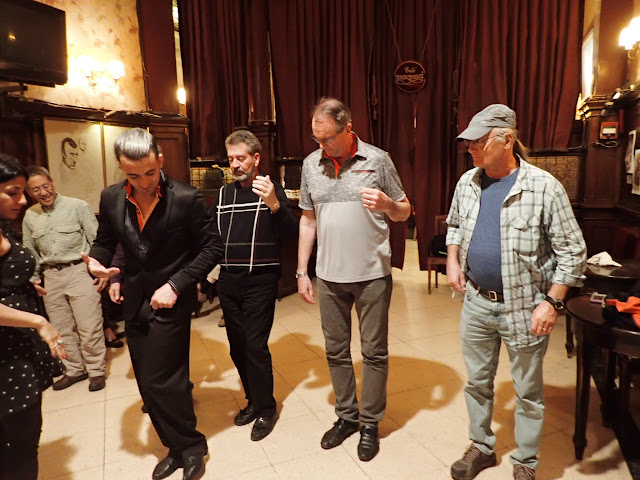 Some men are born to dance and others should never set foot on a dance floor. It is easy to tell the one who belonged in the latter category in our group. 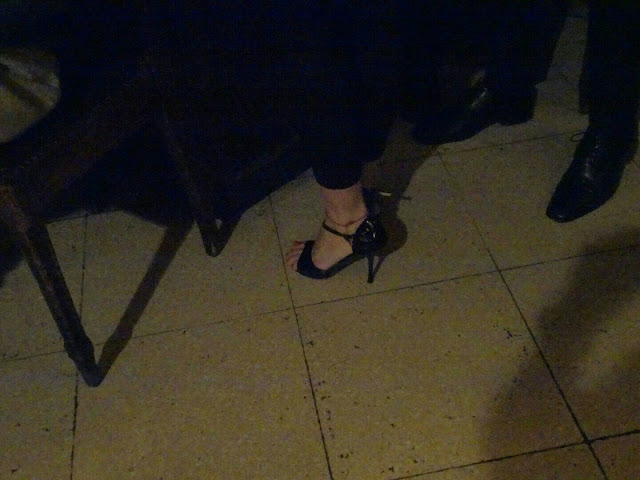 What this was all about was the fact that we had a one-hour tango dance lesson this afternoon. When it comes to dancing I don't have two left feet, rather as our good friend Mark once said, I have no sense of rhythm, meaning I have basically no feet. But speaking of feet, look at the shoes on the lady instructor. Those are the kind of shoes you wear when you Tango. 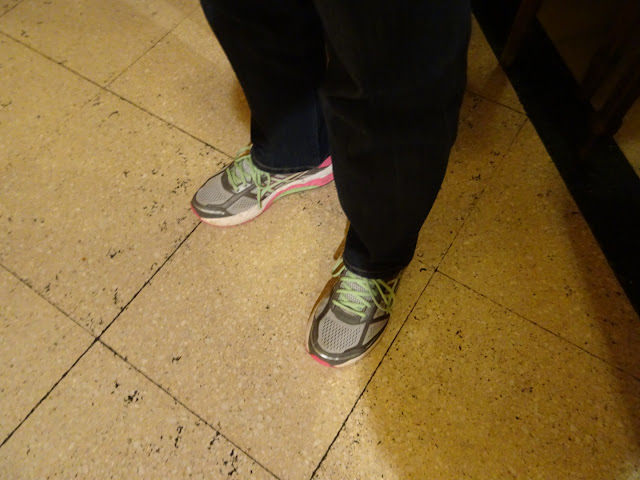 My dance partner's shoes. I'll let you draw your own conclusions about her. I have my own but if I was to express them I probably wouldn't be able to write anymore. On second thought let me express them: for some reason those shoes didn't belong on a dance floor, the reason being they always found themselves under my shoes. You'd think that after all these years Linda would know enough to get out of the way when I plod around the dance floor. After we finished our lesson and dancing I overheard someone say, "Bob said he'd never danced the Tango before, and after watching him, he still hasn't." At least Linda can still walk so it wasn't all that bad, at least I think it was. Bob, the dancing disaster. 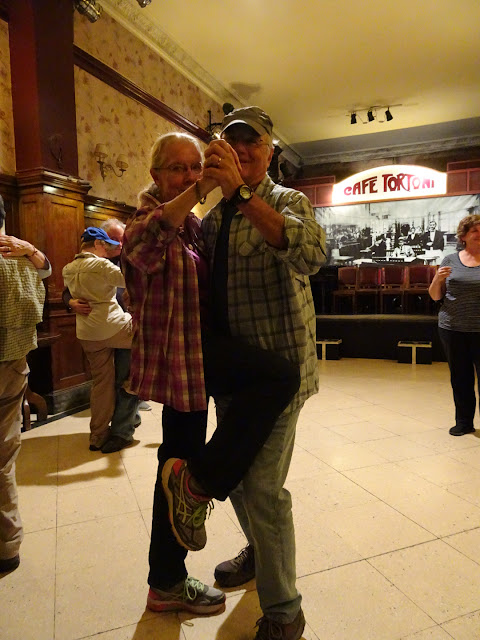 What can I say, I lied. Look at how Linda and I cut the rug out there on that dance floor, totally awesome. John Travolta eat your heart out. Dancing with the Stars, here I come. Flashing Feet Bob. 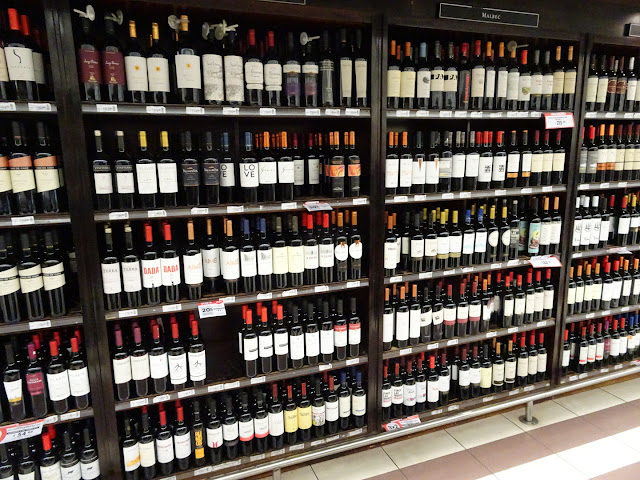 Wine may be the national drink in France but Argentina isn't far behind and in fact may actually be ahead. We are finding out that wine in restaurants is $5 a glass or ten to twelve dollars if you want a bottle. The other thing is that this section for Malbec was so big that I couldn't get back far enough to take a picture of it in this small supermarket. And my favorite wine is Malbec. Life is good. 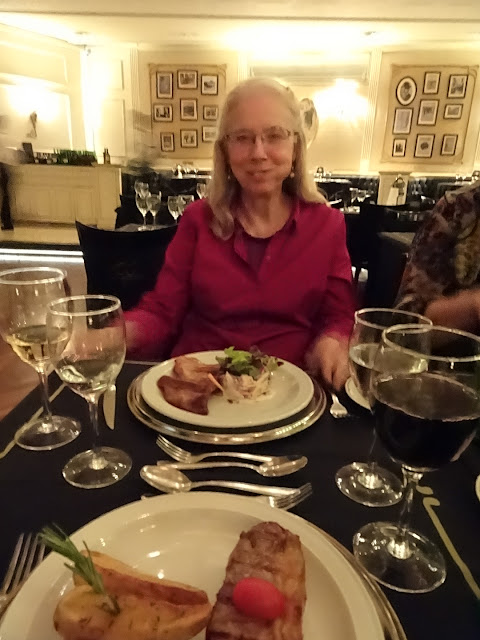 At nine o'clock we were seated in the Esquino Carlos Gardel for a meal followed by the Tango show. This was an optional tour that we chose to go on, in fact we're going on all the optional opportunities during the tour. We had front row center seats for both the meal and the show, you couldn't ask for anything better. The meal was excellent and we were anticipating the show remembering our tango lesson and figuring that they would probably have a few moves that we didn't. Dreamer Bob. 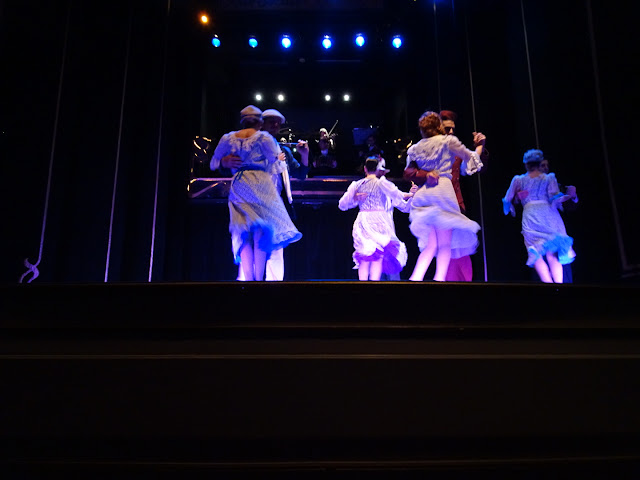 The show was very well done and at times you felt sad at other times you left and after each dance you clapped mightily. It was one of those things that we were really glad we did. It was shortly after midnight when we walked into our hotel room making for a very long day but one that was well worth it. Tomorrow morning we leave for Patagonia, stopping first in the Argentine Patagonia, where we will be for 3 nights. The internet is not the best in Patagonia and Annie said the further south we go the worse it gets. As before I will be writing every day but there may be a long period of L post but as soon as we get internet I'll be putting them up.
Posted by Bob and Linda at 7:14 AM