I think I've finally discovered how to use the bloggeroid app. If I have, then the photos should have the Bob commentary follow below each photo, just like in my regular blogging. Fingers Crossed Bob.

The blog posts for the days we were on Easter Island were posted last night. I didn't post them on facebook, though IFTTT or what ever it is called may have swept them in. That app is Linda's to deal with. I told her I'd work with it if she wrote the blog posts. The look she gave me needed no words attached to it for me shut my mouth and just write. Knows His Place Bob.

It was another very short night as we didn't get to sleep until midnight. The alarm went off at 5:45, bags outside the door and breakfast at 6:30, then off to the airport at 7:15. I made up for all my faux pas the past few days at breakfast. My sweet treat for breakfast was a small slice of pastry the center of which was filled with a brown filling. If you guessed chocolate, lots and lots of chocolate. You can probably appreciate the huge smile I got from Linda when I noticed she hadn't taken any and happily showed what I had. Very Good Bob. 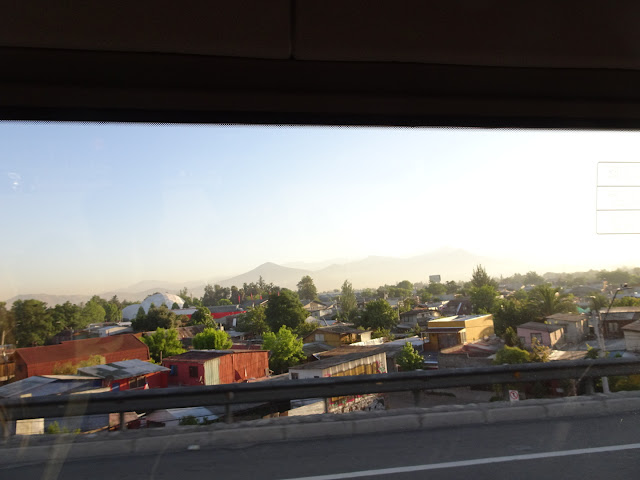 Santiago sits in a large valley with mountains rising up around it. Unfortunately the haze, smog or whatever it is obscures those mountains so photos don't do justice to the city. I'd say Santiago was okay but there is no reason for us spend time here again, one day (Saturday) being more than enough. For us most big cities, with our three exceptions, are all the same, besides, we took this trip to see Easter Island and patagonia so the cities are a necessary evil to accomplish that goal. I'll wait to pass judgement on Buenos Aires until after we've been there, but I'm not optimistic. 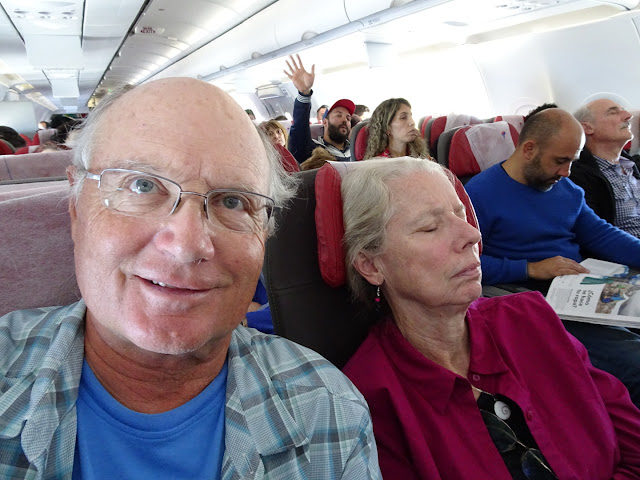 It is interesting that every flight we taken so far on this trip has been completely full. It used to be the period from Labor to mid November was a low travel time of the year. You can tell the seasoned travellers on the flight, they are the ones who know to use those hours to get caught up on the sleep they lost the night before. For me, I subscribe to the theory one can write now or one can write later but somewhere in the day you are going to have to find time to write. Weary Writer Bob. Wow, here's a great thought, with all rest Linda is getting during the flight she will be able to do all the navigating once we get to BA. Bad Bob. 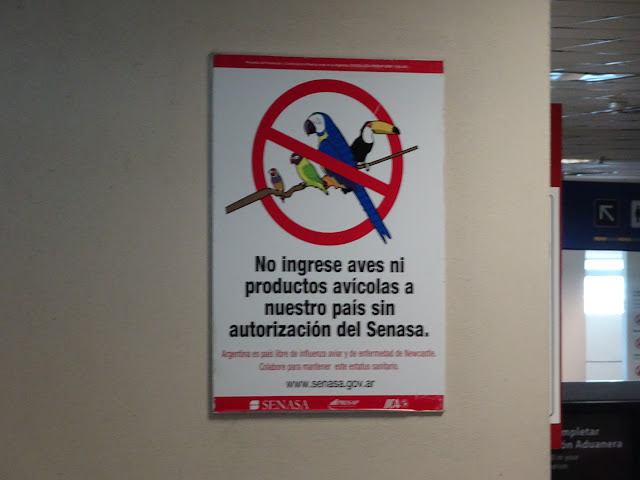 Sign in the baggage claim area at the Buenos Aires Airport. Each country has different concerns when it comes to what it will allow or not allow across its borders. Another interesting thing was that on each of the flights within South America there has been an announcement made during the flight that the crew would be spraying a non toxic chemicals that was not harmful to humans at the request of the regional government. Linda just looked it up on the internet and it says it is a insecticide to prevent the spread of of certain tropical diseases. Just what those diseases are we don't know, maybe Zika or ?. 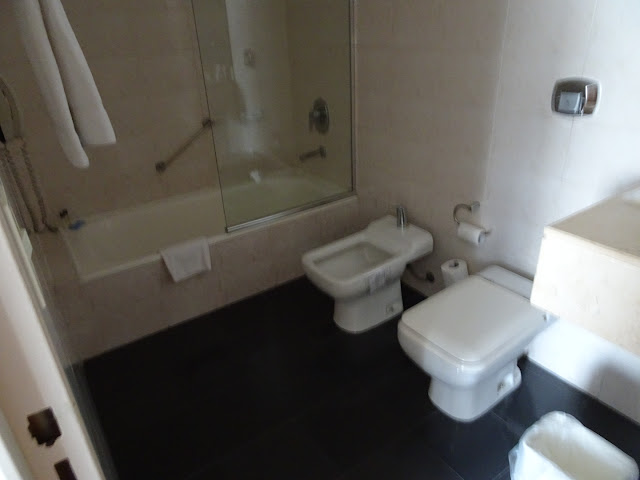 The hotel room we have in Buenos Aires is the nicest we've had since our room in Oslo back in February. This is also the first bidet we have seen in ages. Up to now we haven't had a dresser in any of our rooms, but this room has one with nine drawers. There is also a kitchen area that has a sink, a cooktop and a refrigerator. This may be a setup to show us how good we have it in the big city compared to Patagonia. 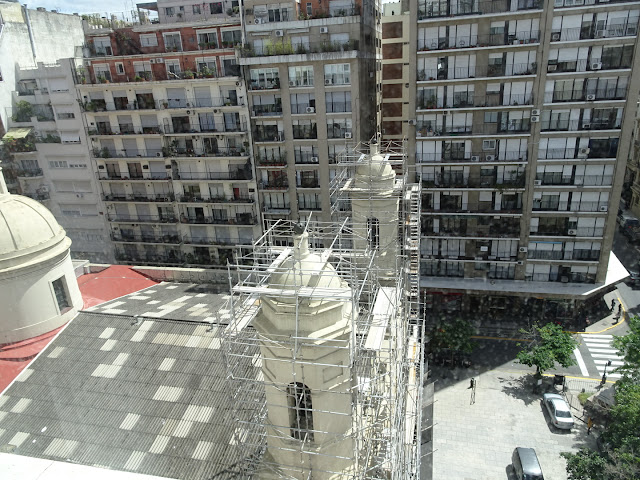 When checking in we were warned about the bells in the church near the hotel. The bells apparently ring every hour. If you're room is on the side away from the church you probably won't notice them. If you're room is close to the church you will probably notice them but quickly get used to them. Our room is right next to the church. Ding dong, ding dong, ding dong went the bell. At least we won't have to worry about suffering from bed sores because we slept in the same position all through the night. 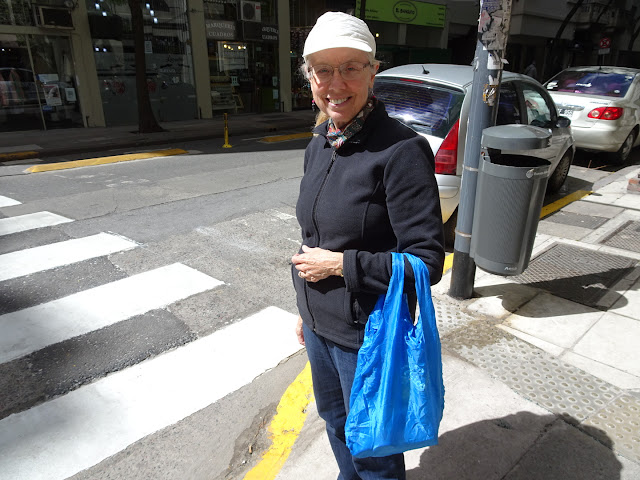 Hey beautiful young Argentinian girl returning from an afternoon shopping trip. With a group Bo on top for this evening we decided we would do our usual and have just a very light lunch of cheese, crackers, and ham from but nearby supermarket. We only try to eat one big meal a day when we travel which isn't going to be easy when we get the Patagonia as all three emails will be included for several of the days. Possibly Chubby Bob. 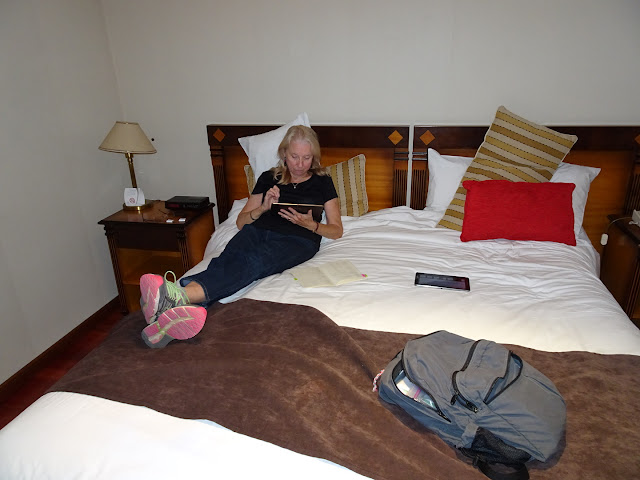 You can't say Linda doesn't know how to relax. Given the harrowing plane with the grizzly bear roaring away on board, it was no wonder she was tired. In Big Trouble Bob. 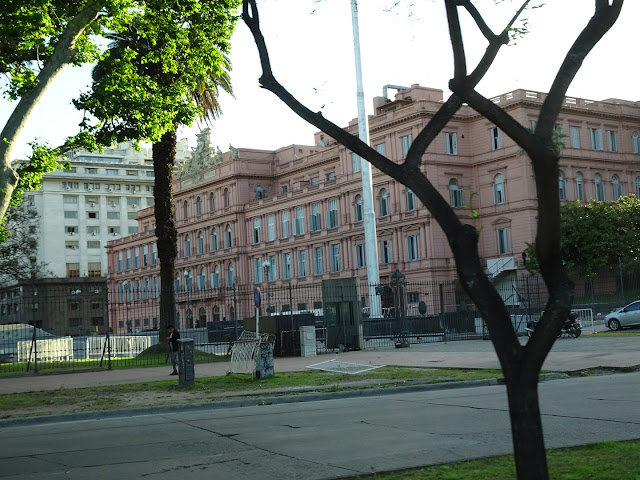 The U.S. may have the White House as the residence of the President, but Argentina adds some color to the pantheon of presidential residences with its Pink House. Listening g to Annie's comments about Argentinian politician I have to believe ours are outstanding compared to theirs. Isn't there a saying about how our form of government the worst there is except for all the others. 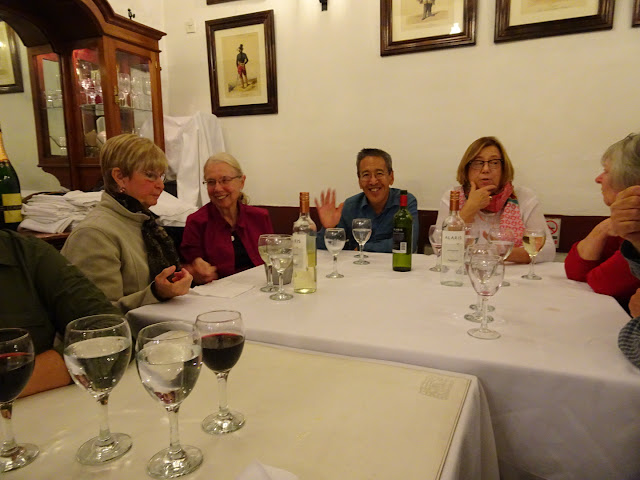 The evening group meal. Contrary to what the photo shows, food was served. Or I think it was. Now comes the real test. Does the blog post with the writing mixed with the photos or did Bob not know what he was doing as usual. For what it is worth, my money is on Bob.
Posted by Bob and Linda at 7:41 PM