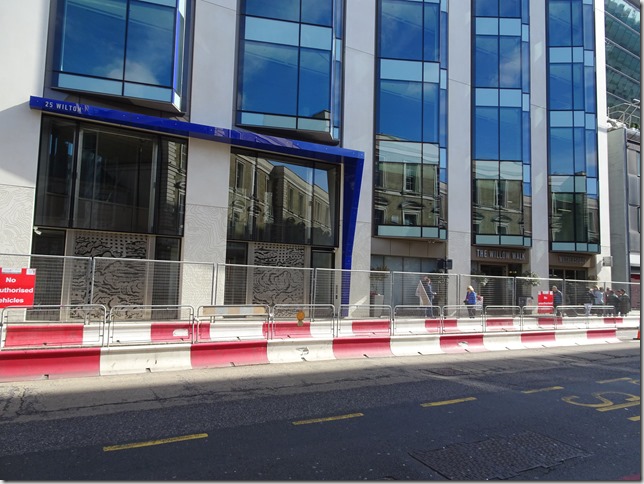 I don’t know what or where it is either. This morning we took the tube to Victoria Station, then walked over to Victoria Coach Station to get our tickets for Tuesday’s trip to Portsmouth. Problem was we came out of Victoria Station through an exit that wasn’t there the last time we were in London. It was on the back side of the station, not in the station and Linda’s London guide got completely turned around. I just took the above photo to show where we had been. All I can say is she was very nice as I untangled myself from the mess, mostly by wandering around. Once I hit a landmark I knew, we were off on a beeline to the coach station. Blundering Bob. 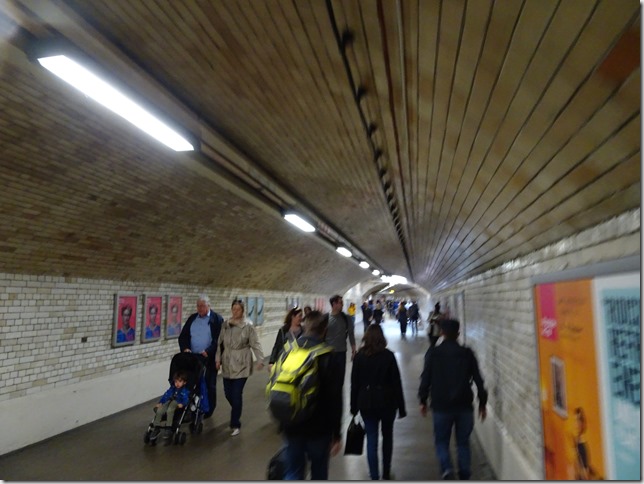 The tunnel from South Kensington station to the museums. Today was our Victoria and Albert Museum Day. It’s another of those places we see every time we are in London. The tunnel is the best way to get there as you go in the small side entrance instead of the one at the front of the museum. In this case the station entrance to the tunnel and the entrance to the V&A were where I expected them to be.

What follows are a series of photos from inside the V&A of the things we like and a few succinct comments about them. 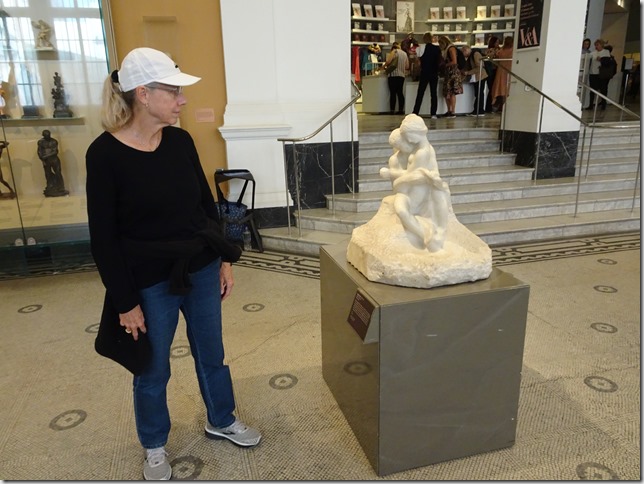 One of Linda’s favorite exhibit areas of the museum, sculptures. She’s not big on paintings, but that woman does enjoy sculptures. 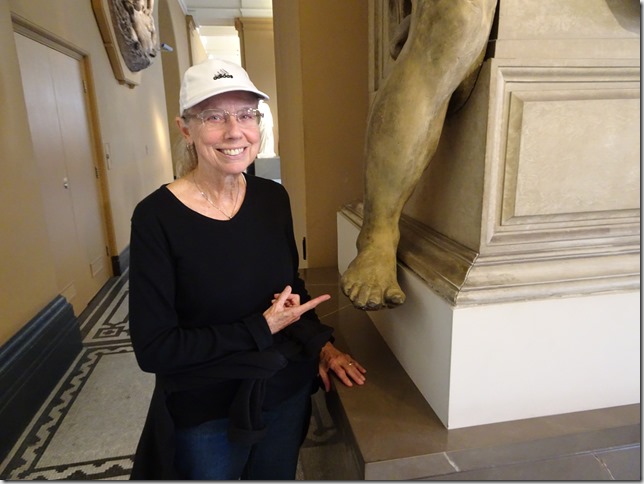 Her favorite part of any sculpture. They have a life size copy of Michelangelo's “David”, and you what she looks at on it?, Not what everyone else is looking at, she’s looking at his feet. Thank goodness I have fairly big feet. Otherwise she would have likely tossed me back. 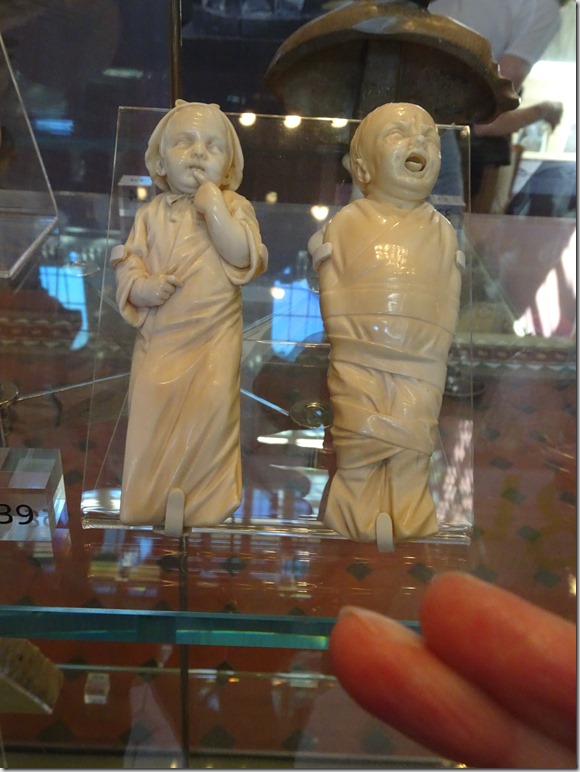 Linda’s fingers showing the size of two small carved ivory infants. We had twins. Our were exactly like these two. Meg was quiet and easy to take care of. Rich bellowed and thrashed about most of the time I’m sure there were times she would have liked to tie Rich down like this little guy is. Memories are everywhere. 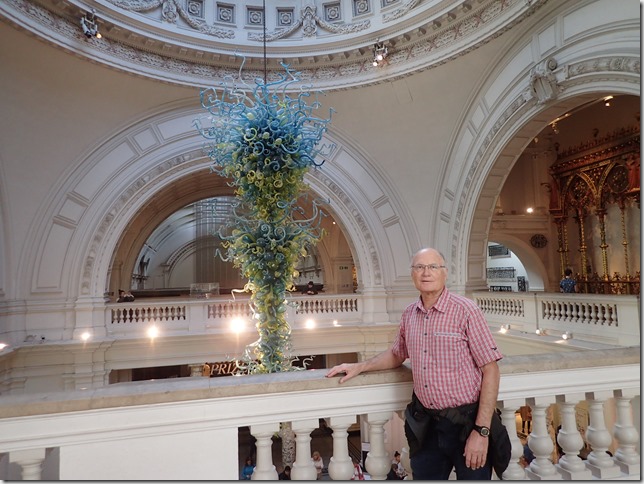 Stop! I want to take your picture. So I stop. It was on the opposite side. The lighting wasn’t right. I take the camera and walk over here, motion her come over, which she does with that look that says, If I’m coming over there for nothing, you’re going to regret it. I’m the photo guy, not her. She’s the model, not me. She took it, I’ll post it. Good Bob. 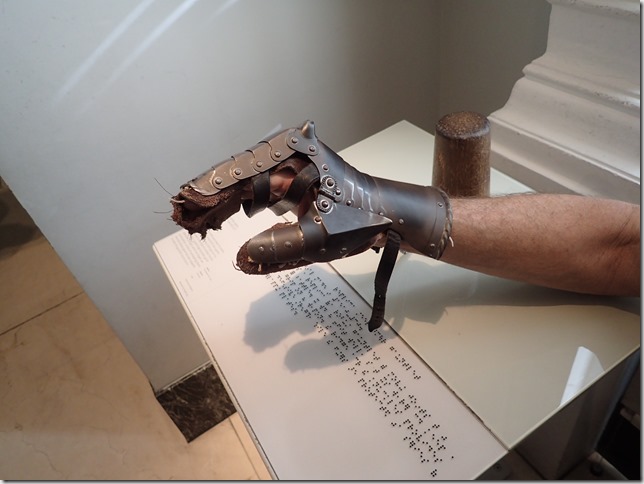 I’m more than willing to bet the last time we were in the museum she took the exact same phot and I posted it. Unfortunately there aren’t enough hours in the day to do everything and scan our past posts to see if I’m right. As you might guess from the spelling and other errors that show up in these posts, I don’t have time to make many corrections in what I wright either. Oh, what I have on my hand is called a gauntlet mitten, designed do the wearer could easily hold a weapon in his hand., yet be well protected. 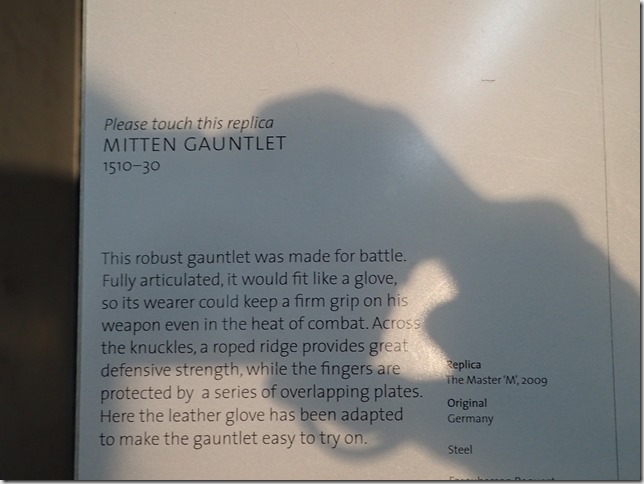 Card about the gauntlet. Photo by Linda. I don’t have a clue what the shadow is. Maybe a ghost? 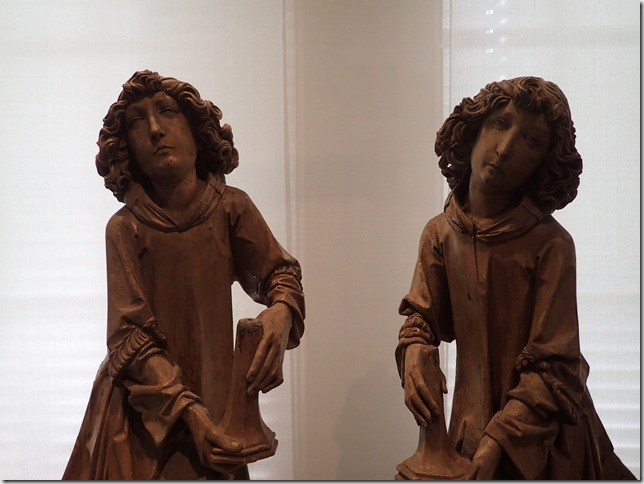 We both knew what it was as we walked up to it. He’s part of the reason we are spending time in Germany in a few weeks., Tilman Riemenschneider, the wood carver extraordinaire. 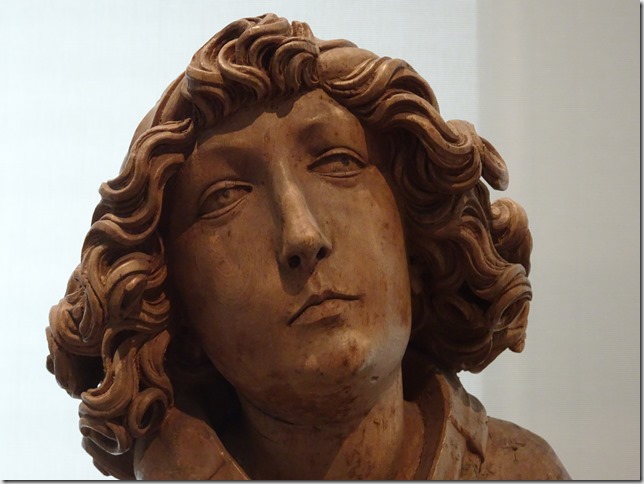 The face of an Angel. 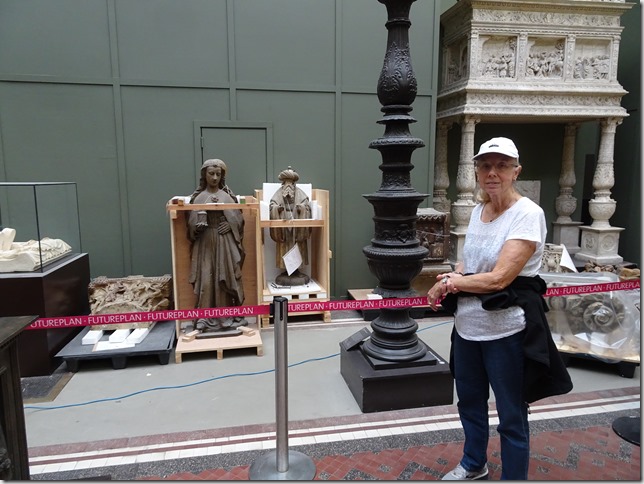 Linda's other favorite place in the museum, The Cast Courts. In the mid 1800’s the museum sent teams out to make casts of many of the worlds great objects.. You can see several of the casts being prepared for exhibit in the background. 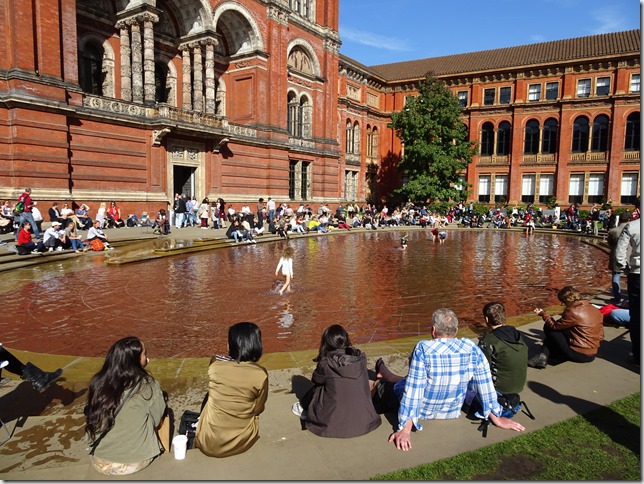 It was fun time for some of the youngsters in the museum garden pool. 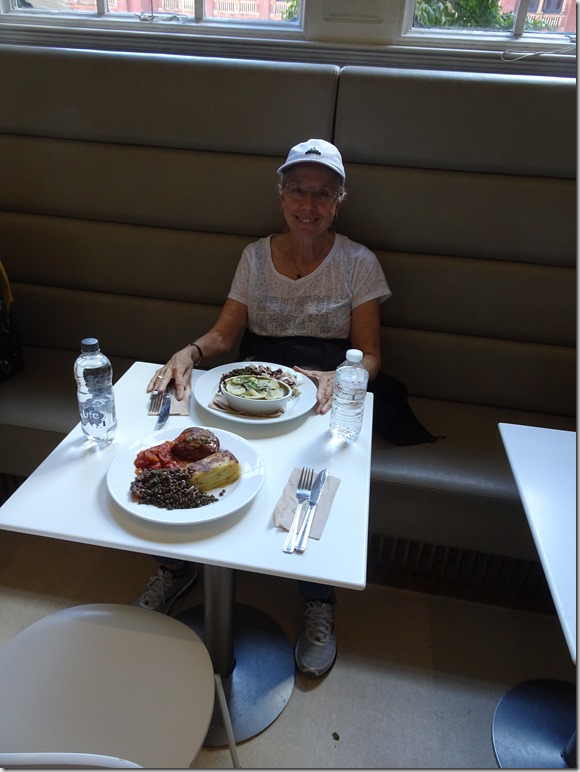 Another thing we always, and I mean always, do when we visit the museum. Eat a meal. The food is beyond awesome. Linda had a vegetable casserole and I had Ethiopian Lamb shoulder plus our sides. Truthfully, we could eat every meal here it is that good. Just another reason to return to  in the future. 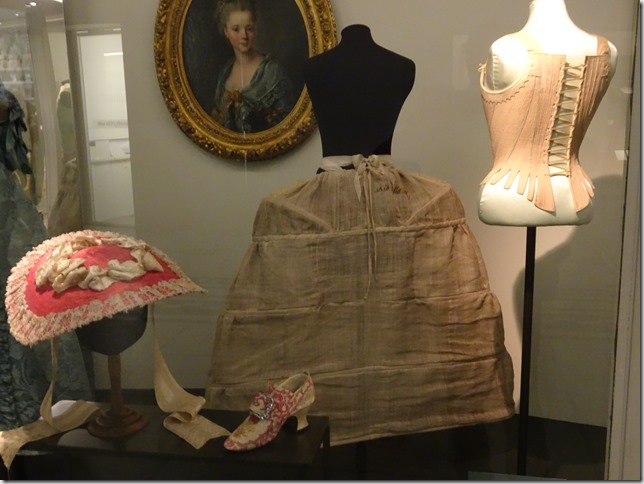 The ladies of the Royal court wore their dress over this form, turning sideways to get through doorways. Then there was the corset they also had to wear. They say fashions come and go, let’s hope this one never comes back. 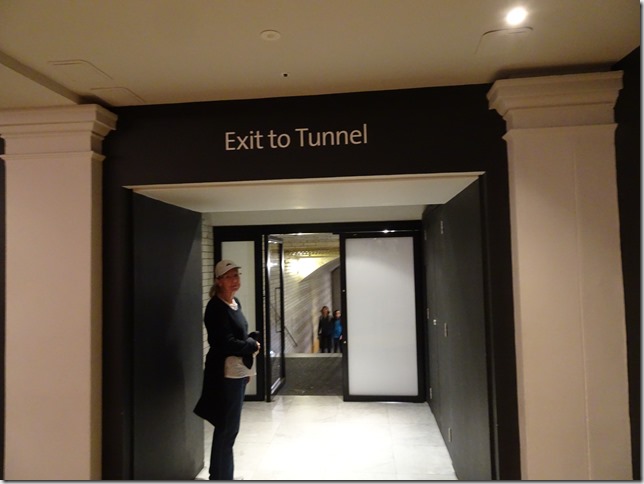 Just to prove there really is a tunnel entrance. 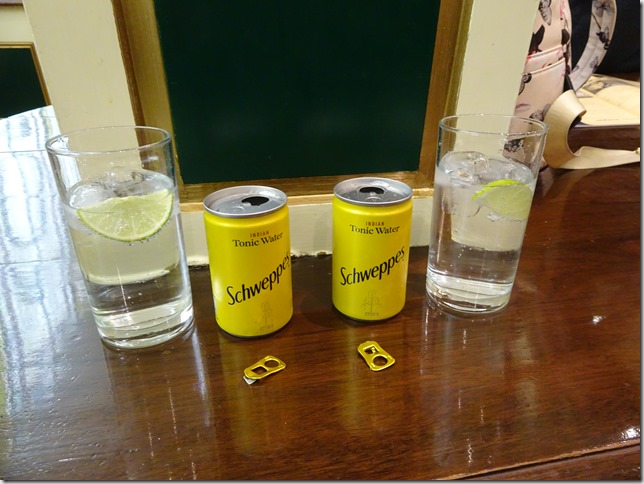 By now readers should know that a photo like this means only one thing. Another visit to the theater. And you know it is our G&T’s because you can see the tab tops Linda has already pulled. These were really hard to get off, but a strong healthy girl like my wife got hers off before her old decrepit husband got his off. Impressed Bob. 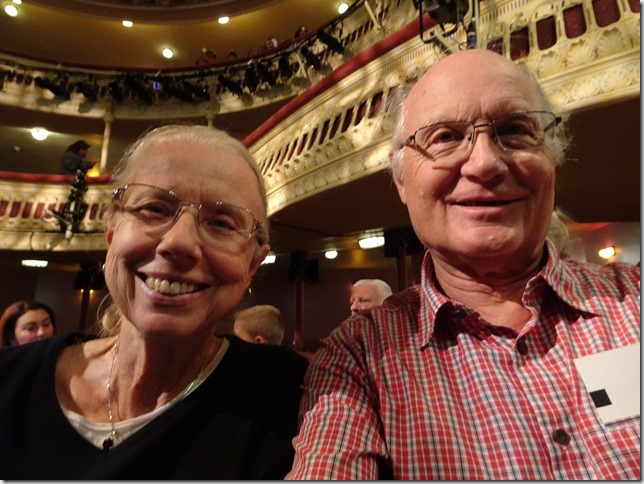 Theater selfie. We’ve seen other plays at this theater over the years, and it is the one right on Piccadilly Circus where you have to go down three levels to get to the stalls.  Once again great seats 5 rows back. 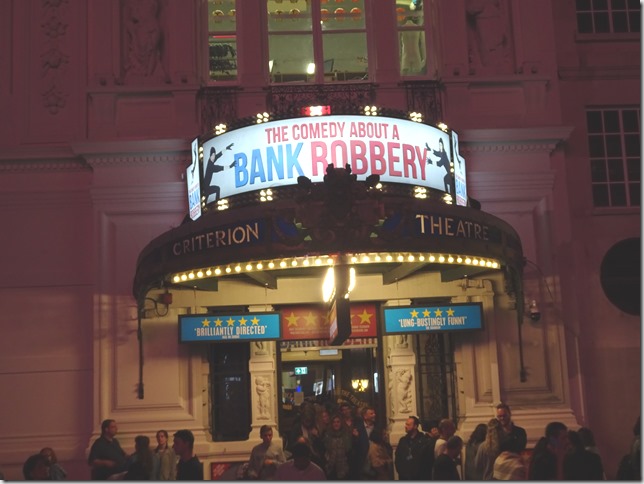 This was the play, and a comedy it was. It’s by the same group that wrote The Play That Goes Wrong. There was a take on the Abbott and Costello Who’s on First, that was really hilarious. It was as if they took the best from some old  and newer movies, adapted to the premise of the Bank Robbery,  and took it from there. It was a great time and the laughs from the audience attested to that, Linda and myself included. 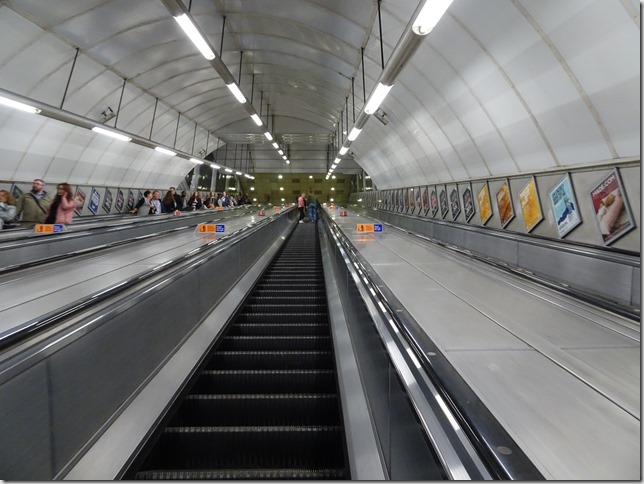 10:20 pm on the up escalators at Holborn station. Everyone is on the down escalators coming from the nearby theaters. Tomorrow we have a few things different planned, if things go according to plan.