Today is the first full day of our short post trip to Nicaragua. If I left the impression in yesterday’s post that it is not safe to be here, it wasn’t my intention, and we are really looking forward to our time here. 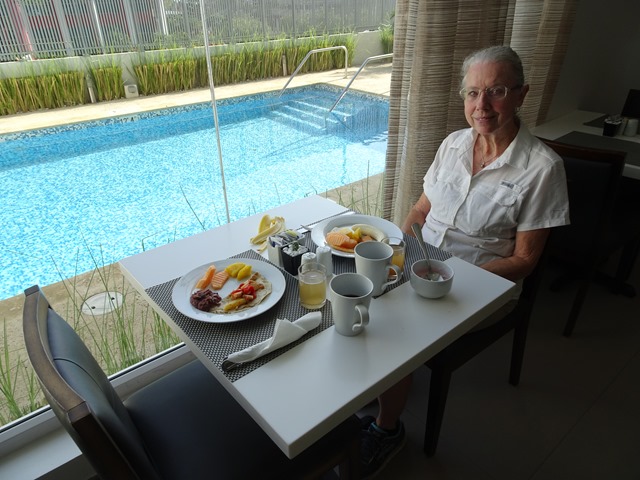 A little different breakfast than what we have been getting, at lest for me. Linda went with her tried and true fruit plate and bowl of cereal with yogurt. Mine was little more Nicaraguan. Liked the Tamarind juice, plus the coffee was in the Nicaraguan style. Folgers drinkers need not apply, at least if you didn’t want some serious hair growing on your chest. Mighty strong, mighty good, arguably the best coffee of the trip. 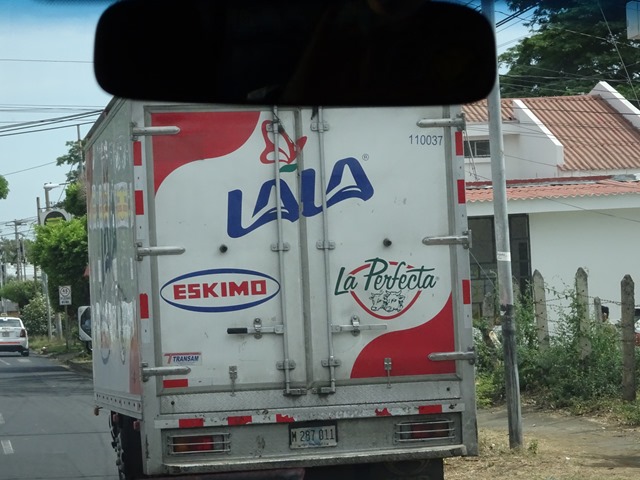 It was requested by my other half that I take this photo, which is code for “put it in the blog.” LALA is the brand of sour cream among other dairy products we like. They have it down here. With food like this available we could live here. 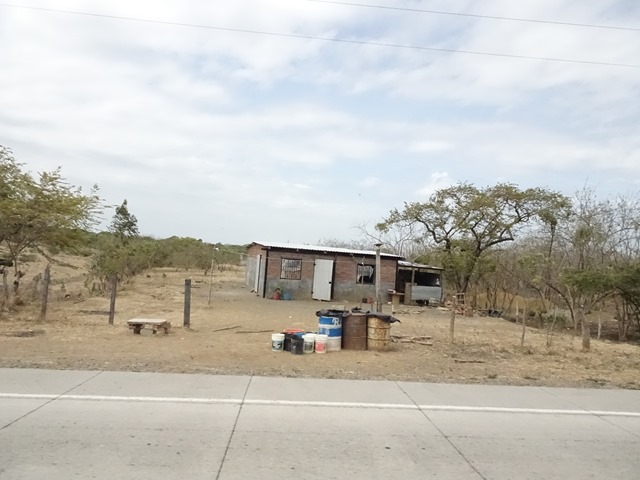 House along the road to Leon. But it is not just the house, it is also the highway. The roads in Nicaragua are great. The Nicaraguan government builds and keeps up the main roads. People in the villages off the main roads get the materials to build the side roads given to them by the government and they furnish the manpower for free. It’s a socialist country that actually works quite well given it’s history of American meddling in its internal affairs. As we have so often discovered in our travels, they don’t care for our government, but they like Americans. 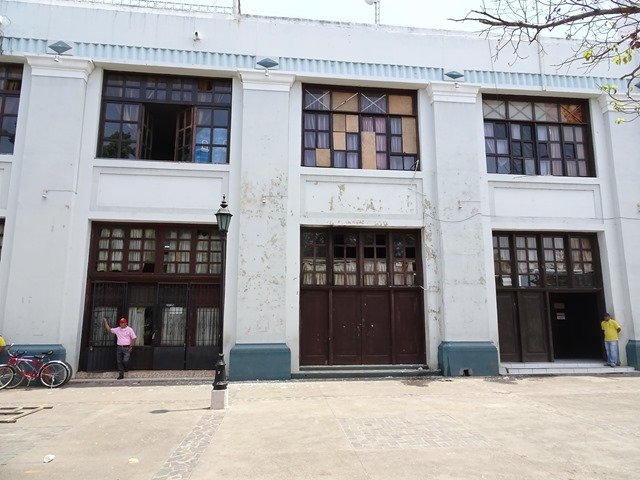 Those demonstrations I mentioned against the decrease in pensions and increases in taxes also took place in Leon. This was the government building on the main square that suffered the brunt of the demonstrators frustration. Broken windows and chipped paint from thrown rocks. 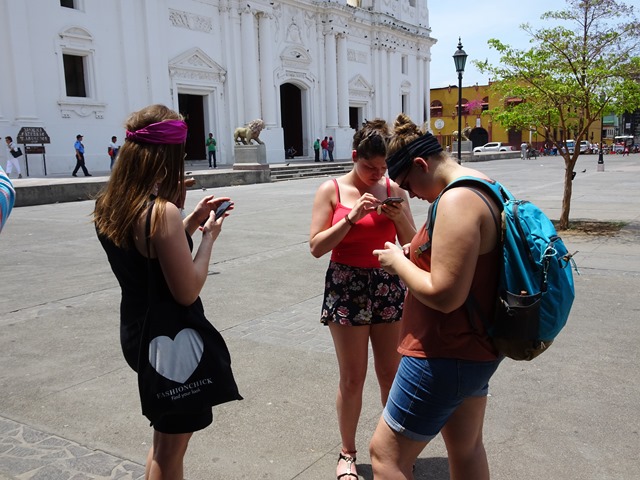 Lions were everywhere in Leon for some reason. Clueless Bob. 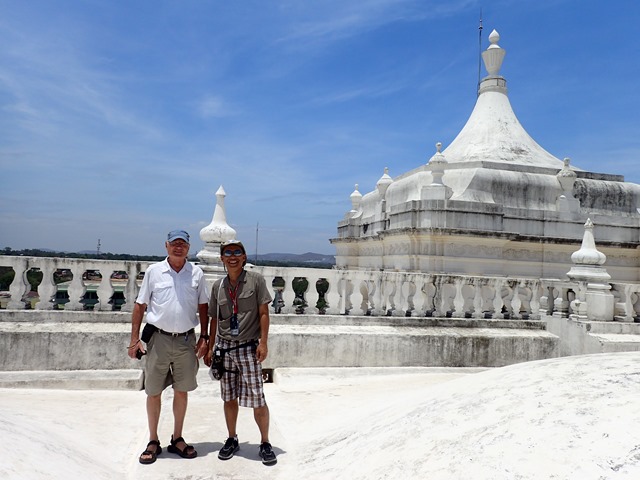 Cathedral Rooftop scene. Talk about being snow-blind in the tropics. I may have a permanent squint. Darned wife only brought her sunglasses along and not mine. You’d think that after all these years she’d know enough to remember to bring mine also. Blind Bob. 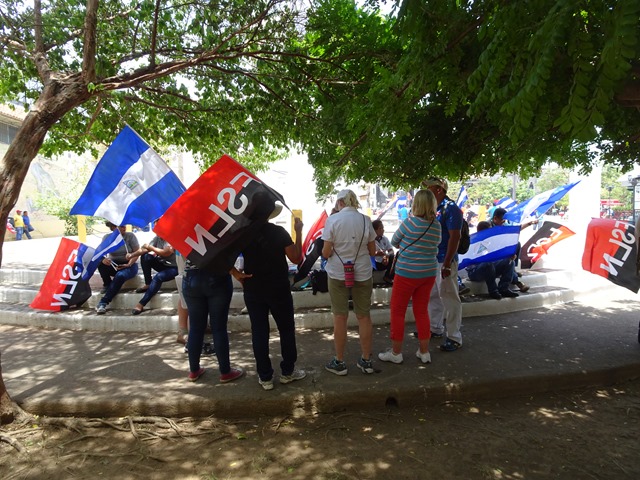 Our little group with some demonstrators. These government workers who weren’t at work, but were showing their support for the government. The red and black flag has the letters FSLN, the blue and white flag is the Nicaraguan flag. The political situation can be summed up easily – It’s complicated. You have to be here to really understand the significance of those two words in the life of people in Central America. 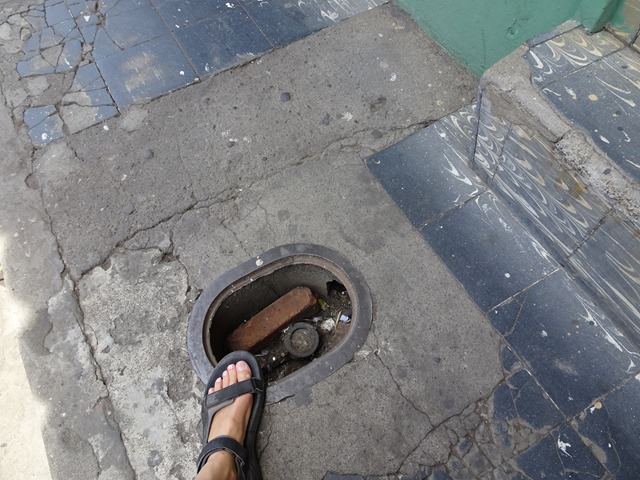 The country does have it what are they thinking moments. The sidewalks in Leon are full of holes as the utility access covers are often missing. No looking for tab tops here. Broken ankle prevention is the order of the day. See what you can miss when you don’t travel to places like this. Or is it, you have to be missing some grey matter to travel to places like this. Confused Bob. 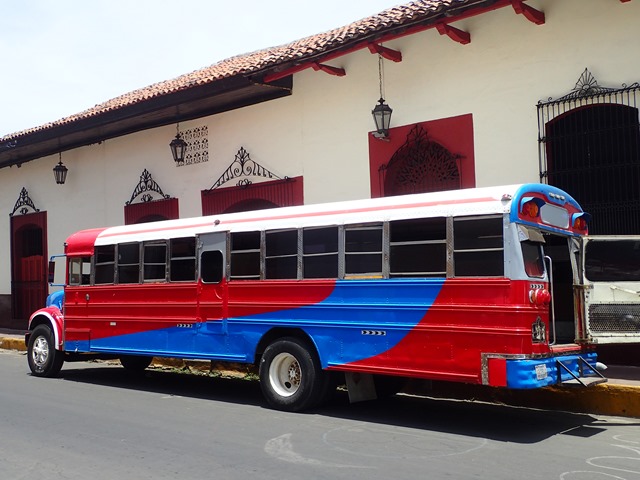 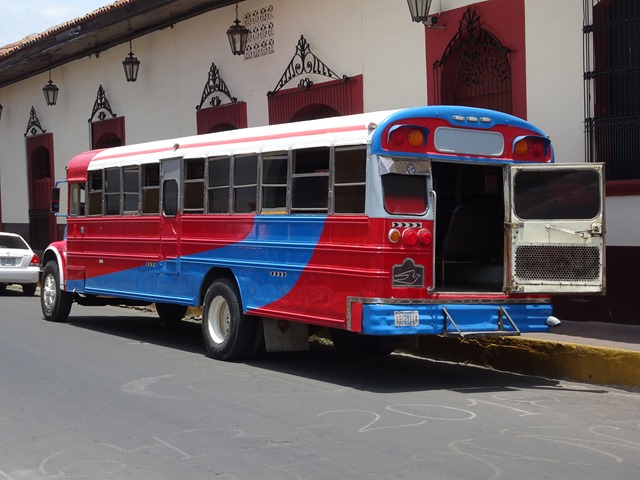 Making up for yesterday’s pathetic attempt at a chicken bus post. 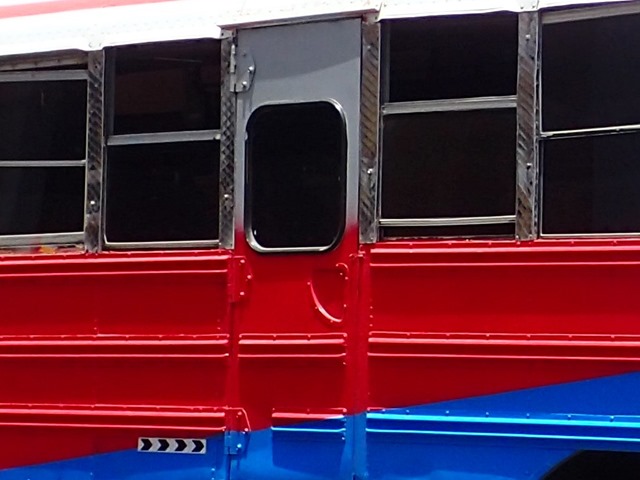 Richard was careful to point out to me the poor quality of the paint jobs on Nicaraguan wannabe chicken buses. Note the over spray on the door and the bottom the window at the far left. Guatemala definitely stands head and shoulders above the other Central American countries we have visited in the Chicken Bus department. As the saying goes, “Everything is bigger and better in Guatemala.” Attribution: Richard Chang, Guatemalan citizen. 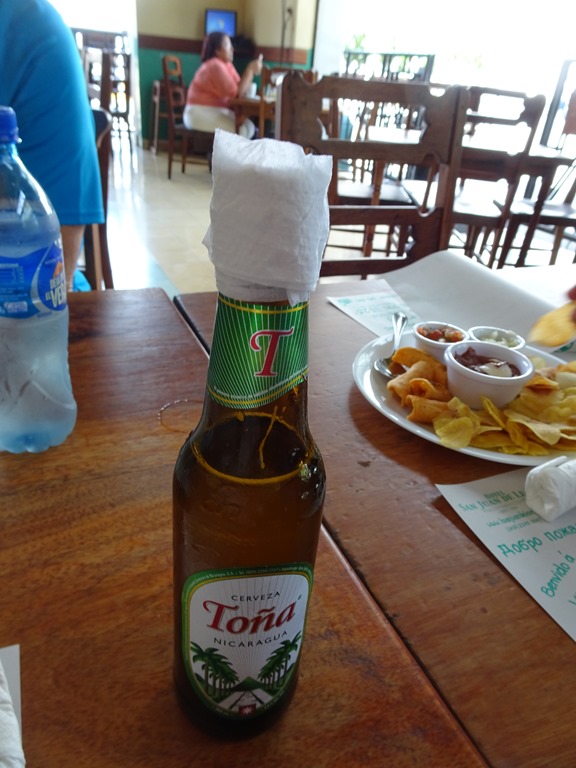 Excellent beer. The piece of napkin on the top, which I had removed and very poorly put back on, is there so that if you want to drink from the bottle you can wipe the top off first. I did, and did. 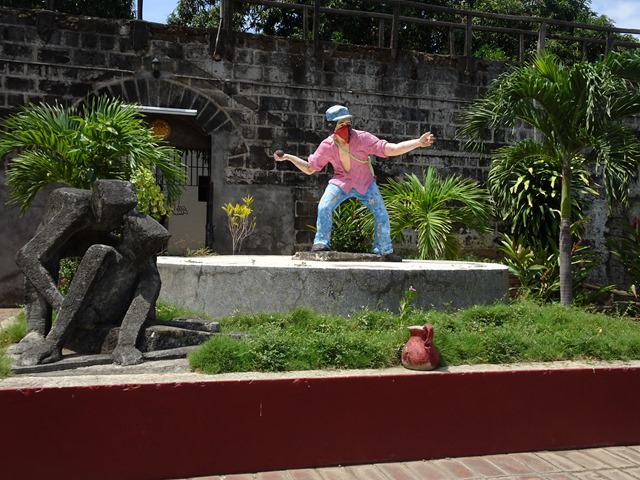 Sculpture of a demonstrator in the garden area of a museum we visited. Words like Samosa government, Sandinistas, Contras mean little to us, though some may recall them. To the people of Nicaraguan they mean the deaths of tens of thousands. In the US we get “our” side of the story. Here we get “their” side. Funny thing is that even though the side we opposed won, the country turned socialist, not communist. It was little hazy to see it clearly, but is another volcano belching gas. 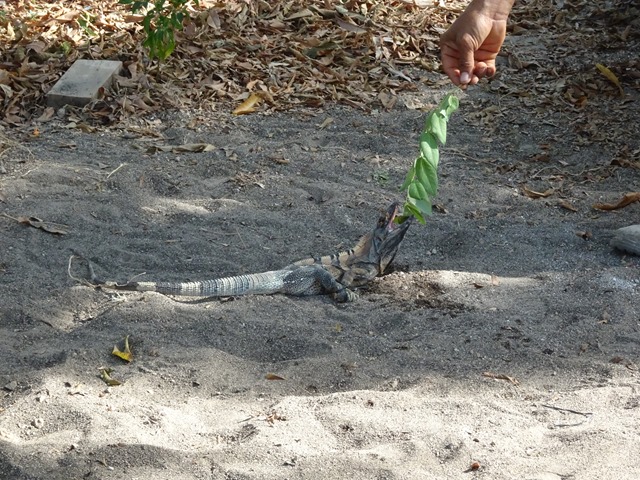 Iguana. They sell they to people along the road. Not as pets, to eat. Why would you put a wild creature in a tiny cage when there is a much better use for it. 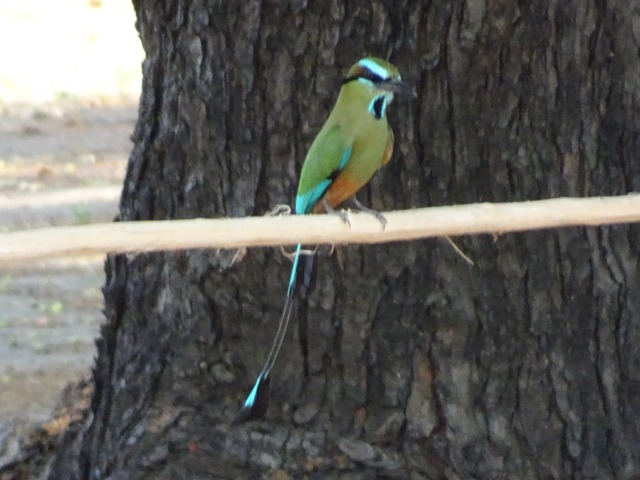 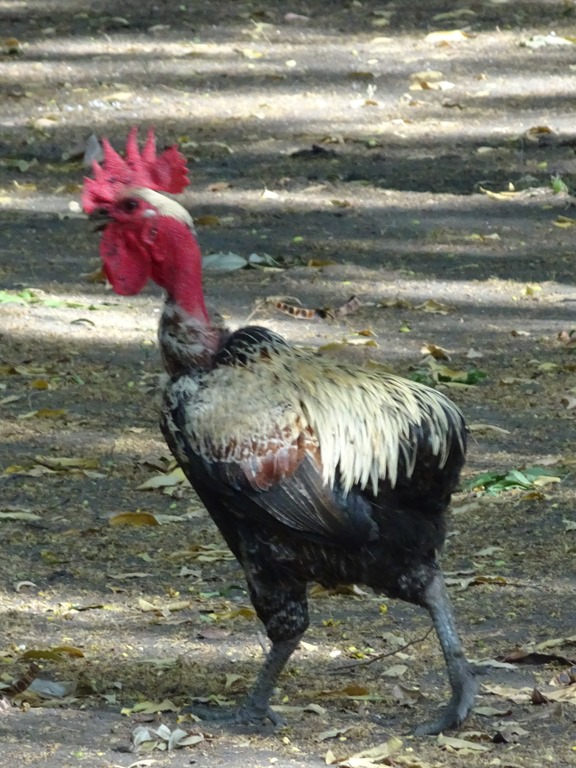 Mot mot an tail-less chicken. Hard to believe, but I was able to identify both of them. Beginning Birder Bob. 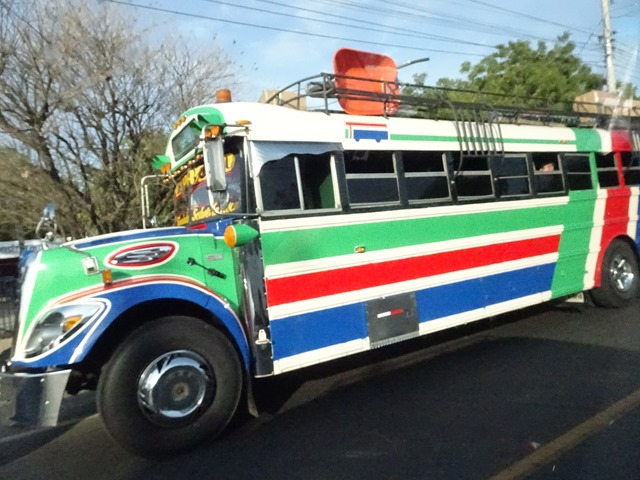 Wheelbarrow with Chicken Bus under it. Nicer paint job, but is still a Nicaraguan bus. The little vertical rack extending down from rails on the roof is the key. Chicken Bus expert Bob.

Email ThisBlogThis!Share to TwitterShare to FacebookShare to Pinterest
Labels: Nicaragua