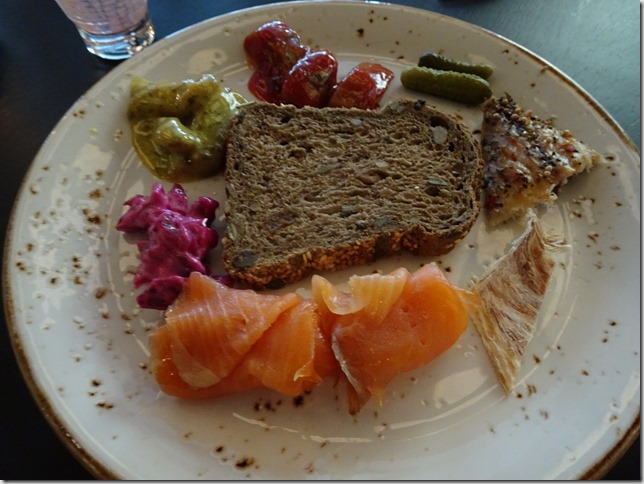 This is why I love Norway. Pickled herring, smoked salmon, gherkins, beet salad, nut bread and two kinds of other fish, smoked and spiced, the other one dried and tough as a boot, but the best flavor by far. There is no breakfast I’ve ever eaten that compares to this. And the best part is we have almost three weeks in Norway so I can eat like this most every morning.  And it was very difficult, but I limited myself to just one plate. That meant I’d done like Linda wanted and didn’t pig out, meaning I now eat to my hearts content the remaining days we are here.Very Happy Bob. 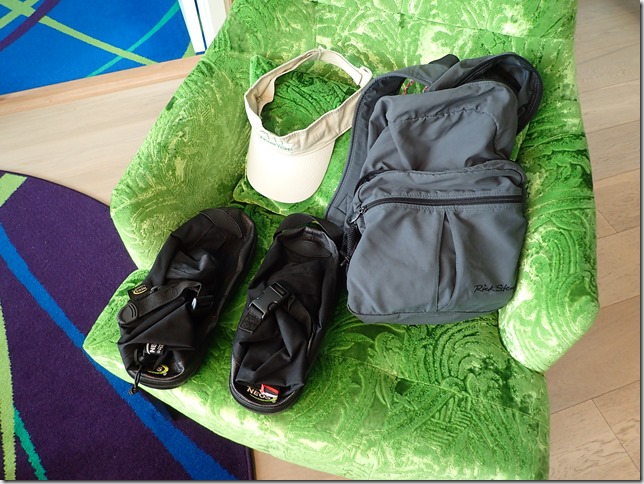 With our day’s destination being the top of one of the hills in Oslo, Linda wanted to be prepared, taking along her visor to ward off the sun and her snow boots should the snow be deep. While the snow boots stayed in her daypack, visor was quickly out as the clouds lifted and it turned out to be a glorious day. Though, due the temperatures, she soon replaced the visor with her toque. Blind but warm Linda. 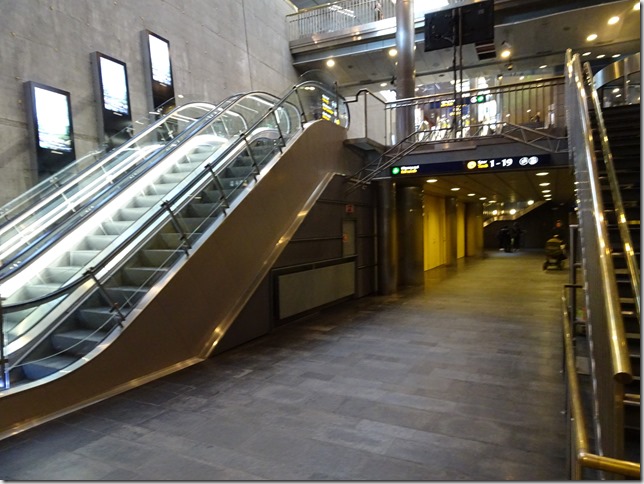 The escalator that one takes from the main floor of the train station to get to the T-bane (metro) station, or in our case, one takes several times while wandering around following signs that lead nowhere. What was needed was a sign that pointed directly behind me, which was where we finally wandered , at is was where the metro station was. I left out that we had also wandered around the outside of this building looking for the entrance, but had apparently stopped just before the entrance and turned around. In the end we had wandered so much before finally finding it, neither of us is sure we can find it again. And at the end of the day when we came back to this station we exited on the other side of a street we hadn’t been on before. The joys of exploring distant lands. Lost Linda and Bob. 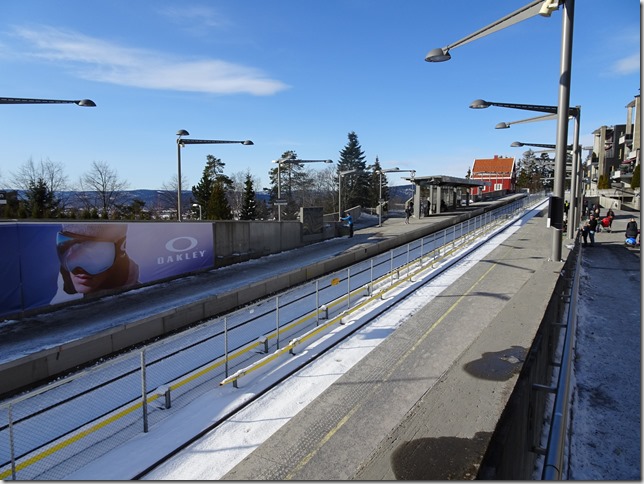 In the end we did find the station and the right train, and even managed to get off at the right station, even if the train doors did try to eat my left arm and daypack. Linda is such an intelligent person, but somehow the words “hurry up” get translated into “keep going at the same speed”. 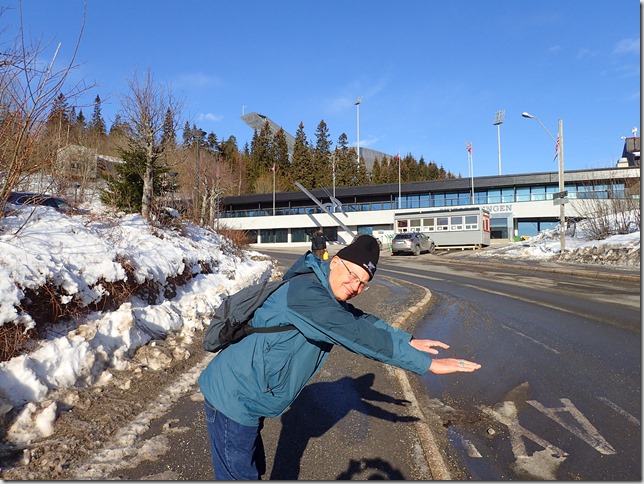 Displaying my non-olympic ski jump form with the Holmenkollen ski jump tower at the very top of the photo. We thought it would be cool to visit it, but were we ever wrong. It was way beyond cool, in fact it was mind boggling awesome. And that was made more so by seeing it in the winter with snow everywhere. 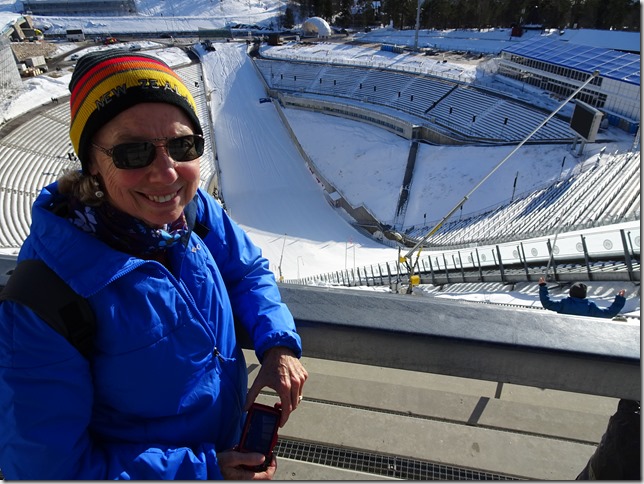 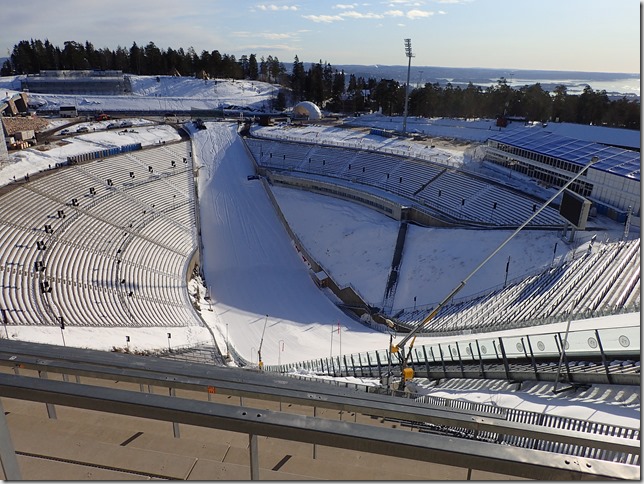 The landing area has seats for 30,000 people.  High up above this and behind me is the take-off ramp. Yes Linda, we will going all the way to the top. 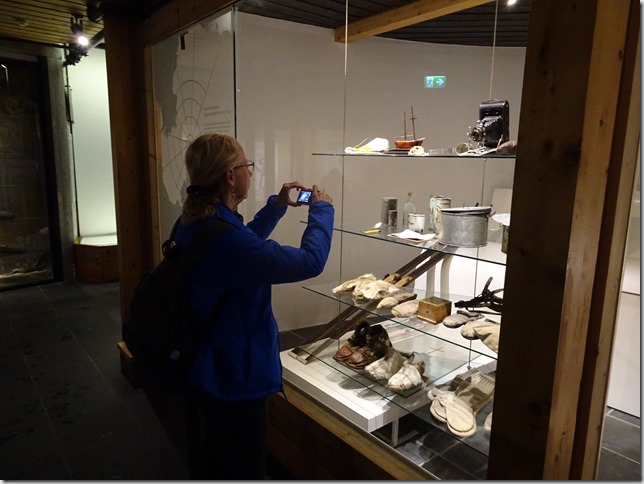 But first there was the ski museum to visit. Virtually all the signs are in Norwegian and English, making for a great experience. At first I feared Linda was going to take a photo of every display. She didn’t, but I know that someday she will find a museum where she will. What skiers wear today is nothing compared to what the skiers of olden times wore. An interesting fact we learned was that recreational skiing has only been around since the 1850’s, spreading from Norway in the late 1800’s to the rest of the world. 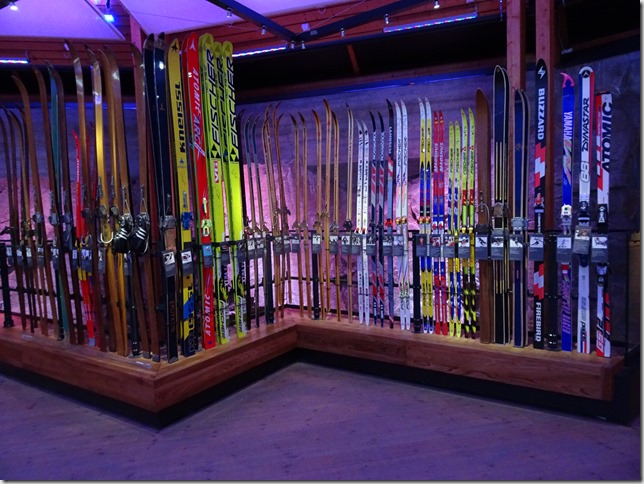 The autographed skis of many Norwegian International champions. We are not skiers and I guess it shows when our favorite part of the Winter Olympics is the Biathlon. To me, those are probably the greatest athletes in the world, to be able to ski all out, then be steady enough to hit that tiny target, before doing it all over again, both standing and prone. Impressed Bob. 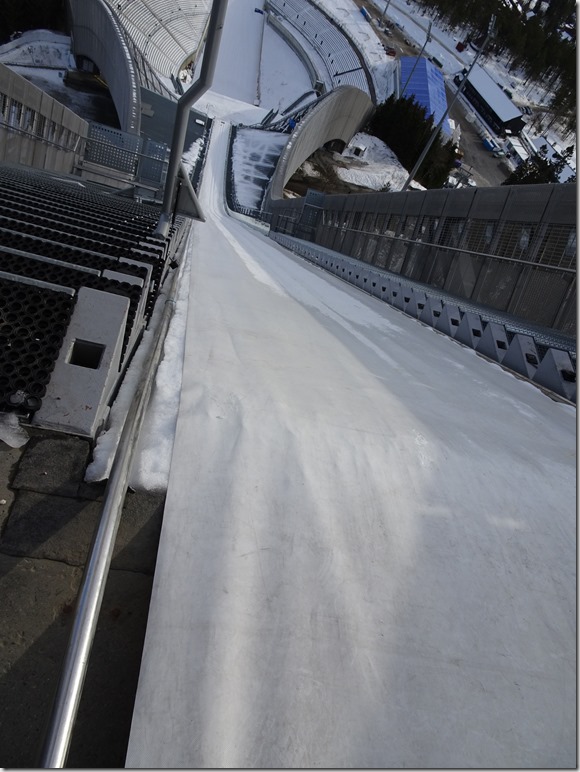 At the top of the ramp, this is what the ski jumper see’s, and what he or she doesn’t see is the landing area which is out of sight below the wide white area at the bottom of the ramp. May “crazy” doesn’t begin to describe a ski jumper. 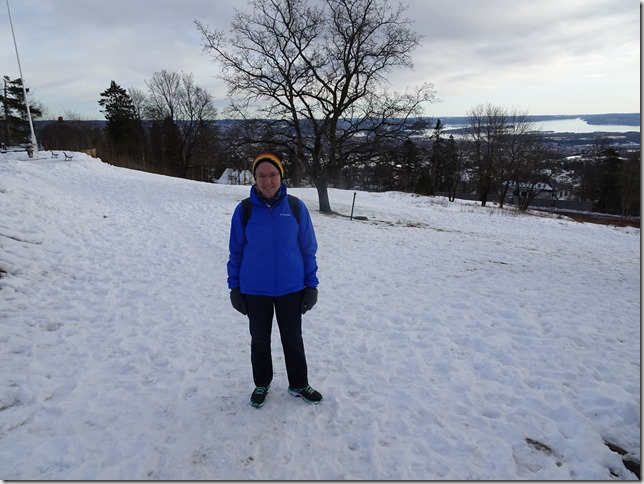 Obligatory Linda snow photo. I know that the entire northern part of US is covered in snow, heck Linda and were born and raised up there, but there is just something about being in Norway in the winter that is very special. 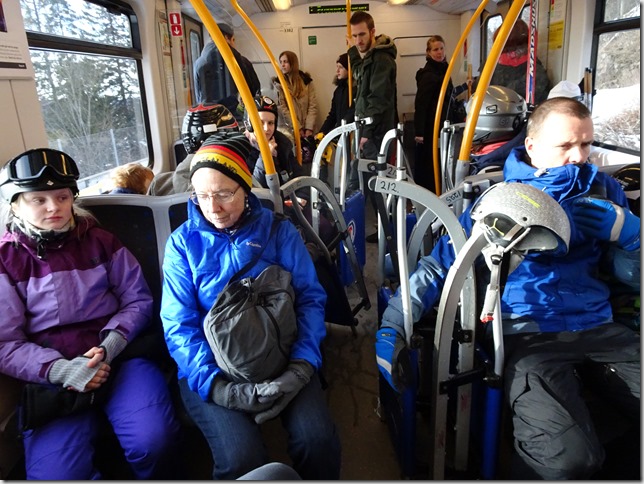 Back on the metro heading to very top of the hill where the best sledding run in Oslo starts. 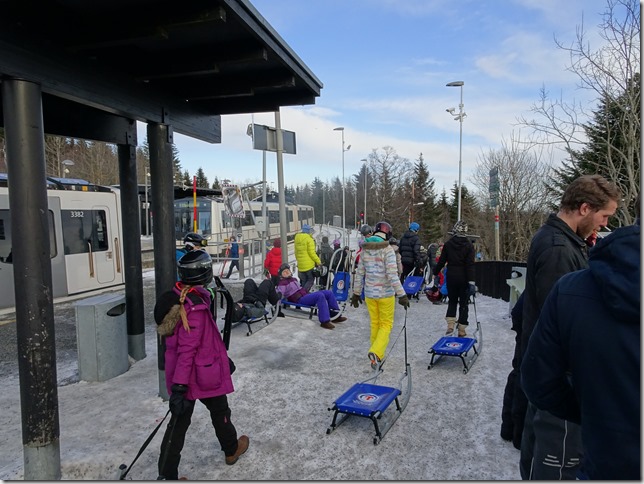 I wish now I had taken a video of the masses of people exiting the train and streaming by with sleds. 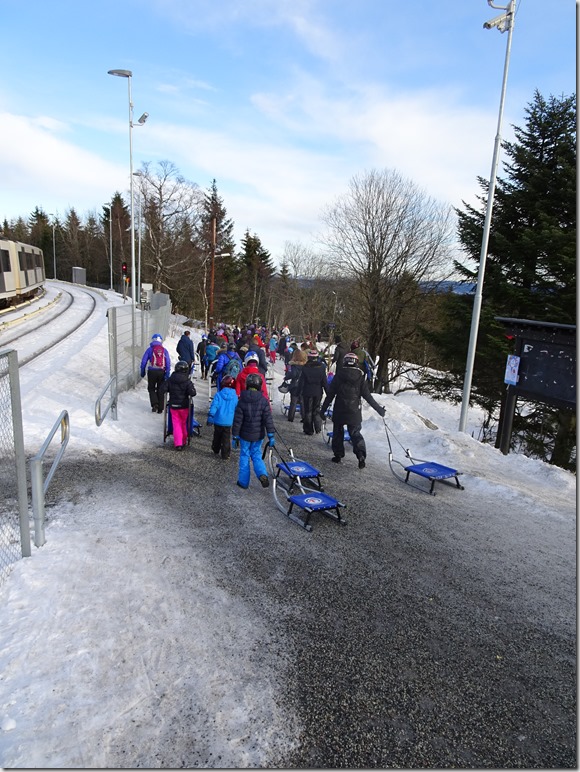 We let the mass of them go by, then Ms. slip and slide and I started down the hill. I can happily report that while there were more than a several sharp intakes of breath, and few seconds of flashing feet, no bones were fractured, nor was even any balance lost during the long descent to the area near the start of the sled run. No sledding for us today, but maybe on Monday or Tuesday if Linda works her courage up by then.. 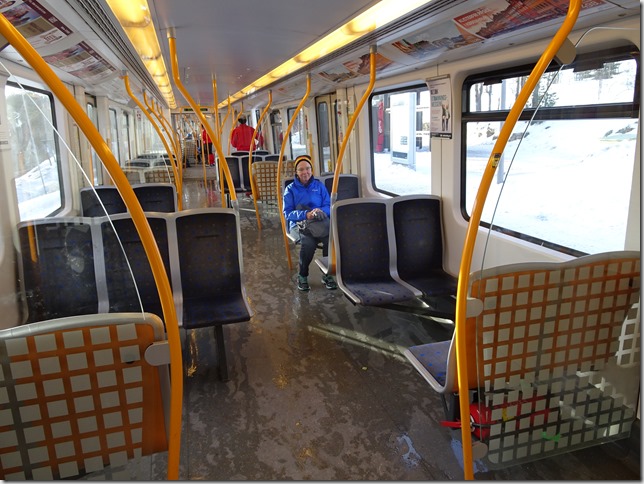 Quite a difference from the packed cars going up the hill. 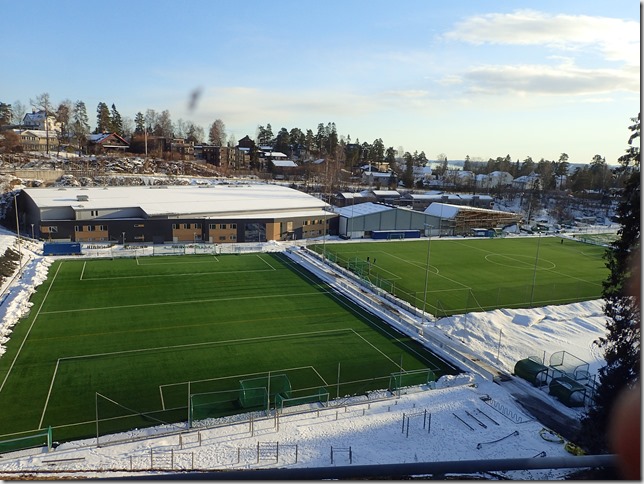 If it rains a little our Major Leagues stop playing baseball. Why should a little winter weather stop Norwegians from playing soccer? There were a number of fields we passed on the ride and on some of them people were out practicing. 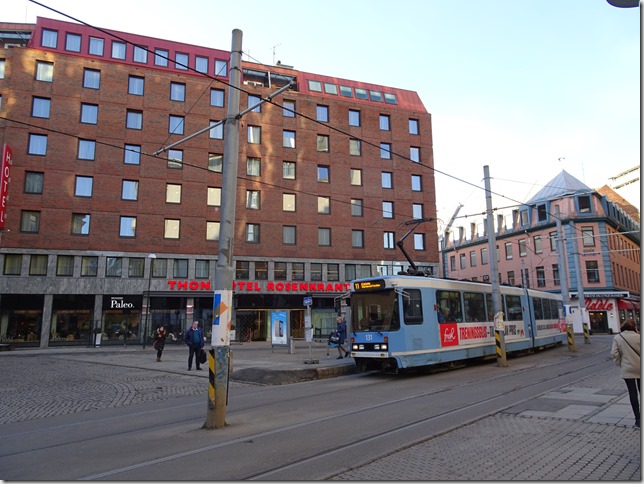 It was 4:30 by the time we got back to our home for the week. It is awesome to have a tram stop right in front of the hotel. But don’t think that was just luck, it was another reason we picked this hotel. Tired but happy Bob and Linda. 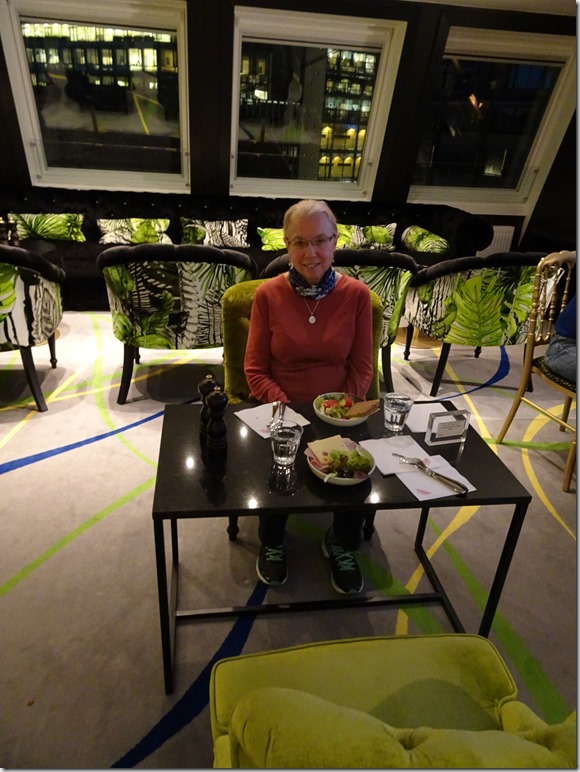 Like I said earlier, the décor and architecture of the hotel lounge is best described as eclectically eclectic. And thus ends another great day in Norway.