A Dose of Culture Today


Yesterday had been a very long day, so we decided to stay close to home today, but that didn’t mean we had to skimp on breakfast. 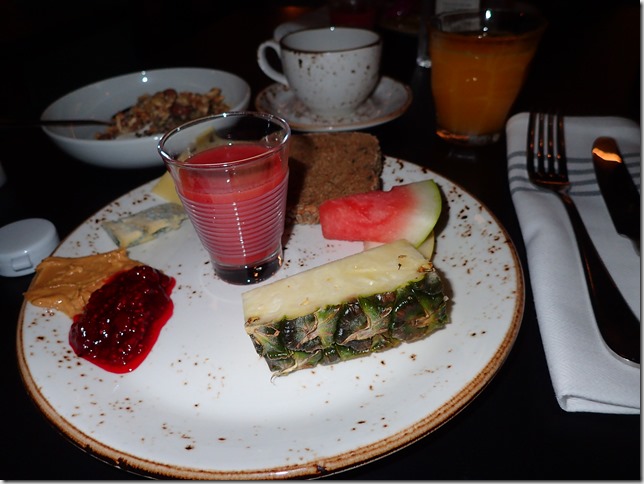 I thought I’d show what Ms. Eats Healthy had on her plate this morning. Obviously she is not a fishterian like me. So sad, so sad. Deprived Linda. Speaking of deprived Linda, as I’ve mentioned in the past, Linda was not allowed to have a horse when she was growing up even though she lived on a farm which has resulted in a lifelong feeling of having lost out on something important in her youth. As an antidote to her feeling of melancholy, I encourage her to hug a horse every time she sees one. Who would have thought we would have found one tethered to a building less than a block from our hotel. When Linda commented on how stiff he was, I pointed out anyone would be if they were standing out in the below freezing temperatures Oslo was experiencing. Life is too short not to laugh at ourselves. 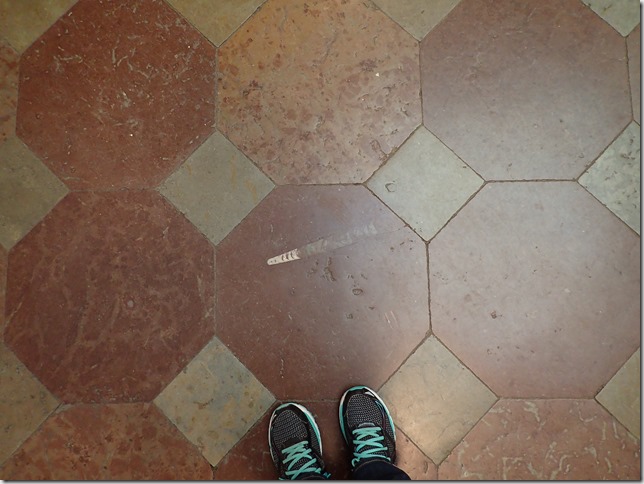 One of our stops today was the National Art Museum. We were climbing the stairs to the first exhibit rooms when I noticed Linda wasn’t behind me. Turning around I found her down on the landing taking photos of her feet. As I learned, it wasn’t her feet she was interested in, it was the fossils in the tile. 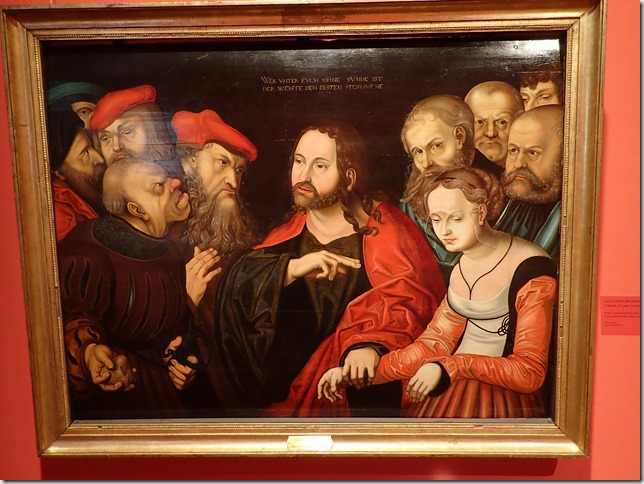 Why we enjoy the art we do. Besides that, I was able to translate the German words making me mighty good in Linda’s eyes. Call me easy, but that made my day. Happy Bob. 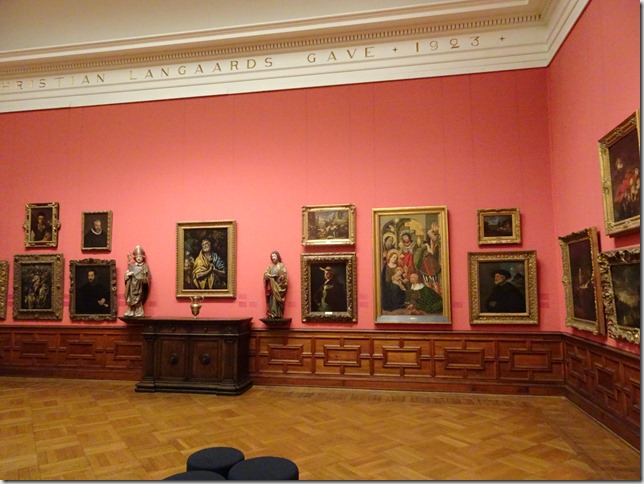 The moment I walked into this room I knew who had painted the painting hanging over the cabinet. 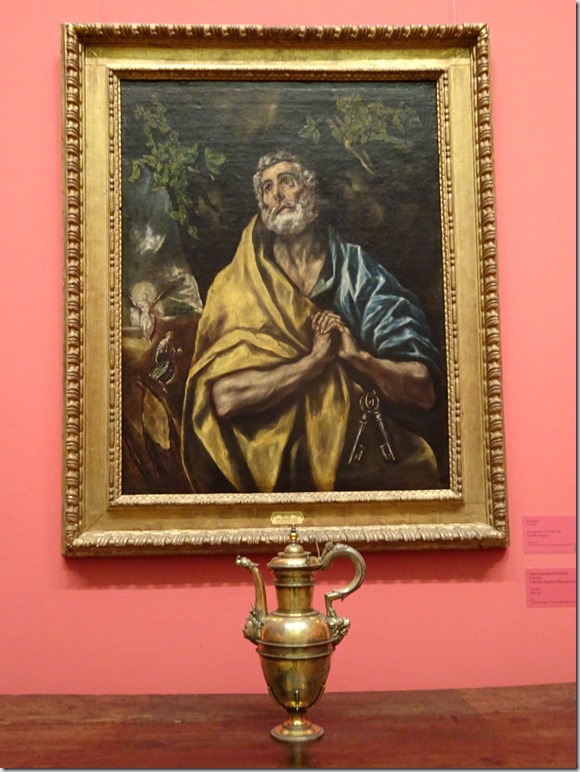 He’s my favorite artist. Think dark and moody. He’s from Toledo. He was known as “The Greek”. Sorry, but if you haven’t guessed who he is by now, me telling you who he is isn’t going to mean anything. Besides, I probably wouldn’t be able to guess your favorite artist either. Ordinary Bob. Some paintings require more study than others due to fact they have an interesting story to tell, like this one. And don’t think for a moment that I am into art in any way other that truly enjoying what I like. Ask me to draw a person and you will get a stick figure. Non-artistic Bob. 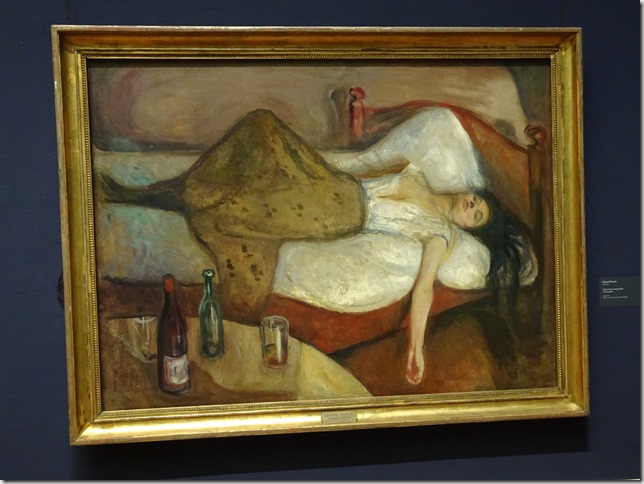 This painting by Edvard Munch, Norway’s most famous artist, is titled “The Day After”. I’d say this a painting that most people can instantly relate to. For any Munch fan’s out there, the principle reason we visited this museum is because Munch’s original painting of “The Scream” is on displayed here. I guess you could say that Linda and I don’t know very much about art, but we know what we like when we see it. We hurried through the room with the Picasso’s and the artists who copied his style. So why did we linger a long time in the room of Munch’s paintings then hurry through the several rooms of artists that copied his style? I guess there is just no accounting for taste when it comes to art. 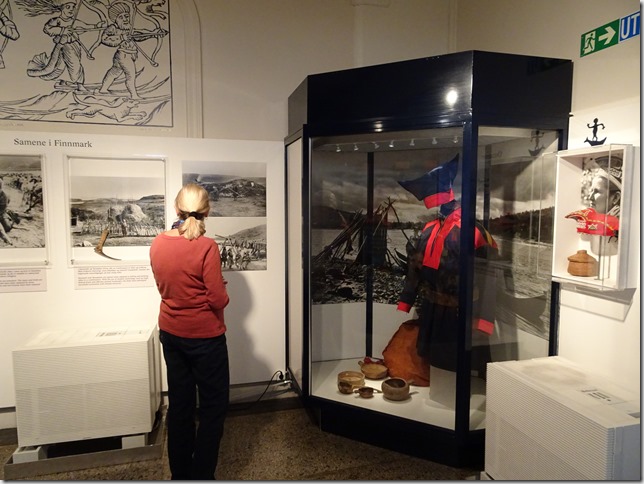 Another museum, where we learned about the Sami people and their culture. We knew them as Laplanders, and they are the indigenous people of the far north of  Norway, Sweden, Finland and the Kola Peninsula of Russia. One thing that travel really brings to the forefront is that no matter what country it is, the indigenous people were either mostly exterminated or forced into adopting the ways of the “more civilized” people who were occupying their lands as if it was their right. It’s a simple question that is impossible to answer: “What makes our way of life better than theirs?” And before we blurt out “ours” and list our reasons, perhaps we should walk a mile in their shoes. On His Soapbox Bob. 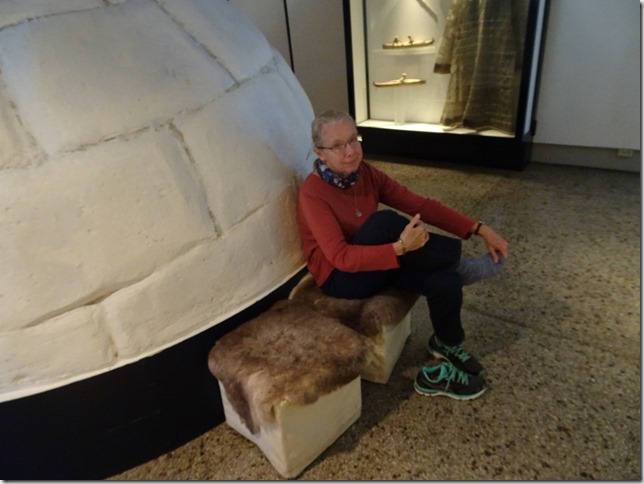 First “Footie Photo’ of the trip. And you’re right, Linda was definitely not happy I took this. Possibly in Big trouble Bob. 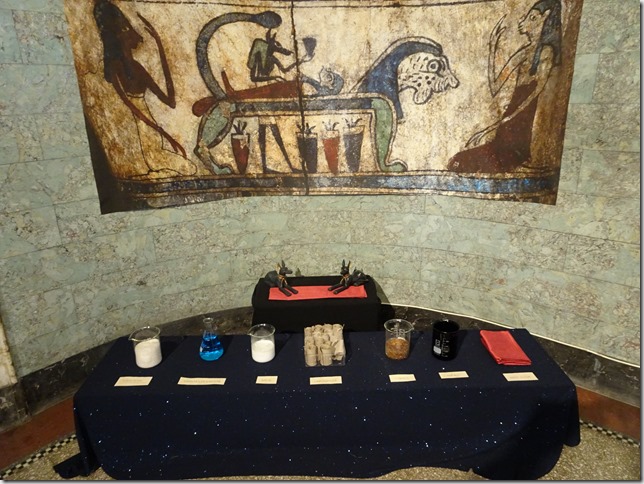 This is the great thing about travel, you never know what you are going to stumble upon. This was an exhibit of all the items the ancient Egyptians used to to turn the deceased into mummies. 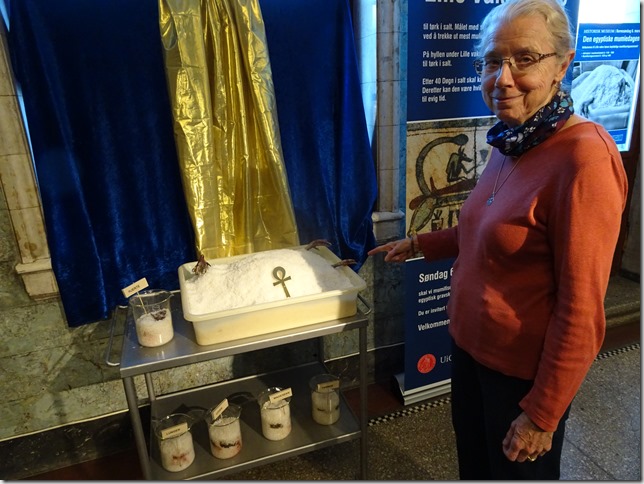 This is the – There’s no way I am going to touch that thing – look. It’s a pan full of salt, and under the salt is a chicken. Linda is pointing to a foot as I tell her to touch it. That’s its head sticking out of the other end, and it’s heart is the beaker to the left of the pan, while below are other internal organs. Next Sunday they are going to actually mummify it. This is exactly why we need to come over to Europe for three months at a time instead of just one month. Now we won’t get to see them do it. Sad Bob. Happy Linda. 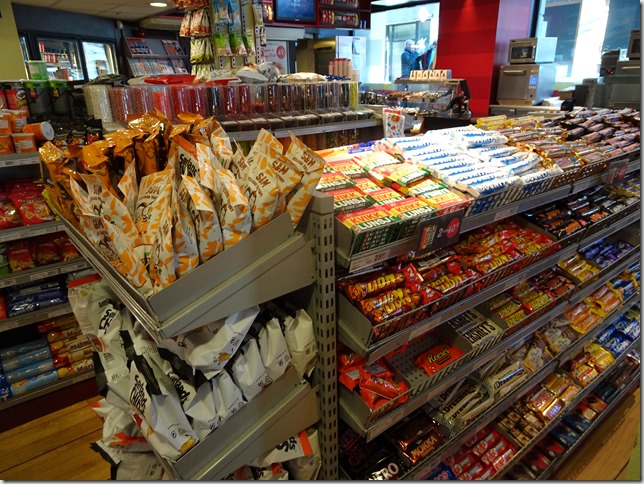 This what makes an even happier Linda. a stop at a shop to buy more KVIKK bars. She learned to love these the last time we were in Norway. Beside I really like them too. How true is that old saying, “The quickest way to woman’s heart is to give her her favorite chocolate bar.” Quick Bob. 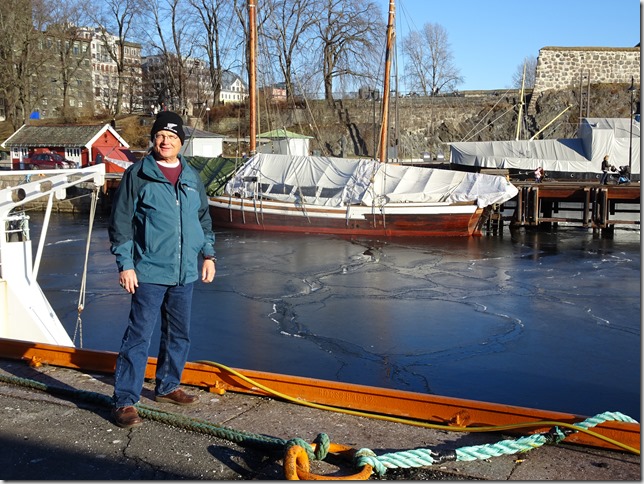 It’s a little icy in the harbor. 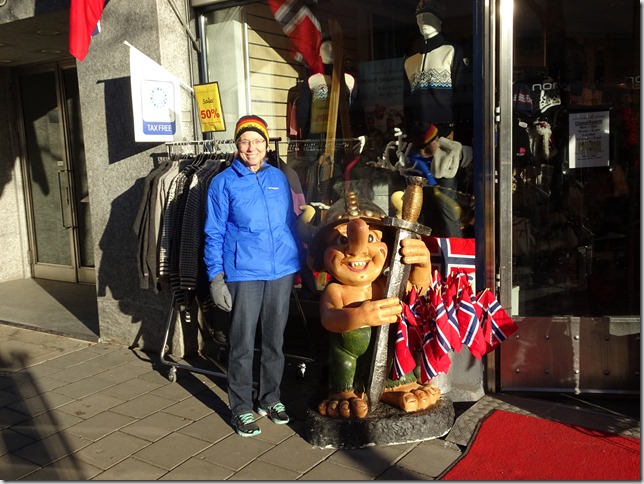 I was ordered to take this photo of her. Something tells me that if I don’t include it in today’s post I'll never hear the end of it. Smart Bob. 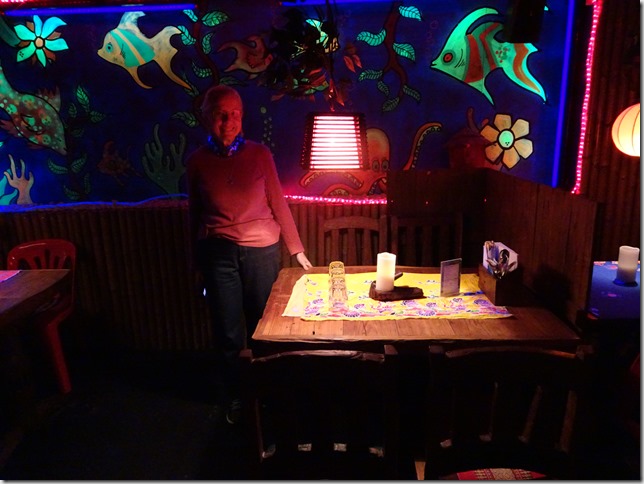 Our favorite Thai restaurant in Oslo. Okay, so maybe it is the only Thai restaurant we know in Oslo, but we did love the food we had here the last time, okay, the only other time, we were in Oslo. 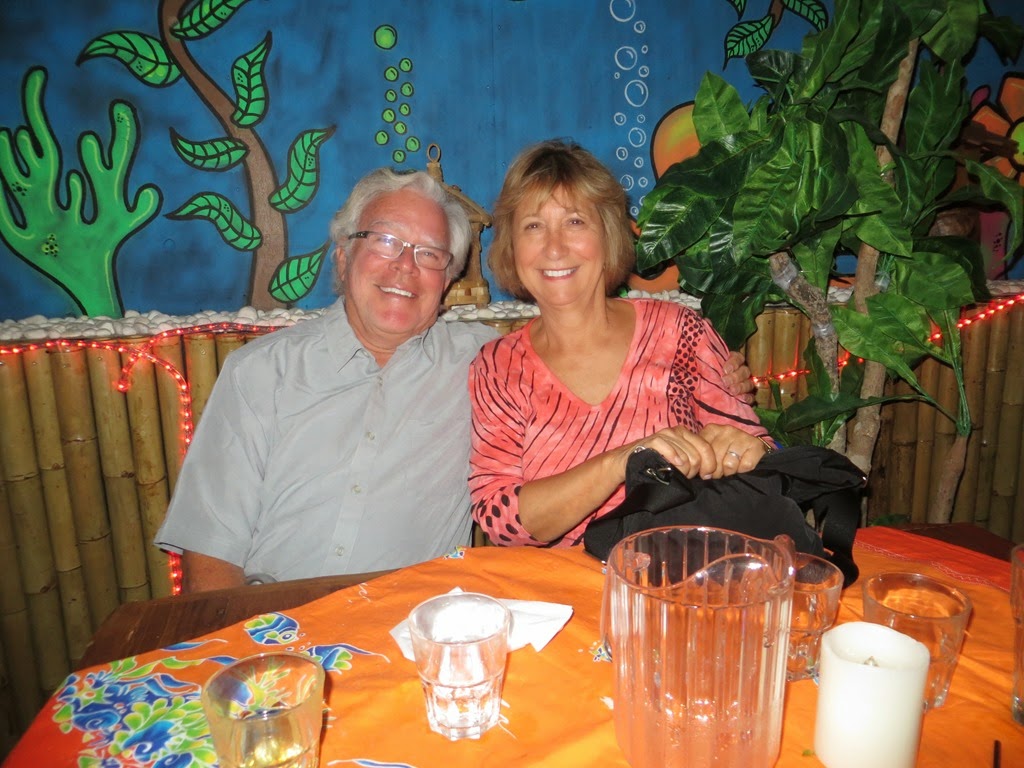 Don’t believe me? Here is a photo of Houston and Von who we ate with that night with that very same background painting behind them. Elephant Memory Bob. 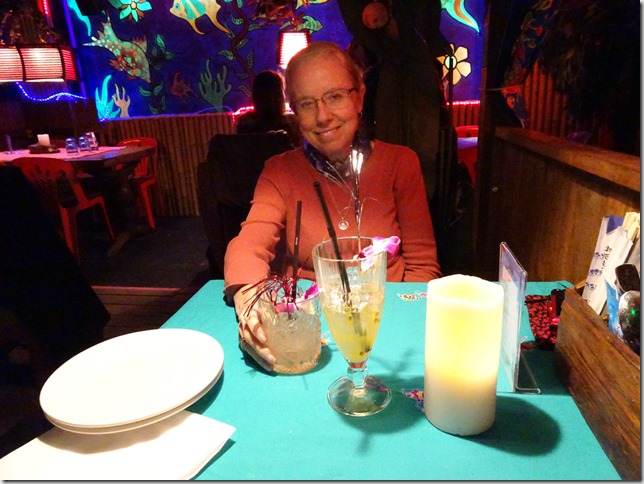 Nothing like a couple of drinks complete with fresh flowers in them to make the pre meal time more festive. Glowing Linda. 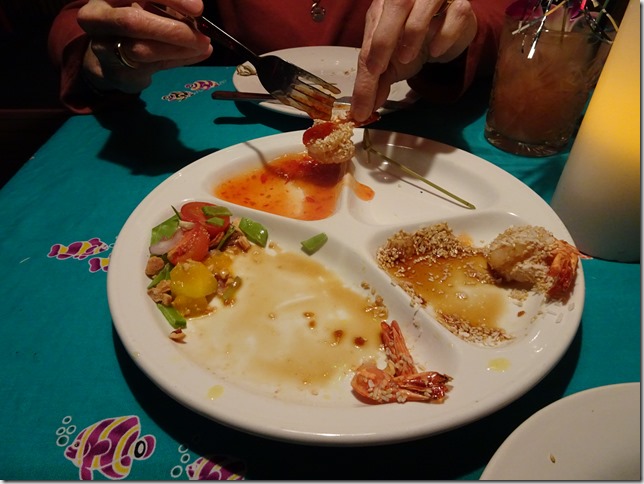 Our appetizer plate. It was right at this point that Linda said, “We forgot to take a picture.” As you can see I fixed that oversight. Unfortunately not shown are the spring rolls and seared tuna, though you do get a glimpse of the coconut sesame prawns. What can I say, we were hungry and it looked so good. And it was that good. 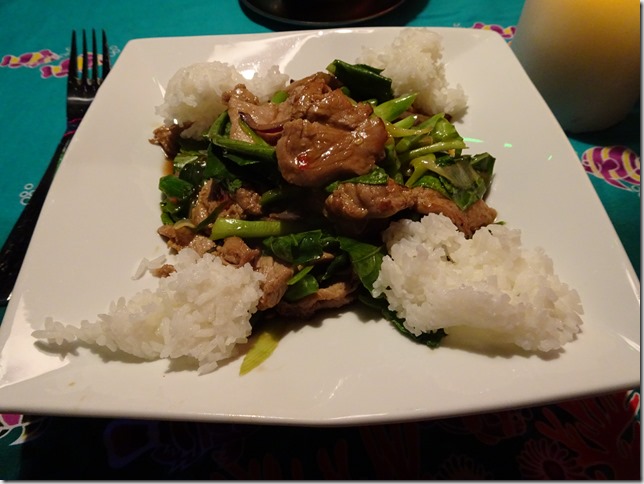 My spicy pork and vegetable dish. I placed the sticky rice at the corners.  Linda had her favorite Thai dish, cashew chicken. I know it’s the only meal she ever orders at a Thai restaurant, but since she has standards, who am I to question them. If you’ve eaten Thai food in the States you know about what you’d pay for a meal like this. tonight’s bill came to NOK 1200, which is almost exactly $100. This isn’t a fancy restaurant by any means and had many tables with parents and children. It’s just that Norway is a very expensive country, but one we find that is worth every Krone. As always, your results may vary. Just remember: Life is not a dress rehearsal. You get one chance, make the best of it.