While it took days for the Tow family to cross the water, it only took overnight for us. We both actually slept very well last night, getting up shortly before our ferry arrived in the port of St. Malo. There were mobs of people trying to get on the elevators and stairs to lower levels, but those on our deck had a much easier time of it. I guess we were like the first class passengers on the Hannibal, while the Tow’s in steerage were like our mobs fighting their way off. 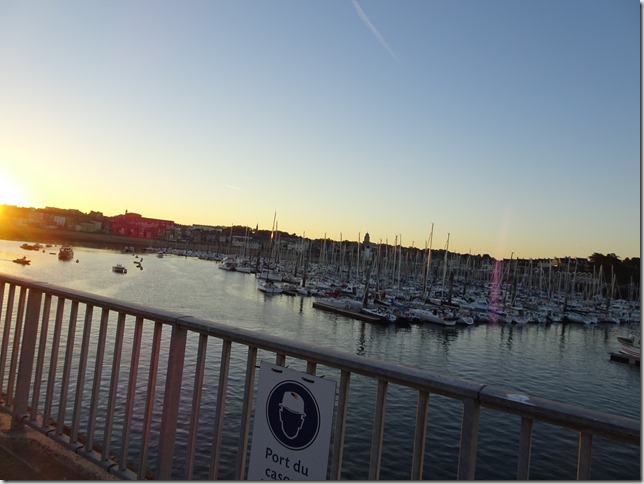 First glimpse of the harbor at St. Malo. Think dawns early light. A  few years ago we had planned to spend a few days here, then changed our minds and traveled further west bypassing St. Malo. The one thing that was soon apparent was that the temperature was much warmer on this side of the channel. It also completed our trifecta of crossing the channel. Over it, under it and now on it. The in it by swimming is never going to happen. so says Linda. Agreeable Bob. 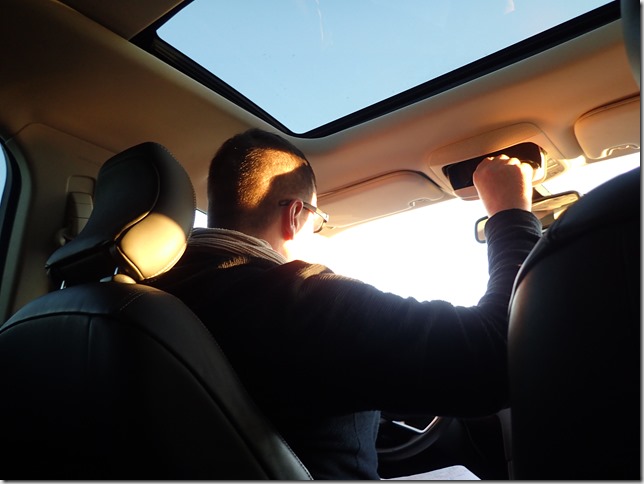 Taxi ride to the airport. we shared the ride a young Frenchman, then paid his third of the fare, the total cost was only 8 Euro, and told him to do the same for someone else sometime. Otherwise look at it as gift from some Americans who enjoy traveling in his country.He seemed genuinely taken aback at our generosity.Maybe he will tell others how friendly and kind Americans are. 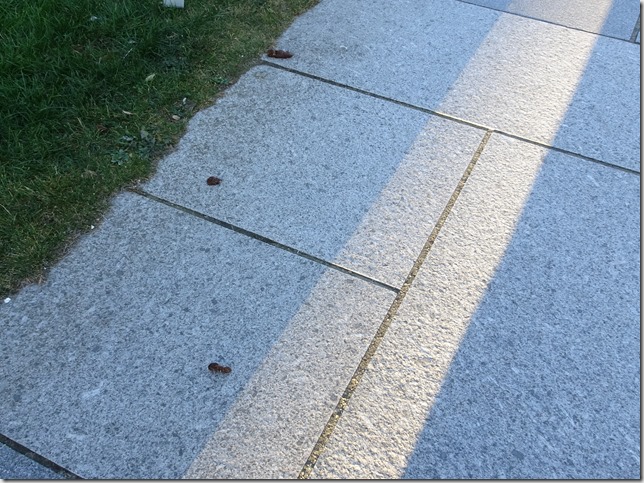 Speaking of Frenchmen. This is how you know one took their dog for a walk here. Nobody is perfect. 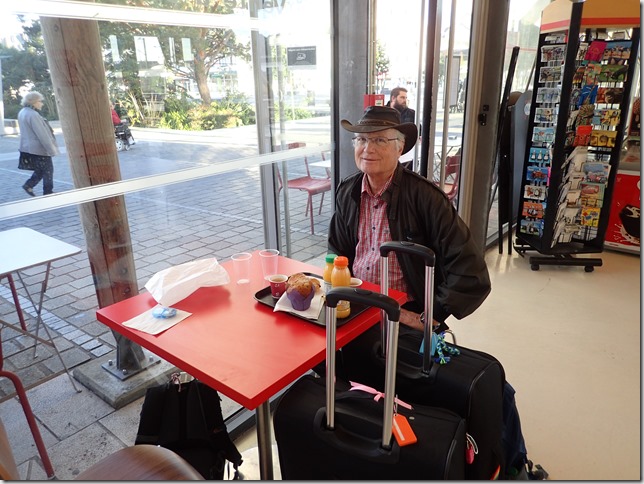 We had read about long waits to get off the ferry and excruciatingly slow lines to get through customs. We then decided to make this a slow travel day, giving ourselves plenty of time everywhere. So what happens? We wait less than 10 minutes to get off the ferry, the bus ride to customs and getting through customs only took 5 minutes, and it was less than 10 minutes from the taxi stand till we were in the railway station. That’s less than a half hour. We had built in three and a half hours from the time the ferry docked until our train left. No problem, meals in France are a drawn out affair, so we just had a long leisurely half hour French style breakfast. Expresso and orange juice, Linda adding a blueberry muffin and I went traditional with chocolate pain. 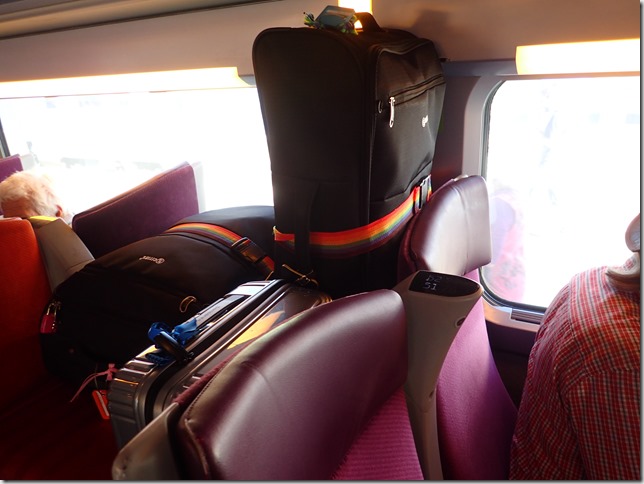 Eventually the train left for Le Mans, and we were on it, and even managed to fit our luggage on. Good thing the train didn’t have to stop suddenly or I would have been flattened as this was Ms. Bring Everything but the Kitchen Sink’s bag. 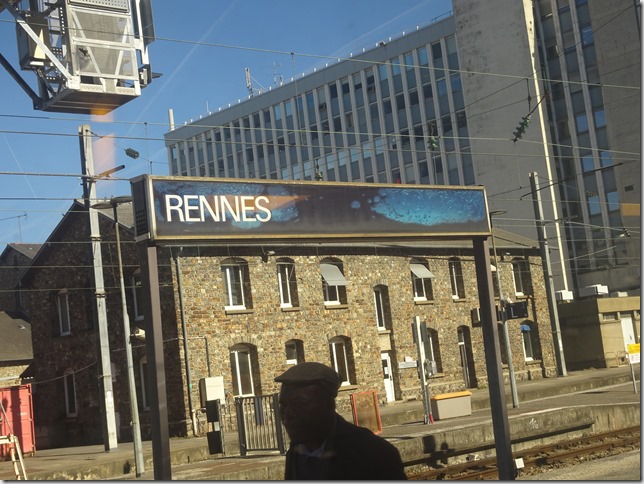 A stop along the way. We rented a car in Rennes a few years ago when we spent two weeks exploring Brittany. Good Memories. I had to wonder how the Tow’s were faring  on their first full day of travel. You can take the genealogist away from genealogy, but you can’t take the genealogy out of the genealogist. Daydreaming Bob. 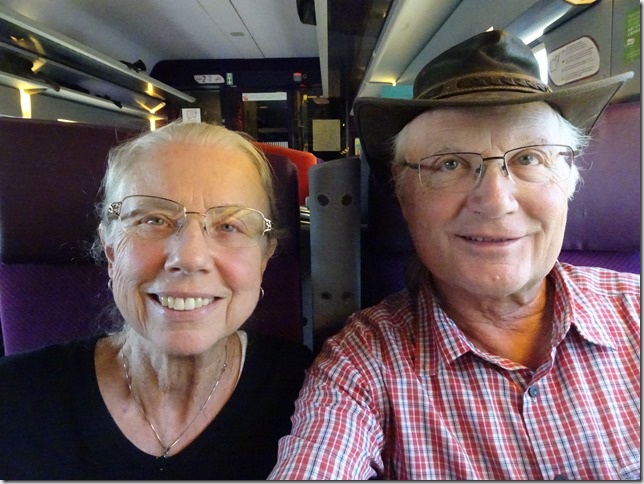 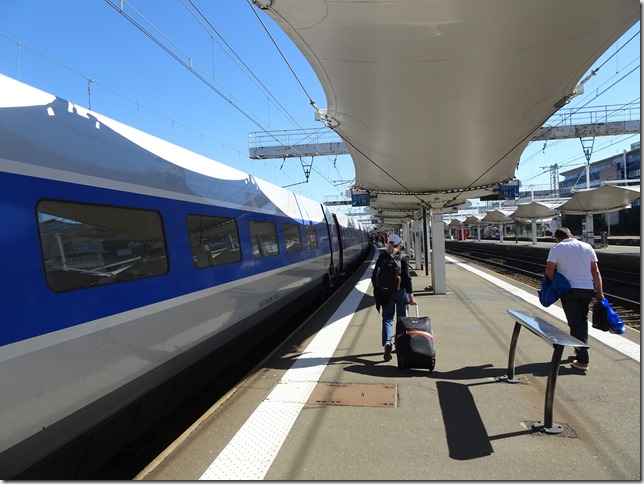 We changed trains twice, once in Le Mans and the second time in Tours. We only had two inconveniences, once because the announcements are made in French, they changed the platform the train was coming in on, and when we realized everyone was going that way we followed. The other time either we misunderstood an attendants  instructions or she misunderstood our English and we ended up at the wrong end of the train, meaning we had to walk its entire length to get to our car. Fortunately it was while the train was still in the station so it was a walk along the platform. Then when we got on the car, it was double decker and I went the wrong way trying to find our seats, tried to ask several people, but encountered a language problem. My very limited French and their non English. All was well in the end as Linda patiently waited while I got nowhere. Then when I finally came back she showed me our seats were just a few feet from where she was standing. Oh well, I tried. Bumbling Bob. 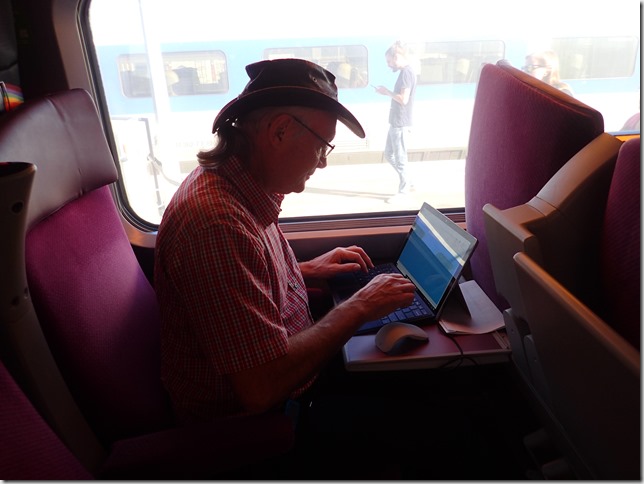 In the end it was nearly five hours waiting at various stations, and over 5 1/2 hours onboard trains. I put my train time to good use, writing both yesterday’s and today’s posts. 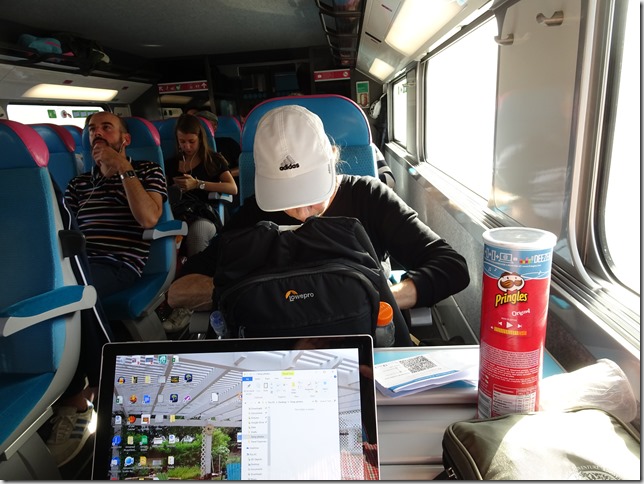 Linda read books, she is loving The Ladies No. 1 Detective Agency books, and tried to find where she had put all the things she brought along. I know the kitchen sink isn’t in there, but anything else could be. If I want all I have to do is ask and out it comes. It’s like a double supersized purse, which is likely why she never carries a purse. One last comment on train travel in France. Can you see why it is easy to tell they don’t have toilet holding tanks on their trains. 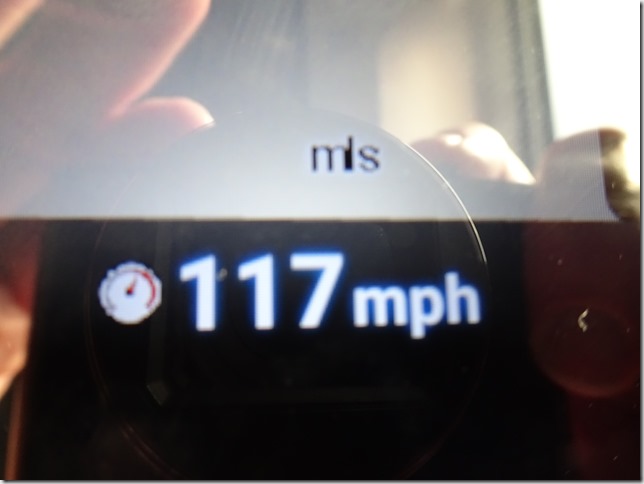 Fast train to Bordeaux. I like to watch our progress on the maps.me app on  my tab. 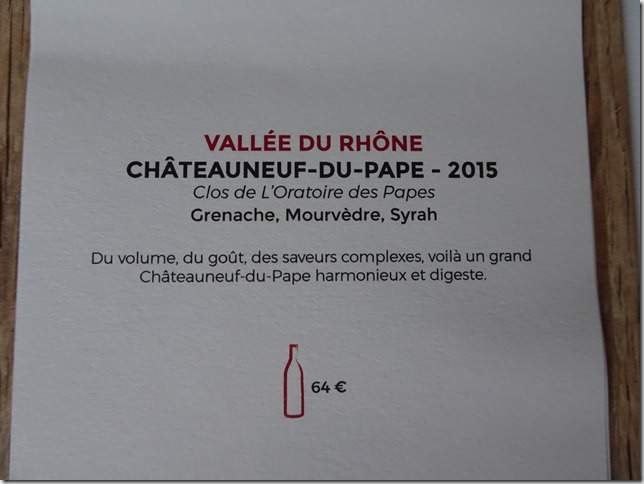 Same type of wine we bottled two days before leaving Retama,. To be perfectly clear it was a wine using the same three grape varieties. Still everything I read about this blend said it would age to a fabulous wine. Unfortunately I won’t be trying this one so as to compare the taste with ours when it is done aging. 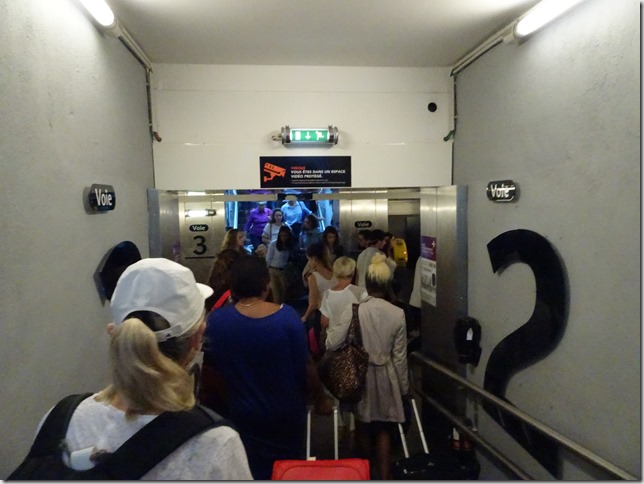 We arrived at the Bordeaux train station just after 6 pm on Friday night. To say it was a complete zoo doesn’t begin to do it justice.

Where the taxi signs pointed was nothing but masses of people waiting for trams. I finally asked a young man, he spoke very good English, and he pointed us in the right direction. Maybe our good deed to the young Frenchmen this morning was being repaid to us. One thing I do know, middle aged and older French people you see on the street rarely if ever speak English. The young people are an entirely different story. We have always had a great time in western France, the rest of the country not so much, and with that we shall end our day at a hotel near the airport where tomorrow we begin the next part of our time in Europe.