A Rainy But Great Day 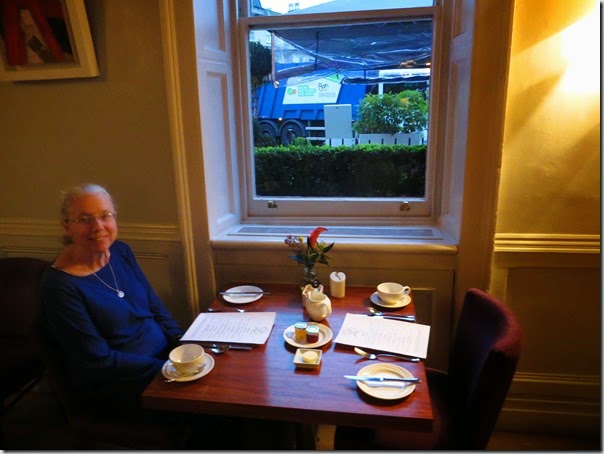 The view out the breakfast window this morning. I teased Linda that she had booked the cheap tour of Stonehenge and this was our transportation. I guess she was wasn’t as awake as I thought as she told me what I could do with my comment. Grizzlies can be grumpy in the early morning if you trifle with their trip to see some rocks. 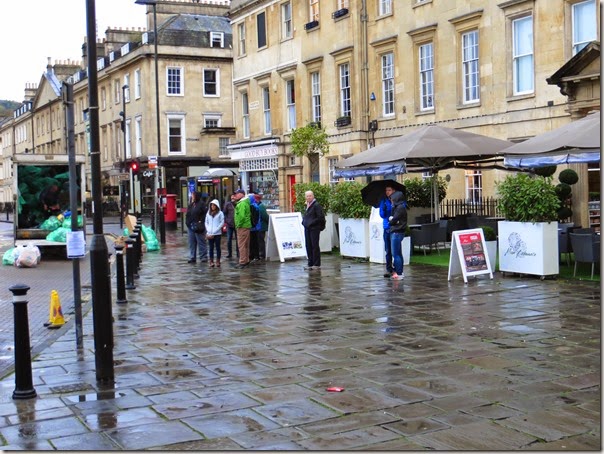 Waiting for the bus. It may have been the only time that it didn’t rain today. 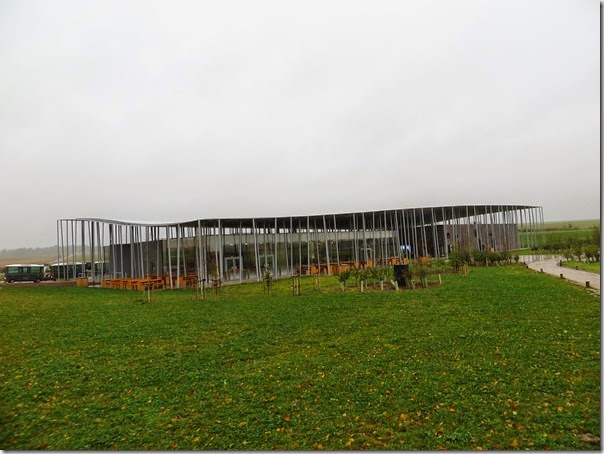 Stonehenge! But the stones are far skinnier than I imagined they would be. Okay, so it is just the new visitors center, but it certainly is an interesting design. 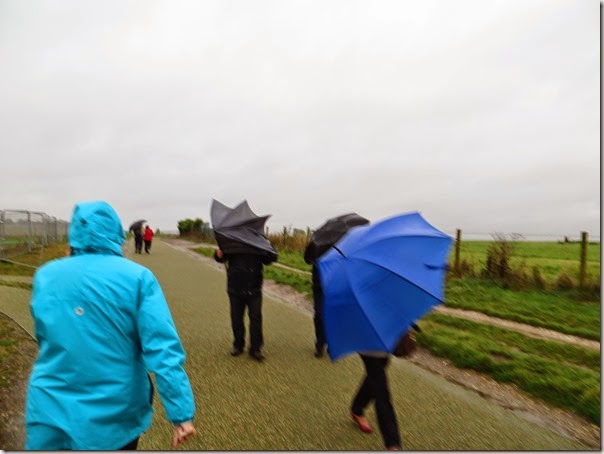 Walking toward the stones. Did I say the wind was blowing in addition to the fact the rain was coming down sideways. 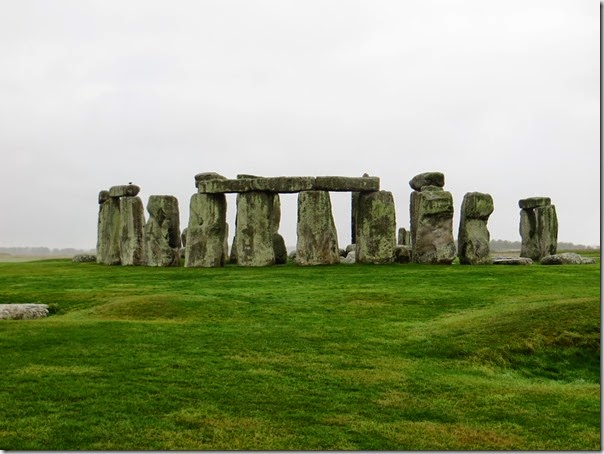 Yes, Stonehenge is for real. This was our second time here, the first time being five years ago when we took the sunrise tour that allowed us to walk among and touch the stones. Linda tried to book one this year, but we were too late in the season as they limit the number of months you can do that, and then to only one small group in the morning and one in the evening each day. And you really pay for that privilege. 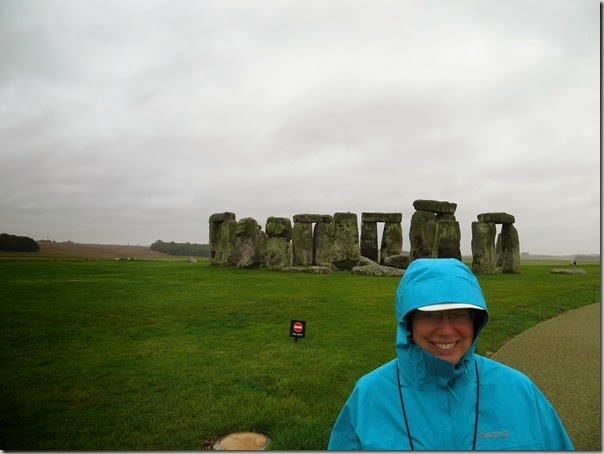 Bad weather, so what, Linda was still one very happy girl. 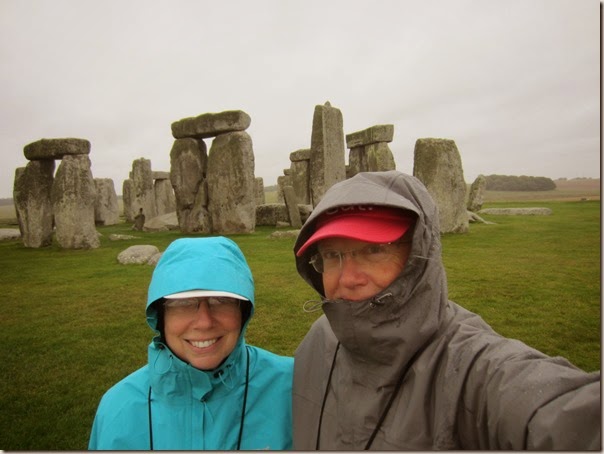 How could we go to Stonehenge and not take a selfie! 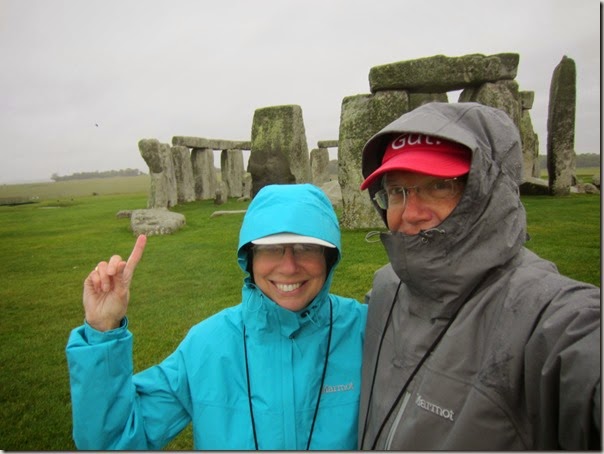 I really got a good laugh when I saw this one. Teenage bride? Almost 50 years later she’s still a teenage wife! 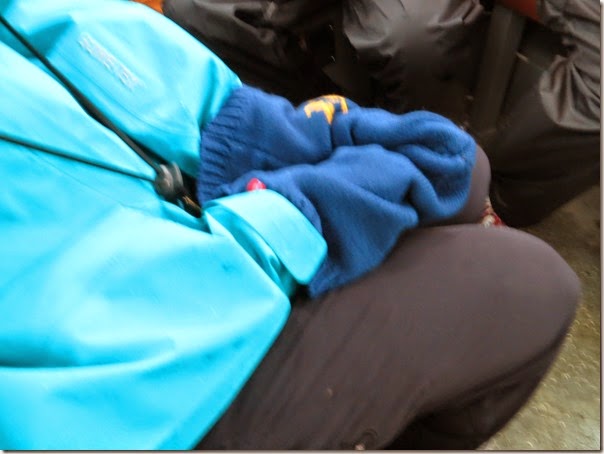 On the tram ride back to the visitors center I noticed her hands were really cold. Asking her where her gloves were she replied that she didn’t remember to bring them. That’s exactly how little kids are, and so I gave her my watch cap to put her hands in. I’ll bet the first thing she does when we get back to the hotel is to dig out her gloves for tomorrow’s tour of the Cotswalds. 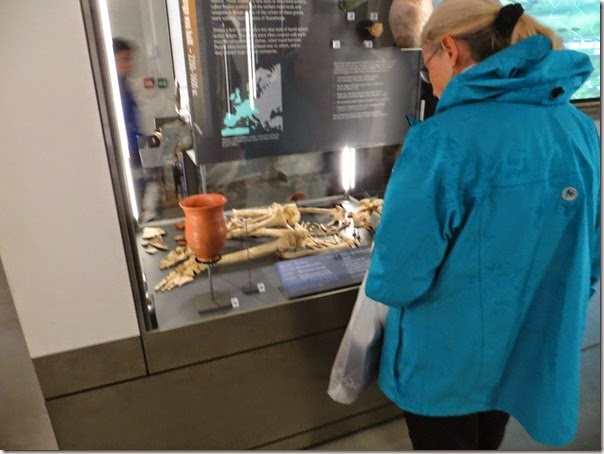 As you might guess, she found this “dead guy” in the museum, most interesting. 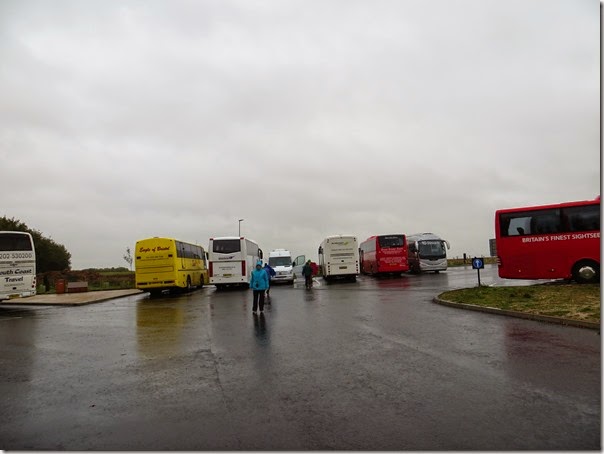 When we had arrived there was only one other bus in the bus parking area. When we left there were about twenty. Mike, our driver/guide said that in the summer they have overflow areas for buses, and that when the convoy of buses from the big cruise ships arrive you don’t want to be there. Rainy days may not be the best to see Stonehenge, but there there are no huge crowds either. 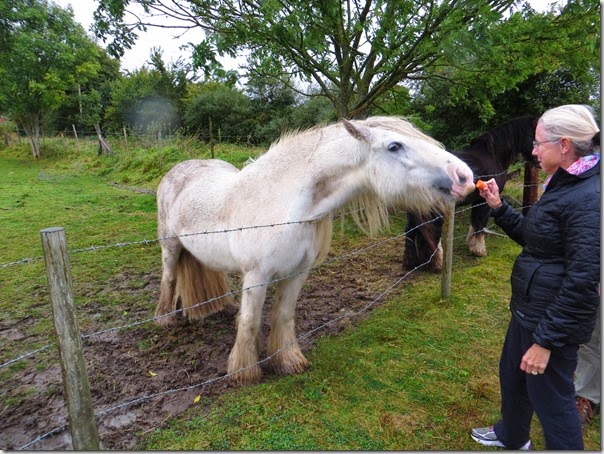 Linda feeding a Gypsy Horse. No carrots were dropped and no fingers were lost in the feeding. 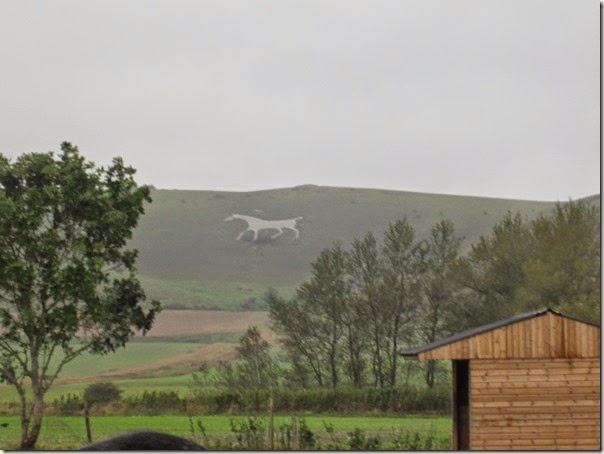 In the distance there is another white horse, this one being cut into the side of a hill. 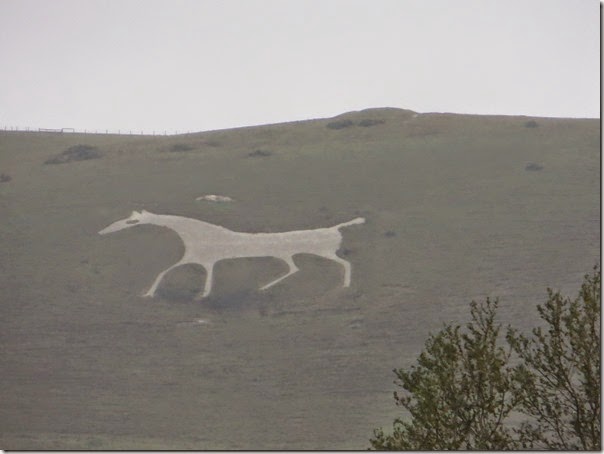 The weather made taking good photos impossible, but it is still easily seen. There are a number of them in the area and the white comes from the underlying chalk after the removal of the vegetation. Very interesting to say the least, and huge also. 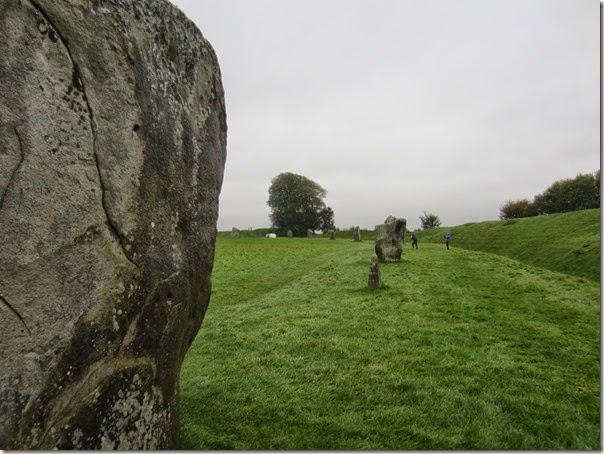 Avebury Stone Circle, a much bigger circle than Stonehenge, but also completely different. 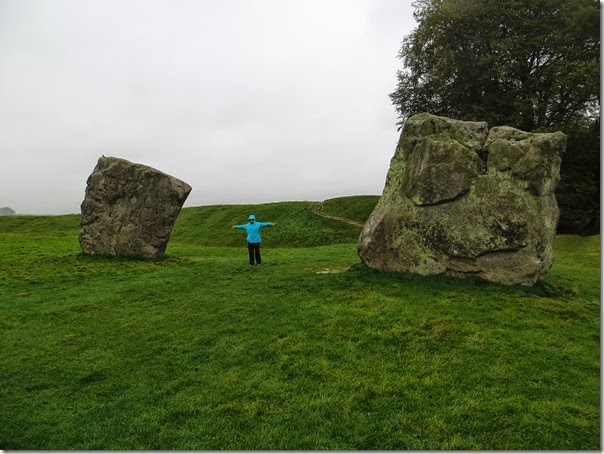 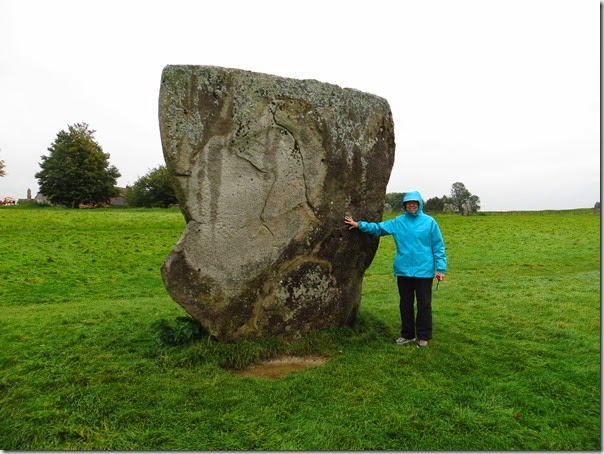 Some people touched the stones. 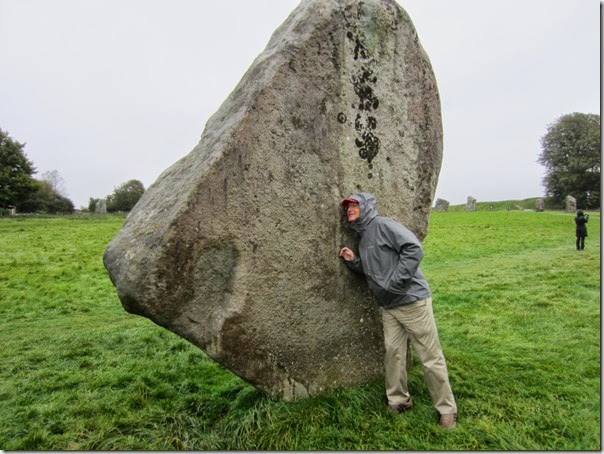 Others hugged the stones. 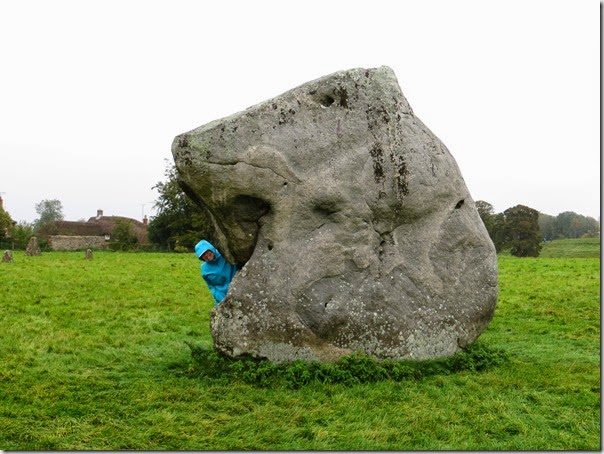 And the little kids played in the stones. 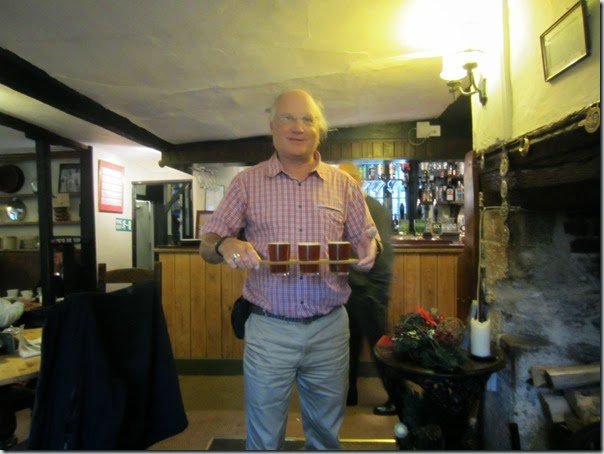 Lunch at the George Inn in Lycock where I had to try the three ale sampler. We had eaten breakfast her five years ago on our previous trip to the area. 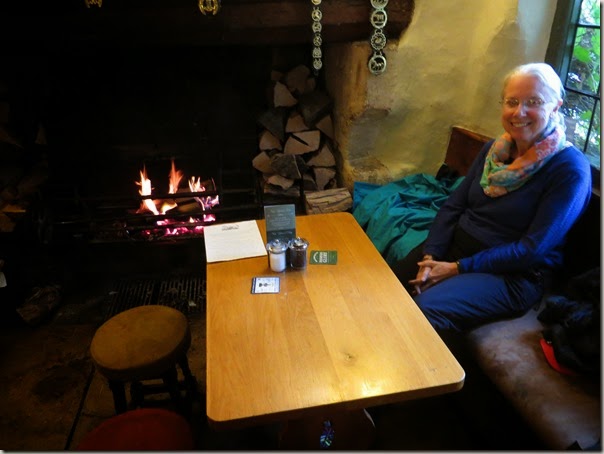 The best seat in the house, bar none, the one directly in front of the fireplace and dog spit. 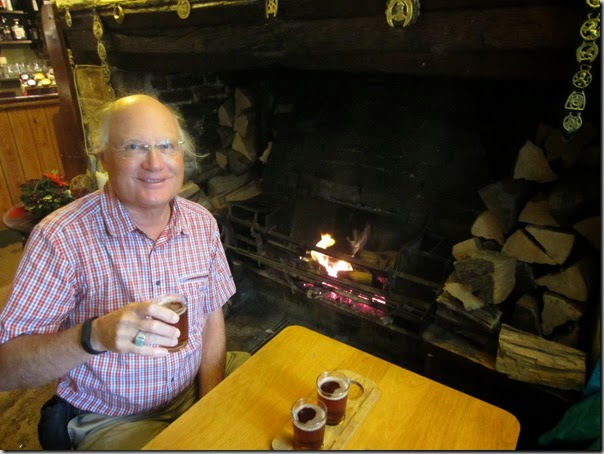 Yesterday I was saying I didn’t think we could get any luckier, and today we did. There is no way we should have arrived at the very moment this table became available, but it happened. This is double backflip, triple summersault awesome! 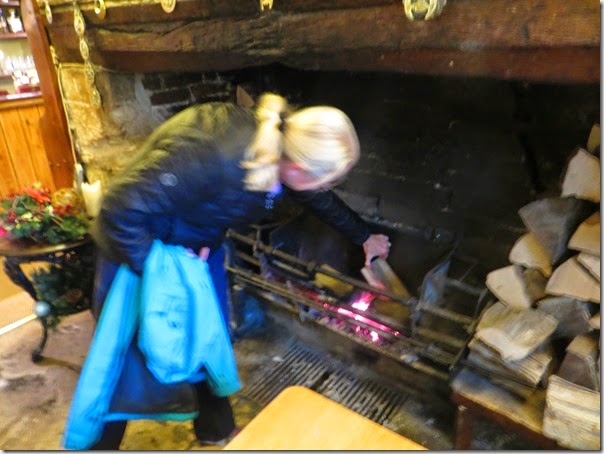 There is one task those who sit in front of the fire must do, and as we were leaving pyro-mom did it, adding a log to the fire. Not only did we get warmed up, we had great food and drink sitting at the best table in an inn that dates back to 1361. I know I’ve said this a number of times during our time in Europe, but really, truly, it doesn’t get any better than this. 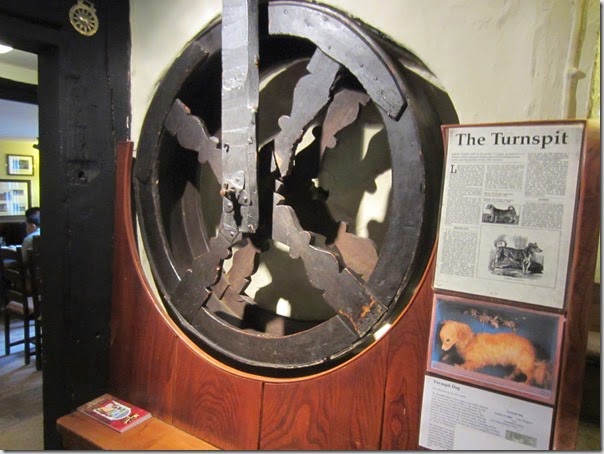 The wheel the dog walked in to turn the spit. A special breed of dog was bred to do this task, and they were called, surprise, Turnspit dogs. 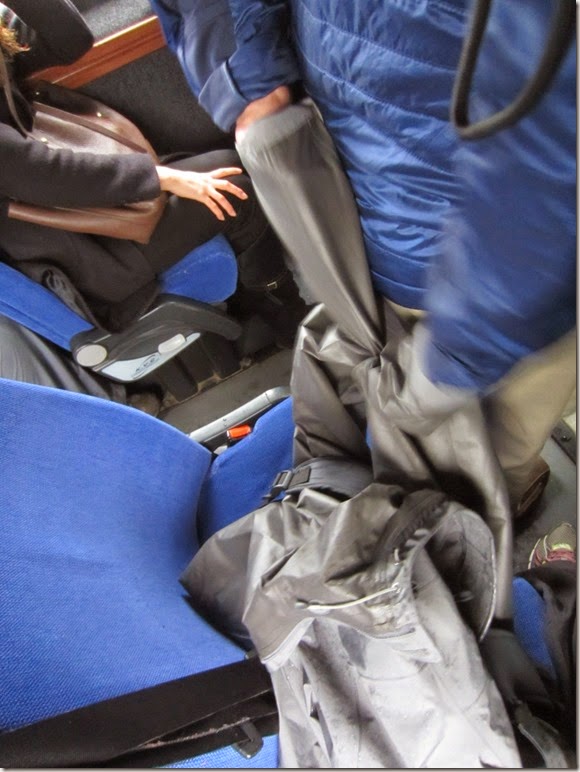 Linda’s husband with his hands trapped in his raincoat. She wanted to show a photo to another couple on the bus. I was in the process of removing my raincoat, and to make it easier I just slipped it off my shoulders, entangling it with the day pack I had on underneath it. The problem was I had the velcro cuffs on my raincoat sealed tight. Not good. After Linda showed the photo to the couple she came to my rescue. What a wife. What a dumb husband. 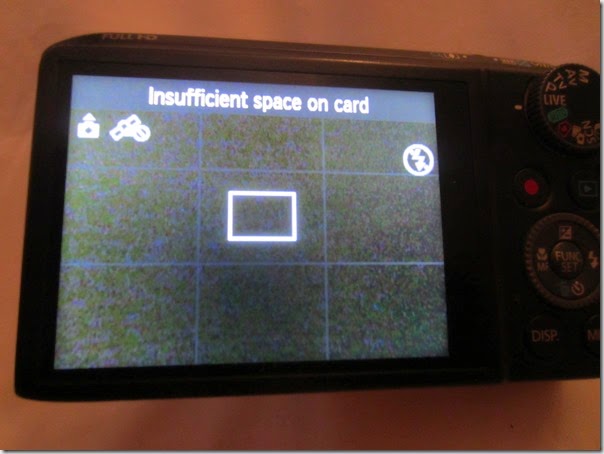 One other little problem I faced during the day. Once again Linda came to my rescue telling me, “That’s what the erase button is for.” Is she awesome or what? 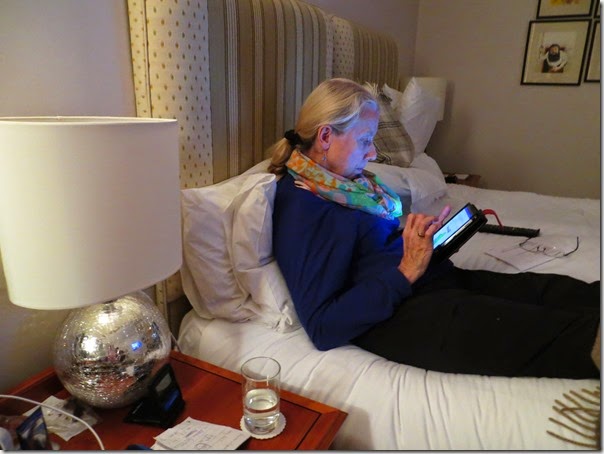 As you can see, helping me out of my various predicaments during the day had her exhausted by the time we returned to our hotel. Tomorrow should be interesting as it is supposed to also be a rainy day. What are the odds, the only two days in a row it rains all day long during our entire three months in Europe are the two days we have guided day trips. Rain, what rain, we’ll simply wear our raincoats and have a great time just like we did today. Life is what you make it.