Haven’t written for the past several days, so will try to catch up. Thursday is our last full day in Paris and we plan to visit a few places that we’ve had on our list but haven’t been able to get to yet. One interesting thing about our time in Paris, both during the tour and on our own, is how few places we visited that we have been to before. I think it is that blend of the old (Louvre, Saint Chapelle, Orsay, Rodin) and the new, and most especially the apartment,  that has made our time here so great. As they say, We shall return. 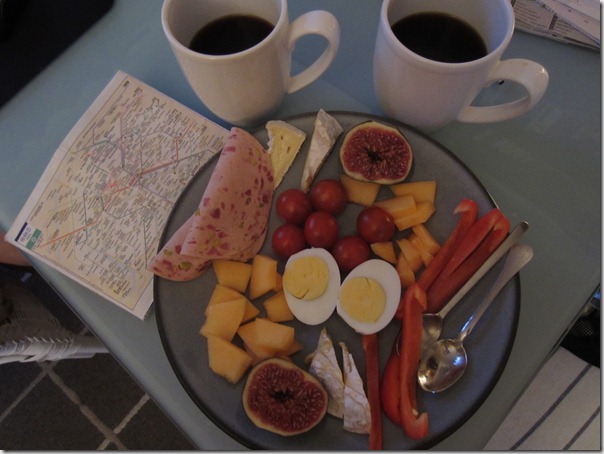 Nothing like a good breakfast and a map of the Metro to get the day started right. 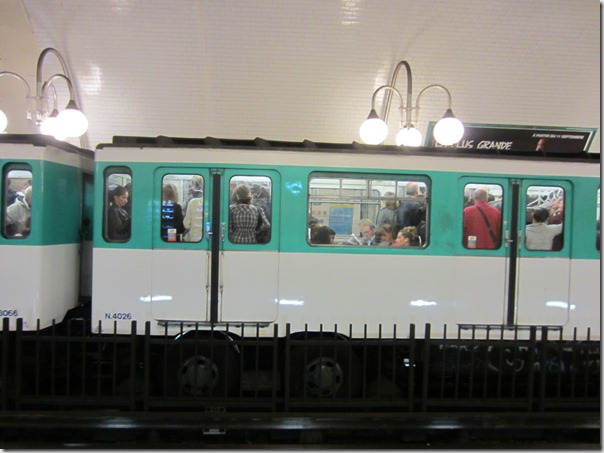 Then it was a trip on the Metro to our first stop. Linda always smiles when the Metro cars are packed, and we had several chances for to get a big smile in, what with the transfers between lines we usually have to make. 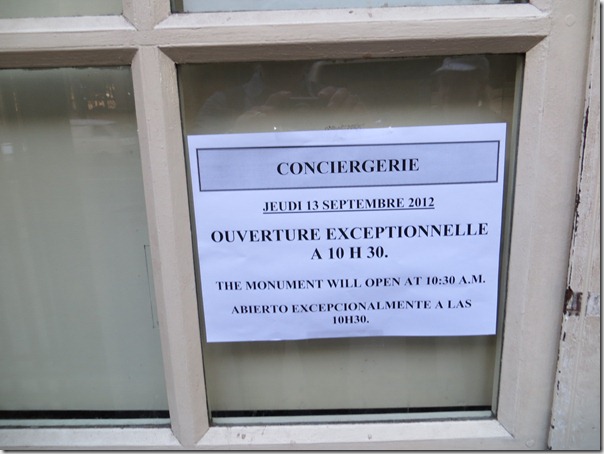 Bummer. We had picked this to see first because it opened at 9:30, a half hour earlier than the other places we wanted to see. 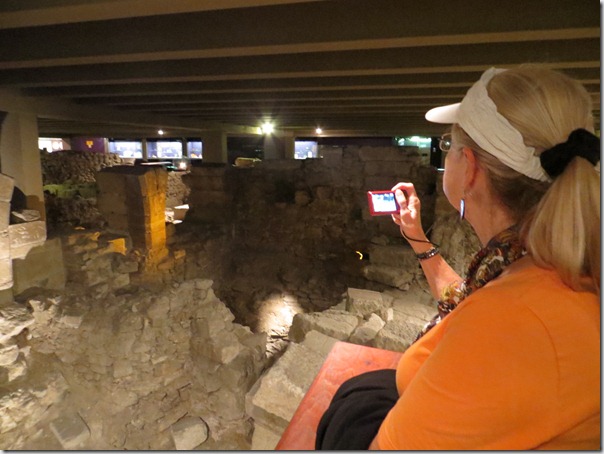 So we walked up towards Notre Dame and visited the Roman and medieval ruins that are underground in front of the church. For someone who couldn’t tell a Greek god from a Roman god, Linda sure does enjoy Roman ruins, even if there isn’t much to see.

Then it was back down to the Concergerie to see where Marie Antoinette was held before she was beheaded. They have this cell with a black robed figure in and when you are their you think this is where she was held. Turns it it is just like the room where she as held but the actual room was greatly enlarged and turned into a chapel after the Royals were back in power at a later date. (Or something like that.) 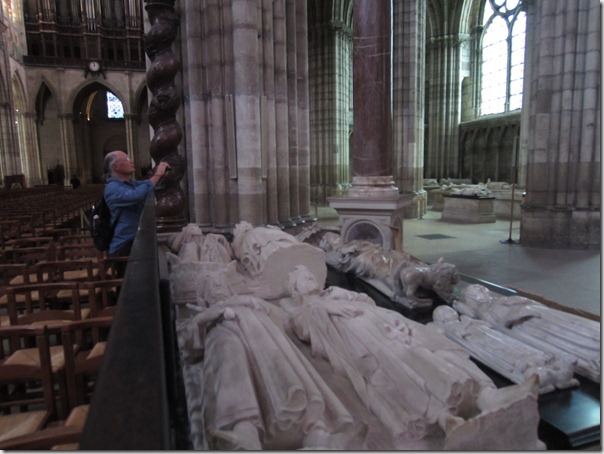 Linda likes to say, “Life’s tough, and then you die.” In a way that summed up are next stop. A very long Metro ride north was a church where most of the Kings and queens of France were buried. That’s the die part, As for the tough part, their lives weren’t tough at all, maybe except for the way Louis XVI and Marie-Antoinette met their end. The tough part turned out to be that the crypt section of the church where all their horizontal statues were located was closed today because of “technical  hitches”. We still got to see a few of them over the railings, but Louis XVI and Marie-Antoinette were somewhere in the back and we didn’t get to see them. 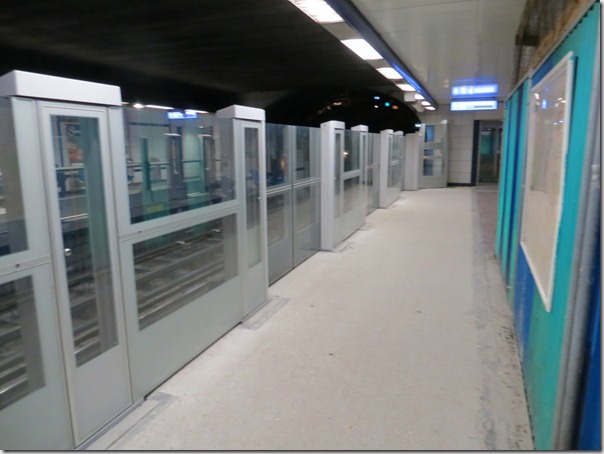 Then just when we didn’t think it could get any worse, it did, at least for Linda. I took this photo in a Metro station, but there is no Linda.  At the station where the Church had been, Linda didn’t make it onto the train before the doors closed. As we pulled away I gave her the “1” sign, meaning I was going to do what we have told each other to do should we ever get separated on the subway, underground, Metro, Tube, whatever it is called. The rule is the person who got on the train will get off at the very next station and wait for the other to come on the next train.
To say Linda had a forlorn look on her face as I rode off would be a classic understatement. I say it was partly because we were separated and partly because the area of town where that Church was located looked like all the immigrants from France’s former African colonies had chosen to live there. Yet how different from America as they were nice and polite and helpful. Still, there was one very relieved husband when he saw Linda aboard the next train. Her first words were, “It worked, our rule worked.” Of course it did, and that was why we had it. 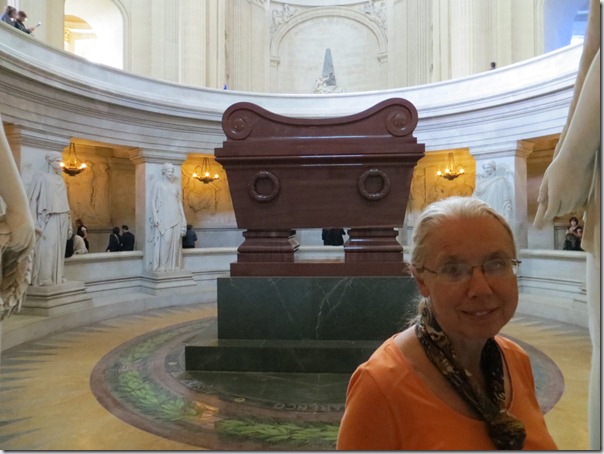 Our last stop of the day, another dead guy, only this time we got to see him with no problem. Or I should say we got to see Napoleon’s tomb with no problem. Linda readily admits to not being interested in history, especially French history, still the question lingered in her mind, why were these people all so important. That’s something that travel does, it gets you asking questions about things you never knew anything about. Now if I can only find an interesting book about France from about 1750 to 1850 when we get back to the States, we will both learn a little about French history. 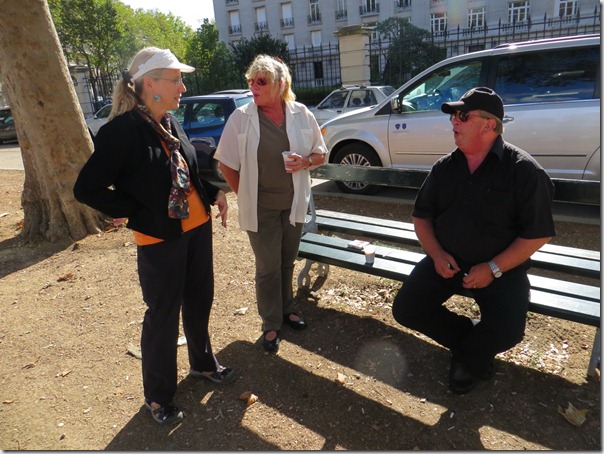 This one of those small world moments. As we walked down the steps from Les Invalides, Linda saw a bus that was from the same bus company that Rick Steve’s uses on his tours. Not only was it from the same company, it was Math and Annie, the drivers on our tour. We had a great time visiting with and thinking about how small the world really is. Consider that there are over 12 million people in Paris and here we had run into two people we knew. We almost stopped in a lotto store on the way back to the apartment. 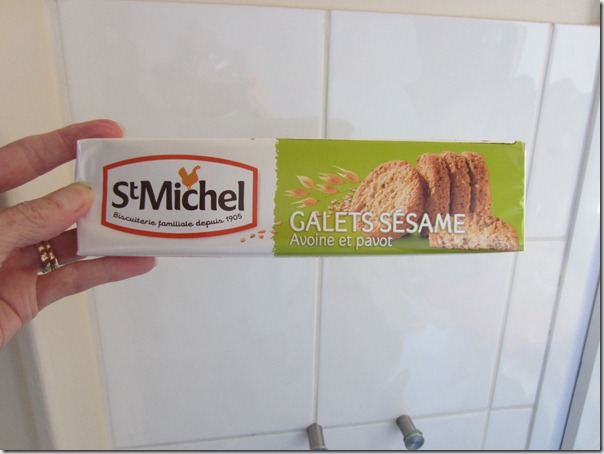 Everyone has a favorite memory of Paris and this is Linda’s. These are now her all time favorite cookies. It’s amazing how a package of cookies can make you feel great when things didn’t work out as planned during the day. And having a husband who turns down the cookie his wife offers him so she can eat the entire package is also pretty great. What can I say, Life IS Great.
Posted by Bob and Linda at 3:33 PM